The sinkage of 26th Street into the CSX railway last November wasn’t nearly as dramatic as the toppling of the same roadway at Charles Street in 2014.

The earlier event catapulted trees and cars, iron fencing and a hapless light pole into a deep gully, burying the rail line and displacing a dozen families living just feet away from the “wall-slide.”

None of that happened when the wall buckled two blocks to the east last year. Nevertheless, the latest topographical disturbance on 26th Street is set to cost taxpayers more.

Last week, the Board of Estimates slipped through, without comment or explanation, a $10 million supplemental appropriation to the Department of Transportation.

DOT has since confirmed to The Brew that $7.5 million will go to pay for the new wall under construction at 26th Street between Calvert Street and Guilford Avenue.

The remaining $2.5 million will pay for cost overruns in the agency’s snow removal budget – a 40% increase over FY18. “There were a larger number of wintry mix events this year,” DOT spokesman German Vigil explained. 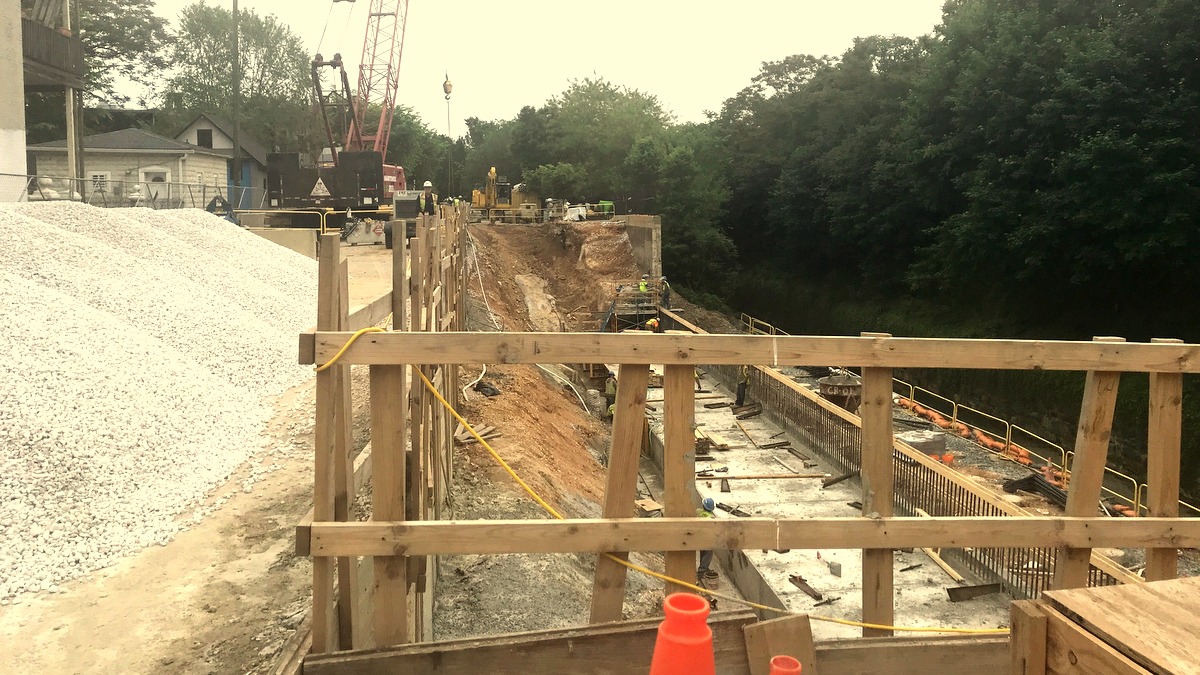 A bulky concrete foundation is being constructed to hold up the wall that will prop up 26th Street. The CSX line, not visible, is to the right. (Mark Reutter)

Getting back to the collapsed walls: the cost of rebuilding 26th Street between Charles and St. Paul streets in 2014 was split 50-50 by CSX and the city, or $6 million each.

The reason for the cost sharing was this: While the street was public property, the wall that tumbled down was originally built by the railway as part of a planned (but never constructed) train station at Charles Street.

The situation at 26th Street between Calvert and Guilford is different.

CSX owns the lower wall that parallels the track, but steadfastly claims that the upper wall that bulged out and sank last November is on city property.

While not officially conceding the point – “we are still in discussions with CSX over the cost sharing of the wall, if any,” City Solicitor Andre Davis said yesterday – the Young administration, through the BOE, is assuming the full cost of construction.

Precautionary inspections and a repair fund that DOT promised in 2014 never happened.

DOT says that it expects to have the wall completed by the end of summer and ready for installation of a new roadway in September.

It also hopes to have a “protocol” developed for inspections of CSX’s other retaining walls throughout the city.

DOT promised to do the same thing after the 2014 collapse.

In a MOU signed by then-director William Johnson, the agency vowed to establish an Emergency Infrastructure Fund to pay for precautionary inspections and repairs of CSX properties “in the interest of public safety.”

DOT internal documents, obtained by The Brew through a Maryland Public Information Act request, showed that only one wall inspection was ever performed by the agency.

It occurred in May 2014, about two weeks after the first wall collapsed.

Ground penetration radar tests found “no major anomalies” along 26th Street that would warrant further inspections by the city, the report concluded. 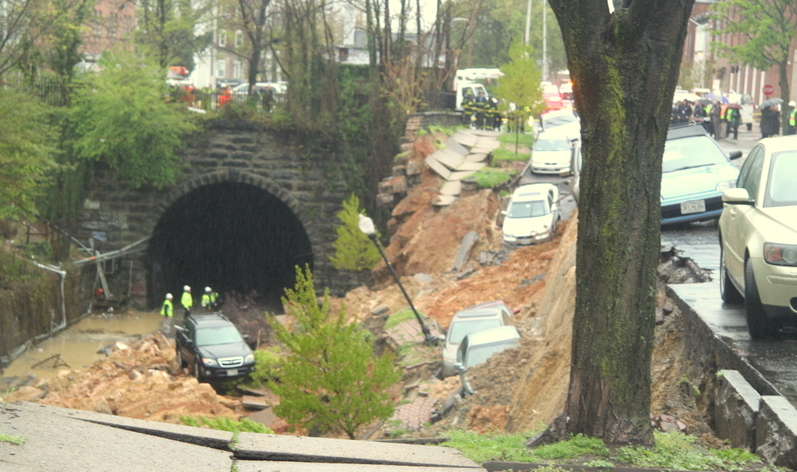 Cars and trees and a light pole (but, fortunately, no children from nearby Margaret Brent Elementary/Middle School) slid into the CSX railway when the unit block of East 26th Street suddenly collapsed on April 30, 2014. (Fern Shen)

Fast-forward four years: Early in the morning of November 26, 2018, a CSX track inspector found the concrete wall between Calvert and Guilford swaying and shifting before his eyes.

Other alarms were sounded by local residents, who noted that the sidewalk next to the wall was sinking fast and the curb had pulled away from the street.

Railway and city crews rushed to the scene and managed to stabilize the structure before it fell into the CSX right-of-way.

Early on November 26, 2018, a CSX track inspector found the concrete wall between Calvert and Guilford swaying and shifting before his eyes.

To this day, DOT says that there is no definitive cause for the wall’s sudden failure.

A record amount of rain had fallen during the month, which had saturated the soil under the street and put enormous pressure on the wall, said DOT deputy director Muhammed Khalid. (Heavy rainfall was the same reason offered for the 2014 collapse.)

While some speculated that the city’s installation of a new water line along 26th Street may have contributed to the collapse, DOT rejected the notion. “There was no sign the pipe was leaking,” Vigil said yesterday.

When contractors tore out the damaged wall, they found large amounts of silt had been washed away from the subsurface, leaving the roadway essentially suspended on loose soil and pockets of air.

Sooner or later, what was deemed free of “major anomalies” in 2014 would have collapsed.

Steel piles have since been rammed into the bedrock, and the lower section on the new wall has taken on the look of a medieval fortress replete with a broad concrete “wall walk.”

Over the next few months, a retaining wall will rise up from the base, and the 200 block of East 26th Street will be backfilled, resurfaced and returned to use.

A worker at the site said he is amazed by the amount of water that continues to seep through the subsoil and drain along the CSX right-of-way, which uses heavy pumps to disperse the water.

“You’re dealing here with unstable soil conditions. And where the water comes from, nobody seems to know – or really care. The whole push is get the damn wall built,” he said. 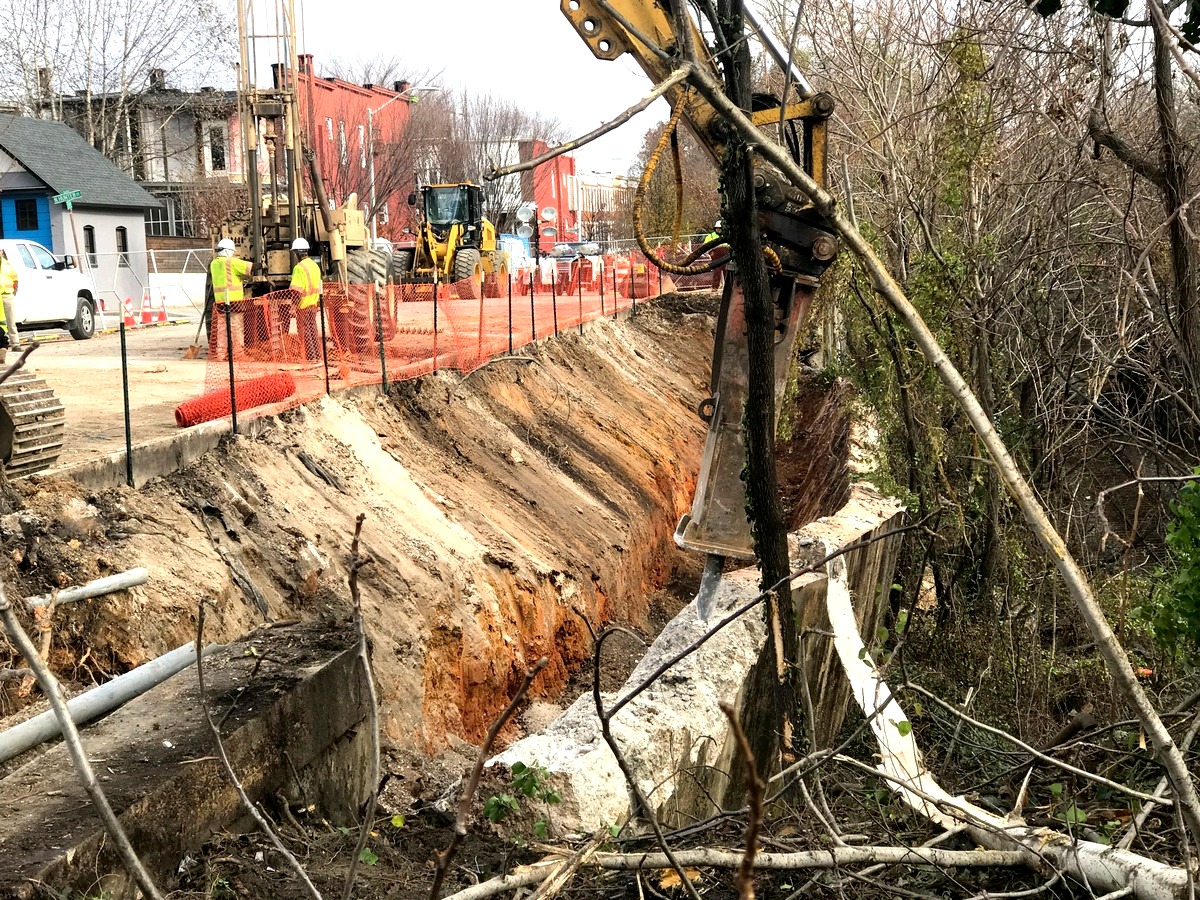 The buckled wall was cleared of debris after the sidewalk and roadway collapsed into it. (Mark Reutter, 11/27/18)