The line to vote in the Baltimore Teachers Union (BTU) election stretched out the door and curled onto the sidewalk along North Calvert Street.

Ebullient and highly visible in their red tee shirts, representatives of a coalition hoping to unseat existing leadership were everywhere yesterday outside of the Dallas F. Nicholas Sr. Elementary School polling place.

“It’s unbelievable. In 12 years of being involved in these elections, I’ve never seen so many people,” said Diana Desierto, a speech language pathologist at Cecil Elementary who was running for one of the positions on the Union We Deserve slate.

Meanwhile at the far end of the block – standing alone – were two people representing The Progressive Caucus, the slate headed by Marietta English, the BTU’s president since 1998.

“We are experienced. We don’t just jump out there and think because you’re young you can take over,” said a union official named Gloria, who declined to give her last name to a reporter. 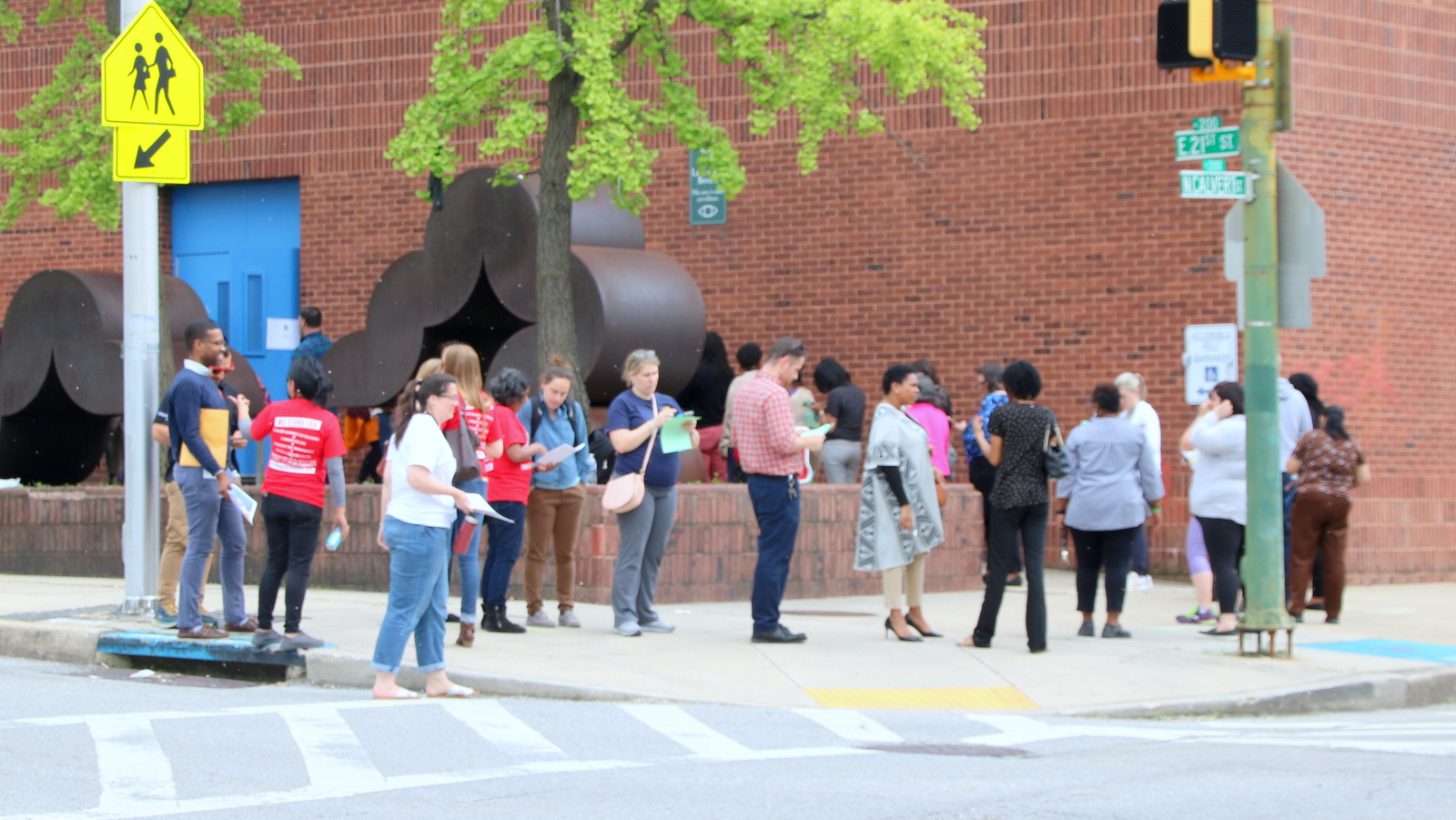 “Experience matters,” she continued, praising incumbent leadership for securing good pay and health benefits for members while declining to name the middle school where she teaches.

The scene was emblematic of the preliminary results announced hours later:

English was defeated – 901 to 839 – by Diamonté Brown, the candidate at the top of The Union We Deserve slate.

The situation today, following a heated campaign where both sides alleged electioneering improprieties, is also emblematic of the past few months:

English has cried foul and is challenging the preliminary results.

“Throughout this campaign, there were egregious violations of the elections process,” she said in a media release. “I can’t in good faith concede this election.”

Asked about the process for dealing with challenges, a spokesman for English said, “I do not have the specifics yet.” 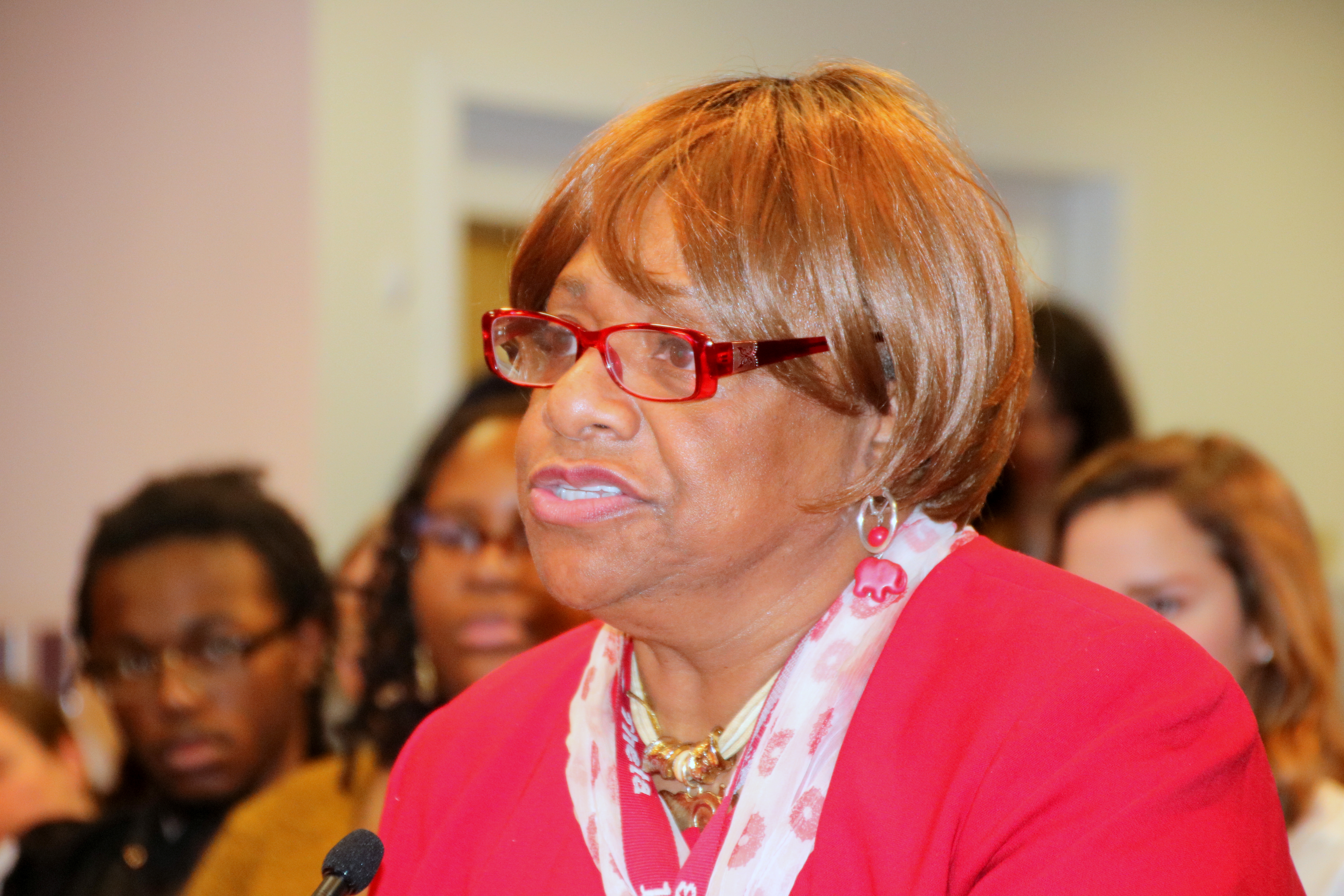 In 2017, BTU President Marietta English called on school board to find funds to prevent cuts that would cost jobs. (Fern Shen)

Under the rules, English has 48 hours after the vote tally to file a protest in writing.

The company that conducted the election, Elections USA Inc., would then review and decide on the request for a new election.

Corey Gaber, a member of Brown’s slate who won one of the 20 spots on the BTU’s Teachers Chapter, said the group is confident about surviving a challenge and focused on the future.

“As a result of this vote, we assume power, we are the ones now running this union,” said Gaber, a teacher at the Southwest Baltimore Charter School. “We appoint the elections committee.”

Active on social media and increasingly visible as the election approached, The Union We Deserve group has been charging that the BTU has attempted to suppress the vote.

A Patterson High School teacher, for instance, said he requested an absentee ballot because he had to be on a field trip with his son’s class. He got a rejection letter the following day.

“This was, like, the fastest response I ever got from the union on anything,” he said in an online video he and other teachers made.

“I feel really disenfranchised,” said another teacher on the video, who had asked for an absentee ballot because he had to conduct standardized tests the day of the election.

During  yesterday’s vote, witnesses told The Brew that some BTU members instructed voters to choose English and referred to Brown’s slate as “the opposition.”

Election observers were reportedly kicked out of the Edmondson-Westside High School polling place.

A major complaint was the configuration of the voting machines. They placed English’s slate at the start of the process, requiring voters to click past several screens to get to Brown’s slate.

“It’s the exact same thing people complained about in the past,” Gaber said.

Brown’s slate is a coalition of two groups that came together in the wake of that loss – the Baltimore Movement of Rank and File Educators (BMORE) and the Caucus of Educators for Democracy and Equity (CEDE).

“I’m looking for trust in leadership,” said one teacher. “And a sense of belonging.”

But Brown and her allies say English is out of step with teachers today.

“We want a union that listens to us the rank and file not just the executive board, not a top-down union,” Desierto said.

What issues the BTU has been out of step on?

Safety, for one, she said.

She and others described a number of priorities that extended beyond bread-and-butter concerns to social justice issues, racial equity, school conditions, and standardized testing. But nearly all  the voters in line yesterday came back to one issue:

“I want transparency,” Kevin Okun, an ESOL teacher from John Ruhrah Elementary who was standing on line to vote.

“I’ve asked for minutes of meetings and they tell me it’s not public information,” he said. “I want to know what they spend our money on. I pay more than $900 every year for dues.”

Asked what, overall, he was looking for as he votes for Brown and the others challenging the old guard, Okun thought a minute.

“I’m looking for trust in leadership,” he said. “And a sense of belonging.”