Last month The Brew disclosed that Baltimore City government almost lost its official website – www.baltimorecity.gov – not as a result of hackers or a fresh malware attack, but because it wasn’t paying its bills.

In addition to owing at least six months of back fees to the website host, the city also failed to renew its contract with the company, Interpersonal Frequency LLC.

Only through the intervention of the Finance Department did the city escape having its website go dark just days after hackers had infiltrated its computer network, shutting down email and other government functions.

To keep the city website going, the Board of Estimates has now approved a $96,600 payment to Interpersonal Frequency.

The transaction was part of the board’s routine agenda, authorized without comment by Mayor Bernard C. “Jack” Young and other panel members.

The item was listed in the agenda as a simple matter of “ratification and renewal” without any indication of the last-minute appeal by a city official to avoid a shutdown.

In 2014, New York-based Interpersonal Frequency was hired to redesign and host the government website. Eventually, the contract called for payments totaling more than $800,000.

Last fall, the city’s information and technology office, run by Chief Digital Officer Frank Johnson, decided to re-advertise and rebid the contract, but failed to do so, sources told The Brew.

At the same time, the office failed to extend the contract, which expired on January 16, 2019, and pay Interpersonal Frequency for its recent hosting services. 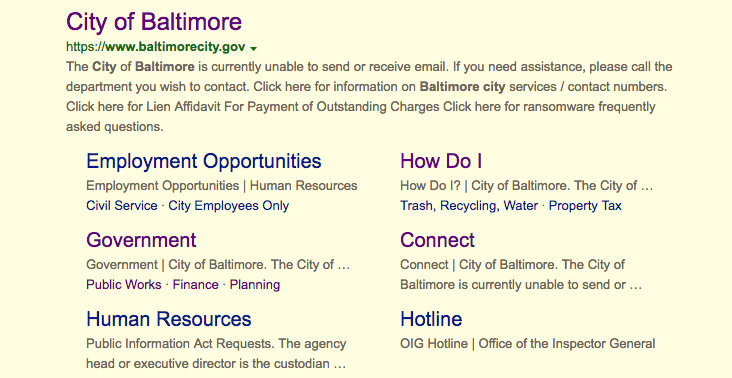 The baltimorecity.gov site is the key reference point for those seeking city services and information.

“Someone failed to pay the fees and didn’t do the paperwork for the Board of Estimates to extend the contract,” said a source.

Harish Rao, CEO of Interpersonal, confirmed that the company was seeking invoiced payments and a contract extension from the city.

City Solicitor Andre Davis, meanwhile, disputed the account of unpaid bills. He said the IT office was “in the midst of a vendor switch” when the malware attack occurred, and the attack thwarted the process of procuring a new vendor.

A Change of Plans

On Wednesday, the Board of Estimates, including Davis, approved an eight-month extension of the Interpersonal Frequency contract, plus two additional one-year options.

The lengthy time period “will allow for the continuation of hosting services” while the city “completes the evaluation of bids and later transitions into a new contract,” the agenda said.

Asked yesterday how the contact extension squared with his account of an imminent vendor switch, Davis said that “both things can be true.”

He elaborated via email: “It’s obvious. One can be ‘in the midst’ of something and later decide to do something other than what one was doing or about to do.”