Locked out by management and unable to do their job – making music as the Baltimore Symphony Orchestra – the players instead made noise outside the building today via chants and a megaphone:

Their artistic impulses, meanwhile, were channeled into the signs they brandished as they marched in a line outside their workplace, the Meyerhoff Symphony Hall:

The demonstration came on the first day that the players were locked out of the building by management, which has been unable to reach an agreement with the union representing orchestra members, Local 40-543.

“The BSO has no choice but to confront immediately its very serious financial issues to help preserve the organization,” the orchestra’s board of directors said, in a statement released last night.

“Years of substantial losses” have created an urgent need for the BSO to “change its business model,” board president and CEO Peter Kjome said, in the emailed statement.

Greg Mulligan, co-chair of the players’ committee, said management is crying poor and “we don’t buy it.”

“They say they have no money, but they have an over $72 million endowment,” Mulligan said, as cars passing by honked their support.

“People gave that money for the symphony,” he continued. “We are the symphony. What else did they give it for?” 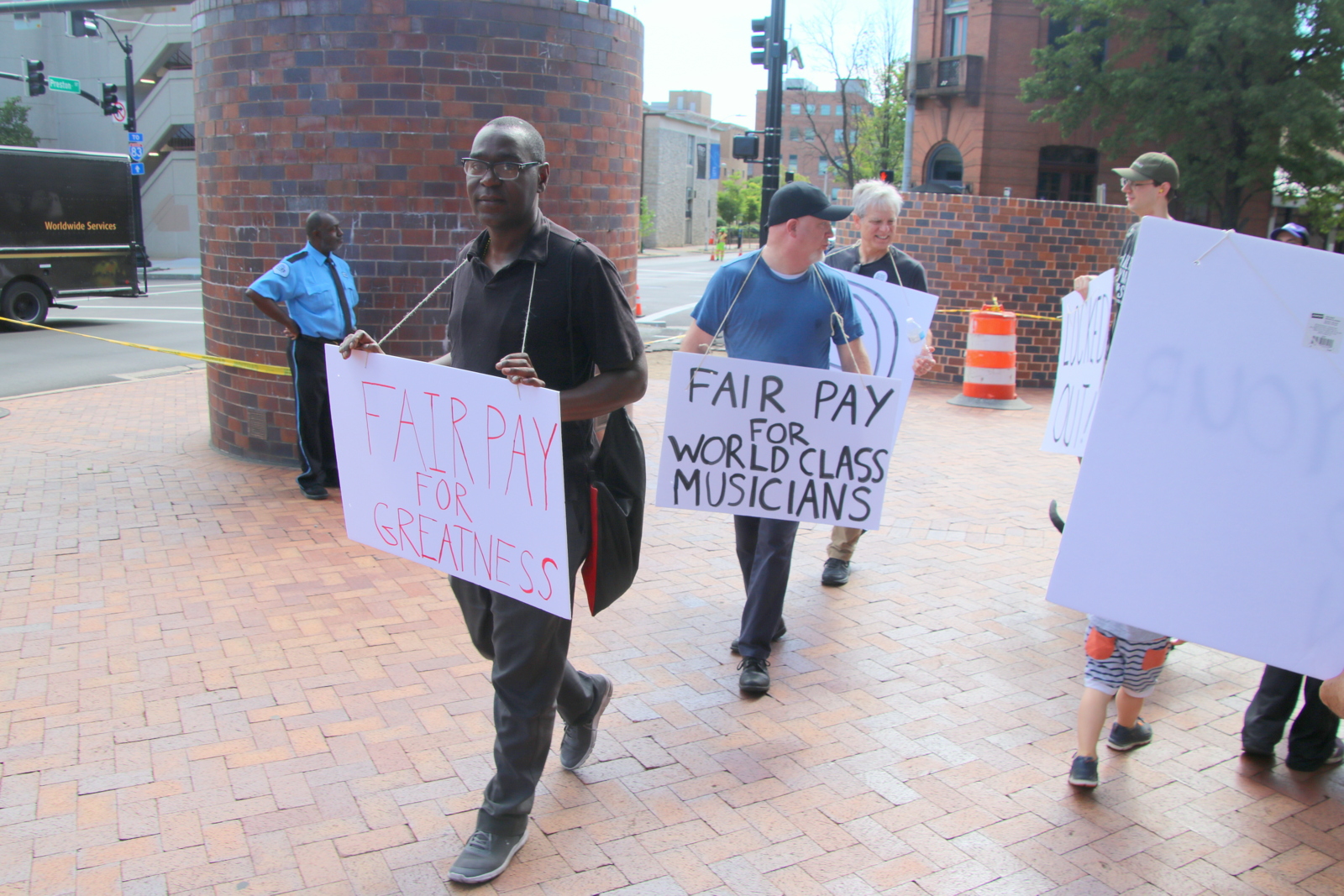 BSO musicians, who say their pay has not kept pace with inflation, are being asked to accept pay cuts. (Fern Shen)

Cuts in Pay and Health Benefits

The lockout and demonstration are the latest escalation of a conflict that has been simmering for months and boiled over on May 30 when management canceled summer concerts due to what it said was a $16 million loss in revenue over the past decade and an anticipated $1.5 million deficit this fiscal year.

Musicians were asked to accept a pay cut, a rollback of health benefits and reduction in their season from 52 weeks to 40 weeks.

Hogan: “We continually pour millions and millions of dollars into the BSO.”

Gov. Larry Hogan, called upon to release $1.6 million in funding set aside for the orchestra, has said he probably will not release the funding.

“We continually pour millions and millions of dollars into the BSO, but they’ve got real serious issues and problems with the management, with losing the support of their donor base,” Hogan said recently.

Stepping out of today’s demonstration, Mulligan said the players question management’s contention that the BSO cannot draw more from the endowment, which was placed in a separate trust in 2006.

“They’ve use the term ‘deficit’ very misleadingly over the years,” he said. “Annual operating deficits are caused most years by the fact that they don’t take enough of an endowment draw.” 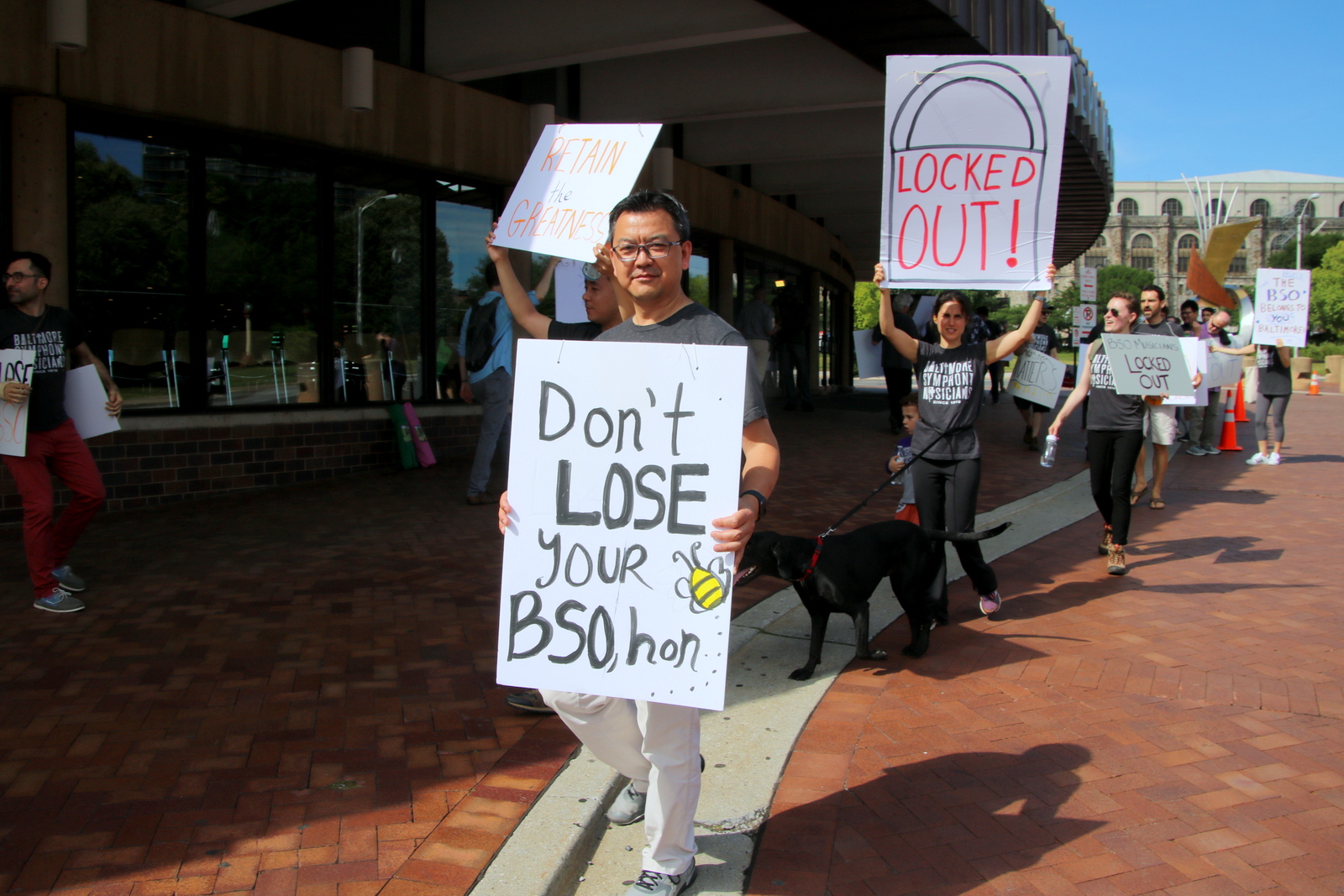 Musicians call for public support after the Baltimore Symphony Orchestra locks them out. (Fern Shen)

Along with members of the orchestra, others turned out to lend their support today, including Leslie Greenwald, past president and treasurer of the Handel Choir of Baltimore Board of Trustees.

“Arts organizations are going under all over the city – we’ve got to save this one,” said Greenwald, who was standing on Cathedral Street holding a sign that said “Keep the BSO world renowned.”

“If you want to save money, the first thing to cut is not your product.”

Greenwald’s diagnosis of the problem with the BSO? Poor management by an administration that needs, itself, to be scaled back.

“They have a very large administration and an enormous endowment,” Greenwald said, noting that musicians have made multiple concessions in past contract negotiations.

“Why are the cuts always on the musician side?” she asked. “If you want to save money, the first thing to cut is not your product.”

Greenwald said it is management’s responsibility to “right size” its operation and not spend unwisely.

“I mean, a European tour is great, but not when you’re short on money,” she said, noting that the orchestra performed there last year. “It’s always going to be a money-loser.” 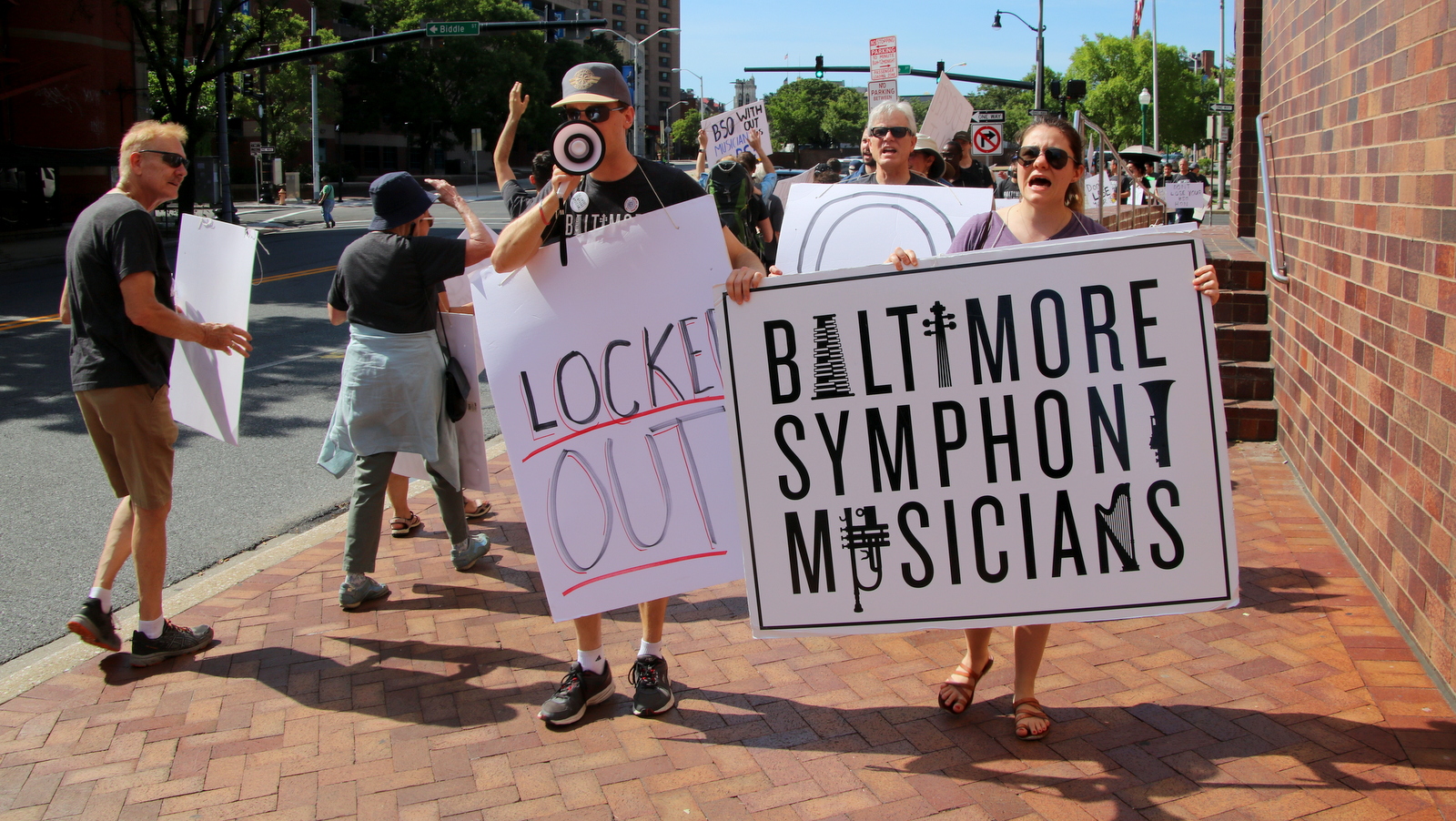 The morning after management announced a lockout, Baltimore Symphony musicians take to the street. (Fern Shen)

Mulligan said that while the BSO’s administrative costs have risen, musicians’ pay has “remained flat.”

With starting pay for orchestra members at “just under $83,000,” he said, BSO players’ salaries lag behind those of their peers in cities like Pittsburgh and St. Louis.

A violinist who has been with the BSO for 34 years, Mulligan said the lockout is going to hurt the players trying to make ends meet, paying off school loans or contributing to their children’s college tuition.

And when health benefits are cut off at the end of the month, he said, it’s going to be particularly hard on some members.

“We have one person who is pregnant and another who is receiving cancer treatment,” he said. “This is going to be devastating for some people.”

The other potential casualty, he said,  is the quality of the organization amid persistent reports of dire fiscal straits and clashes with management.

“They’re chasing away great players. We have 22 vacancies right now. Who is going to want to come when they hear about this?”