For days, the bicyclist hit by a truck on Falls Road in Hampden on June 17 was known officially as “a 52-year-old Baltimore man.”

Now that he has died of his injuries and been identified by police as Michael Hughes, it turns out he is a person anyone who frequents the intersection of Roland Avenue and Cold Spring Lane has seen many times.

Hughes, who struggled with drug addiction and homelessness, panhandled in the median there regularly, friends and family members say.

They also know what most passersby probably don’t – that he attended the Maryland Institute College of Art, for example, and was a skilled draftsman.

But even his mother discovered there was more to know about Michael Larry Hughes Jr.

At the hospital where he died last Monday, she learned from doctors that he was an organ donor.

“He donated his kidneys. and one kidney was successfully transplanted into a 70-year-old woman,” Katherine Saunders told The Brew.

“A plaque with his name is going to be hanging in a hallway at [University of Maryland] Shock Trauma,” Saunders said, with more than a touch of pride.

“He was a man at the end with nothing – no home, no worldly possessions – but as an organ donor he gave life to two people in need.”

That “Mickey,”  as family members called him, would do something so generous (he renewed his organ donor status in January) “encompasses my brother’s heart and soul,” said Daira Callahan, his sister.

“He was a man at the end with nothing – no home, no worldly possessions, nothing to offer – but gave life to two people in need, being an organ donor,” Callahan said.

“He always tried to give back because of how many people gave to him in his many attempts to find sobriety,” she recalled.

Saunders said she is still in shock after the crash, which police said took place at about 4:13 p.m. in the 3600 block of Falls Road.

Few details about the incident have been released. A police spokesman said BPD is working with the state’s attorney’s office to determine whether charges will be filed.

But the family has seen a neighbor’s security camera videos of the crash that show some of what happened when a Chevy Silverado pickup pulling a trailer collided with Hughes near the Hampden branch of the Enoch Pratt Library.

The Roland Avenue median “was his place to go. It really mattered to him to keep it clean.”

“The first video shows Mickey on the bike in front of the funeral home just past the first entrance of the funeral home going north,” Callahan said. “You see a black double-cab pickup truck with one of those cages landscapers use to haul their equipment pass him, but not a lot else.”

In the second video, she said, “you see the pickup this time, but not him until he is clipped, possibly by the mirror.”

“It completely turns him around in the air, still almost in a seated position, landing just in front of the rear tires, which all run over him,” she said, before the video abruptly cuts off, “for which I am grateful.”

Saunders said she hasn’t watched the video herself, but other family members have. And her conclusion from what she has heard is firm: 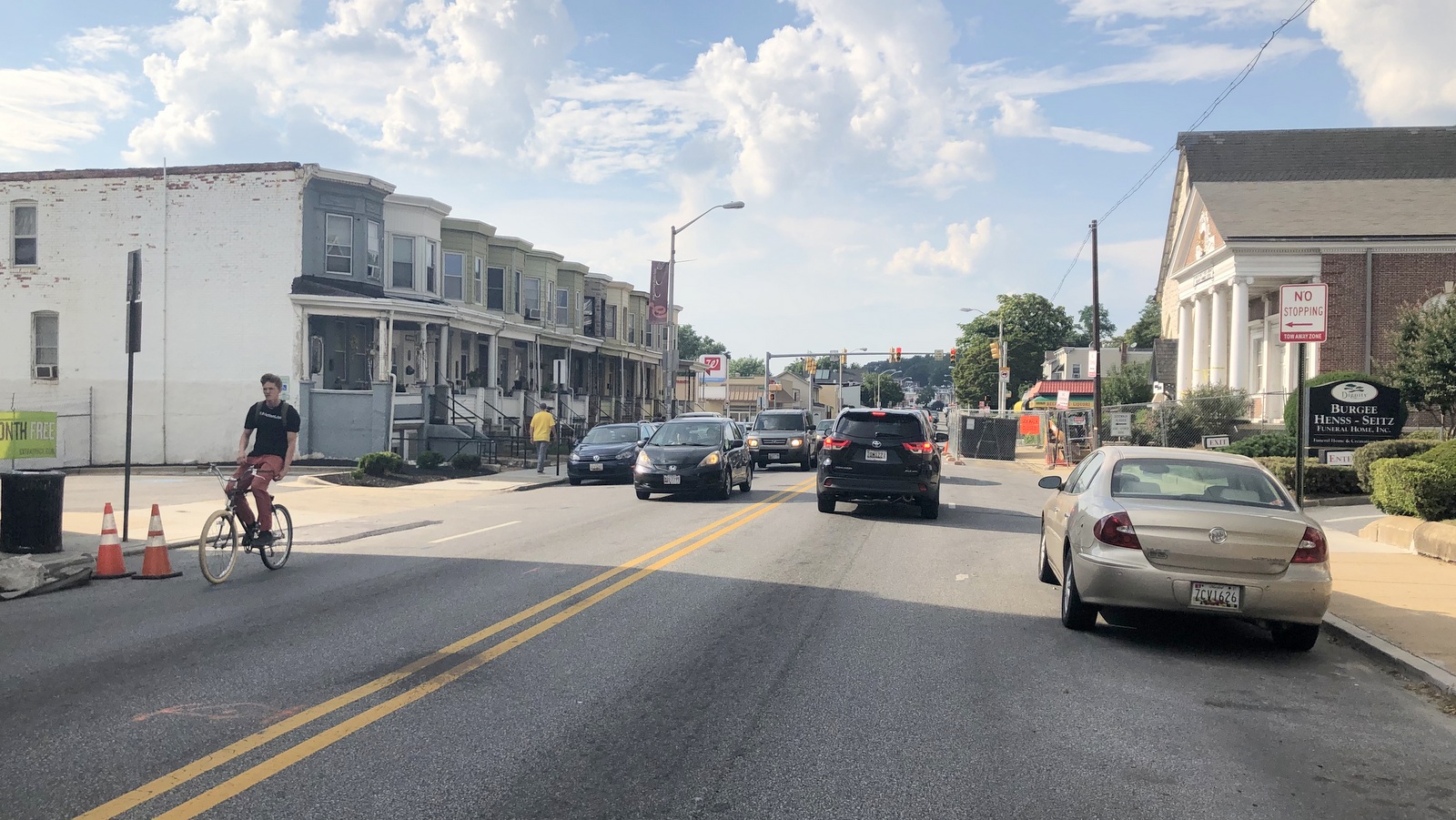 Police say the truck and Hughes collided in the 3600 block of Falls Road. Lots of late afternoon vehicle traffic was there yesterday. (Fern Shen)

Hughes grew up as part of a large family from Hampden, his mother and sister said. He played varsity football for Cardinal Gibbons High School, had two children and worked in Maryland and Virginia.

“He was an artistic plasterer, he worked with my father,” Saunders said. “He was very skilled.”

Over the years, family members struggled trying to help him get clean and get housing.

“He would call me Buddy,” she said. “I told him, ‘You can’t call me Buddy, I’m your mother. Get well and get out of the damn street!’”

“He never gave up trying to get better.”

“Mickey fought many demons throughout his life,” but remained strong in his religious faith and grateful towards those who helped him, Callahan said.

One of those friends was Nancy Lord Lewin, who said she met Hughes “through the local recovery community about nine years ago” and knew him as a generous and highly principled person.

“He was always a terrific friend and supporter for me, and I tried to do the same for him,” she said. “He never gave up trying to get better.”

The Roland Avenue median, she said, “was his place to go. It really mattered to him to keep it clean.”

A devout Catholic, he occasionally could be seen kneeling to pray in that median. “His faith was mind-boggling to me,” Lewin said. “He had a strong connection to his god.” 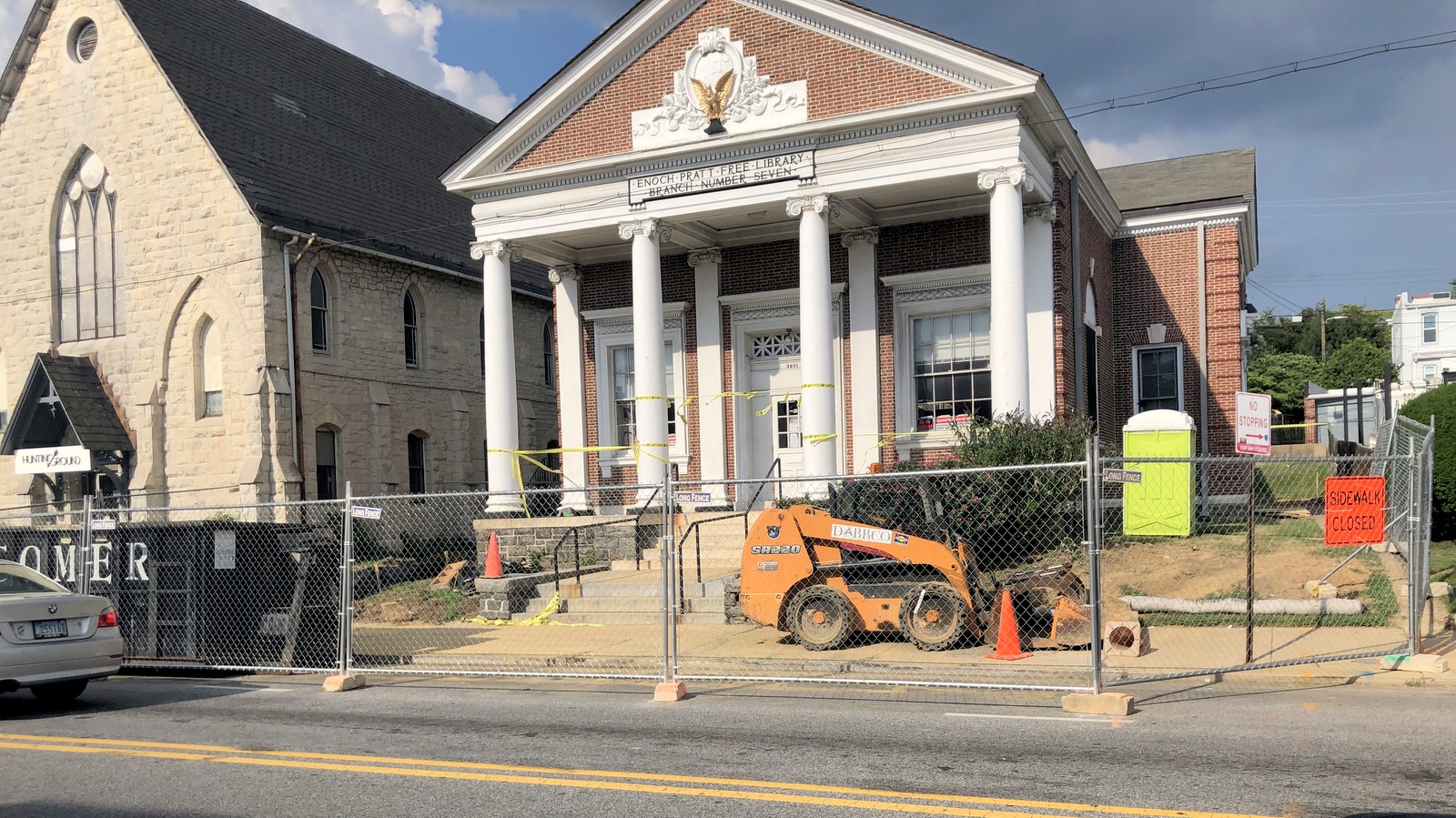 Construction work narrowed the roadway yesterday outside of the Hampden branch of the Enoch Pratt Library. (Fern Shen)

Encouraged by Lewin, people sent their love Hughes’ way “in the form of shoes, clothes, nourishing food and drink, comforting words and face-to-face talk and connection with him on the median,” she wrote on Facebook.

“Please know it all mattered, it all helped. He would tell me ‘A friend of yours came by’ and I could witness the uplift on his soul,” she wrote. “He was always humbled, always grateful.”

Hughes’ mother said her son “made just enough to keep himself going” and never complained about his lot in life.

With his mild demeanor and generous nature, Saunders said, “he knew so many people, he had so many friends.”

Her son had a sense of humor, she said, and would put it this way:

A mass for Michael Hughes is scheduled to take place on Monday (July 1) at 10 a.m. at St. Thomas Aquinas Church, 1008 West 37th Street (at the corner of 37th and Hickory Avenue) in Hampden.