A citizens group says evidence of sewage spewing out of a manhole last week at Lake Roland posed a health risk to park users and demonstrates the need for sewer upgrades in the area.

The “blowout” of Manhole 6883 west of the park’s dam represents evidence of what Green Towson Alliance calls a ticking time bomb – an aged and low-capacity sewer line that, running under Lake Roland and downstream to the city, is unable to handle runoff during and after heavy rainstorms.

“It’s only going to get worse,” says Roger Gookin, a retired sewer contractor and former utility association president who is a member of GTA.

He says the expansion of Towson University and construction of Towson Row, together with planned development at Bare Hills and Greenspring Station, will increase the pressure on an already inadequate sewer system in Baltimore County.

Gookin said he spied the stacked manhole – surrounded by baby wipes, condoms, exam gloves, plastic bags and other debris – in a wetlands area between the dam and a boardwalk used by children, hikers and dog owners to reach Lake Roland from the Light Rail parking lot off Falls Road.

The sewage was released, Gookin speculated, when the manhole cover was lifted off its base from the water pressure within the pipeline. There have been heavy storms in the Roland Park area, including last Tuesday.

He took photographs of the debris and damaged manhole and notified the Lake Roland Nature Council, the nonprofit that administers the park.

DPW: No Record of Spill

Jeffrey Budnitz, an officer at the nature council, confirmed that he talked to Gookin and said his group had notified the Baltimore County Department of Public Works of the sewer overflow.

As of this afternoon, however, DPW says it has no knowledge of the spill.

“There is some confusion at this point,” said spokesman David F. Fidler. “We had no complaint about the specific manhole mentioned at Lake Roland. We did have a nearby complaint on Woodbrook Lane that may have been confused with that. So we’re trying to sort this out.”

When The Brew visited the site today, the ground around Manhole 6883 was still saturated, plastic debris fluttered on nearby tree branches, and the area had a foul odor.

The manhole is located about 30 feet from the Jones Falls. Sewage appears to have cut through the brush to the stream, which flows another six miles through Baltimore City and empties at the Inner Harbor. 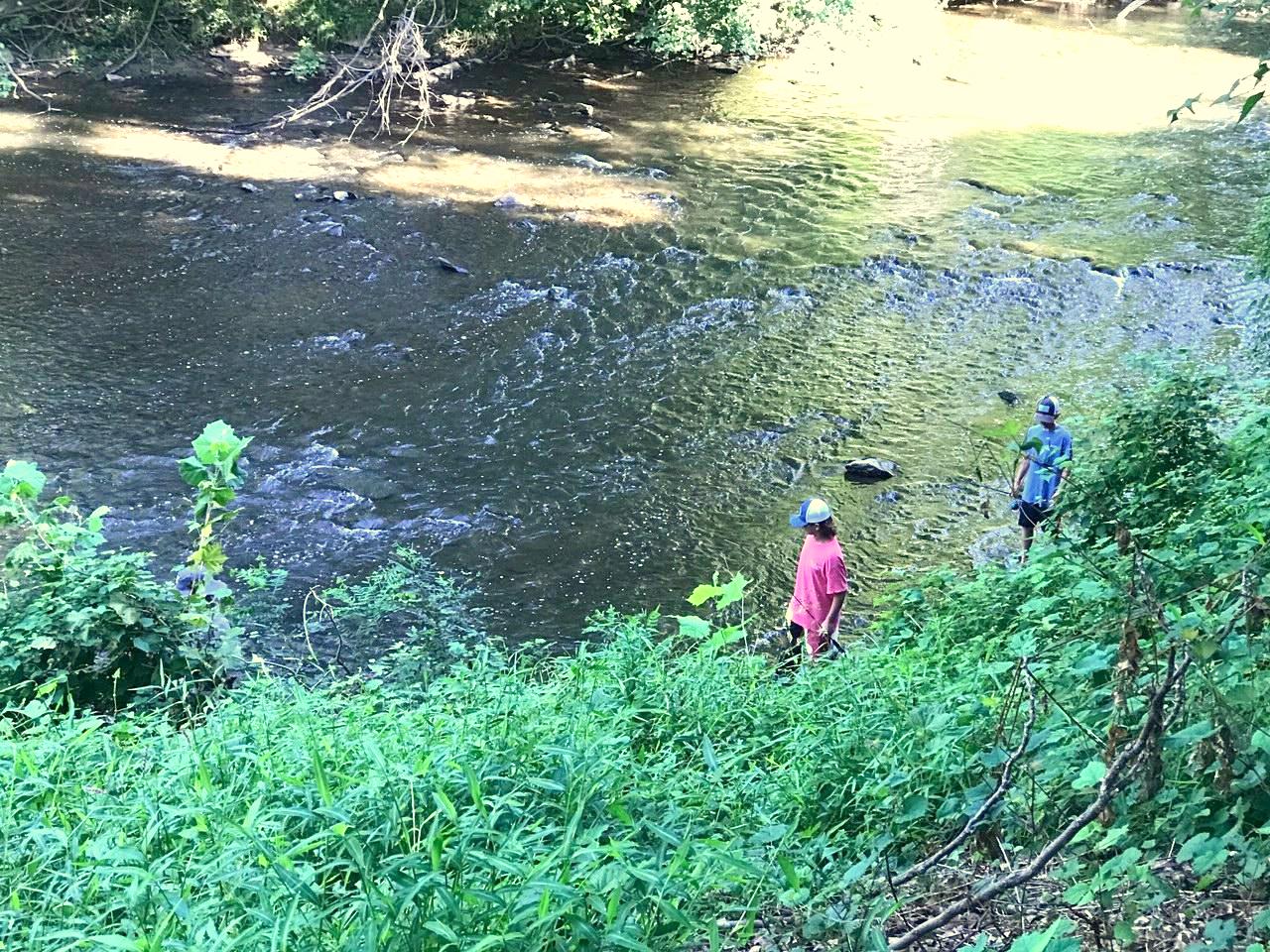 Two boys today wade along the Fallsway near the site of the spill reported by the Green Towson Alliance. (Mark Reutter)

According to Gookin, the sewage discharge took place at the very spot that a 2012 report by consultants Rummel, Klepper & Kahl predicted it would happen based on hydraulic modeling of the Upper Jones Falls Sewershed System.

During an intense storm, Manhole 6883 would overflow with an estimated 1 million gallons of sewage and stormwater, the report estimated.

The problem: Three sewer mains with a combined total of 96 inches of capacity join together into a single 42-inch pipe.

The report was prepared by RK&K as part of a consent decree by Baltimore County to end all SSOs (Sanitary Sewage Overflows) by March 2020.

Built in the early 1950s, that pipe runs under the lake and park to reach Baltimore City’s sewer line. 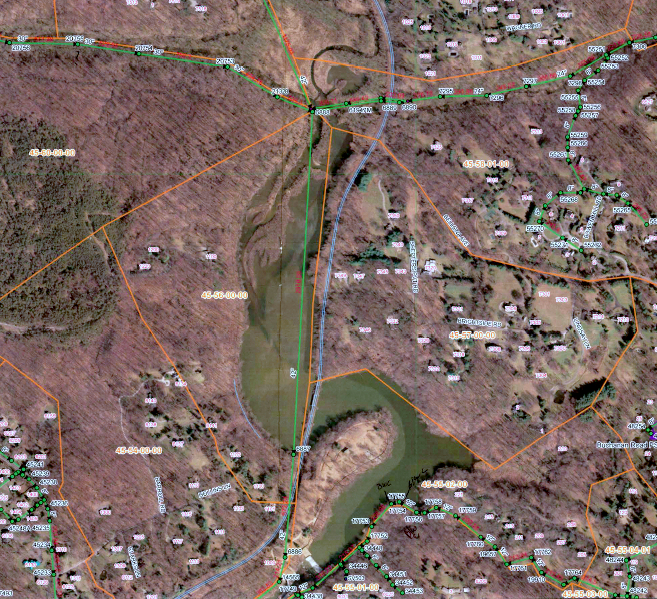 Three sewer mains – Roland Run, Upper Jones Falls and Towson Run (all in green) – combine at the north end of Lake Roland into a single pipe that runs beneath the lake and park. The sewer spill occurred below Lake Roland Dam at the bottom of the map. (RK&K, “Long Term Capacity/Peak Flow Management Evaluation Report for the Jones Falls Sewershed Hydraulic Model,” 2012)

RK&K recommended adding capacity to the pipe with a “relief” sewer as part of the county’s consent decree work, but that recommendation hasn’t been followed.

“Additional capacity would prevent sewer overflows for larger storms, like the ones Baltimore County is experiencing with greater frequency.

“The sewage debris seen on August 8 cannot be ignored,” the Green Towson Alliance said in a press release issued today. 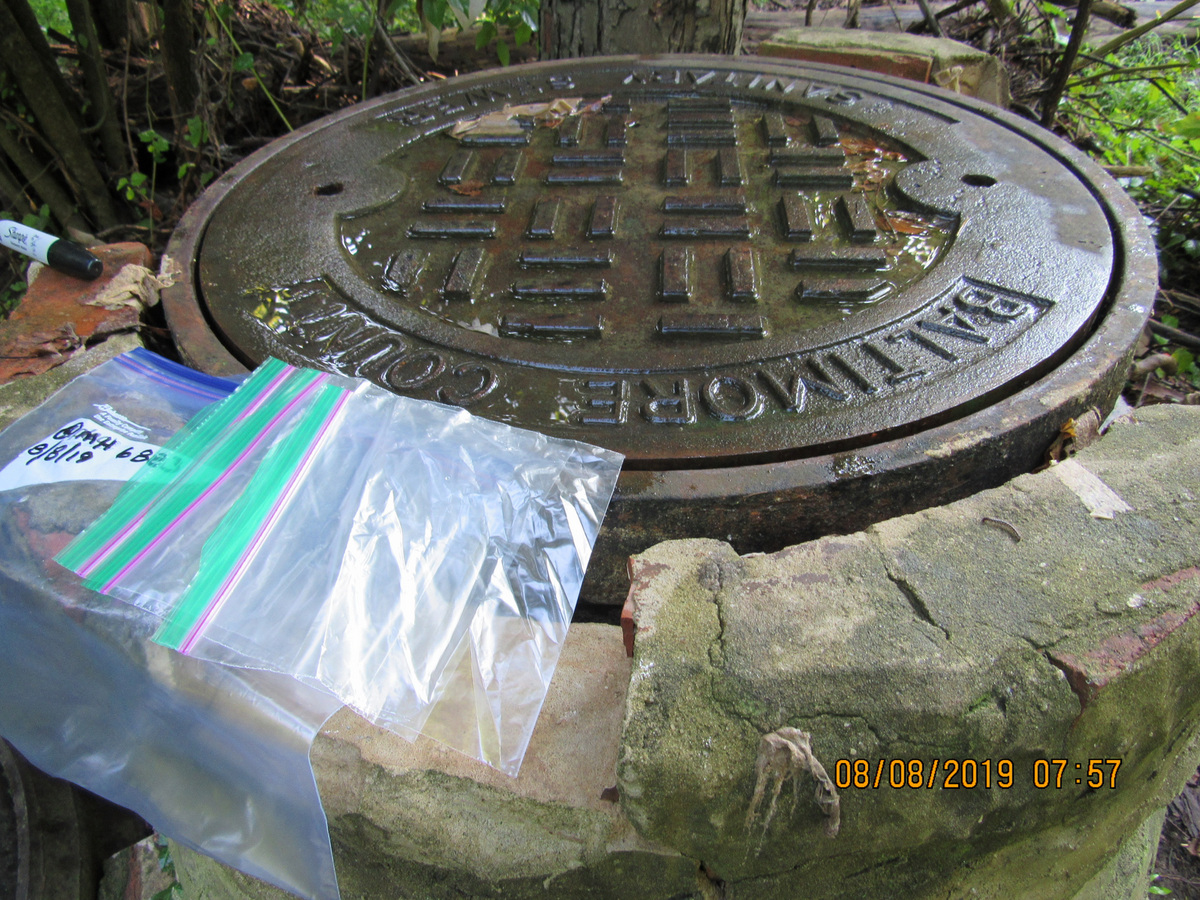 Last Thursday, Roger Gookin prepares to take samples of the debris he found on nearby trees and bushes near Manhole 6883, whose lid “blew” last week. (Roger Gookin)