County officials, however, say their quick action to replace the manhole’s missing bricks and clean up the site after a story in The Brew should not be taken as proof of any sewage problem at the park.

They say there was no sign of an “active overflow” that would have polluted the Jones Falls before the stream enters Baltimore City at Mount Washington.

Instead, the county believes that a “prior” overflow must have happened at the site – and the repairs made after the Brew story were part of a scheduled maintenance program. 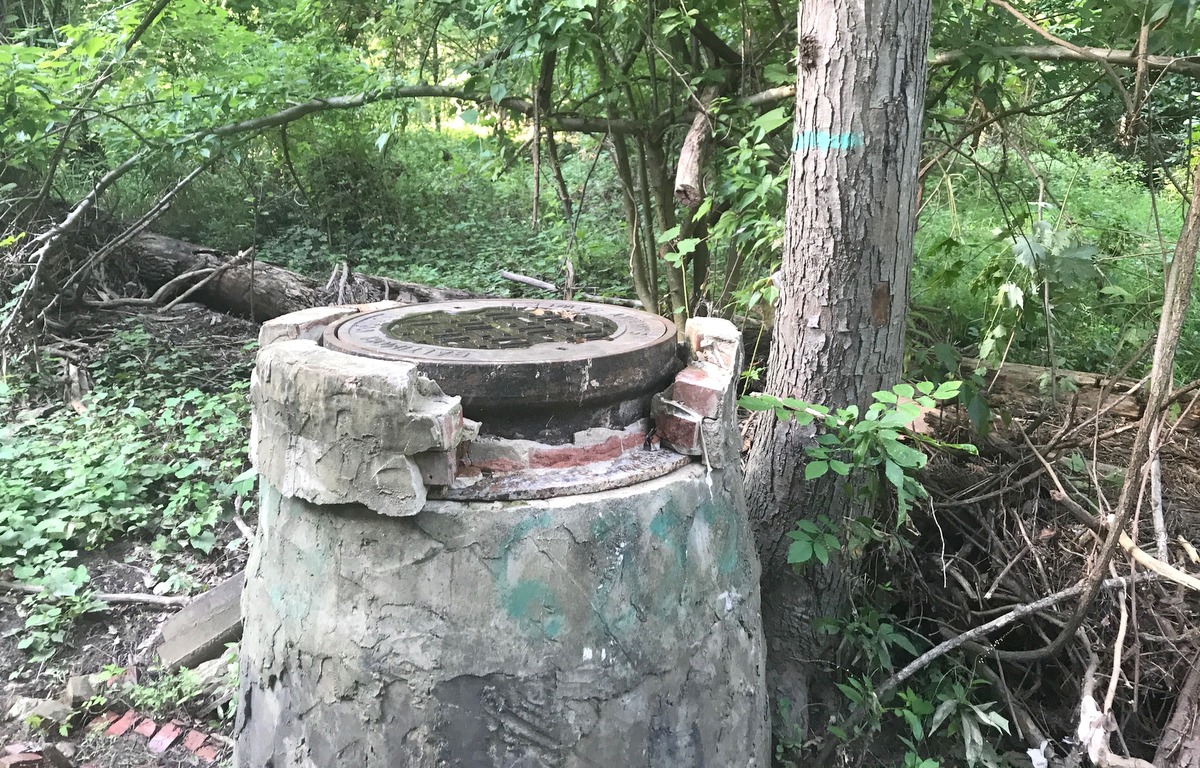 Manhole 6883 as it appeared last Monday (August 12) with missing bricks and a damaged manhole collar that the county says did not release sewage. (Mark Reutter)

On August 9, Green Towson Alliance described physical evidence of the sewage spill, which The Brew photographed in the vicinity of the now repaired manhole stack.

The citizen group’s evidence, however, was not “corroborated” by the utility crew that inspected the site, T.J. Smith, press secretary for County Executive Johnny Olszewski, said. (Lake Roland is owned by Baltimore City, but “operational control and responsibility” for the park is in the hands of Baltimore County.)

Meanwhile, an August 5 report of a spill at the same site – this time made by the Lake Roland Nature Council – was, in fact, a case of mistaken identity, according to Smith.

“That call was about a different manhole (one nearby, but not the same), and the report was about damage to the manhole” instead of a sewer overflow, he said.

“More double talk” is how Tom McCord, a longtime environmental activist who lives in Ruxton, described the county’s response.

The fact that no information was offered to the public about the damaged manhole until after it was “discovered by private citizens and publicized in the media makes you wonder if the county doesn’t want the people to know there are big sewer issues at Lake Roland,” McCord said yesterday.

He called the Olszewski administration’s response disappointing. “People were hoping since the election that Johnny O will be a change agent and do something about these problems,” he said. 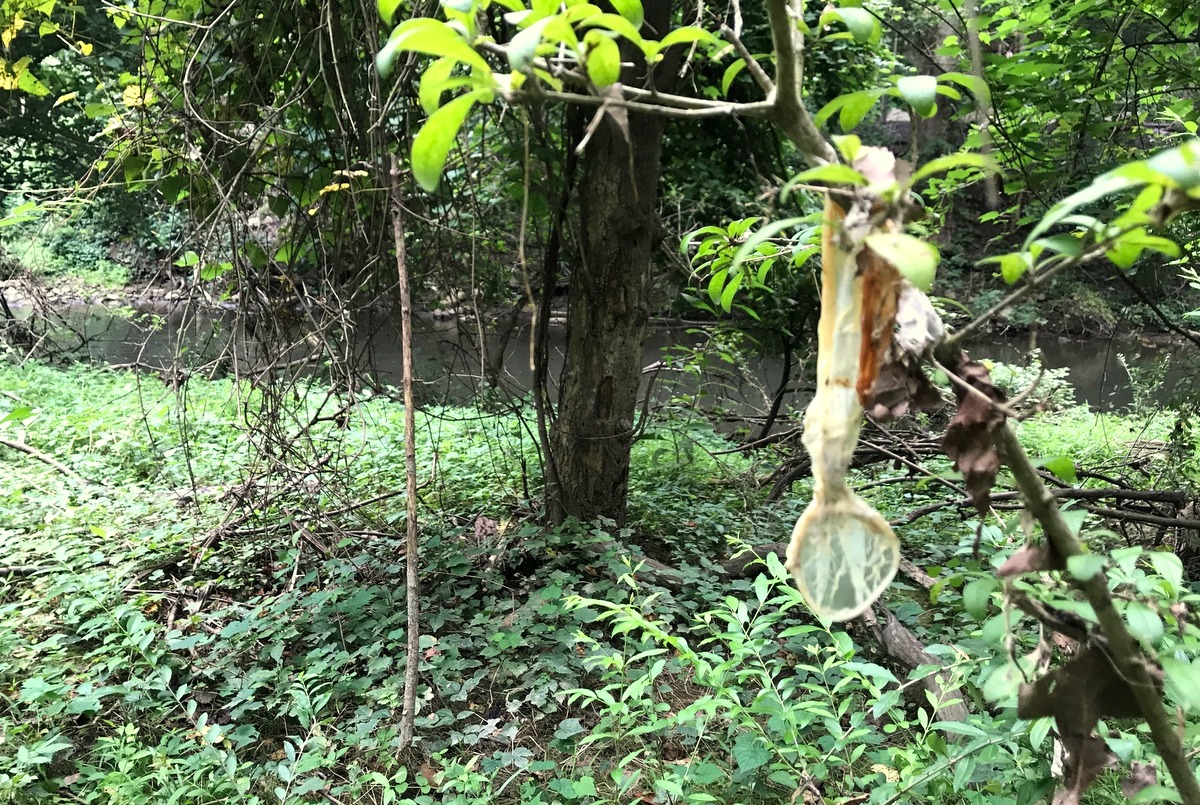 A used condom and paper packaging were among the many items found on trees branches and brushes as far as 100 feet downstream from manhole 6883 by Roger Gookin. (Both: Mark Reutter)

Roger Gookin, a retired Anne Arundel sewage contractor who produced evidence of the sewage spill for the Green Towson Alliance, says  manhole 6883 was long identified as a likely spot for a significant sewage “blow out” in the park area.

A 2012 report by consultants Rummel, Klepper & Kahl predicted that the manhole, located south of the Lake Roland dam, would undergo a sustained overflow during a major 24-hour storm.

A hydraulic model indicated that between 1 million and 1.78 million gallons of sewage mixed with rainwater could spew out of the manhole during such future storms, the latter equal to the volume of three Olympic-size swimming pools.

“People have been hoping since the election that Johnny O will be a change agent and do something about these problems.”  – Tom McCord.

Such an event would violate Baltimore County’s 2005 consent decree with Maryland Department of the Environment, which calls for improvements to the sewage system that would end “SSOs” (Sanitary Sewage Overflows) going into local waterways and the Chesapeake Bay by March 2020.

(This decree is separate from a state and federal consent agreement with Baltimore City, which has pledged to end “structured” sewage overflows into the Jones Falls by mid-2021.) 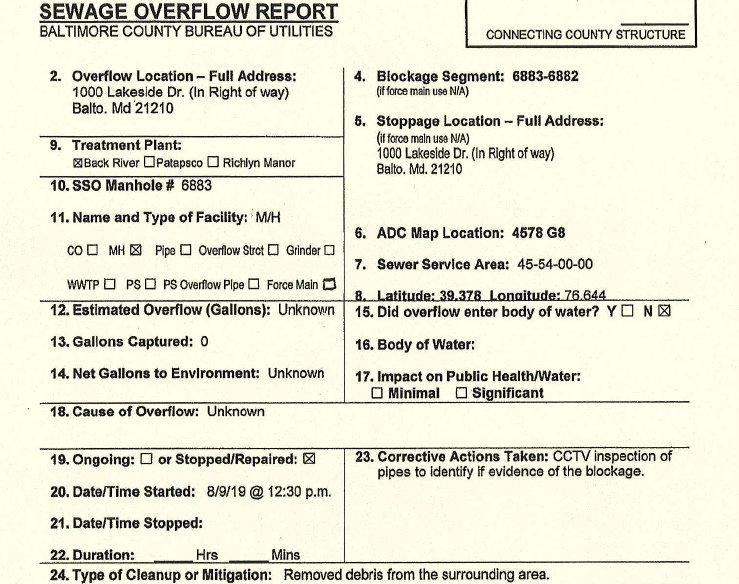 Baltimore County filed a report about manhole 6883 last Friday, August 16, listing both the cause and the amount of the spill as “unknown.” (Maryland Department of the Environment)

Under the county consent agreement, all overflows are suppose to be reported to MDE, which then places the information on a publicly accessible database.

McCord and Gookin say sewage likely adds to the high readings of fecal bacteria routinely found by environmental groups and by the Baltimore County Health Department at Lake Roland and surrounding streams.

The threat of wastewater leaks and overflows, they say, arises from an overburdened 42-inch pipe built in the early 1950s under the lake and alongside the Jones Falls into the city.

This pipe conveys sewage from highly populated parts of the county – from Pikesville and parts of Owings Mills on the west to Lutherville, Timonium and Towson on the east – that eventually travels through the city to the Back River wastewater plant for treatment.

During heavy storms, rainwater infiltrates the entire upper Baltimore system, according to the RK&K report.

The Green Towson Alliance and others say the county needs to build a relief sewer and also undertake repairs on the old lines, which might well be leaking fecal material and household chemicals into the lake through cracks and mismatched joints.

The county is constructing a relief pipeline along Towson Run to handle the expected increase of sewage from an expanded Towson University, construction of Towson Row and other projects.

Otherwise, there are no plans by the Olszewski administration to make major improvements to the local sewer mains.

In his statement to The Brew, Smith defended the county as “sensitive to the Lake Roland area and the environment.”

He said the County Department of Public Works has worked consistently with the Green Towson Alliance, state representatives and county council members “in an attempt to resolve issues.”