Considered to be only a matter of time, the time has come.

Johnson has informed his staff that he is taking “extended time off” and they should report to Todd A. Carter, who was appointed his deputy the day before the ransomware attack on Baltimore’s government computer systems was announced on May 7.

UPDATE 7 p.m.: The mayor’s spokesman, Lester Davis, confirms that “Frank Johnson is on leave and Todd Carter is acting CIO.”

Members of the City Council, among others, have faulted Johnson’s response to the attack, which brought vital government services to a standstill and is expected to cost taxpayers $10 million to repair.

Johnson was criticized for not having a written recovery plan, not communicating effectively with agency heads, and not having an inventory of applications and the necessary data to get operations back online quickly.

In fact, after a brief media appearance in which he said he could not address the attack because it was under criminal investigation, he stopped taking questions from the press or public.

This was the second time that local government had been struck by malware under Johnson’s tenure.

In March 2018, Baltimore’s 911 dispatch system was hacked, forcing the system to revert to manual mode to handle emergency safety and medical calls for a period of 15 hours.

“First, he allowed an attack almost to cripple something, then he allowed a second attack to cripple everything. Not only did he not seem to learn from the first instance, but he then blamed his subordinates and external actors for the second attack,” said a source, who asked for anonymity to speak candidly.

Johnson did not pick up a call today on his cell phone, whose mailbox was full. 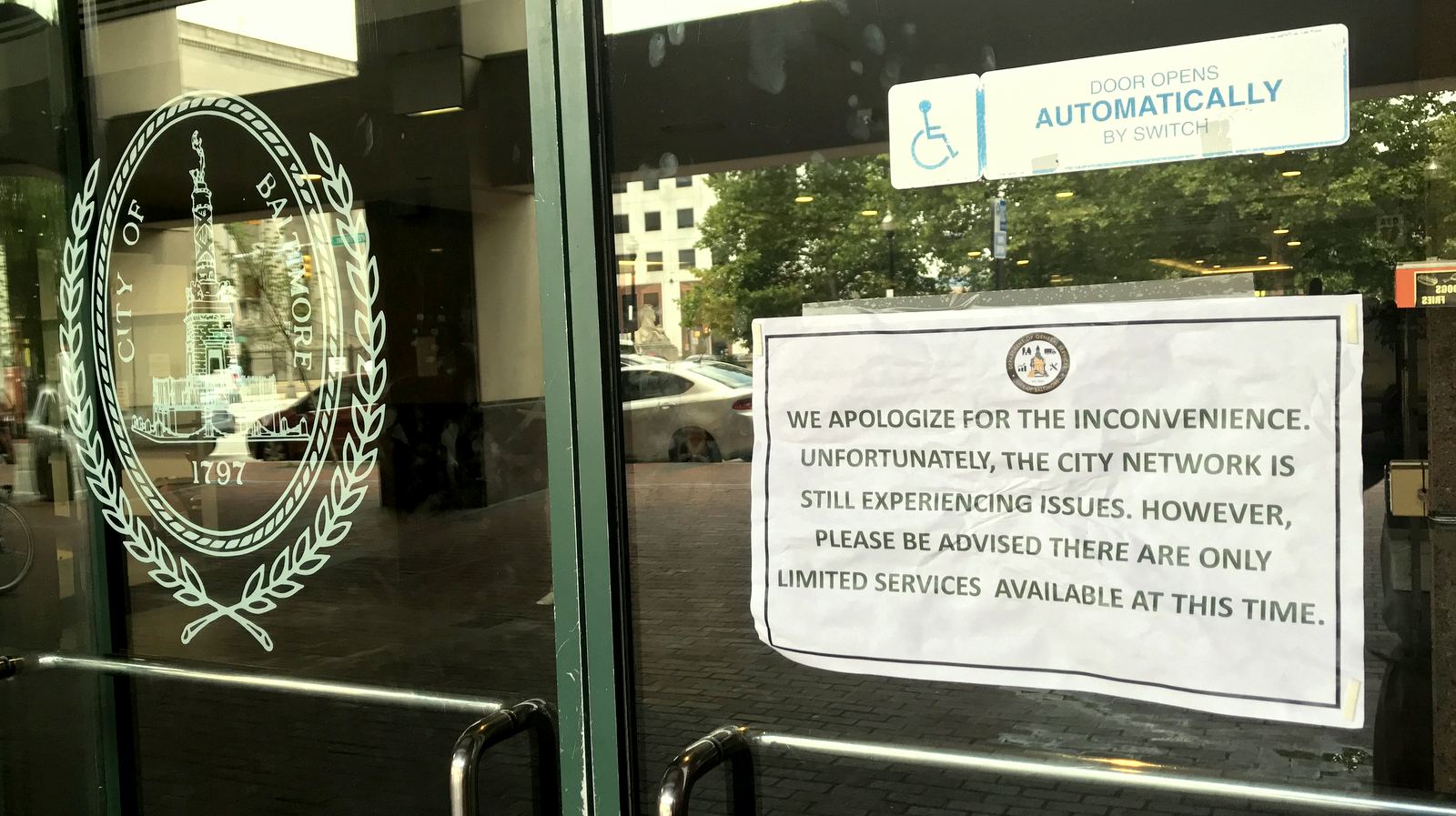 A notice on the Benton Municipal Building three weeks after the May 7 cyberattack. (Mark Reutter)

Even before the May 7 attack, Johnson was on wobbly grounds with Bernard C. “Jack” Young, who took over as mayor on May 2 following the resignation of Catherine Pugh.

Johnson was hired by Pugh in September 2017 based on the recommendation of her chief of strategic alliances, James T. “Jim” Smith Jr.

Pugh agreed to pay Johnson $250,000 a year, the highest salary in city government, to take over the information technology office, which had seen three chiefs (Rico Singleton, Chris Tonjes and Jerome Mullen) and two acting chiefs (Evette Munro and Martin Okumu) come and go since 2012.

Johnson soon established himself as a hands-off executive who traveled widely to industry conferences, leaving his staff and an array of vendors and consultants to make decisions about how to update the city’s aging and operationally disjointed computer systems.

“Jack has not been happy with Frank for a long time,” a City Hall insider said today. Johnson’s political exposure was heightened when his political guru, Jim Smith, preceded Pugh in leaving his top-level post in early April.

Todd Carter is a new face in city government, having started as deputy chief for the Baltimore City Information & Technology (BCIT) office on May 6.

In his Linked-In profile, Carter is still listed as vice president of IT Portfolio Management at Exelon Corp. There is no mention of his city government position.

Todd A. Carter is expected to be named interim IT chief for Baltimore City. (LinkedIn)

Sources says his influence greatly increased after Johnson terminated Martin Okumu as director of IT infrastructure in July. Also not hurting his prospects is his popularity among Mayor Young’s senior staff, including deputy chief of staff Sheryl Goldstein.

“The new guy is intelligent, but he doesn’t want to listen to us. Those in the trenches might be facing a new set of problems,” lamented an IT officer.

Carter could not be reached today. The mayor’s office did not immediately respond to a request for comment.