But watching the band perform at the launch of Mayor Jack Young’s campaign kickoff on Saturday, then stand at attention as one politician after another heaped praise on the mayor, was too much for Evan Serpick.

“How can public school students participating in a public school activity be compelled to participate in a political candidate’s campaign rally?” asked the Mount Washington resident and former City Paper editor.

“I can’t imagine that this is legal,” Serpick wrote on the Baltimore City Voters Facebook page, sparking a lively discussion among participants.

Opinions ranged from “it’s no big deal” and “let the kids have a joyful moment” to “low-level corruption” by an official accused of using school kids “as if they were at your disposal for a photo op.”

Yesterday, it seemed like no one in charge of Saturday’s event, or the circumstances of the band’s participation in it, was willing to talk.

Several emails and phone calls with detailed questions about the campaign’s arrangement with the band have gone unanswered by LeRoy Graefe, Young’s campaign manager.

There was also no response from Charles Funn, director of the marching band, and Dr. Yutende Reeves, Dunbar’s principal.

UPDATE: Graefe said in an email this morning:

“The mayor was honored and proud to have the marching band from his high school at his campaign kick-off. Having them there was a great way to showcase some of the many talented young people in our city. No city resources were used.”

UPDATE 2: Graefe said this afternoon that “food, transportation and donation to the school” (amount unspecified) was made by the Young campaign committee.

• Is there an administration policy or guidelines regarding the use of school property – or, by extension, school children – for political events?

• Should the Dunbar band be paid by a campaign committee or candidate for participating in such an event?

• Is the free use of the band – or, conversely, a donation by the candidate to the band or the school system – appropriate?

So far, school administrators have not determined the answers, said spokeswoman Tabitha Lee. 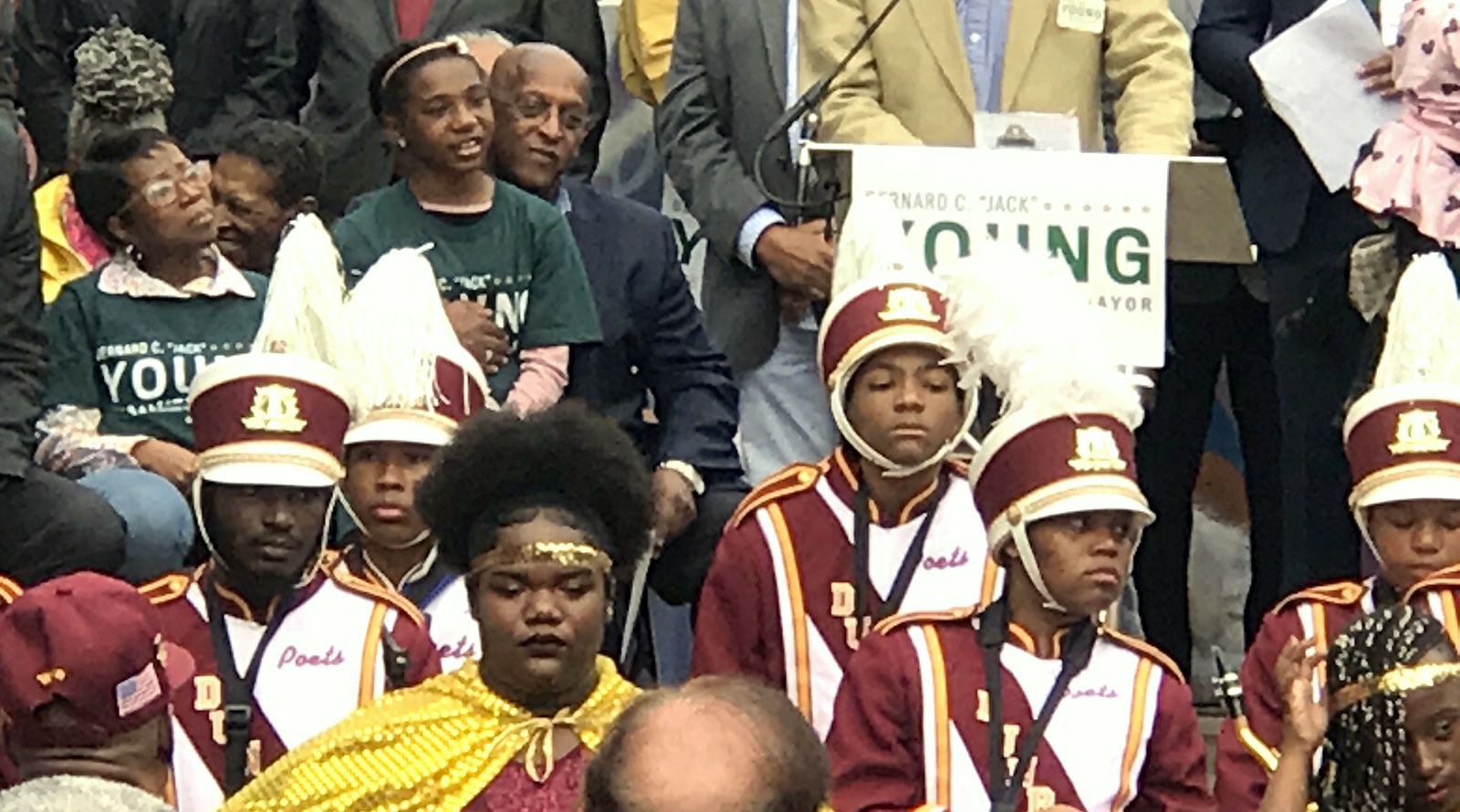 Jack Young, an alumnus of Dunbar High School, is flanked by the marching band at Saturday’s kickoff. He is holding his granddaughter, Madison, and is seated next to his wife, Darlene. (Mark Reutter)

Serpick said he was distressed that some people have accused him of criticizing the children in the band.

“My criticism was [directed] at Jack Young for asking innocent kids – and leaning on low-level school officials – to do him a political favor,” he told The Brew.

He said he heard from several lawyers, who called the arrangement a “bad look,” whether illegal or not.

One of those lawyers, contacted by The Brew, refused to publicly comment, saying it could jeopardize the interests of a client whose well-being was dependent on the goodwill of the mayor’s office.

Article 6 of the City Code prohibits government employees from using “prestige of office” for private gain.

A spokeswoman for the Maryland Board of Elections said she did not think the band arrangement violated any state election laws. She promised to reach out to an official who could comment more directly. That official has yet to respond.

The Baltimore City Code does include a loosely written prohibition against government employees using “prestige of office” for private gain.

Article 8, Section 6-36 reads in full: “A public servant may not intentionally use the prestige of his or her office or position for his or her own private gain or that of another.”

The key word of the sentence is “intentional.” And determining the possible punishment for such an infraction – even if formally brought to the attention of the city Board of Ethics – is unclear and apparently has not been tested.