Towson-based developer Caves Valley Partners has a mixed reputation in Baltimore, earning rave reviews from some for its splashy overhaul of aging Cross Street Market, and criticism from others for what they see as favored treatment by city government and poor treatment of Cross Street’s original vendors.

But opinion seems to be pretty much universal regarding New York-based developer Ashkenazy, under whose ownership both the Village of Cross Keys and Harborplace have fallen into disrepair and suffer from high vacancy rates.

That may explain the overall positive reception Caves Valley principal Arsh Mirmiran got last night when he presented his group’s plan to add a 318-unit “high-end” apartment building at Cross Keys, along with more office space, a grocery store and other new retail.

“We are 150% supportive of the effort,” said Hal Hathaway, president of the Cross Keys Maintenance Corp., at the monthly meeting of the Roland Park Civic League, where Caves Valley unveiled its plans.

“Why did Ashkenazy let this thing slide? Ask the same thing about downtown Baltimore.”

“I’m so grateful that you have come in,” said longtime Cross Keys resident Margie Goodman. “You are beyond our wildest dreams.” 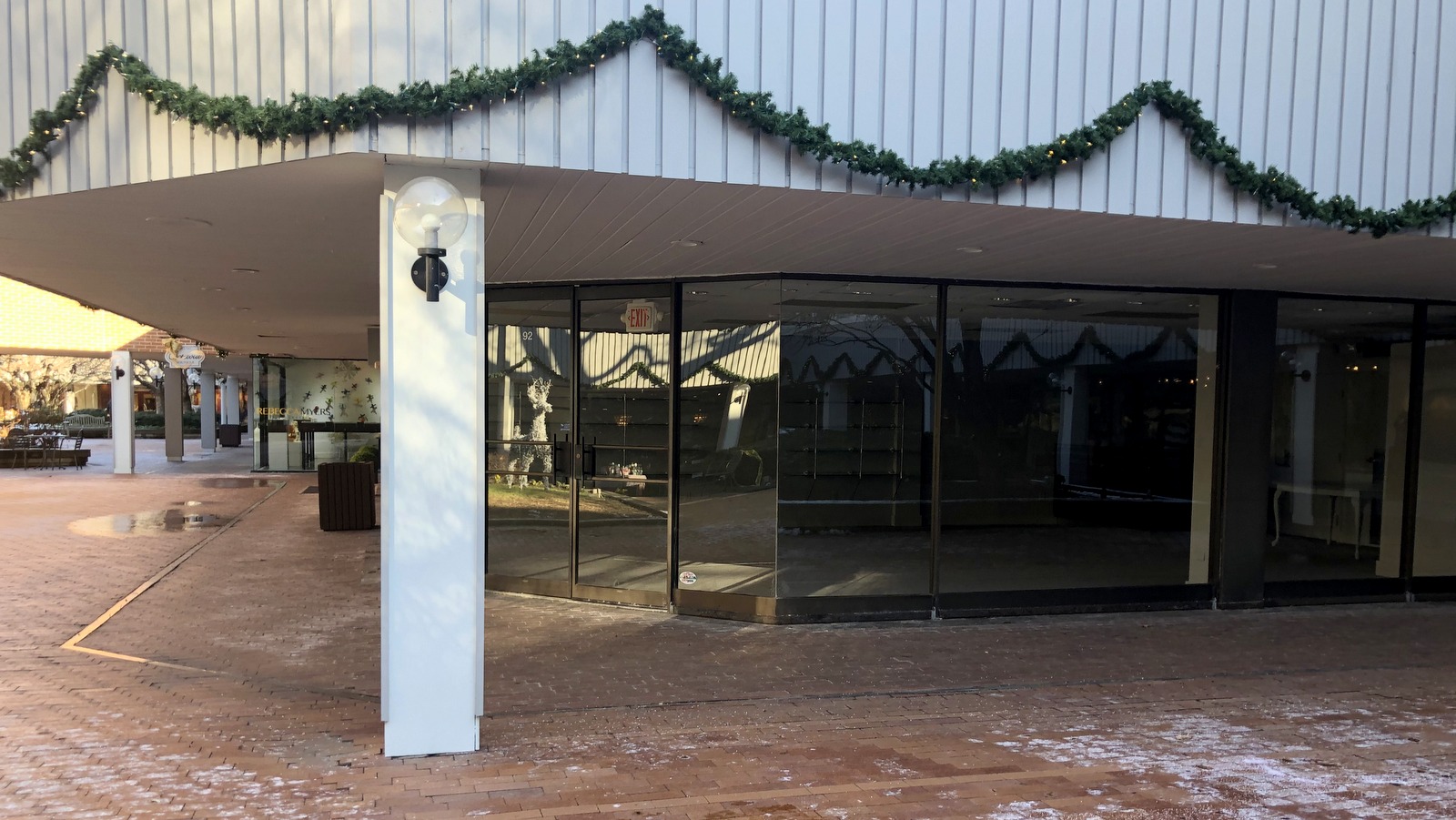 But some, while acknowledging the need for an overhaul, were taken aback by the scope of Caves Valley’s development plan and concerned it would spoil the leafy half-century-old community created by James Rouse.

“What I’m hearing is a lot of concrete and maybe not a lot of the trees and parks and the things that we’re used to at Cross Keys,” said Jeannie Pohlhaus, who lives at Fallswood II, at the southern end of the Cross Keys campus where the developer envisions new construction.

“I mean it was a prototype for Columbia, and the whole idea was that it would be a village,” she said, adding that she and her neighbors had been left out of the loop.

Mirmiran came without schematics and said he could not divulge many details of the plan as a condition of Caves Valley’s tentative deal to acquire the property from VCK Realty LLC, a subsidiary of Ashkenazy Acquisition Corp.

Initially, Civic League leaders had announced the meeting would be “closed to the media” at the request of the developer, citing the buyer’s “confidentiality agreement” with the seller. The group later dropped that stance in an emailed “update.” 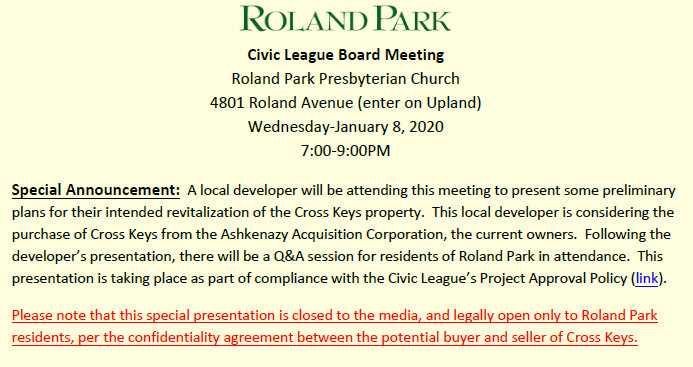 The Roland Park Civic League’s initial announcement said Caves Valley’s presentation at its monthly meeting was “closed to the media.”

Addressing an audience of about 70 people in a church basement, Mirmiran said that, growing up in Baltimore, he was very familiar with Cross Keys, located just north of the Poly-Western campus on Falls Road.

Watching Cross Keys’ decline since Ashkenazy acquired it from General Growth Properties in 2013, he said, inspired him to take on the task of purchasing and overhauling it.

Once a bustling place, with a toy store, deli, high-end men’s and women’s clothing stores and more, the complex’s Village Square retail area now has a ghostly feel, its inner courtyard sculptures surrounded by vacant or barely patronized shops.

Anchor tenants William Sonoma and Talbots remain, as do fixtures like the craft and clothing purveyor Store Ltd. But many others have left, including Donna’s restaurant.

Mirmiran said Cross Key has a 40% residential and retail vacancy rate, but he believes its central location at the north side of the city with easy access to I-83 and the suburbs make it ripe for revival and that there is a market for apartments that a refreshed Cross Keys could capture.

But are apartments so important for Cross Keys?

Some questioned the residential component of the plan presented by Mirmiran, who did not address target rental rates last night.

“To me, the Village Square is the most important,” said developer David Tufaro, who lives nearby. 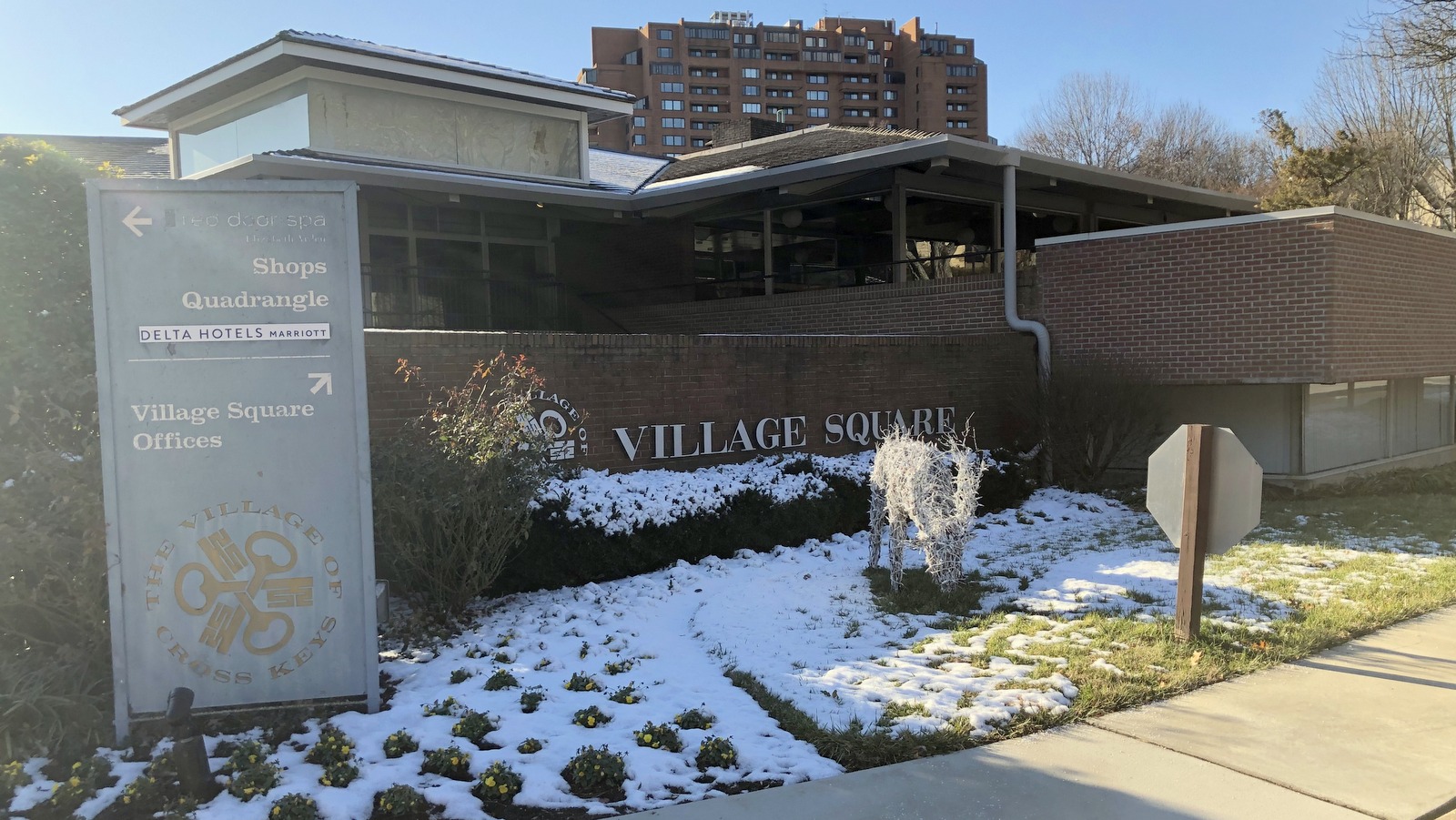 The Shops at Cross Keys, an early James Rouse development, was a prototype for the town of Columbia he pioneered. (Fern Shen)

Others who spoke at the meeting were concerned that any future construction improve walk-ability, insure no net loss of permeable green space (“replace it 3 to 1 with something better”), and live up to the community’s unique design and architecture.

Cross Keys is “a subtle and beautifully designed place” with “a restrained elegance” that should be preserved, said one resident, noting that it includes a building designed by the renowned architect Frank Gehry.

She was not enamored of a project some in the crowd enthused over, the makeover of North Baltimore’s Rotunda, calling it “cookie cutter” and “like every place else.”

Mirmiran ran through elements of his project, promising more details if the purchase is completed, as he hopes, in the coming months:

• Apartment building. To be built on the surface lot between Village Square and the tennis barn, which would be demolished, and possibly the two outdoor tennis courts and adjacent parking lot. (These, Mirmiran said, would be rebuilt.) Current design is “five or six stories” and 318 units, “but it could be 300 to 350 units.”

• Grocery store. A small footprint (20,000-25,000 square-foot) food store “somewhere in the vicinity of Village Square.” An 8-foot-diameter stormwater culvert runs under the property, feeding into the Jones Falls, creating some siting issues.

• Courtyard Renovation. “Would be similar to what was done at Greenspring Station.”

• Tenant Mix. “Some kind of draw to bring people in,” including restaurants, a gym and a hair salon.

• Office Building. To be built on the parking lot between the current tennis barn and the Quadrangle building. Would require demolition of one of the two existing one-story office buildings.

Mirmiran described this as “the final piece” to be built only after the apartments are built, and the retail and existing office spaces are “stabilized.”

Mirmiran said Caves Valley is seeking community groups’ approval because of zoning changes that would be required to move ahead with the project, including changes to the Planned Unit Development, or PUD, for Cross Keys.

He said he had obtained support for the project from Councilwoman Sharon Green Middleton, who attended the meeting, and also has discussed it with Mayor Bernard C. “Jack” Young. 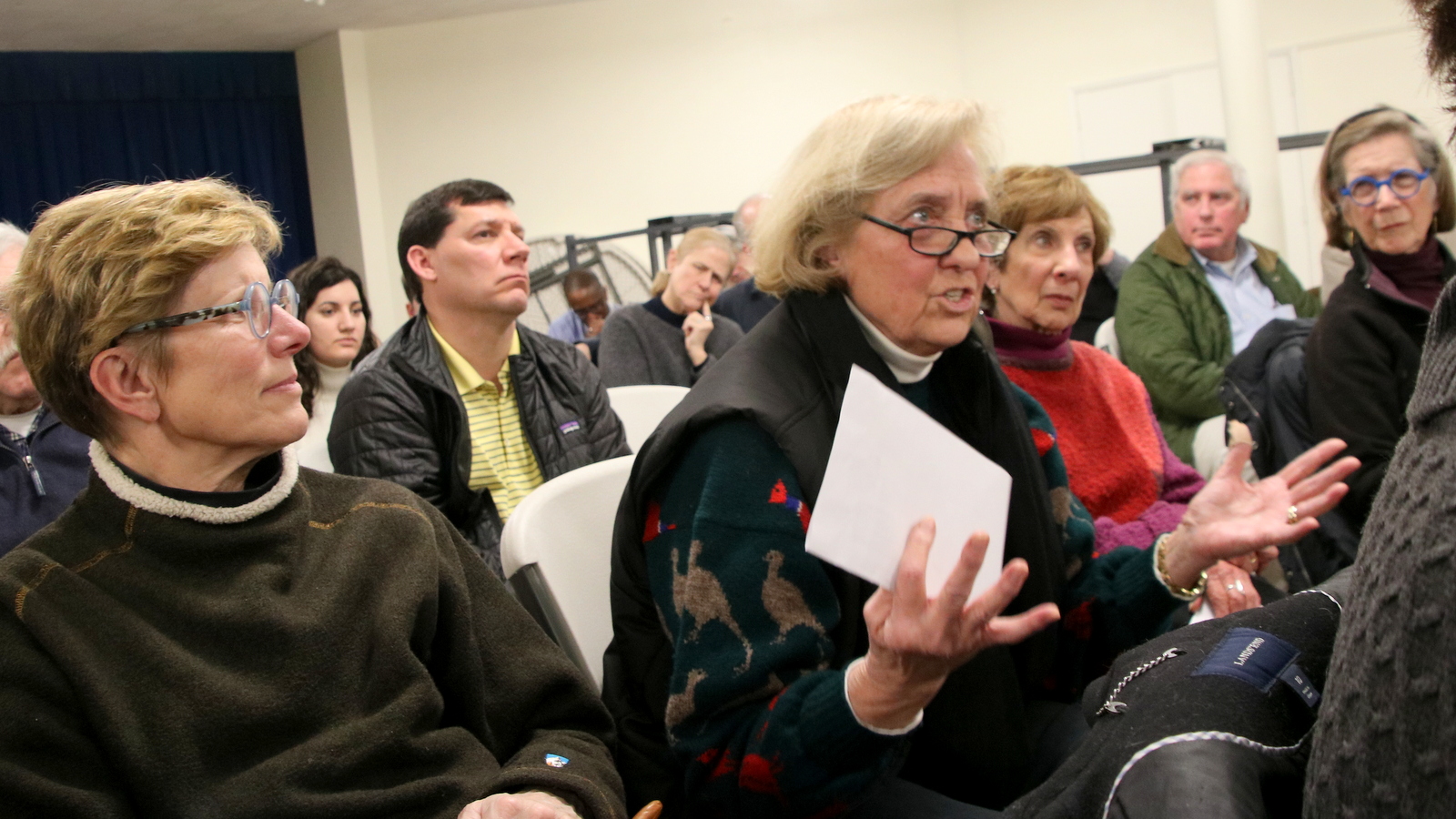 “What I’m hearing is a lot of concrete and not a lot of trees and parks,” Cross Keys resident Jeannie Pohlhaus said at a meeting about a plan to redevelop the community. (Fern Shen)

Mirmiran declined to disclose the purchase price for the land, which does not include the hotel or condominiums on the north side of the development, which are not owned by Ashkenazy.

But he indicated that increasing density there would be essential.

“We’re overpaying for the property,” he said. “We believe there’s an upside in the property.