“I’m not sure this Council is aware of how innovative this is,” she told the Education and Youth Committee.

Very few cities have dedicated such a chunk of their budgets to racial and educational equity, she said, playing to the chamber an upbeat video about several youth-oriented programs that have benefited from the fund.

Then Bell-McKoy cited the fund’s uniqueness to explain a not-so-upbeat truth:

ABC has not yet disbursed the first $12 million round of funding to some organizations – and the second year of funding for youth programming has been considerably delayed.

These shortcomings are an outgrowth of the fund’s uniqueness, she said.

“Government doesn’t have any tolerance for mistakes,” she explained. “And you can’t do a big, huge fund and huge innovation and not have mistakes.” 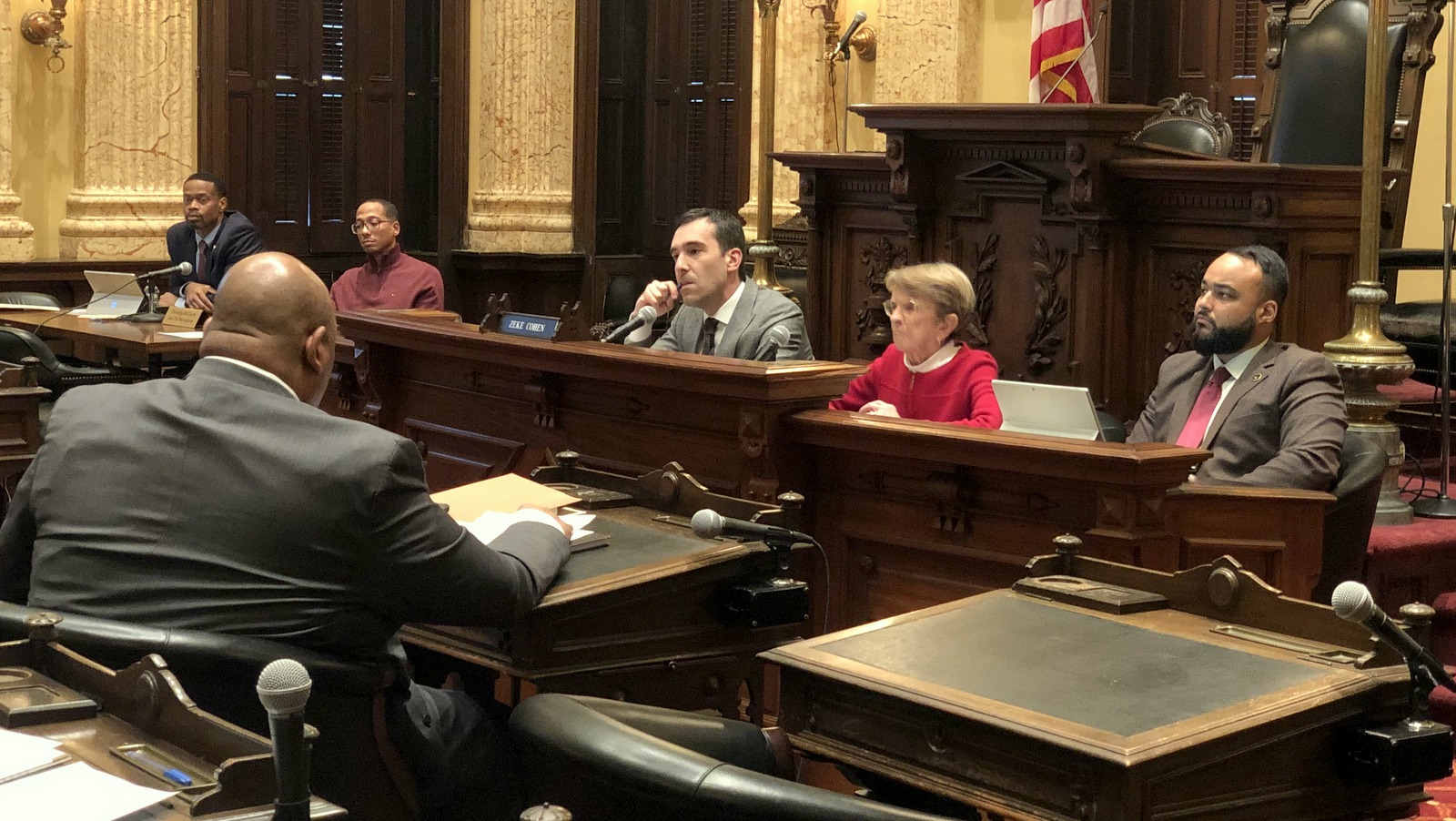 Councilman Zeke Cohen, chair of the committee, called the hearing to get answers. He spoke little and mostly listened, but at one point he did react.

That’s when Bell-McKoy said she’s been in discussions with the administration of Mayor Bernard C. “Jack” Young to get a 15% to administer the funds.

That’s when Cohen raised his eyebrows. 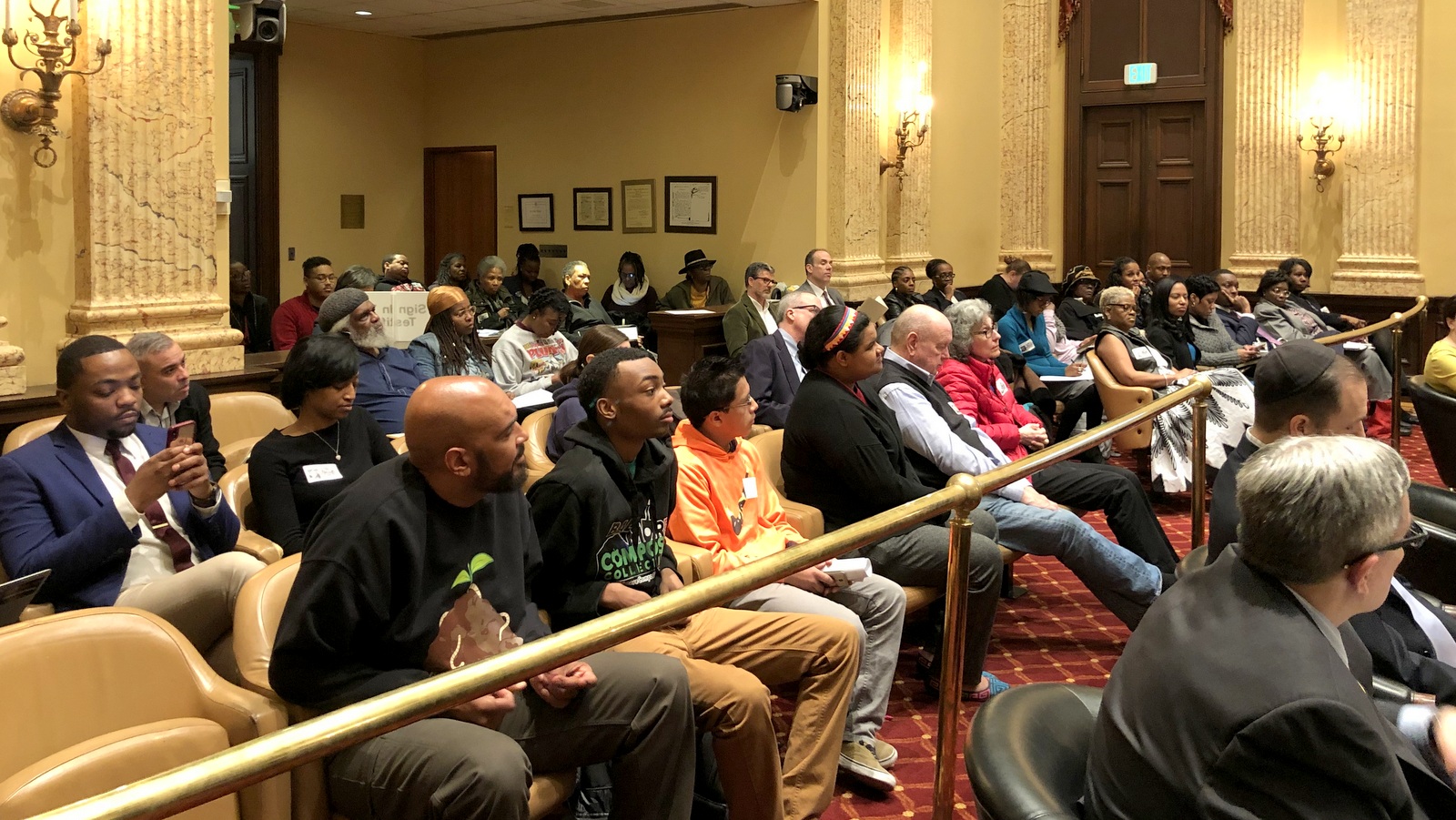 A packed Council chambers listens to testimony about the tardy distribution of money to grassroots groups. (Ian Round)

For years, ABC has been the fiscal agent of the Ryan White HIV program, distributing federal funds on behalf of the city health department.

Its involvement as a middleman encouraging nonprofits to buy “Healthy Holly” books got the organization in hot water last year. But it survived the scandal that led to the resignation of Mayor Catherine Pugh, and its contract with the health department was renewed by the Young administration.

(Young was also instrumental in getting ABC designated as the youth fund’s manager when he was City Council president.)

Bell-McKoy, a former top aide to Mayor Kurt Schmoke and ex-school board commissioner, said two factors have hindered ABC’s management of the youth fund – not enough administrative support and inexperience by the grantees in accounting.

ABC is responsible for running the fund through June 30, a deadline set by the law that created the program. The next day, a permanent intermediary must take over.

ABC is creating an entity – the Baltimore Children and Youth Fund, Inc. – if they cannot get nonprofit status by June 30. If no entity is created by then, funding for youth programs may be further delayed.

But Bell-McKoy shook her head, saying she doesn’t want to keep managing it.

Clarke said she didn’t understand the pressure to transition between intermediaries so quickly (“Is there a rush here to do this now?”), but Bell-McKoy said they could meet the deadline.

“That would be the miracle of the ages,” Clarke replied. “But I guess you’re gonna have to perform it.”

Roger Schulman, president and CEO of the Fund for Educational Excellence, which is part of the process of creating the new entity, said he knows what ABC is up against.

He mentioned multiple hurdles such as insurance, back-end infrastructure and nonprofit status.

“We’re not going into this naively,” Schulman said. “It is a heavy lift.”

“Somehow, somebody has to do it,” Clarke said. “We have to find a way to get the money to the programs faster.”

Councilman Kristerfer Burnett asked what more the Council, or the mayor, could do to make sure the process moves forward.

Bell-McKoy said the Council has done a lot. “The challenge is the nature of government dollars.”

Government funding requires detailed and auditable documentation, she explained, and many grassroots grantees are simply not experienced in such recordkeeping.

This has caused a holdup in financial reviews. One employee, she said, has been working every weekend, creating reports that run hundreds of pages for each grantee.

“I have this image of some poor tired woman sitting under a light bulb trying to get through a pile of reviews,” Clarke quipped.

Bell-McKoy said Clarke’s image wasn’t far from the truth. Grantees unaccustomed to grant compliance had to go back and find receipts of their expenses.

Cohen invited young people who had participated programs that have been funded to testify.

“This program impacted my grades and my ability to learn English,” he said. He spoke slowly and tentatively.

“Miguel, I know it’s not easy speaking at the mic,” Cohen said. “But I thank you for what you’re doing.”

He told The Brew he has received help from YES Drop-In Center, a youth fund grantee, which serves homeless youth. YES, which stands for Youth Empowered Society, is one of three programs he has participated in.

He watched the hearing from the back row, wearing a black shirt, black jeans, black shoes and a silver tie. “All this stuff I got on I got from those organizations,” he said.

Since funding has been delayed, he has gotten less help. He said he wished the youth fund had been around when he was a kid. Now he hopes his nieces and nephews can benefit.