Turned away from the Baltimore senior center where he sings in the choir, joins in line dancing classes and gets a $1.25 lunch, George Washington was outside the building looking a bit lost.

“She told me today it’s closed – it’s because of the virus,” said Washington, 68, a retired city sanitation worker, sitting on a bench outside the Waxter Center for Senior Citizens.

Earlier in the afternoon, Mayor Bernard C. “Jack” Young had announced the closure of seven senior centers as a precaution against the transmission of the new coronavirus.

City-sponsored gatherings of 250 or more people – including the St. Patrick’s Day Parade – are also being canceled, members of the media were told.

Reporters breathed a sigh of relief that the hastily called press conference was not held to announce anything more dire or dramatic.

When they emerged from City Hall, they learned that Maryland Gov. Larry Hogan had just announced that public schools will be closing for the next two weeks:

That includes Baltimore’s 79,000 students, many of whom depend on their schools for subsidized meals.

It was a day of fast-moving developments for city officials and the city at large, as public and private entities began to come to grips with the gravity of the global pandemic.

This morning state officials announced that a man in his 60s in Prince George’s County tested positive for the virus and remains hospitalized.

One of 12 confirmed COVID-19 cases in Maryland, the man had not been exposed to the virus through travel or contact with a person who was known to be infected.

“Just a few hours ago we learned that Maryland had its first coronavirus case unrelated to travel,” Young said.

“This is an indication that we have entered a new phase of the virus where COVID 19 may be spreading from person to person,” he said, reading from a statement.

Off script, Young had to answer questions about the sudden departure of David B. McMillan, head of the Mayor’s Office of Emergency Management (MOEM).

Young was asked why McMillan – Baltimore’s $132,600 a year cabinet official in charge of crisis response – was suddenly placed on “indefinite leave” just as the city was in the throes of an huge public health crisis?

The mayor refused to say.

“I will not, you know, talk about the former director because we owe it to him not to discuss his personal matters with the news media,” Young said.

On Wednesday, Young faced criticism online for a tweeted photo showing him joining hands with Councilman Zeke Cohen and a group of people gathered at City Hall. 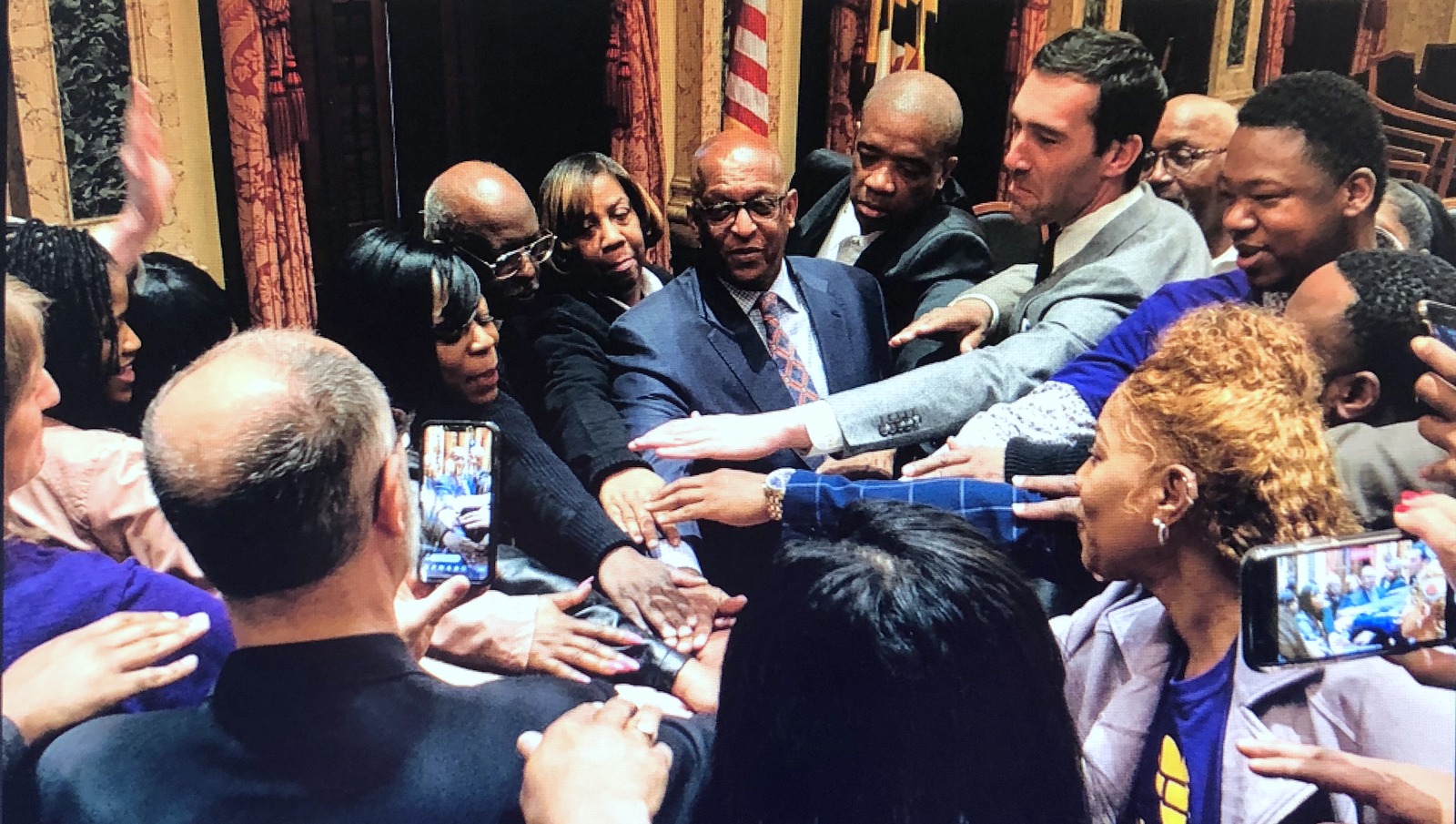 MISSED THE MEMO? At a March 11 press event, Mayor Young, Councilman Zeke Cohen and others touch hands to celebrate the launch of the Trauma Informed Care Task Force. (@mayorbcyoung)

With public health officials telling people to avoid handshakes and hugs and switch to elbow-taps and maintaining a social distance, what was Baltimore’s top official doing leading all the group touching?

The photo, from the launch of Cohen’s Trauma Informed Care Task Force, appears to have been deleted from the mayor’s Twitter account.

It recommends postponement of “non-essential mass gatherings where large numbers of people are within arm’s length of one another.”

Likewise, all events geared towards older adults and those with chronic medical conditions should be canceled, Dzirasa advised.

The Health Department’s full recommendations can be found on its website and on also on its Facebook page. 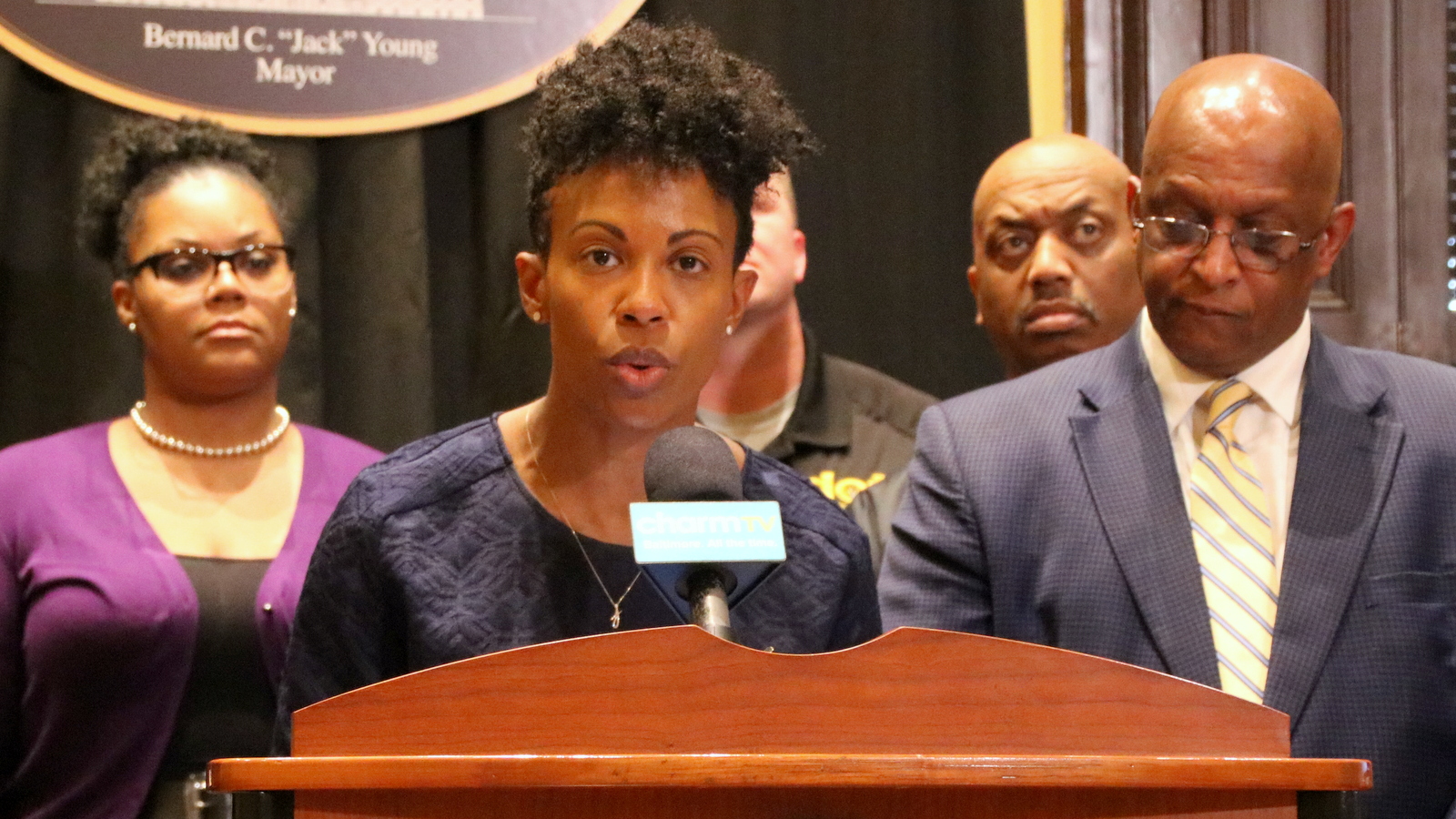 No School, No Evictions

Young’s press conference came in the midst of a dizzying succession of policy announcements, event cancellations and work-from-home orders.

Following the lead of many other cities, Young canceled evictions while schools are closed due to the virus.

”Every other seat in the Council chambers will be blocked off to enforce social distancing”  – Brandon Scott.

He also canceled the State of the City Address he planned to deliver on March 23 at Coppin State University.

Virus precautions were being taken in City Hall, where hand sanitizer pump bottles and wall dispensers have sprung up everywhere.

City Council President Brandon Scott announced that he is advising committee chairs to cancel hearings if possible and asked Council members and agency heads to limit staff attendance at hearings.

“Every other seat in the Council chambers will be blocked off to enforce social distancing,” Scott’s memo notes.

And the virus has shut down events planned on city streets, including these cancellations announced by Baltimore’s Liquor Board:

At the senior centers, what was canceled were classes, special events, large gatherings and trips.

It was a disappointment to Anna Rosales, 84, who has been a regular at the Waxter Center’s line dancing, sewing classes and chair yoga sessions.

“She comes for lunch every day too,” said her granddaughter Claudia Avalos, who was walking with Rosales outside the center.

Food will still be provided at the centers, but only in the form of box lunches to take away, officials said. The centers will be open, but only to serve as resource centers and to hand out the food.

Those who would like the box lunch set aside should call their senior center, Deputy Health Commissioner Heang Tan said today.

For Avalos, it’s not so much the food as the companionship and activities she’ll miss. Luckily she has her granddaughter to help out.

“I ended up buying some puzzles and paint-by-numbers sets,” Avalos said. “So, we’ll get through this.”