“We’re not fooling around anymore,” Maryland Gov. Larry Hogan said today, announcing that all of the state’s bars and restaurants, along with movie theaters and gyms, are to be closed effective 5 p.m.

“Far too many people had continued to ignore the warnings and have continued to crowd into bars and restaurants,” Hogan said, explaining that the “drastic” action is necessary to slow the spread of the new coronavirus, now a global pandemic.

So who has been doing all this ignoring the advice from public health officials that people avoid contact with others, shun public places and maintain a six-foot “social distance” when out and about?

At 4 p.m. Saturday in Federal Hill, the streets were abuzz with green-clad revelers hoisting drinks and roaming from one watering hole to the other, even though the “Federal Hill Irish Stroll” event scheduled that day was, technically, canceled.

“We will be honoring all drink specials! And so will most of the stops on the trail, so we hope to see you!” Ryleigh’s Oyster Federal Hill said on Facebook. 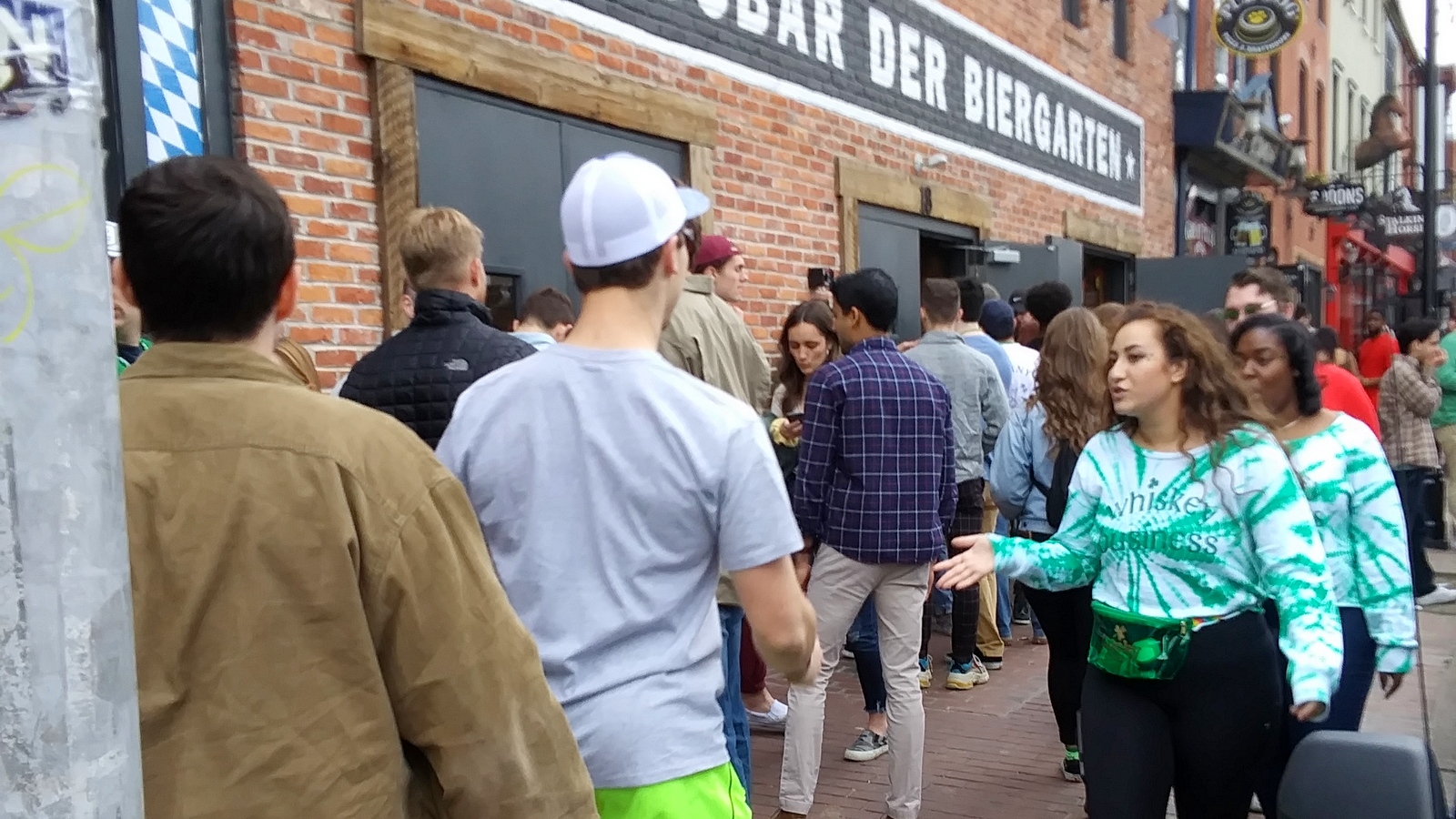 Thanks to the bars continuing to advertise drink specials and some leaving their promotions for the event online, the annual St. Patrick’s Day-themed bar crawl in this South Baltimore entertainment district essentially rolled on.

Jonathan Gabel, a spokesman for Lindy Promotions, says the company emailed and refunded ticket holders, had no employees at the event and “clearly postponed the crawl on all of our websites and social media” amid public health concerns and Hogan’s prohibition on gatherings of 250 people or more. 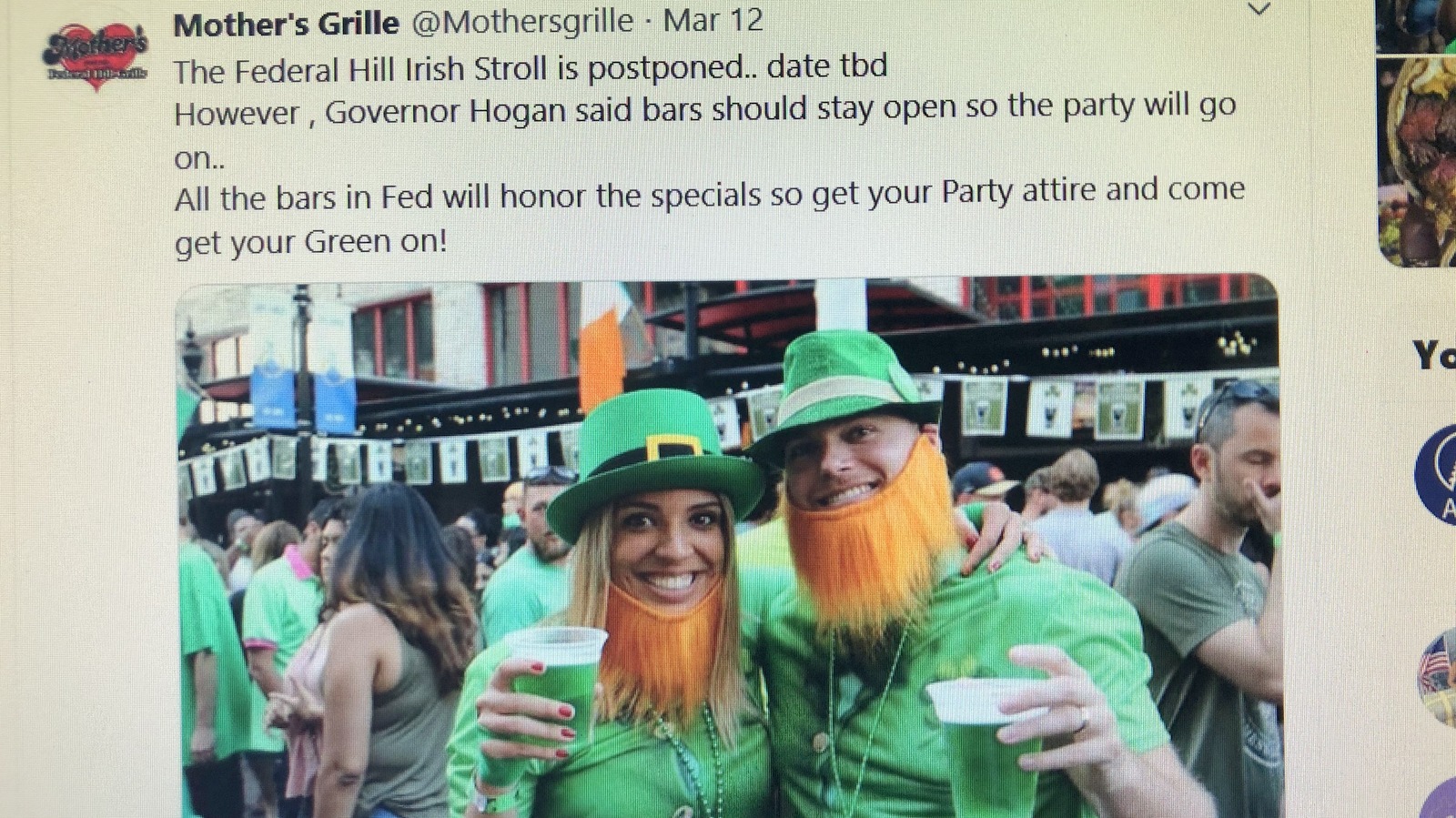 To be sure, a number of establishments in the city had closed or cut back hours in response to warnings about the fact that customers could spread the virus through casual contact.

Some restaurants switched to take-out only. But many bars and restaurants in Hampden, Fells Point and Canton were still slinging the beers, brunch and mimosas all weekend.

The photos showed Young posing next to 15 people – every one of them appearing to be within inches of each other, in some cases touching each other, including one woman with her arm draped over Young’s shoulder. 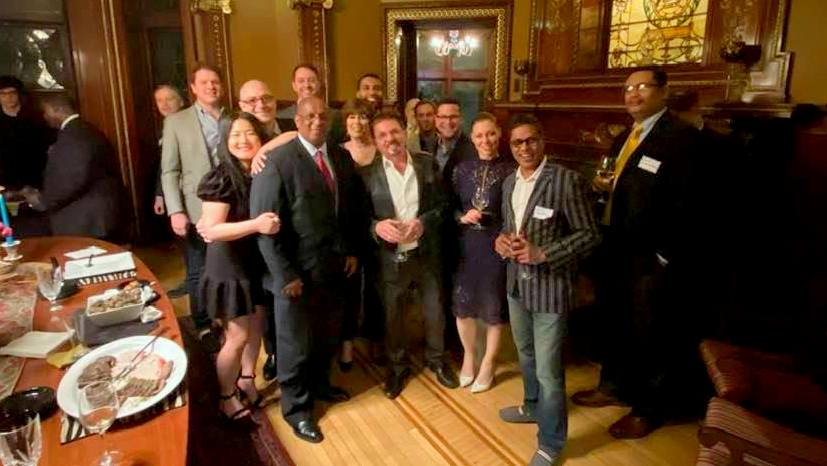 Young had organized several press conferences last week to inform citizens about confirmed cases of cornavirus in Maryland and about measures necessary to limit public interaction.

On Wednesday, he had cancelled large city-sponsored gatherings and activities for senior citizens and stood beside city Health Commissioner Letitia Dzirasa as she advised the public to wipe down surfaces and avoid handshaking.

Most other mayoral candidates running in the upcoming April primary, as well as candidates for other local offices, had already announced they are suspending events and neighborhood canvassing in light of the pandemic.

At the Young fundraiser on Friday, the host announced that more than $10,000 had been raised for the 65-year-old incumbent mayor.

With at least 37 cases of the new coronavirus now confirmed in Maryland – including four in Baltimore County and one in Baltimore City – the need to slow its further spread became ever more urgent.

In addition to the city and county, there have been, as of this morning, 15 confirmed cases in Montgomery County, 10 in Prince George’s, two in Harford, one in Anne Arundel, one in Howard, one in Carroll, one in Charles and one in Talbot, according to Hogan’s office.

Details on the confirmed cases are minimal, with state officials now refusing to provide patients’ gender and ages.

Sources tell The Brew that the Hopkins provider confirmed to have COVID-19 is a male physician.

A woman was notified of the case last Thursday night “because her kids play with his kids,” a source in the community with knowledge of the situation said.

Sources tell The Brew the Hopkins provider having COVID-19 is a male physician.

Hoppe did not respond to a question about the provider’s gender and position at the hospital, but did confirm that the person is recovering at home and that patients and staff with whom the person may have come in contact have been advised to self-quarantine.

Now thanks to Hogan’s announcement, the bars and restaurants in Federal Hill and across town will be shuttered.

But at least one resident remains angry that the “stroll” event took place despite the city cancelling city-permitted events of 250 people or more.

“When these bar owners decided to proceed with this bar crawl without the attendant protections (extra private security, police and fire personnel) available as a permitted event and also knowing the potential for exposing customers and others to the coronavirus, they demonstrated their blatant disregard for the health and safety of the community” Barbara Valeri said in an emailed statement to The Brew. 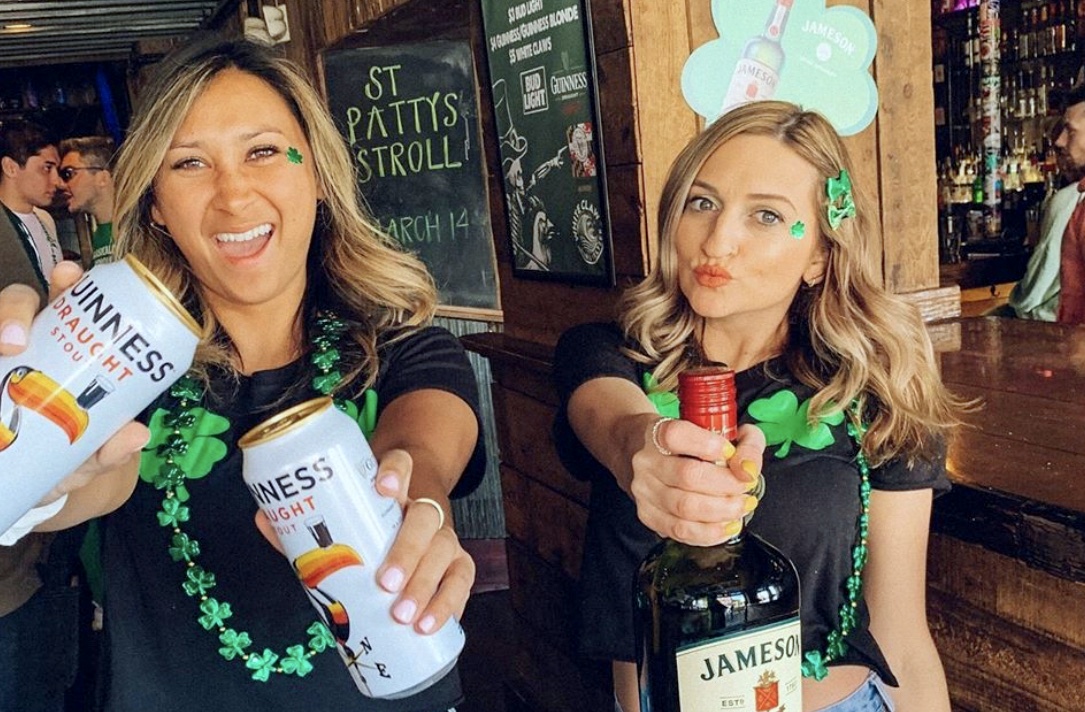 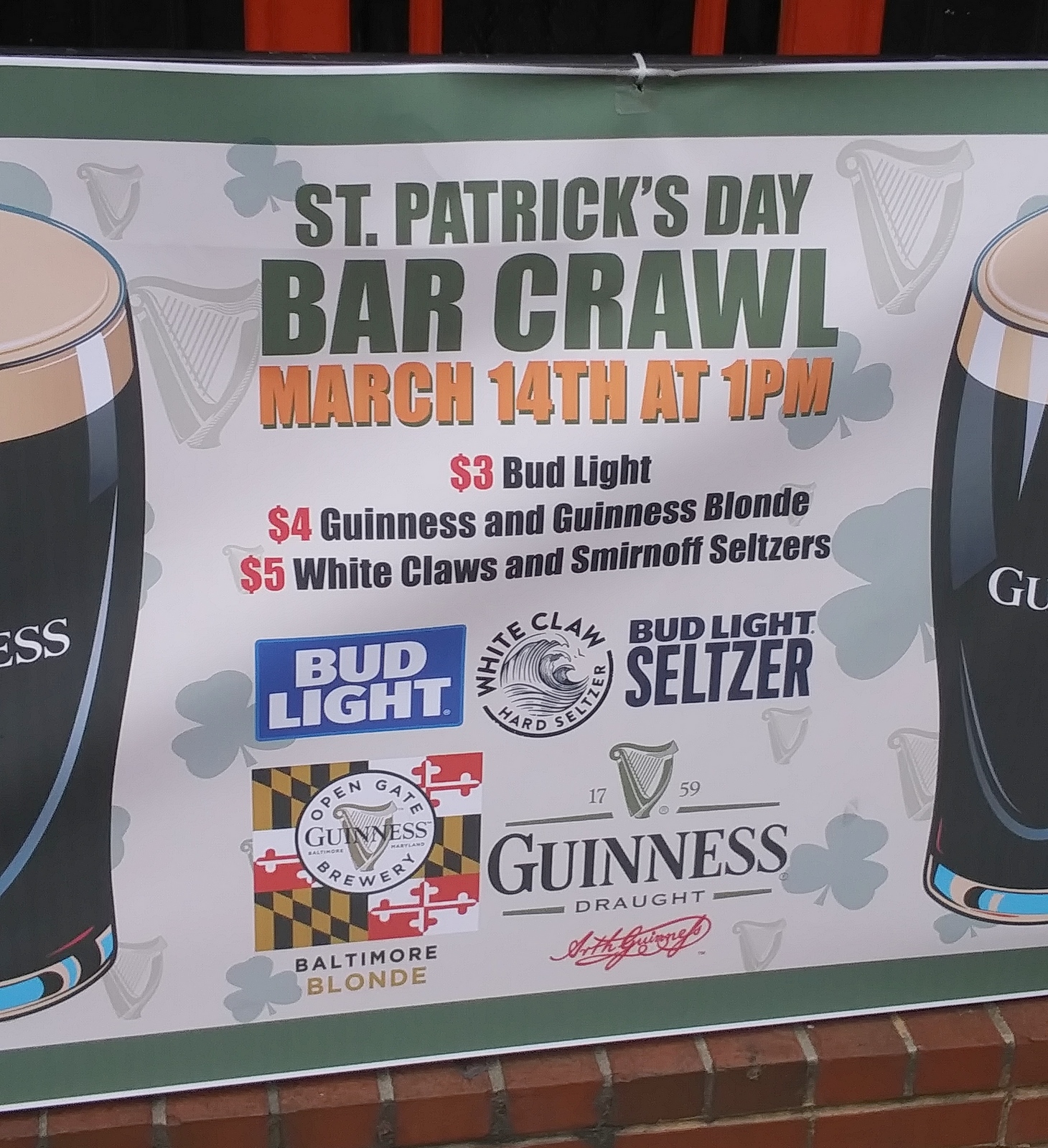 Some establishments still had signs up Saturday even though Lindy Promotions had cancelled the event. (Barbara Valeri)

Meanwhile other establishments announced closures over the weekend – a day ahead of the Hogan decree.

“My conversations today with workers and business owners have been heartbreaking”  – Zeke Cohen.

Cohen acknowledged that the closures would hit small businesses and their employees especially hard, but he but said they were necessary to prevent a public health crisis.

“Lives are literally on the line,” he wrote. “My conversations today with workers and business owners have been heartbreaking.‬” 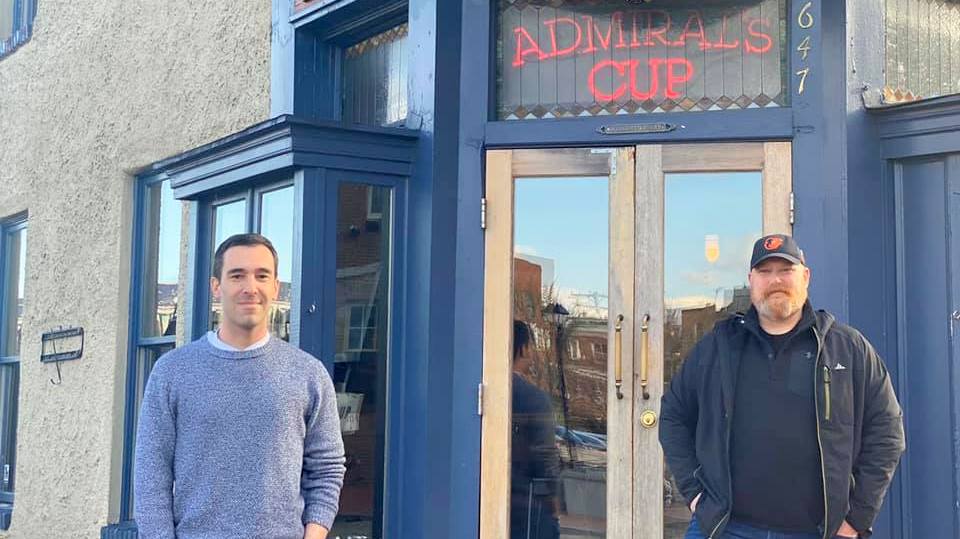 Councilman Zeke Cohen at the Admiral’s Cup Bar and Restaurant, one of the establishments that voluntarily closed amid the coronavirus pandemic. (Facebook)