Despite assurances that Cab Calloway’s childhood home in West Baltimore would not be demolished without a hearing, the property’s historic marble steps have been removed, leaving a gaping hole at the base of the building.

Last week, Brooks filed a last-minute appeal of the demolition with the Department of Housing and Community Development.

In response to the appeal, Jason Hessler, deputy housing commissioner, promised a hearing on the appeal before the Calloway house was removed as part of the teardown of the even side of the 2200 block of Druid Hill Avenue.

“This work will not impact 2216 Druid Hill Ave.” Hessler told Murphy, leaving unsaid the fact that the front steps of the Calloway house had been removed from the base of the rowhouse.

Email from HCD to attorney John Murphy on March 30 saying “we will not begin the demolition of 2216 Druid Hill Ave. at this time.” BELOW: Email from HCD to Murphy today (April 6) that demo work on the block had begun, even though an appeals hearing had not been scheduled.

Attorney: Appalled at the process

Hessler did not respond to questions from The Brew. Instead, the agency’s spokesperson, Tammy Hawley, said today that “demolition has not begun and will not begin on 2216 as a hearing needs to take place.”

The hearing has not yet been scheduled, Hawley said, a situation that attorney Murphy called “unsatisfactory.”

“I am appalled that the city would start demolition in the middle of this national emergency when Peter Brooks and I are unable to protest HCD’s actions. We can’t go to the courts to get relief because the courts, in effect, are shut down and nearly all legal matters have been put on hold.”

“We can’t go to the courts to get relief because the courts, in effect, are shut down”  – attorney John Murphy.

In his order mandating the closure of “non-essential” businesses to slow the spread of the coronavirus, Hogan did not specifically exempt demolition companies from mandatory closure.

The order, however, does allow commercial and residential construction companies to remain open. Hawley said demolition as well as construction work sponsored by HCD “continues at this time.”

Mayor: Comfortable with the process

Last week, mayoral candidate Thiru Vignarajah called on city leaders to hold off on demolition of the block until the coronavirus crisis is over.

He argued that there should be public hearings and a discussion about how a preserved Calloway house could be integrated into the Black Arts and Entertainment District along Pennsylvania Avenue and part of a broader revival of the Druid Heights area.

Mayor Bernard C. “Jack” Young, however, is comfortable with the processes put in place regarding the fate of the Calloway house, his spokesman, Lester Davis, said today.

Dismissing the need for public hearings, Davis said the building has been subject to numerous reviews by the local community and others.

“The mayor is not in the habit of usurping democratic processes. We want to allow folks to have their voices heard, and he is allowing that process to continue forward”  – spokesman Lester Davis.

“There is a process, and the agencies have been following that process. The mayor is not in the habit of usurping democratic processes. We want to allow folks to have their voices heard, and he is allowing that process to continue forward,” Davis said.

Young has been assured that the marble steps were preserved and “are not damaged or destroyed in any kind of way,” Davis added.

HCD spokeswoman Hawley said the marble slabs are being stored on a city-owned lot and the rowhouses on either side of the Calloway house will remain standing until after the permit appeals hearing.

At the same time, the 11 other rowhouses on the block will be demolished to make way for a park advocated by the Druid Heights Community Development Corporation.

Marti Pitrelli, a resident of Marble Hill who first discovered the historic link between the house and the famous bandleader, said removal of the front stoop bodes ill for any restoration of the house.

“The city removed the marble steps for ‘safekeeping’ because the park design calls for the steps to be retained and relocated in the park,” Pitrelli said today.

“I don’t believe that they are going to retain Cab Calloway’s house in the long run. Otherwise, they would not have removed the steps.” 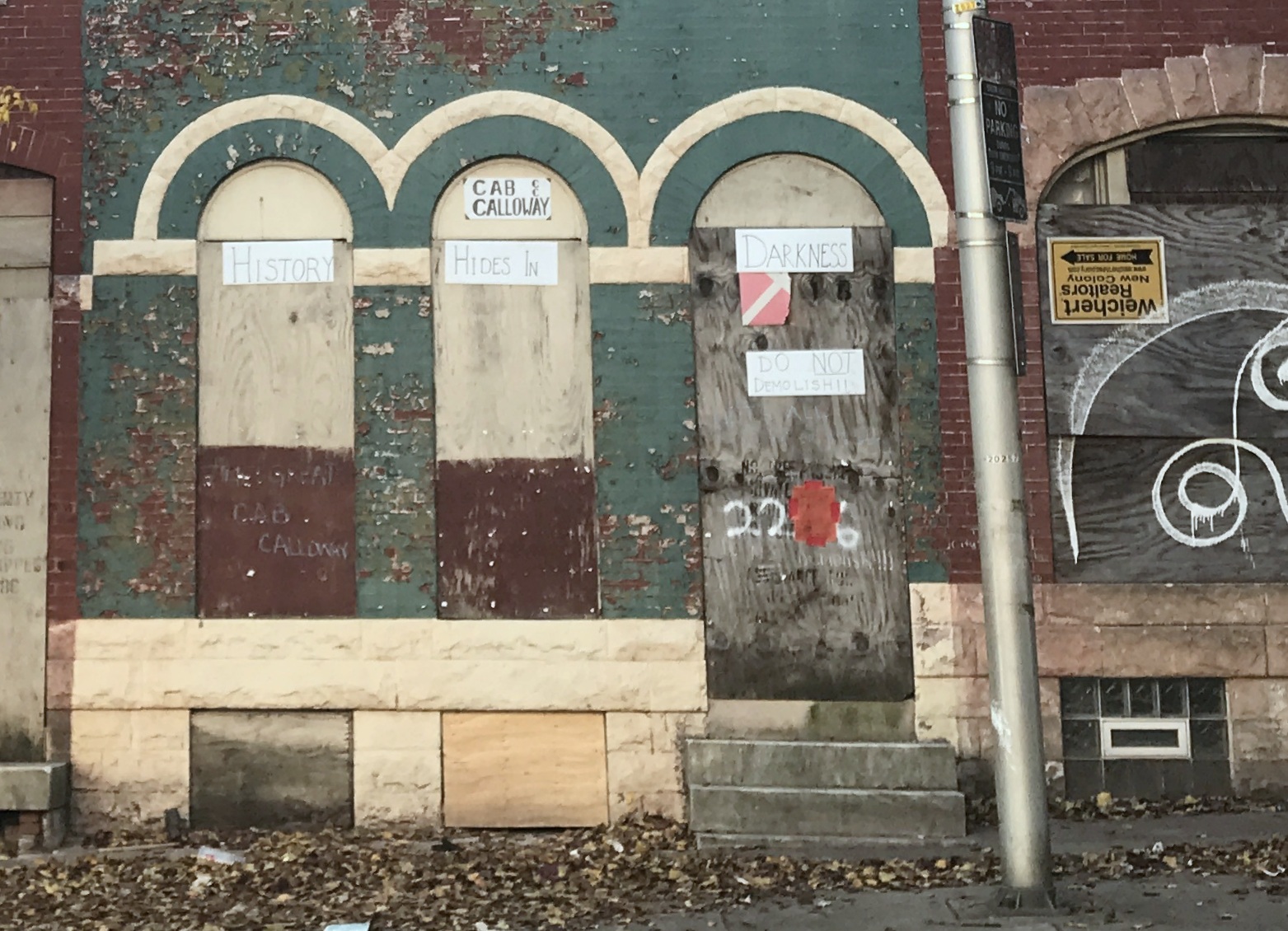 Front of the city-owned Calloway house prior to the removal of the front steps. (Mark Reutter)