The protest included a caravan of cars and trucks plastered with “Black Lives Matter” signs – horns beeping, fists thrust out of windows – and a crowd on foot chanting, “No justice, no peace, no racist police” and “When black lives are under attack, stand up, fight back.”

There the demonstrators were met by about 70 Baltimore Police in riot gear, where some tense confrontations erupted, including police at one point firing pepper balls. 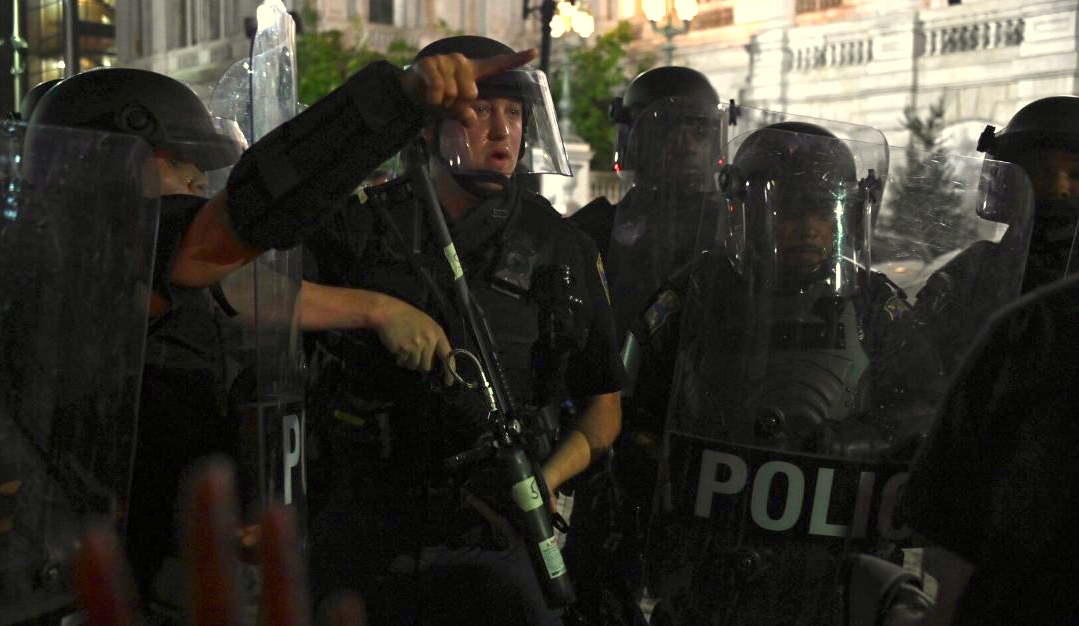 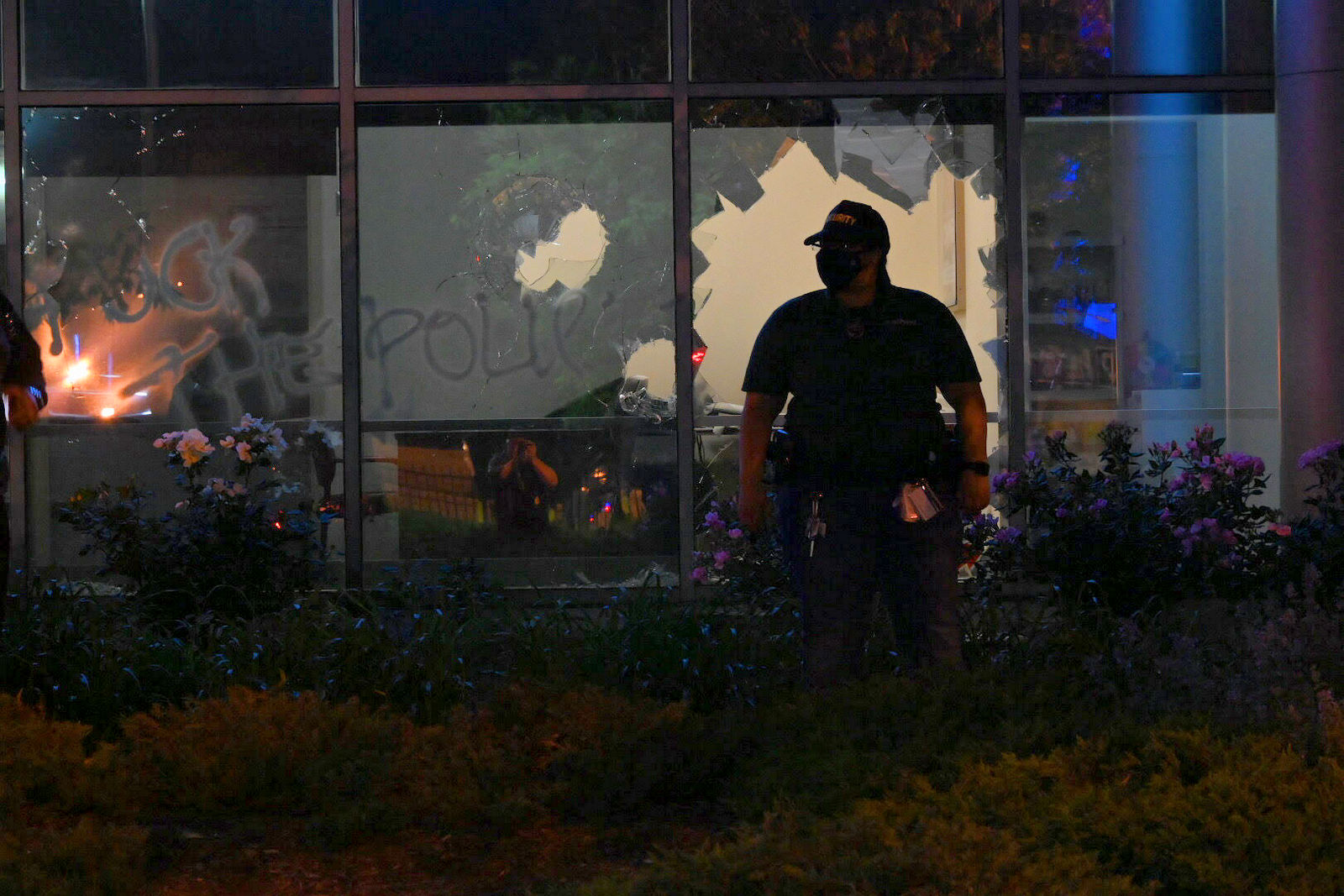 A window was smashed at the First National Bank building at 300 East Lombard Street. (J.M. Giordano) 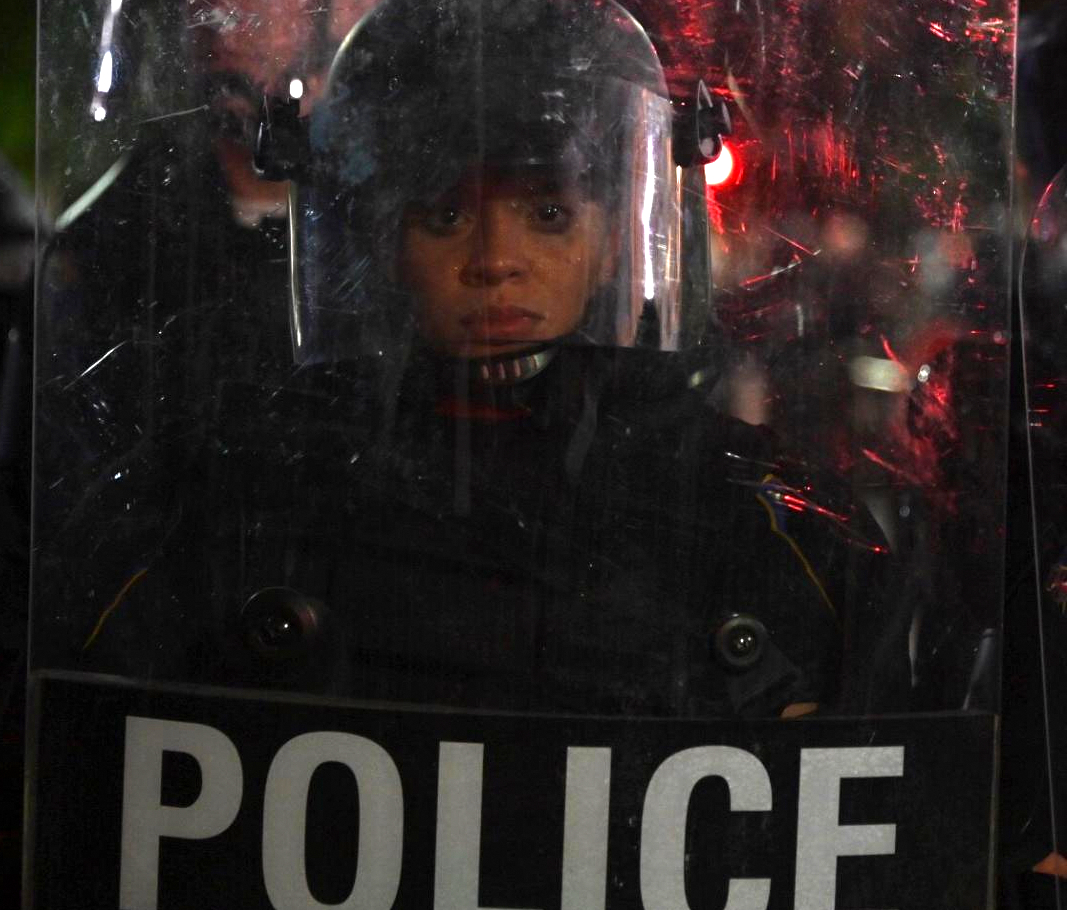 A city  officer watches demonstrators from behind her face shield. (J.M. Giordano)

There was no major reported property damage. A display window was smashed at a bank building on Lombard Street, and a police van was defaced with graffiti.

There appeared to have been no violent outbreaks during the confrontations downtown. (A widely circulated video showed some people throwing water bottles and a young woman telling them to stop.)

After yelling and pressing against police barricades at City Hall – and chasing off a TV crew – members of the crowd began dispersing about 10 p.m., many headed for the Inner Harbor. 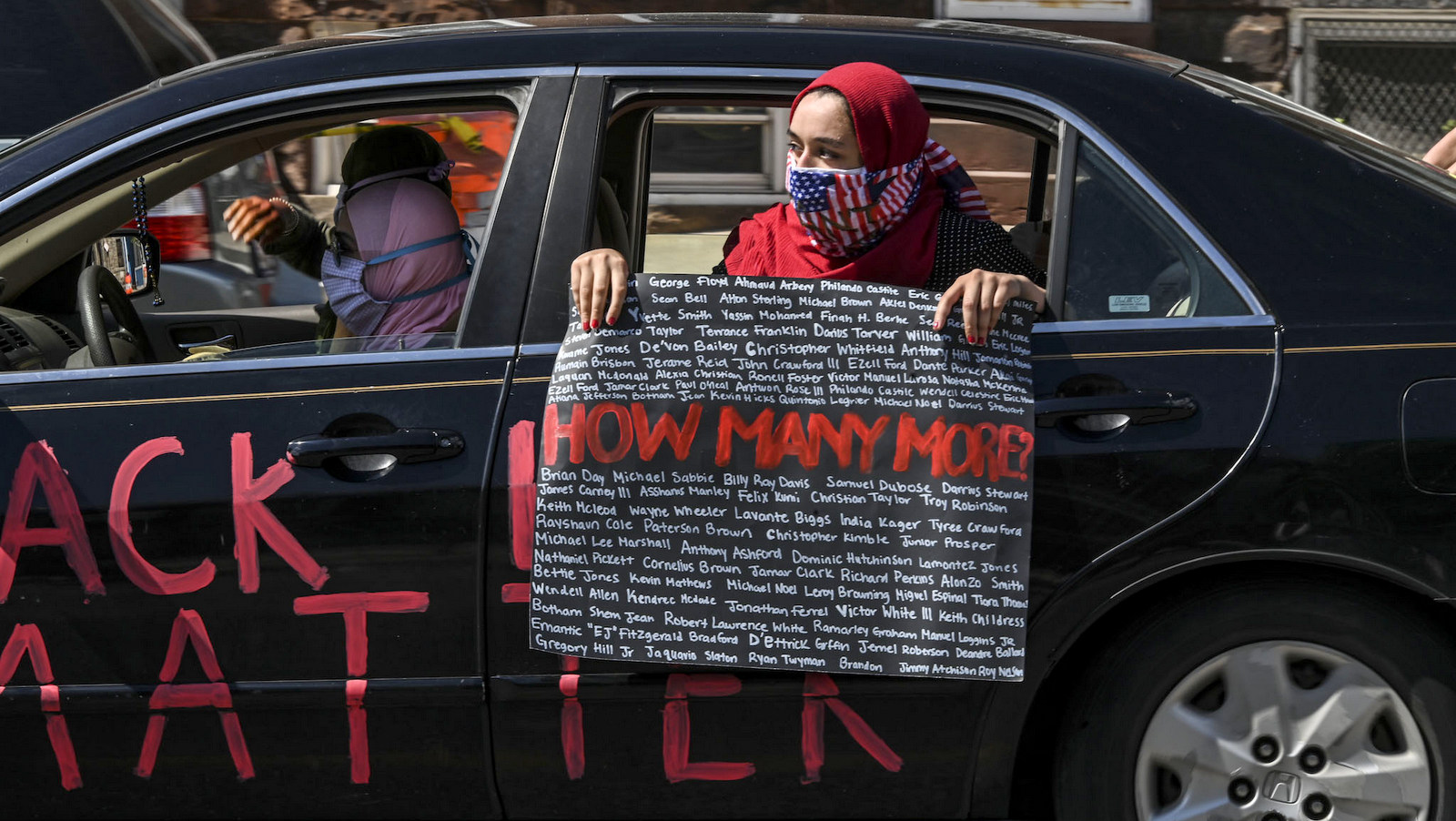 On North Avenue, a carload of protesters, masked to protect against Covid-19, express their anger at police brutality. (J.M. Giordano)

“You continue to kill us!”

Unlike dozens of other U.S. cities racked by rioting and looting, the demonstrations in Baltimore were overwhelmingly peaceful.

The mostly young, racially diverse crowd of marchers kept their cool. But what the day of action had on vivid display, for hours, was bristling anger.

The mostly young, racially diverse crowd kept their cool. But what the day of action had on vivid display, for hours, was bristling anger.

The march passed through Penn-North, the neighborhood that erupted five years ago when another young black man, Freddie Gray, died in police custody.

At those 2015 protests, sometimes known as “The Uprising,” signs bore the names of previous victims of police violence.

Yesterday’s march had new names along with that of Floyd, who died after a Minneapolis police officer knelt on his neck for over eight minutes as he lay on the ground, handcuffed.

“You continue to kill us! Why? Why?” one man’s sign read.

“It’s a generational thing. If we don’t stand up to this injustice, it will continue to go on,” said 24-year-old Malik Turner, who is a resident advisor for a dorm at Towson University.

“If we don’t stand up to this injustice, it will continue to go on”  – Malik Turner.

“The way I see it, the whole government is here to protect the cops,” he said. “This is the best way to use our voice – show we’re tired of this and empowered to move forward.” 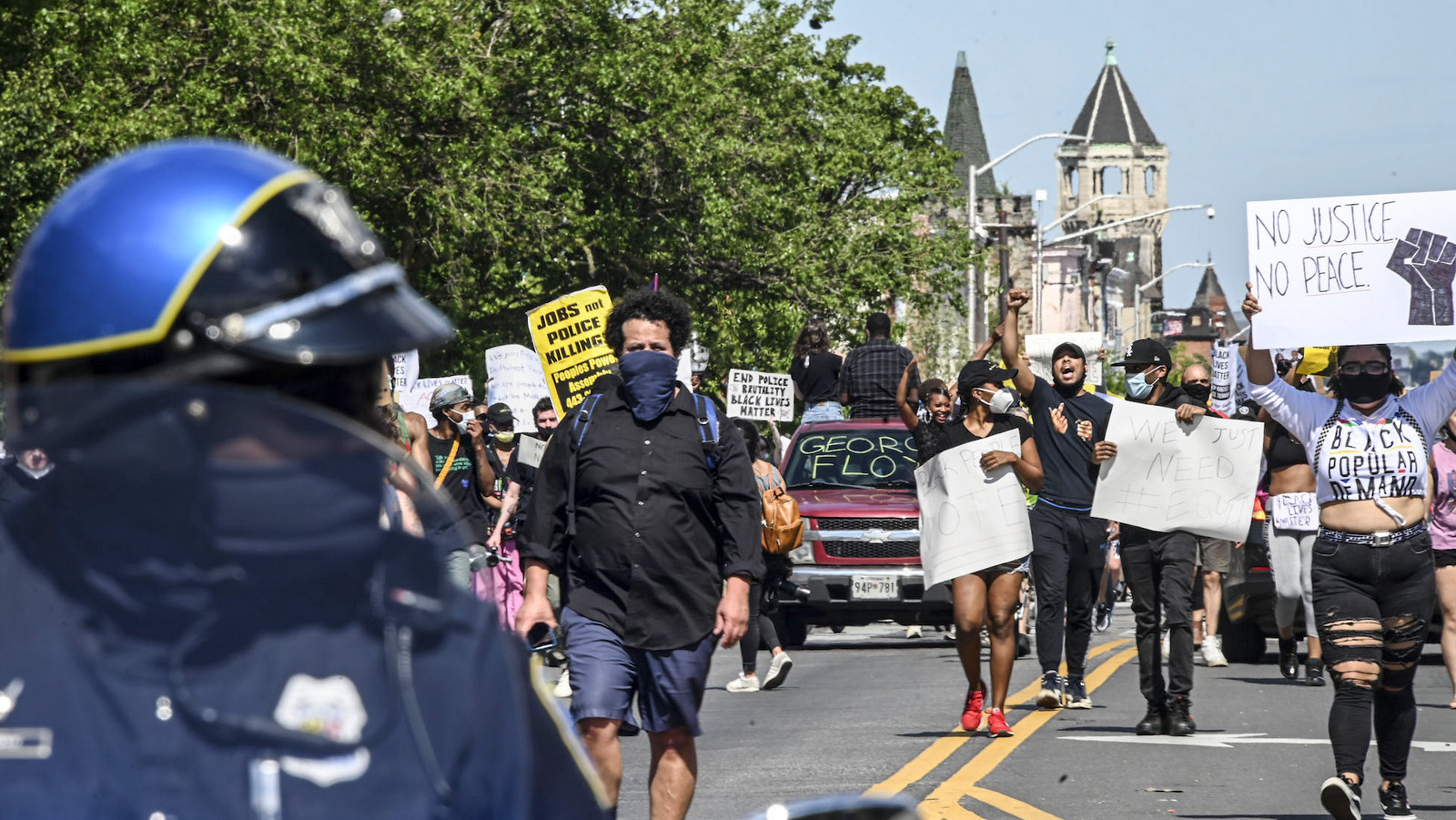 “Nothing seems to change”

The failure of Minneapolis authorities to immediately fire and charge the four officers involved in Floyd’s violent arrest was especially frustrating for Shaun Crombey.

“We march all the time and nothing seems to change,” said Crombey, 26, who’s originally from Philadelphia but has lived in Baltimore for the past eight years. “It comes to a point where you can’t take it anymore and you get angry.” 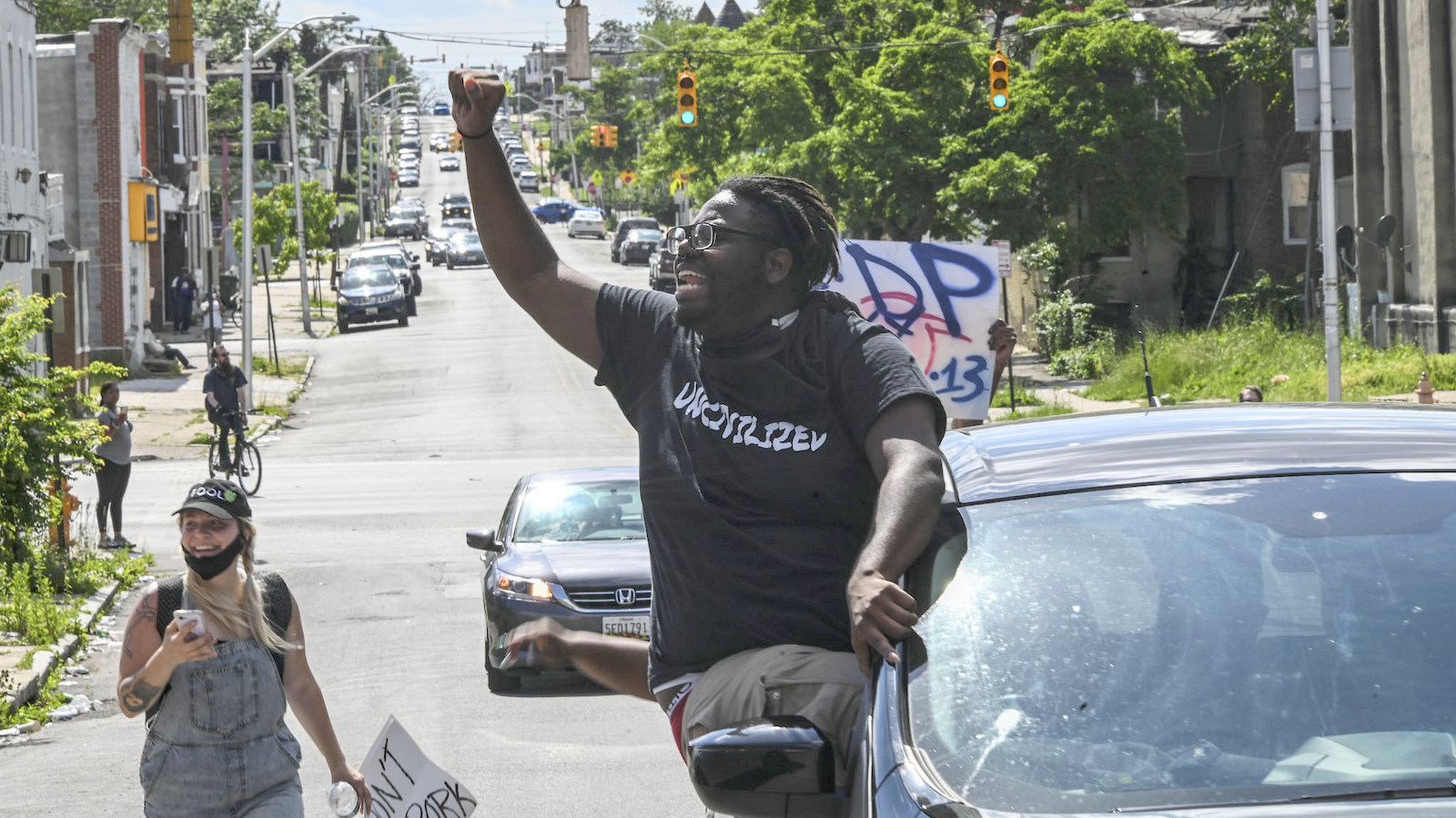 “Racist people have come out of the woodwork and are a lot more bold with it,” Crombey said.

“I hadn’t had to deal with racism since forever, but now it’s small things. Like you see a lady you’re walking behind clutch her purse in response to you. Those sorts of things piss you off.”

“Growing up with a lot of black people in my life, seeing how my experience is so different from theirs, this was incredibly painful,” he said.

“Every black student I’ve taught has a story of something the police did to them, whether it’s an unnecessary stop or arrest,” he said. 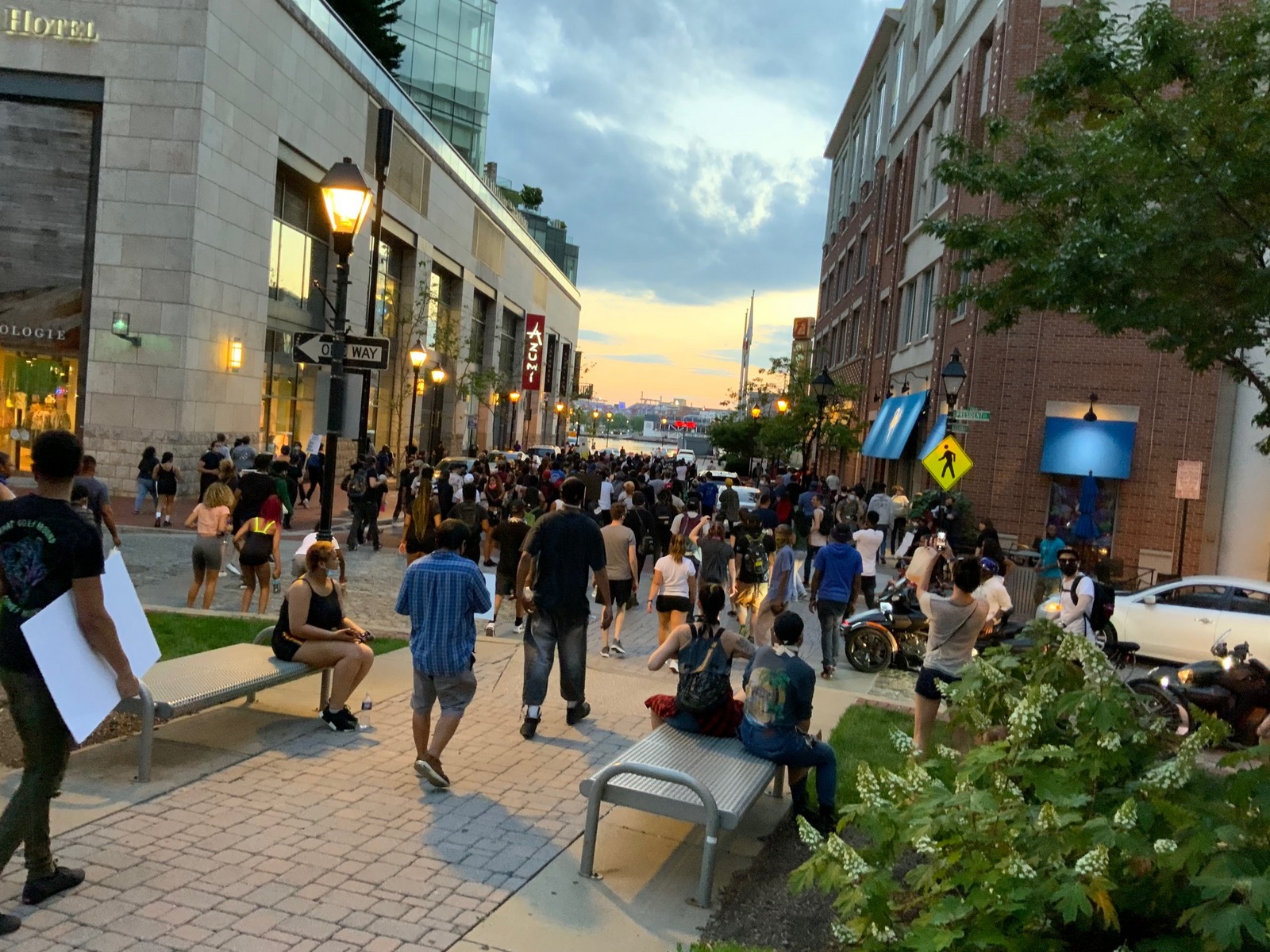 Marchers past the National Katyn Memorial, which commemorates the victims of a 1940 massacre of Polish nationals by Russian forces, at Harbor East. BELOW: a protester scoots past outdoor diners on Lancaster Street. (Fern Shen)

Stand up, Push Back

In some of the places the protesters marched, their presence was jarring.

In upscale Harbor East, where restaurants were open for the first time in months, they passed by dressed-up diners sipping their wine and eating their entrees.

In neighborhoods away from the waterfront, the protesters were greeted with raised fists and cheers. In Sandtown, a city trash truck driver leaned on his horn.

“It’s a breath of fresh air. I’m glad my kids are getting to see this,” said Trina Ross, who was sitting on her front step with her father and three children snapping pictures.

“It’s time people stand up and push back. It’s the only way things are going to change.” 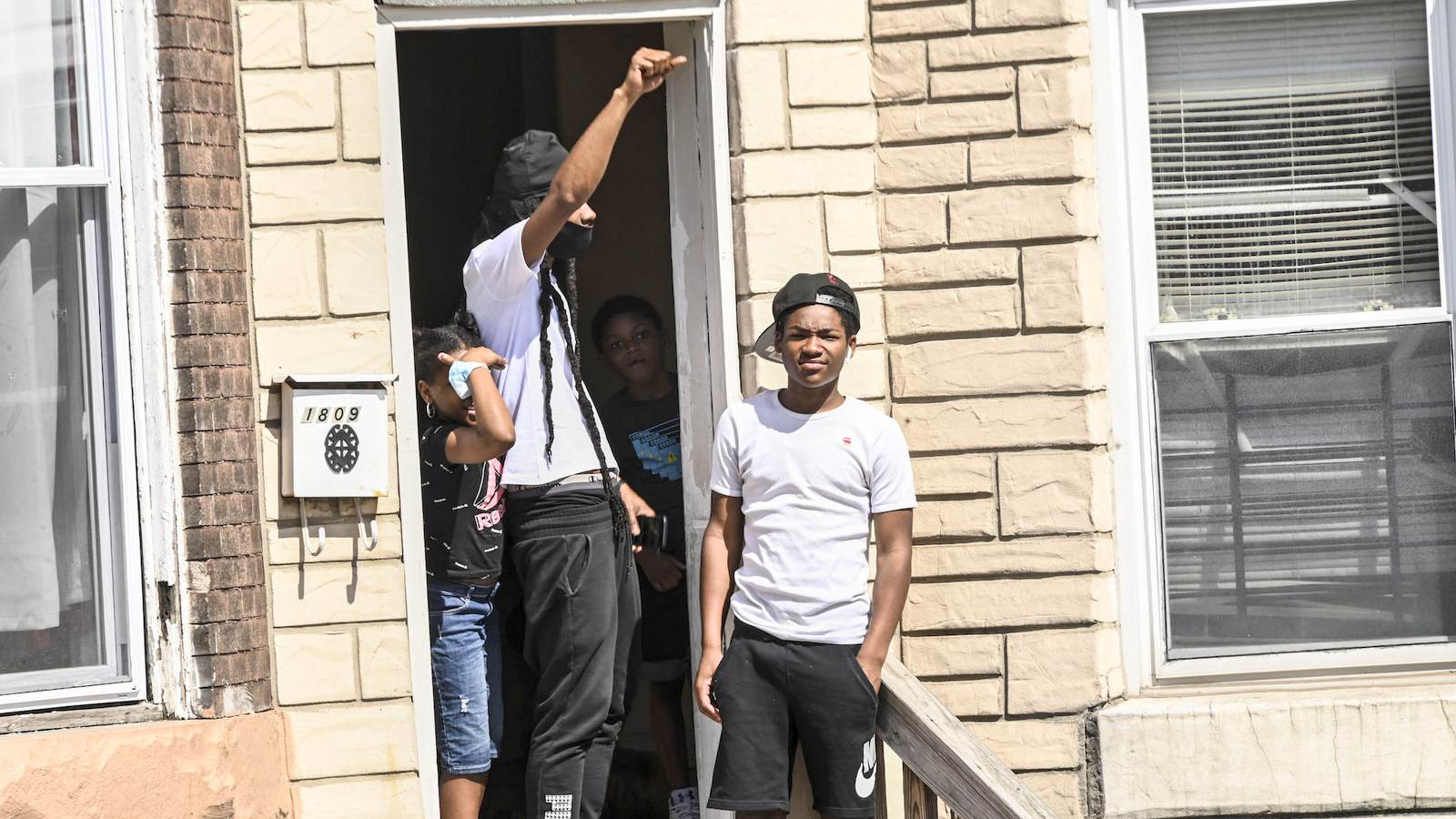 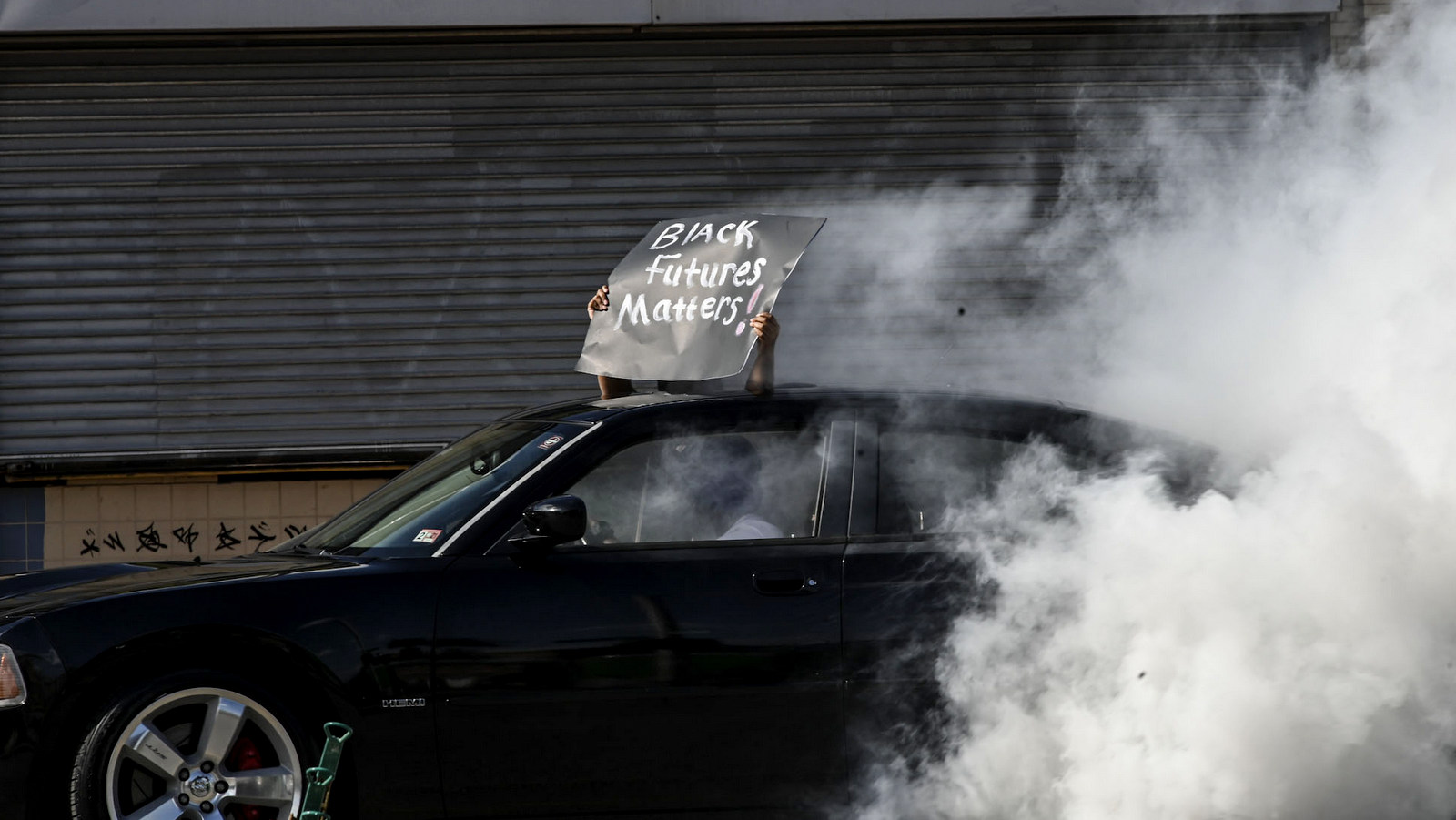 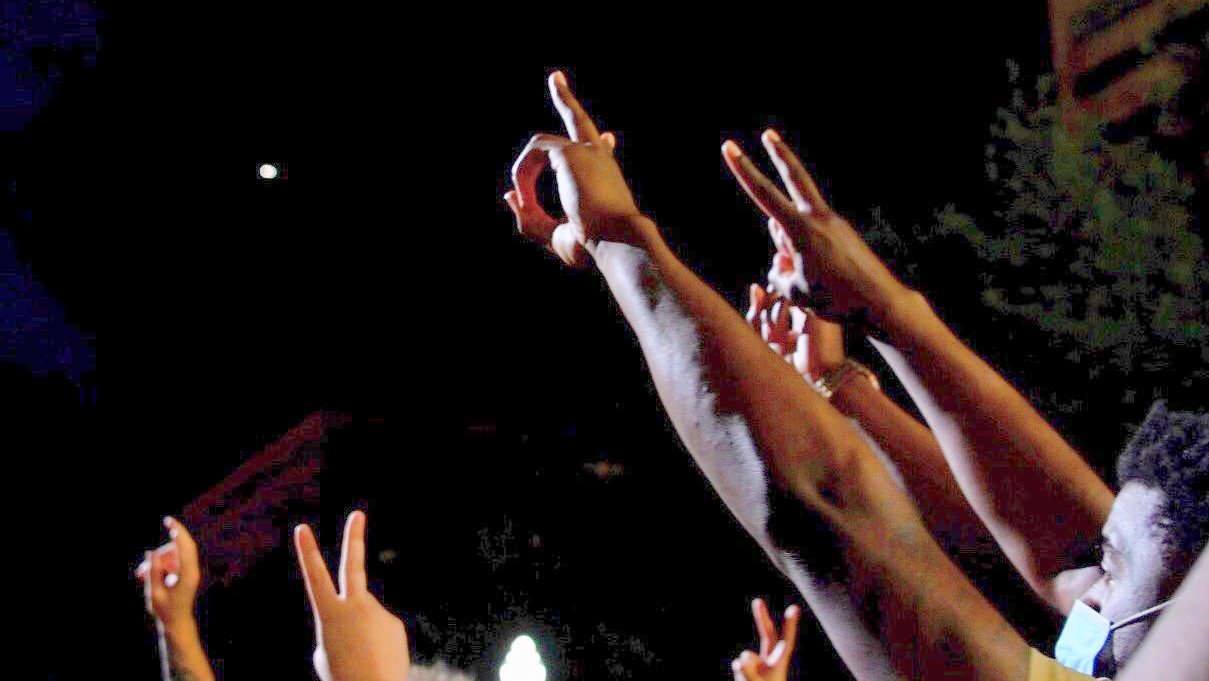