Over the weekend, city residents were distracted by local and national protests over police brutality, busy with day-to-day chores complicated by Covid-19 and, to a remarkable degree, unsure about whom to vote for as Baltimore’s next mayor.

Lawrence Logan, a 40-year-old sheetrock worker on disability from the military, said he was unimpressed with all six leading candidates.

Living in Baltimore has made him cynical about all city politicians who, in his view, become “compromised” after they get into office, especially of late.

“I regret voting for Catherine Pugh. Jesus!” he said, referring to the ex-mayor who is awaiting the start of a three-year prison sentence after pleading guilty to corruption charges. 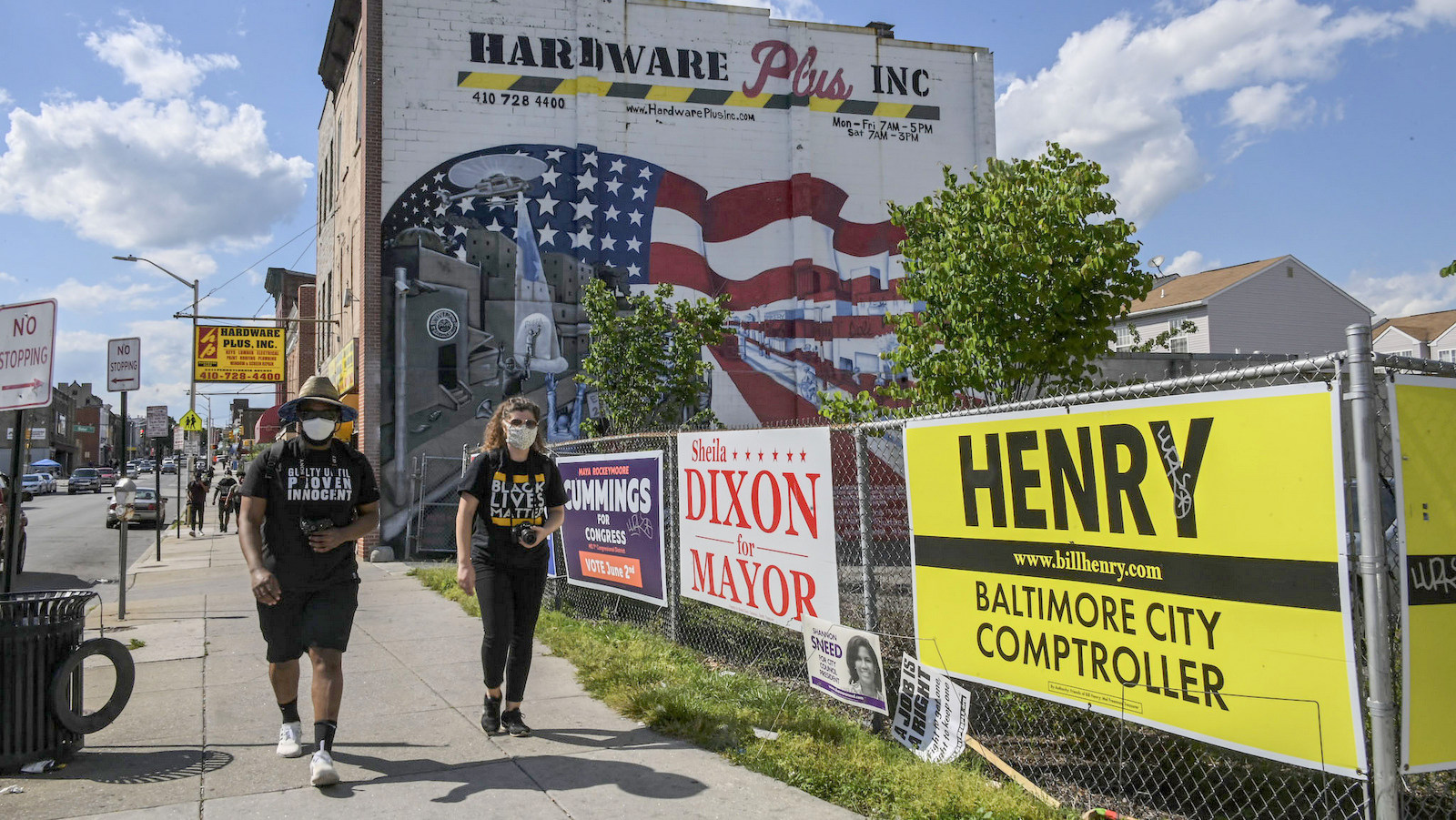 Campaign signs for the 2020 primary in West Baltimore. (J.M. Giordano)

“And I can’t vote for Sheila. She stole from the poor, she stole from children,” he said, referring to Dixon’s embezzlement conviction for taking gift cards intended for poor children and using them to buy items for herself.

Logan said he plans to vote, but hasn’t yet figured out who to select. “I’m going to get on the internet and start researching it,” he vowed.

None of the Above

Another shopper, who identified herself as “TT from 21215 – I’m a frontline worker,” said she would not be voting at all.

“At the end of the day, people are still poor, and the schools are still messed up,” she said.

Disgusted voters like “TT” may be a lost cause, but undecideds like Logan could be important swing votes in a race in which there are no clear frontrunners. 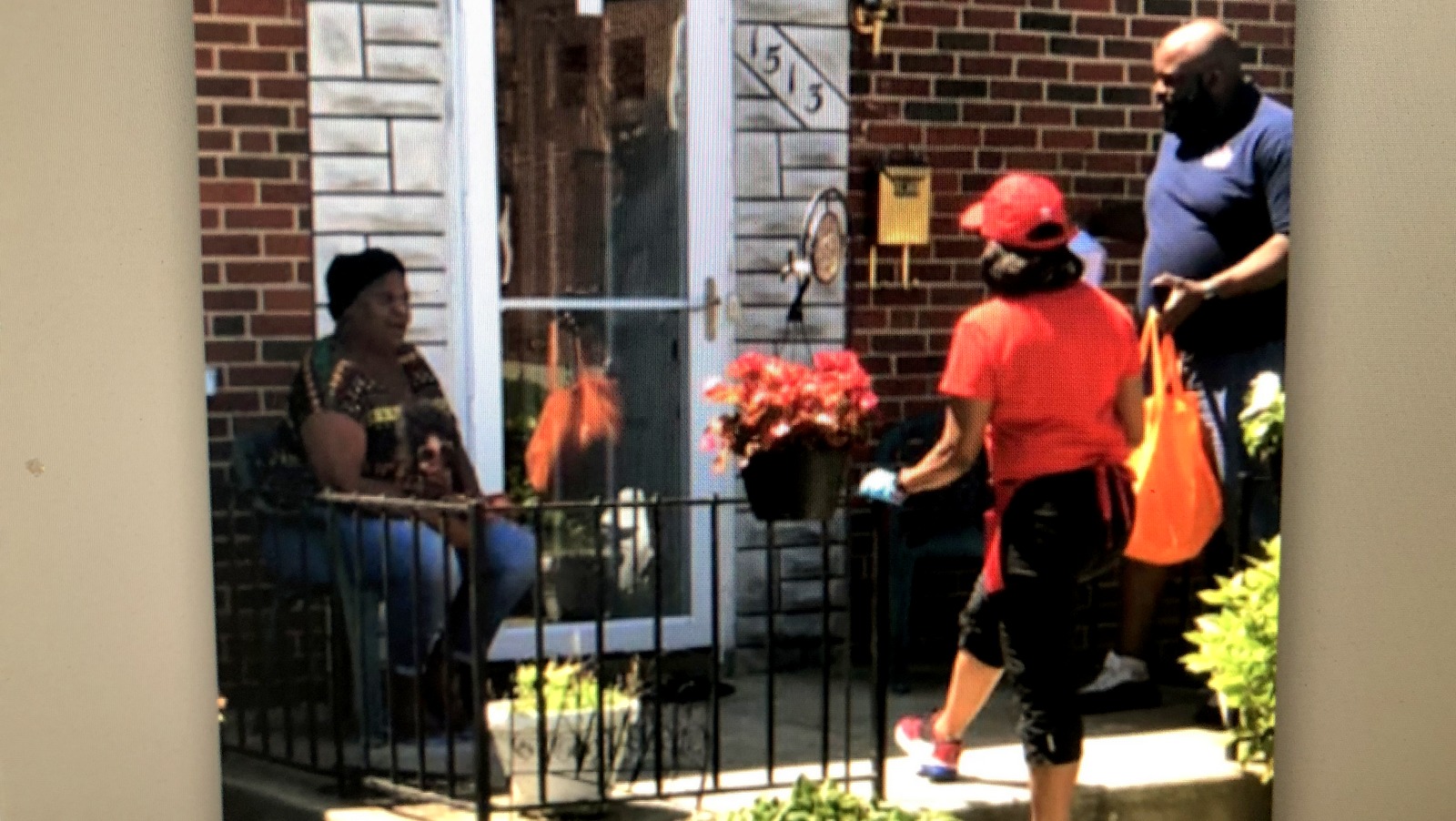 Over the course of a sunny weekend, the campaigns courted such voters by crisscrossing the city with horn-blowing dump trucks (Dixon) and truck-mounted LED-signs (Scott).

Others greeted voters at parks (Vignarajah), a farmers’ market (Miller) and at city intersections (T.J. Smith).

The campaigns and their associated PACs (political action committees) have been airing ads on TV and social media, mailing out the last of glossy mailers, and bombarding  cellphones with robocalls and texts, sometimes from the candidate and other times from the latest celebrity endorser.

“I’m historian Taylor Branch,” the Parting the Waters biographer of Martin Luther King Jr. said in a robocall on behalf of Miller. 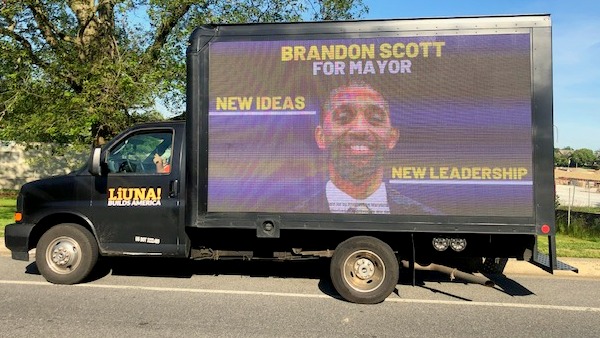 A truck from the Scott campaign near Druid Hill Park. (Fern Shen) 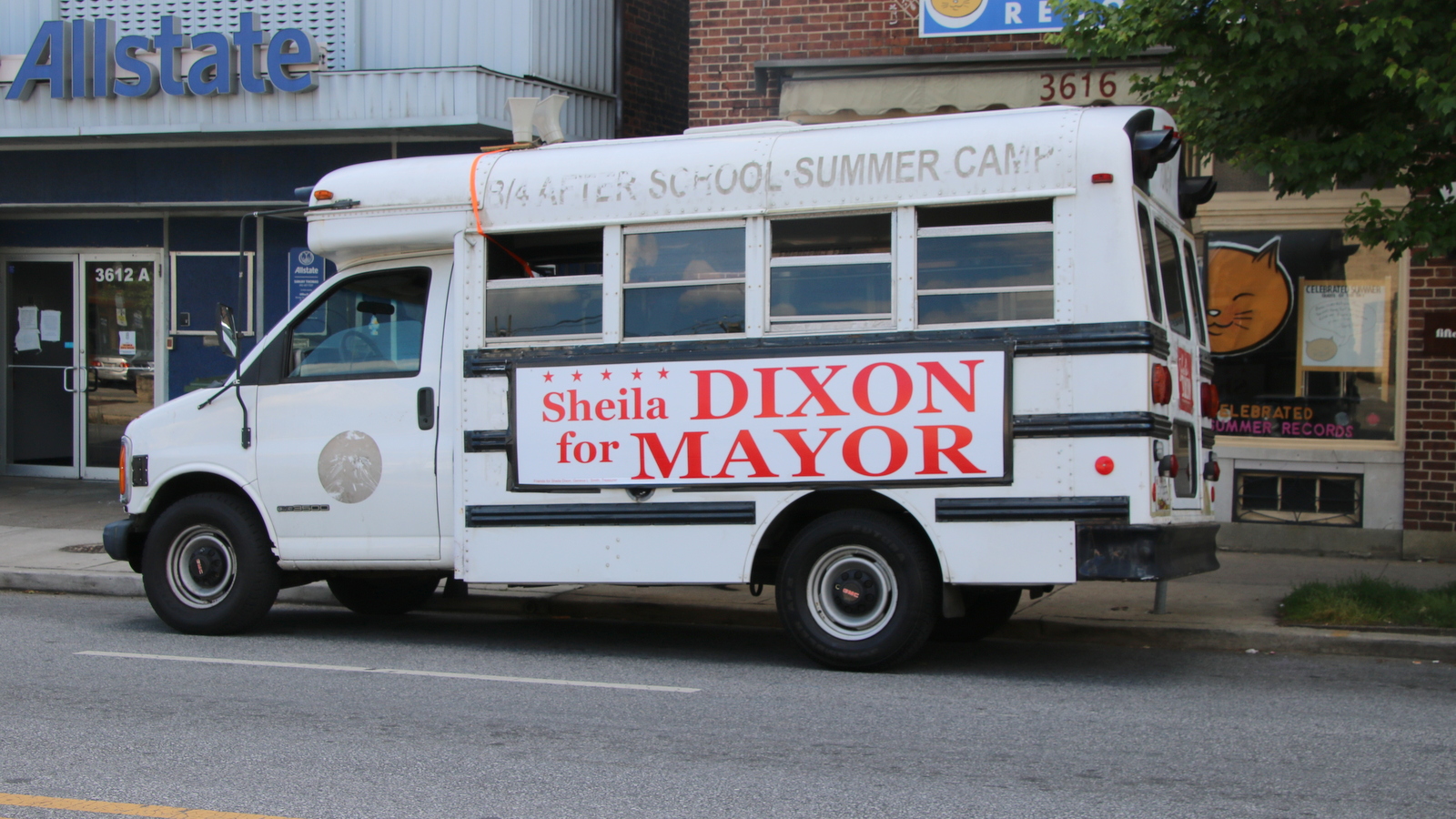 Some of the last-minute calls appeared to be trying to counteract the candidate’s perceived weakness.

Speaking on behalf of 36-year-old Scott, former NAACP president Ben Jealous notes that he was just 35 when he became the organization’s youngest-ever president. “I know what happens when rising leaders are given the chance to lead,” Jealous says.

Vignarajah, whose candidacy was hurt by revelations about his behavior during a September police stop, reiterated promises to cut taxes and reduce homicides, then added this message:

“Look, I’m not perfect, but I will never steal from you.”

Asked about their strategy in the closing days, candidate spokesmen say they have been “educating” voters because information about the city’s first mostly mail-in election, due to the pandemic, fluctuates daily.

“People are stuck in their homes; how do we reach them there,” Cooney asked. “Our No. 1 priority is providing people with information.”

“Crime is still the No. 1 issue and is what is on most voters’ minds most days,” said Ann Beegle, Miller’s campaign manager.

“All of us would love to be knocking on doors and doing retail politics,” Beegle added, perhaps unaware that Dixon’s camp has been tweeting photos of her talking to voters on their doorsteps and leaving literature at their doors.

Weighing the Pros and Cons

Some voters said they don’t need extra educating. Genova Johnson, 73, shopping at the Home Depot off of Reisterstown Road, said Dixon was her choice.

“Everybody makes mistakes, that’s how we grow,” Johnson said, addressing the gift card scandal without being asked.

An 83-year-old shopper in Howard Park, who declined to give her name, said she “had a hard time picking,” but in the end marked Bernard C. “Jack” Young, the current mayor, on her mail-in ballot.

Dixon, she said, carried too much baggage, and Scott was “too young” and “hasn’t done anything but form committees.” She described Young as “harmless” and said he had shown improvement in his job performance. 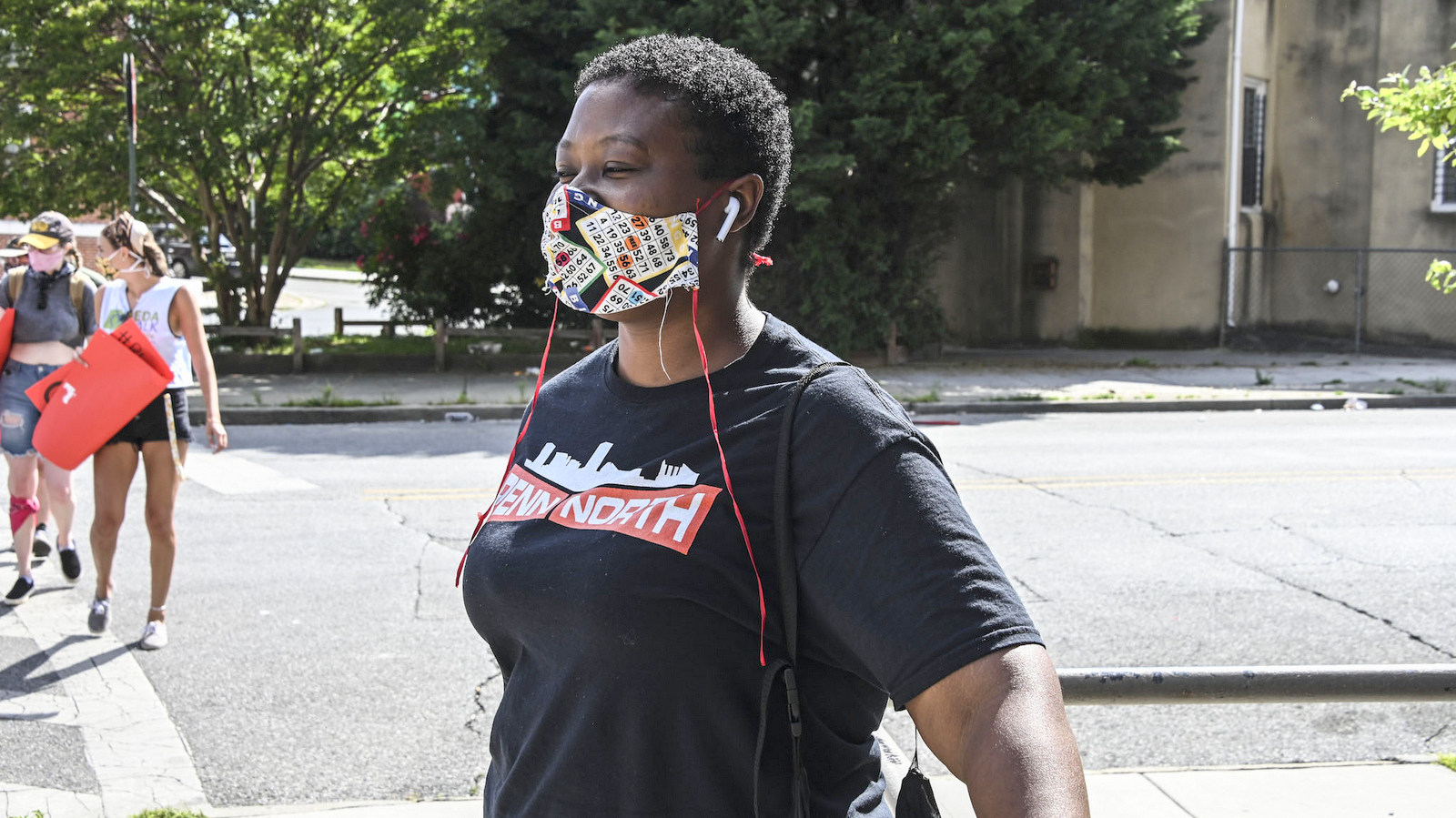 In Sandtown, meanwhile, Maria W. said Scott’s youth was one of the reasons he appeals to her.

“I watched him in City Council. His issues are my issues.” She said she is an ex-offender, “but that doesn’t define me. I made some mistakes, but that’s just one part of my story.”

She said she thinks Scott would do more to promote jobs and education for returning citizens like herself to get back on their feet.

Undecided voter Dominick Neverson, 40, a forklift operator from Southwest Baltimore, said he feels the city is going downhill and in need of good leaders but is not sure anyone he votes for is going to change things.

“The schools are terrible. Everything is outdated – the buildings, the textbooks, the auditorium,” said Neverson, who has three children in city schools. 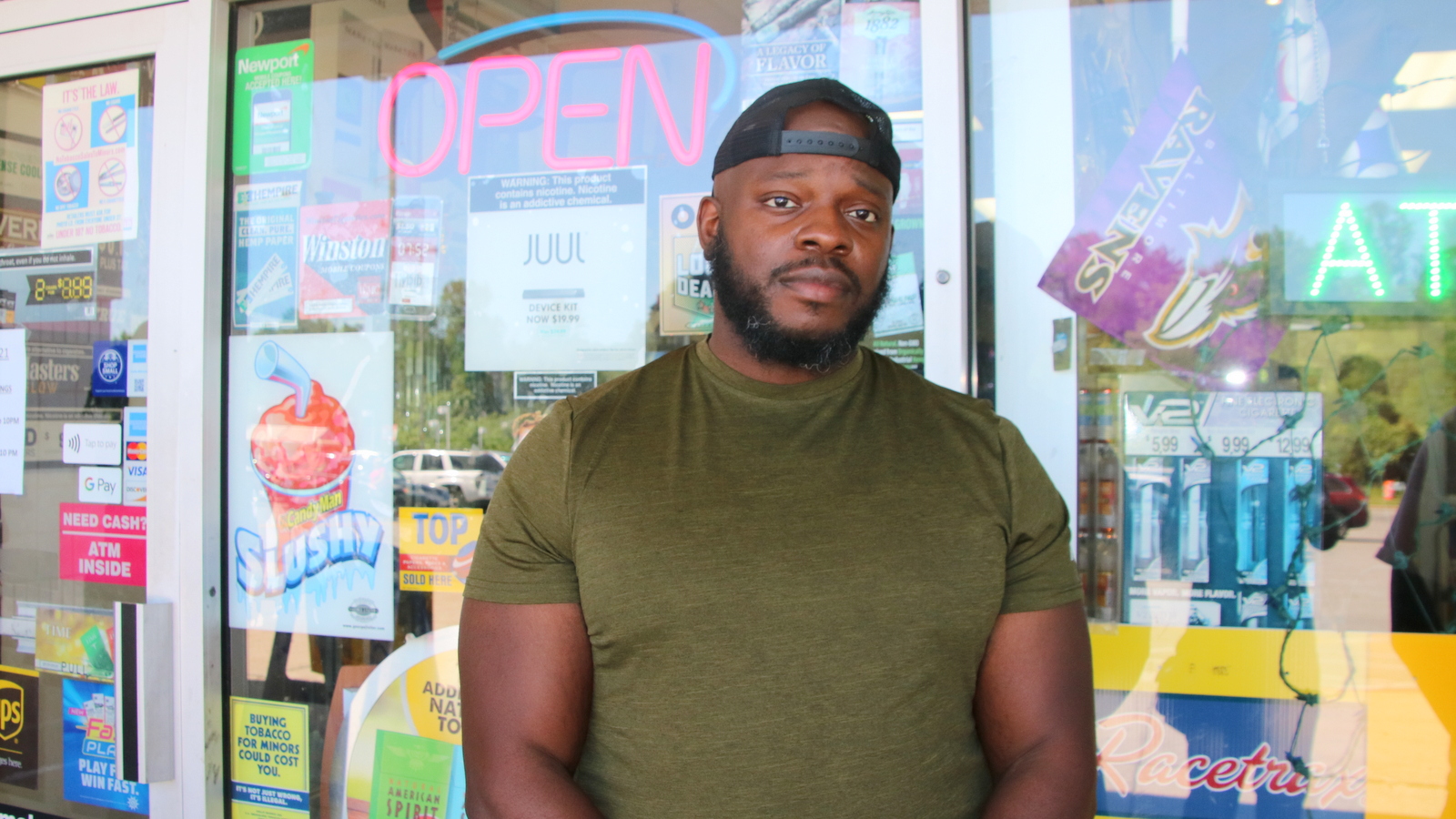 Outdated schools were the major concern for Dominick Neverson as he ponders who to vote for in the 2020 primary. (Fern Shen)

Tyrone Smith was picking up trash outside of the house he owns in Penn-North. He had no hesitation when asked who he is voting for.

“Sheila Dixon was a good mayor before she ran into those problems,” the 61-year-old former Johns Hopkins Hospital technician said.

“Sheila Dixon was a good mayor before she ran into those problems.”

He said he was confident Dixon could solve the two biggest problems in his neighborhood – drug dealing and violence. “She’ll figure out which police are the good ones and bad ones, though that may take a while.”

Mary Miller “was good enough for Barack, that means something to me.”

Others in Penn-North were also considering Dixon, but hadn’t yet counted out other candidates.

“I’m picking between Sheila and Mary Miller,” said a man serving up snowballs at a busy North Avenue stand. If the former Obama Administration treasury department official “was good enough for Barack, that means something to me.” 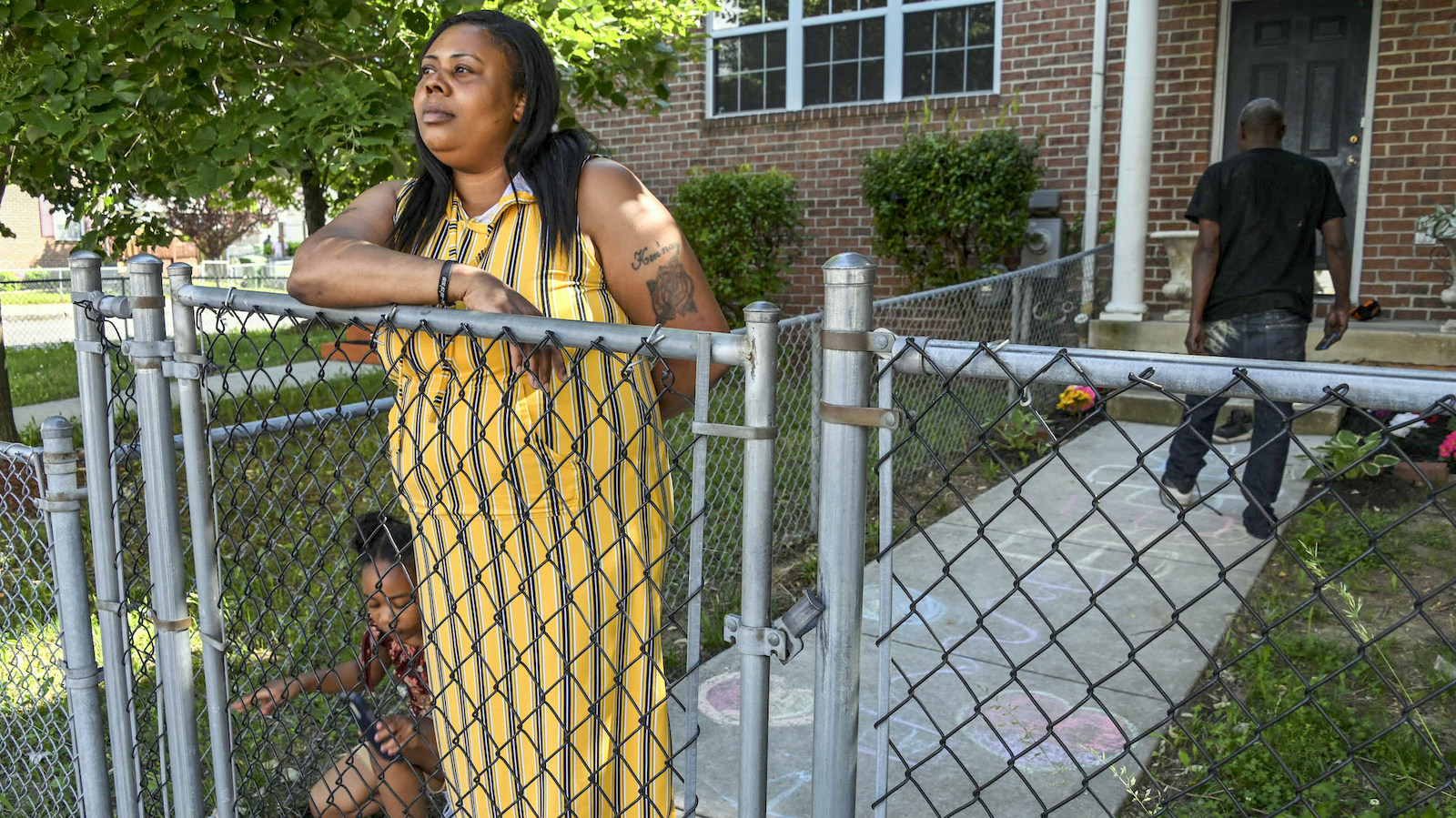 Left with a Bad Taste

“If I let you in my house and you steal, why would I let you back in?” he asked. A West Baltimore resident who works as a machine operator in Dundalk, Robinson worked his way to other candidates.

“Jack Young? That’s a ‘no.’ The man is inarticulate!” he exclaimed.

Like many people The Brew encountered, Robinson said the misdeeds of Pugh left him soured on city politicians in general.

“On her picture at City Hall it should say ‘thief,’” he said.

As to whom he might vote for, Robinson was narrowing it down to “somebody who’s not going to steal from us,” saying he wasn’t sure who that might be.