Now running second in the June 2 Democratic mayoral primary, Dixon expressed no intention to The Brew of returning the $6,000 she received from the political action committee established by Lodge 3 of the Baltimore FOP. Nor was she interested in donating the police funds to criminal justice reform groups.

Some New York lawmakers have pledged to use police union money they already accepted to underwrite activist groups and bail funds.

Dixon is one of three mayoral candidates who picked up maximum contributions of $6,000 from the police PAC on April 24. Former prosecutor Thiru Vignarajah and former Baltimore Police spokesman T.J. Smith are the others.

Current front runner Brandon M. Scott. as well as Mary J. Miller and Bernard C. “Jack” Young, did not receive funds from the police PAC, although Young picked up $4,500 in PAC contributions in past election cycles.

In total, Dixon has accepted $16,600 from police groups since 2005, according to Maryland State Board of Elections data.

When she ran for mayor in 2016, the police PAC contributed $2,000 to her campaign and the Baltimore Retired Police Benevolent Association chipped in another $500.

Asked if she would return or donate the police donations she got during this primary, Dixon gave this statement to The Brew:

“My campaigns over the years have consistently been primarily funded by average citizens that are reflective of the racial make-up of a diverse Baltimore. I have always supported local community groups and organizations that fight for the civil and human rights of all area residents, including that of citizens that look like me. It didn’t take the recent set of events for me to understand the realities of racial injustice and the impact that has on communities of color, since I have had to live with those realities my entire life.”

The Brew reached out to all the elected officials and candidates who accepted contributions from the police union in the last two years.

So far, only Dixon has answered. We will publish the responses of the other politicians when we receive them. 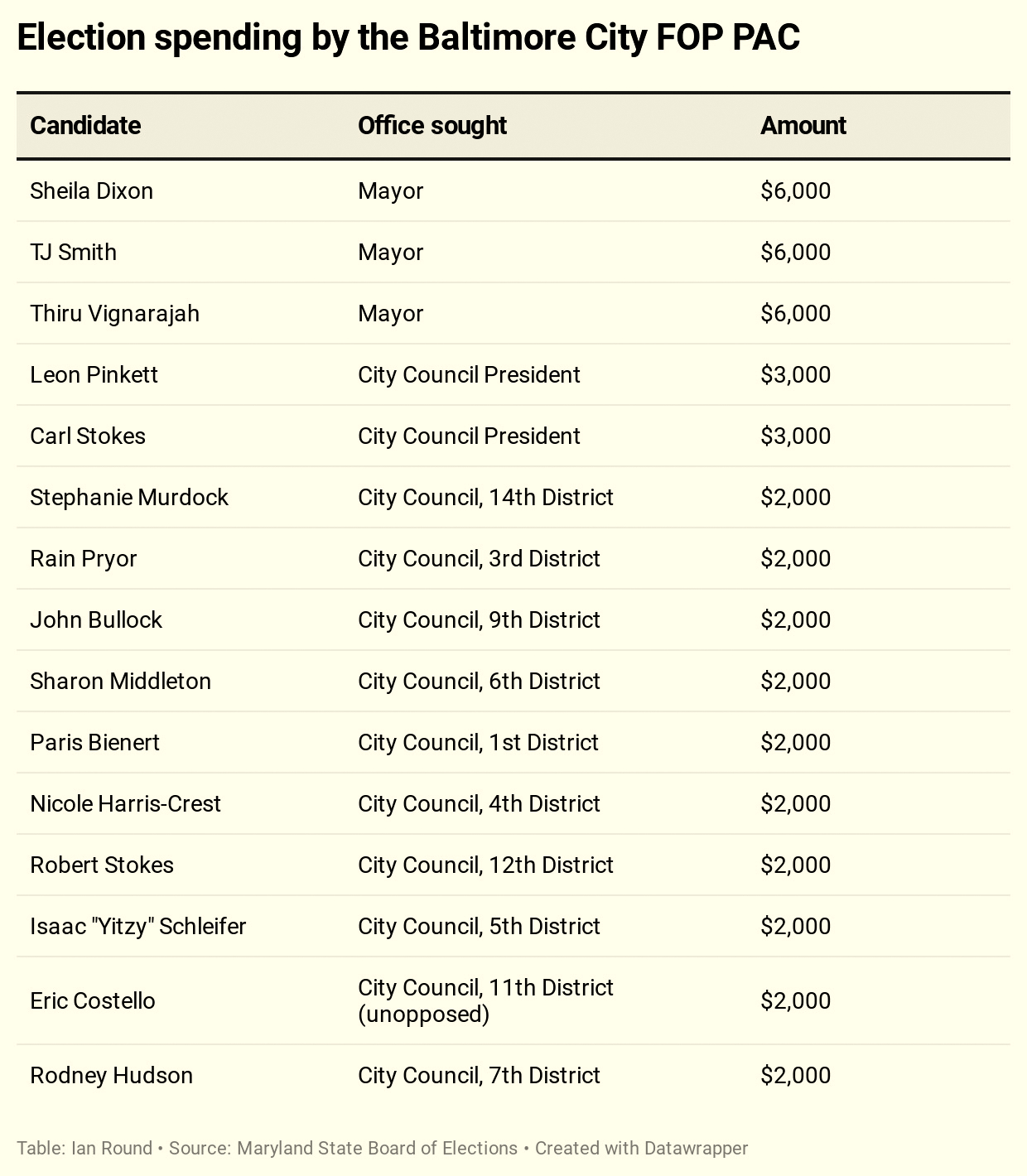 In the race for City Council President, the FOP gave $3,000 each to Councilman Leon Pinkett and former Councilman Carl Stokes.

The police union also gave $2,000 each to 10 Council candidates, and spent over $4,500 for a mailer in support of Rain Pryor, who challenged Councilman Ryan Dorsey in the 3rd District.

The Baltimore City FOP, for example, gave Maryland Senate President Bill Ferguson $3,500 between 2010 and 2013, while the Baltimore County FOP gave him another $1,000 last November.

The Baltimore County FOP additionally handed out $3,000 to Adrienne A. Jones after she became Maryland House Speaker last year. 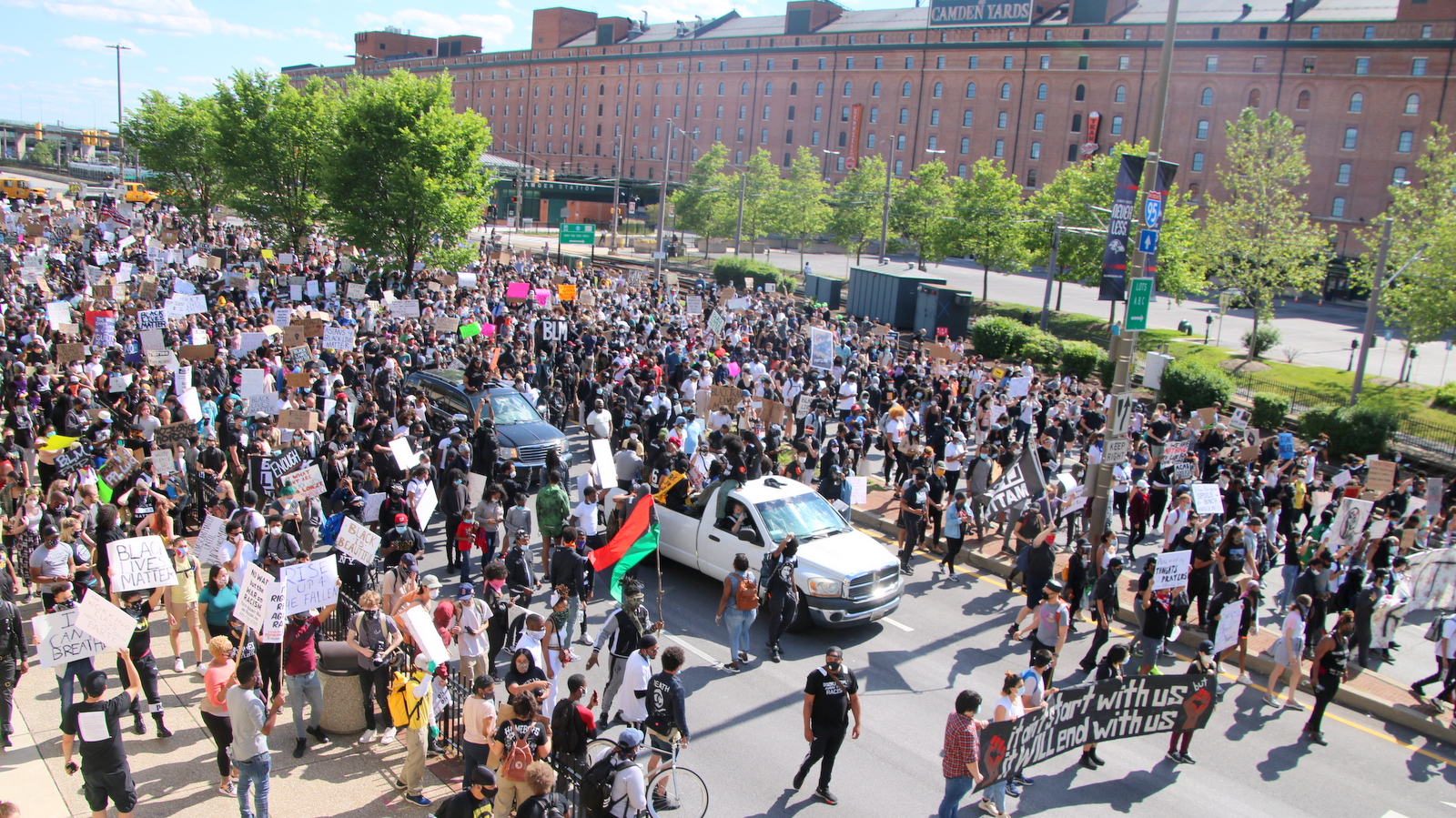 The hundreds of thousands of Americans who have taken to the streets in the wake of the death of George Floyd, a black man in Minneapolis, reflect a sharpening of the public debate over police brutality.

The focus of elected officials had been largely on reforming police departments, particularly through consent decrees with the U.S. Department of Justice, like the one put in place in Baltimore after the death in police custody of Freddie Gray five years ago.

Now with unarmed black people continuing to be hurt and sometimes killed by police, there are calls for more systemic change.

These include shifting spending away from police to social services and other community support, placing heavy restrictions on the use of force by police, and reforming laws that protect officers from the legal consequences of their misconduct.

Such reforms, however, are hard to pass at the state and municipal level, in no small part because of the political clout of police unions.

Based on the absence of public statements so far, Baltimore’s elected officials don’t appear eager to follow the lead of New York State Senator Michael Gianaris, who says he donated $16,650 in police union contributions to bail funds and mutual aid.