The warning that activists will try to knock down Baltimore’s Columbus monuments was issued explicitly and publicly on Twitter:

“We don’t think these Columbus monuments have much time left anymore. @mayorbcyoung, 72 hours sounds like plenty of time for y’all to take them down. can’t guarantee they’ll still be standing after that,” @BmoreBloc tweeted yesterday at 9:47 a.m.

A renewed threat was issued today:

“good morning @mayorbcyoung got about 48 hours left [to] decide if the city will remove these racist monuments or if you’re leaving it up to The People to handle.”

Asked to respond to the threat, the mayor’s spokesman, Lester Davis, said this afternoon, “I believe the city is aware of it.”

He declined to say whether the city was providing extra security for the monuments or whether it planned to take any other actions.

The warning comes amid the continued protests in the U.S. and around the world following the killing last month of George Floyd, a Black man who died after a Minneapolis police officer knelt on his neck for nearly nine minutes.

In North Carolina on Friday, crowds pulled down two Confederate statues on the grounds of the state Capitol. In Washington, a statue of Confederate General Albert Pike was toppled and set ablaze.

Monuments to Christopher Columbus have been targeted, too. In Richmond, Va., a statue of the Italian navigator and colonizer  was spray-painted, set on fire and thrown into a lake earlier this month.

Leaders in a number of cities – including Richmond, Jacksonville and Indianapolis – have quickly moved to remove Confederate statues and memorials as the public furor over them has heightened.

Baltimore leaders have addressed the Confederate statue issue before.

Amid vows by local activists to take them down, then-mayor Catherine Pugh had four monuments removed overnight in 2017 – three honoring Confederate War figures and one a statue of Roger B. Taney, who authored of the 1857 Dred Scott decision, in which the Supreme Court held that the constitution was not meant to include U.S. citizenship for black people.

Over the weekend, the statue of George Washington in Baltimore’s Druid Hill Park was vandalized with red paint. Graffiti written on the base includes “Destroy racists” and “BLM Fuck12,” according to photos posted by @BmoreBloc.

In its online comments on the Columbus statues, the group notes that there are three of them in Baltimore.

The one at Druid Hill Park is within the fenced-off construction area around the Druid Lake reservoir.

Another city monument to the explorer, located in Heinz Park at Harford Road, Walther Avenue and Parkside Drive, was severely vandalized in 2017 but still stands. 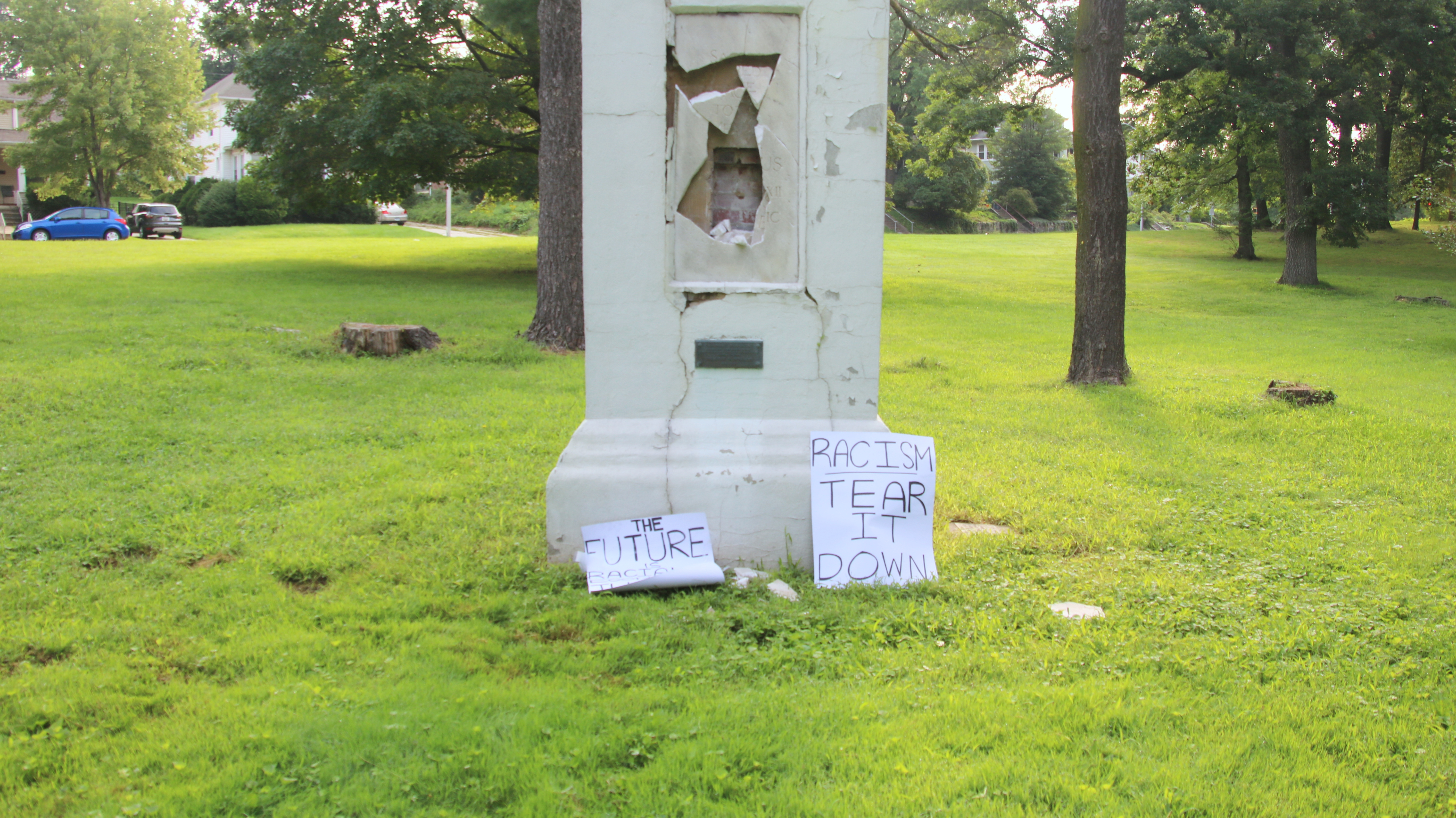 The monument to Christopher Columbus in Heinz Park after vandals defaced it in 2017. (Fern Shen)

A video at the time surfaced showing someone taking a sledgehamer to the base of the 44-foot-tall obelisk while a voice read a statement that said in part:

“Christopher Columbus symbolizes the initial invasion of European capitalism into the Western Hemisphere. Columbus initiated a centuries-old wave of terrorism, murder, genocide, rape, slavery, ecological degradation and capitalist exploitation of labor in the Americas. That Columbian wave of destruction continues on the backs of Indigenous, African-American and brown people.”