That’s according to Ben Smith’s analysis of an exit poll (of 400 registered Democrats who voted in the June 2 primary) conducted by the Democratic consulting group, Tidemore, where he is a partner.

His analysis includes some revealing tidbits:

• City Council President nominee Nick Mosby, whose wife is the well-known Baltimore State’s Attorney Marilyn Mosby, did very well with women. “His voters being comprised 66% of women puts him just behind Comptroller Joan Pratt (67%) and former Mayor Sheila Dixon (69%) for having the most woman-centric coalition of any citywide candidate.”

• The difference in racial breakdown for the two top mayoral candidates was striking. Dixon voters in the Tidemore poll were 93% Black and 7% White. Scott’s were 63% Black and 37% White.

• For the mayoral candidates trailing them, the racial breakdowns were mirror opposites: Thiru Vignarajah’s were 69% Black and 31% White, while Mary Miller’s were 33% Black and 67% White. 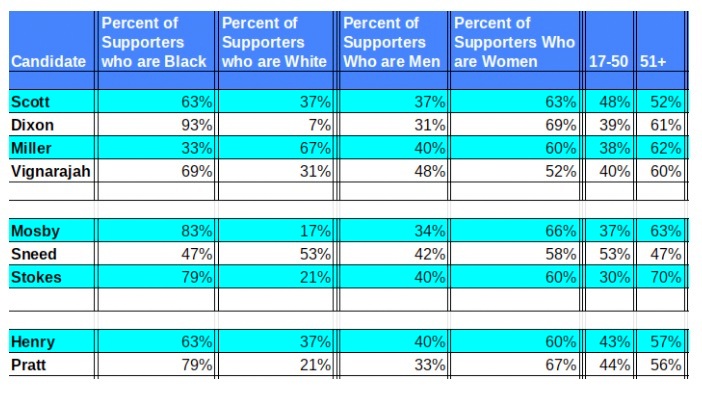 Turnout, timing and age were the highlights of the exit poll’s results, its author concludes.

The poll showed that increased turnout among voters under 50 tilted the scale toward Scott – and voters who waited until the end to decide on a candidate overwhelmingly chose him.

Scott also performed better than the other candidates across demographics.

“I’d argue strongly that the story of Scott’s victory is one of younger voters making their voices heard,” Smith wrote on Medium. “It is no exaggeration to say he won the election in the final two weeks of campaigning. It should also be noted that Dixon received the least support from late deciders of any of the top-tier candidates.”

“Dixon received the least support from late deciders of any of the top-tier candidates”  – Ben Smith.

More people voted in Baltimore’s first mostly mail-in election than in the 2016 primary, and many were young voters.

Smith suggests that may have been enough to tip the scales away from Dixon, who performed best with women and Black voters but suffered from single-digit support among young white voters.

In other words, Dixon’s supporters were with her all the way, but she wasn’t able to expand her coalition, according to Smith.
_____________
EDITOR’S NOTE: Smith was the executive director of the Maryland Democratic Party from December 2018 until January 2020. The Scott campaign paid Tidemore for consulting. Other candidates for whom Tidemore worked in this election cycle include Councilman Bill Henry, who unseated incumbent Comptroller Joan Pratt, and Council members Shannon Sneed, Ryan Dorsey and Kristerfer Burnett.