More than 100 trash collectors are set to return to work after a coronavirus outbreak halted recycling pickup in Baltimore for three weeks, leaving streets and alleys across the city filled with trash.

“We expect to return as close to normal as possible in the coming weeks,” Acting Public Works Director Matthew Garbark said at a news conference yesterday.

Acknowledging citizens’ frustration about “having trash pile up for weeks at a time,” Garbark said the department “is in full agreement” that the situation is “completely unacceptable,” but defended its response.

“I don’t think the Bureau of Solid Waste has ever experienced this level of disruption in its history,” he said.

“We did the things that we needed to do,” added Solid Waste Bureau Chief John Chalmers.

Chalmers said the 112 employees returning to work today will pick up on normal Wednesday routes and then “go backwards,” catching up on missed routes from previous weeks.

Garbark said “seasonal maintenance aides” have been assigned to help address the backlog.

The seasonal aides, paid $11 per hour, will work alongside the bureau’s $17-per-hour truck drivers and $14-per-hour laborers, he explained to The Brew.

The agency is looking for more of these temporary workers, he said. “Basically if you can pass the drug test, we will hire you.” 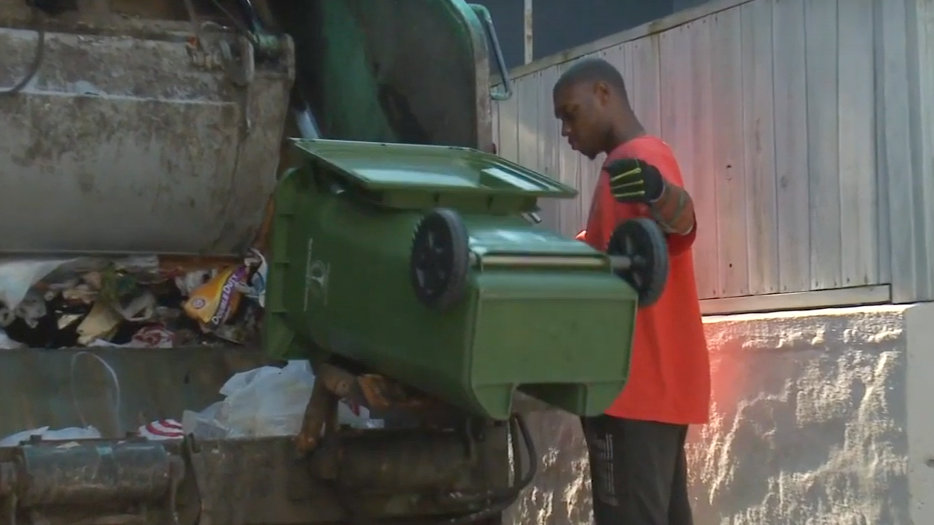 According to an employee at DPW’s Eastern District sanitation yard, where the Covid-19 outbreak occurred, fellow employees began testing positive for the virus “at the end of April, beginning of May.”

The employee, who asked not to be identified for fear of job reprisal, said when employees learned of the positive cases – including of a man reportedly experiencing severe respiratory symptoms – some asked to be excused from work and self-isolate.

“They called it insubordination,” the employee recalled. “Their answer was ‘no.’”

“They called it insubordination,” said a DPW employee, recalling management’s response to workers who wanted to self-isolate.

A second employee told The Brew that supervisors and workers were instructed not to write up “incident reports” about those who tested positive or were sent home because they were sick.

“For each employee who tested positive, there should be an incident report. But they didn’t want that. They wanted no paper trail,” said the employee, who said he had direct knowledge of DPW’s response to the outbreak.

Chalmers offered a different timeline, saying the outbreak took place about a month later. “Between May 29 and June 10, we noticed a spike in cases,” he said.

“The first week [in early June], they noticed cases every other day, every third day,” Garbark said, also addressing the timeline. “The next week after that, they started coming every day.”

“At that point we talked with the health department. We did talk to City Hall,” he said. “It was agreed that over the weekend every single employee of that yard would be tested.”

At the point when they shut down the Eastside facility, nine people, including several supervisors, had tested positive.

“We also found that 30 people had decided to self-isolate,” Garbark added.

Responding to the crisis, DPW revoked paid “permission leave” for a group of other employees.

But with some refusing to report to work, DPW issued a press release on June 12 that included a harsh warning: “Failure to report will result in job abandonment,” it said.

“Because of the severity of the situation, we did have to take a rather aggressive stand,” Garbark said yesterday when asked about the warning. “Thankfully, folks have come in,” and no one was fired.

A total of 15 Solid Waste Bureau employees have tested positive for the coronavirus, including three who were hospitalized and have since returned home, he said.

“They were afraid. . . We had to make them feel we were taking this situation very seriously”  – Solid Waste Chief John Chalmers.

Chalmers said the bureau performed contact tracing early on and has been sanitizing surfaces and providing workers with protective equipment and laundry services.

DPW officials described a number of challenges they said have slowed their efforts to catch up amid the staffing shortage, including a 22% increase in curbside trash, probably due to people being home as a result of the pandemic.

Garbark said people are mixing recycling with trash, increasing the amount of garbage left in Baltimore’s narrow alleys and requiring drivers to sometimes back out of alleys after retrieving trash on foot.

Delays have also been caused by workers, filling in from other agencies, being unfamiliar with the routes, Chalmers said. Installing GPS in garbage trucks has become “a top priority.”

With private haulers stepping in to make pick-ups and citizens disposing of their own trash, there have been long lines at two popular drop-off points – the Northwest Citizens Convenience Center on Sisson Street and the Northwest Transfer Station on Reisterstown Road.

At the Sisson Street site, for example, there have been 500 drop-offs per day compared to 350 daily drop-offs before the pandemic, according to Garbark.

– Mark Reutter contributed to this story. To reach us: editors@baltimorebrew.com