Between  2010 and 2017, as other parts of the country were recovering from the foreclosures of the Great Recession, homeownership in Baltimore was declining, especially among Black residents.

While the citywide rate fell from 51% to 47%, Black homeownership sank from 45% to 42%, according to a report by the Abell Foundation about a trend it calls troubling.

“We find that new incentives and more flexible loans alone would have an insufficient impact on homeownership rates in Baltimore, because they do not address the systemic racism and inequities that disadvantage Black households,” conclude the authors, Sally Scott of the University of Maryland Baltimore County and Seema Iyer of the Jacob France Institute at the University of Baltimore.

They also point a finger at government failings that result in low homeownership rates across a broad range of city neighborhoods.

The city has housing education and counseling services and an array of homebuying incentives to assist mortgage-ready homebuyers or those with resolvable credit and budget issues, the report notes.

But it concludes that “the current system remains less efficient, less coordinated, and more complex than it should be.” 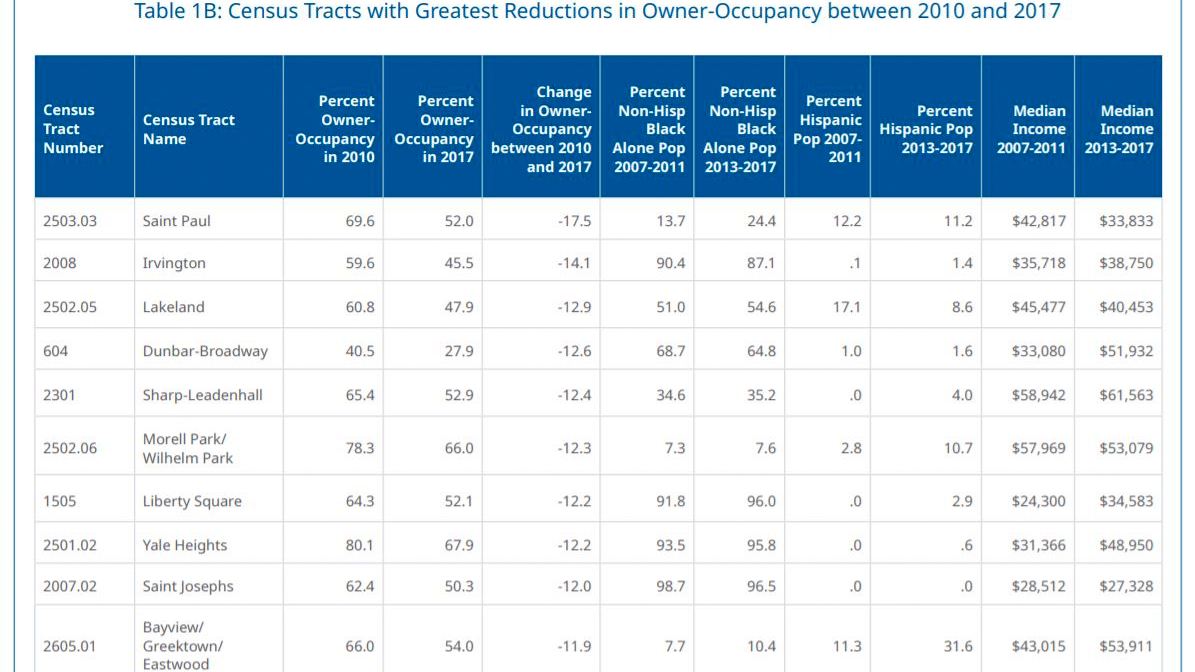 Census tracts with the greatest reduction in owner-occupancy between 2010 and 2017. (Source: abell.org)

The authors note that, while these areas are not wealthy, most are not deeply impoverished.

The authors describe the data as “deeply worrisome.”

They note that nine of the 12 majority Black census tracts had solid owner-occupancy rates of 60% or more in 2010.

“Each of these areas lost 11% to 14% of owner-occupants in just seven years,” the authors found. “For example, the Liberty Heights neighborhood in Greater Mondawmin, just west of Druid Hill Park, saw a 12.2% drop in owner-occupancy from 2010 to 2017.”

Reversing “underlying racial inequities” are at the heart of the report’s recommendations, which include:

•  Support effective housing education and counseling and make incentives programs for homebuyers easier to navigate. To do this, create a more holistic system around homeownership, including shared measures of success.

•  Support financial coaching and innovative forms of outreach to reach people who aren’t ready to buy yet.

The authors conclude that Baltimore and other cities need policies that address an inadequate supply of affordable homes as well as “constrained demand” caused by damaged credit and insufficient income.

NOTE: The Abell Foundation provides financial support to The Brew in an effort to strengthen community journalism.