Stacks of cardboard and yellow containers full of plastic bottles dotted the streets of Baltimore today after city officials announced that recycling has been suspended until November 1 at the earliest.

The stated reason: staffing shortages caused by the Covid-19 pandemic.

The recyclable items had been dragged out to the curb by residents hoping to offload them before Monday when the pickups are being halted.

Several of them said they understood the concern for workers’ health, but lamented the decision’s impact on the environment and on the condition of city streets should trash pile up.

For those who wish to recycle, Baltimore is providing 14 drop-off stations, one in each Council district.

But Quamaine Johnson predicted that he and others would often just end up putting those newspapers, soda bottles, boxes and other recyclable items right into the regular trash, which will be picked up as usual, once a week.

From there, it’s on to the city’s pollution-spewing BRESCO trash incinerator.

“I will try to recycle as much as possible, but my garbage cans are so full that I don’t want recycling piling up into the street,” Johnson said.

A 38-year-old Waverly resident, Johnson said he hasn’t received any garbage pickup at his house in three weeks.

The Waverly resident hasn’t received garbage pickup at his house in three weeks.

An outbreak of the coronavirus at the Bowleys Lane Sanitation Facility halted recycling pickup in early June.

Even after the Department of Public Works announced that collections would resume three weeks later, they have remained irregular – generating widespread complaints.

Now with the recycling once again discontinued, Johnson said, the un-separated trash being burned will damage the environment.

“I thought we were trying to not have recycling in our garbage, which is why we started recycling pickup to help reduce pollution,” he said. “So my reaction to this is just ‘wow.’”

At a news conference today, city officials said the pandemic presented Baltimore with a tough challenge: the need to pick up more trash with many fewer workers.

Recycling workers will be assigned to trash collection in order to chip away at a growing backlog of service requests, DPW Acting Director Matthew Garbark said.

“We believe this plan, while difficult, is what is needed for us to gain control of this crisis,” he told reporters.

Residents will be able to take their recyclables to the community collection centers Monday through Friday from 7 a.m. to 3 p.m. A dumpster or trash vehicle will be available at these sites. 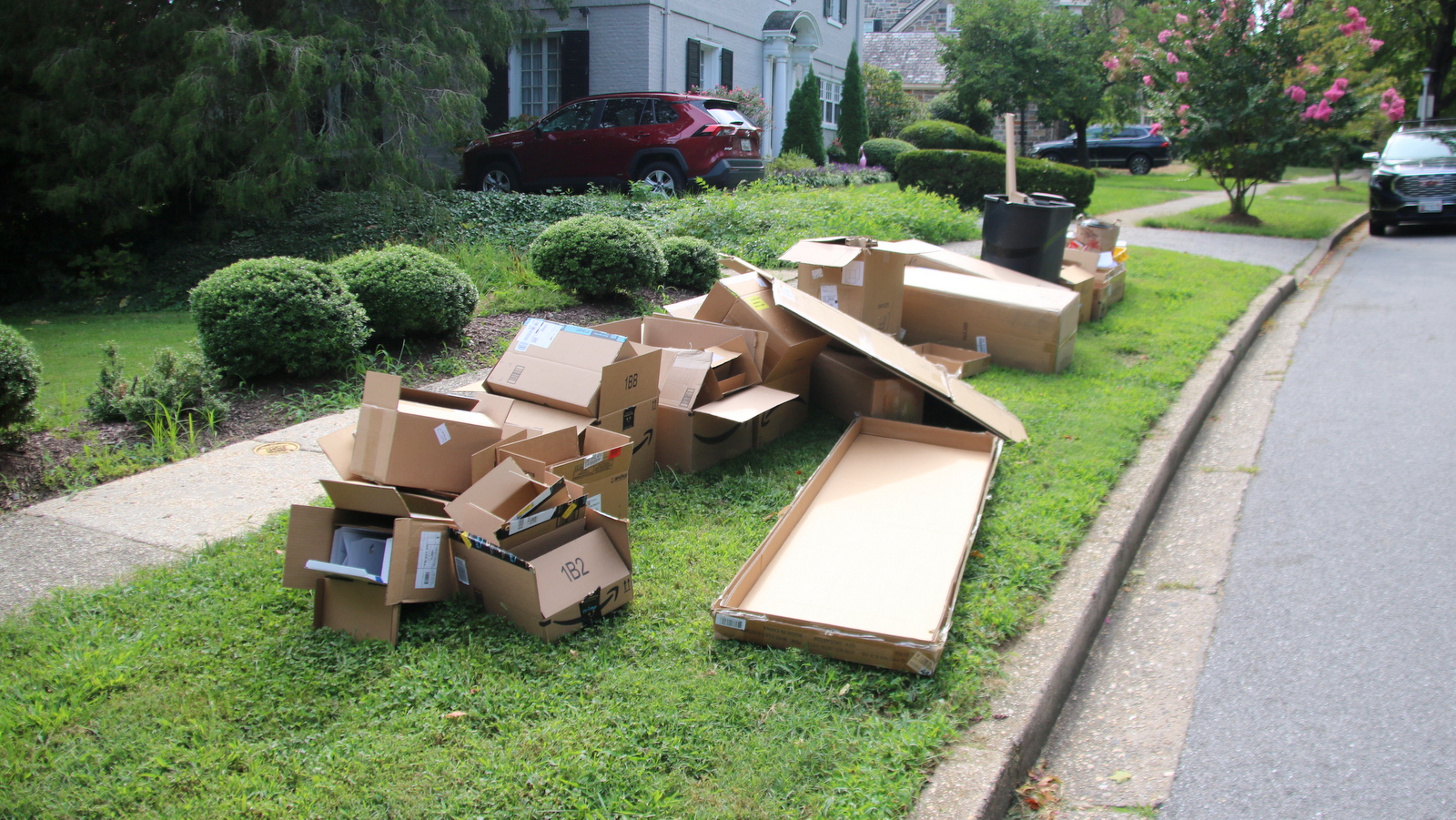 Cardboard and other recyclable materials were everywhere in Baltimore today ahead of the city’s suspension of recycling pickup on Monday. (Louis Krauss)

The decision comes during a nationwide surge in household trash and a shortage of sanitation workers.

Garbark said that on an ideal day he needs 210-230 workers, including supervisors, drivers and laborers. But he’s been getting 150-160 per day in recent months and has had trouble finding private contractors.

Residents have been complaining about uncollected waste and unfulfilled 311 requests more than usual on social media.

“We had increased tonnage, our workers were afraid and anxious, and the heat was oppressive,” he said. “Routes started getting longer, and we began seeing more and more employees go out on medical leave or injury due to heat-related illness.”

“Our crews were, quite simply, exhausted”  – Matt Garbark.

“Our crews were, quite simply, exhausted,” Garbark said. “We’ve reached a breaking point.”

Garbark said the goal is to resume recycling routes on November 1, but they will resume sooner if possible.

Some residents that The Brew interviewed sympathized with the city and its solid waste crews.

Darlene Taylor, who was picking up dry cleaning on Greenmount Avenue, said she understands the decision if it’s due to safety concerns amid the pandemic.

“If it’s too risky for them to have that additional day for recycling pickup, then, yeah, I’m right there with them,” Taylor, 64, said. “I wouldn’t have an issue with it. People have been mixing it in with their garbage for years.

Although she doesn’t need to do much recycling herself, Taylor said she’s still unhappy about the city’s switch from twice-a-week garbage pick-up to once-a-week.

“We accumulate a lot more trash than one pickup per week,” she said. “Two days a week is what I’d known for 100 years.”

These locations will accept trash and recycling Monday through Saturday, 9 a.m. to 7 p.m.

Residents can also dispose of trash and recycling at these locations: