Walking in Ednor Gardens-Lakeside, Bob Wallace introduced himself to a voter enjoying a beautiful autumn afternoon on his porch.

Wallace, the independent mayoral candidate, asked the man if he had any questions about the campaign.

The man said he had seen him on TV and was already a supporter. “I just need to know you won’t turn on me,” he said.

Fed up with “the Foolishness”

This afternoon quite a few voters said they recognized him from his ads – and this was before a primetime spot on Monday Night Football when the Ravens played the Kansas City Chiefs.

(That ad featured former Ravens linebacker Ray Lewis, who is in business with Wallace’s son Rob.)

“We’ve covered a lot of ground not just literally, but intellectually and spiritually,” Wallace told The Brew. “There are so many Democrats who are so fed up with the foolishness in this city.”

• Yes, there is a Republican, Shannon Wright, on the November ballot.

An engineer and the founder of Bithgroup Technologies, Wallace is running a pro-business, pro-jobs, moderate-to-conservative campaign.

He’s pushing for more vocational training for students and an end to the “cycle of mismanagement and corrupt leadership in City Hall.”

“There’s a stealth energy that is moving in the neighborhoods,” he said. “On the street level, there is something happening.”

The vast majority of that he has loaned to himself. Last month, he reported having $367,115 on hand, including $293,000 in loans to his own campaign. His wife, who lists her address in Clarksville in Howard County, loaned another $50,000.

Scott had $159,652 on hand after spending $357,965, mostly before the primary. (The first pre-general election campaign report covered mid-May through mid-August – and Scott has been on the fundraising circuit since then.) 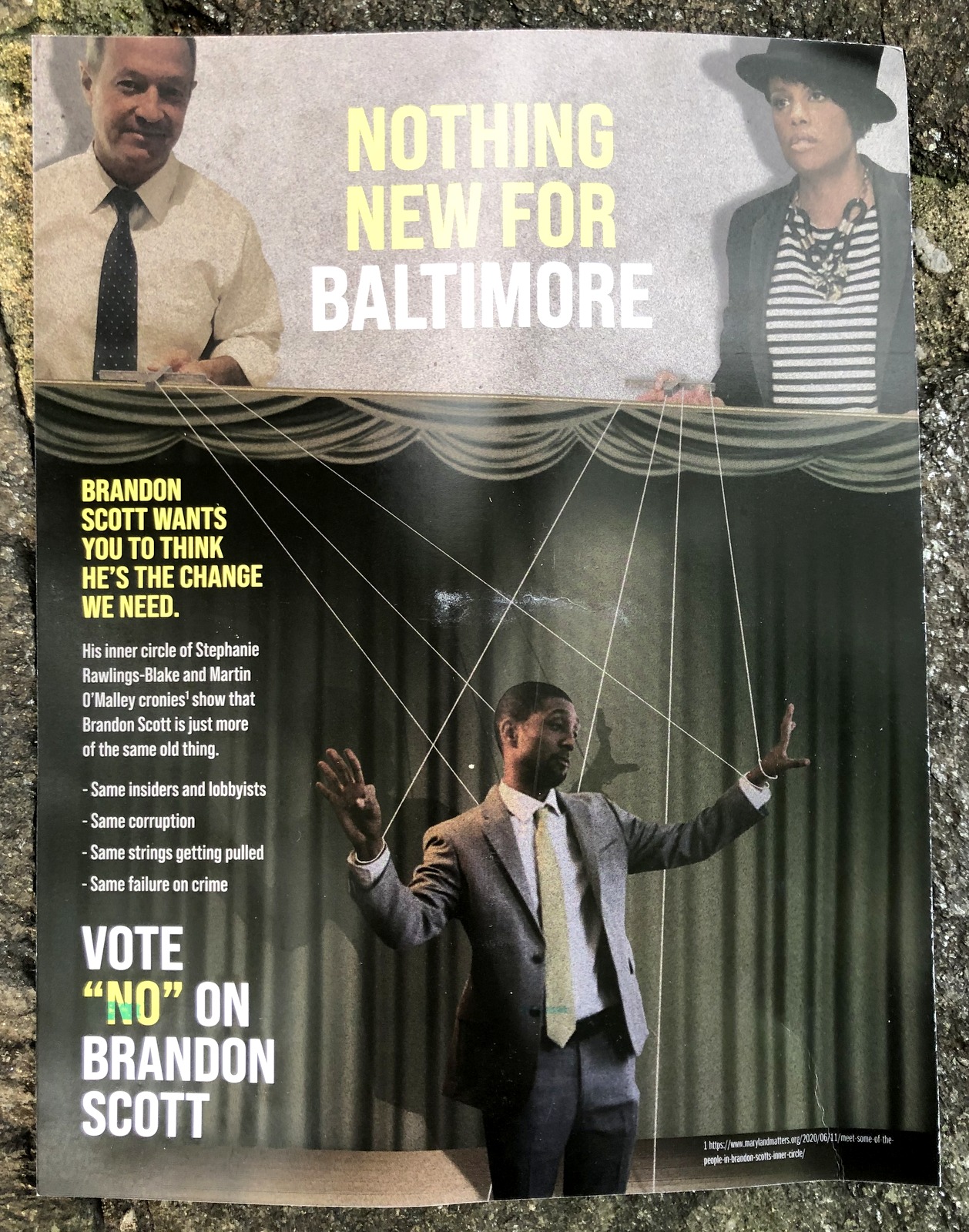 The 64-year-old Wallace casts Scott, who recently turned 36, as too young for the job and more of the same.

He sent out a mailer that portrays Scott as a puppet of former mayors Stephanie Rawlings-Blake and Martin O’Malley.

(Scott’s supposed puppeteers, as well as former mayors Kurt Schmoke and Sheila Dixon, opposed many of his plans at a recent forum hosted by the Greater Baltimore Committee, on whose board Wallace sits.)

Scott won the Democratic primary with 30% of the vote, and Democratic voters outnumber Republican voters by a 26-1 margin.

Wallace’s goal is to appeal to Democratic voters who preferred Dixon, Mary Miller or Thiru Vignarajah in the primary.

The candidate’s son, Rob Wallace, claims his father is polling around 25% of the general election vote. Their strategy is to win half of the Democrats who didn’t vote for Scott.

T.J. Smith, a former spokesman for the Baltimore Police Department who ran sixth in the Democratic primary, is an advisor. The campaign hopes that Smith, who is known more widely in the city, can gain the businessman some votes.

“We should shake up the trees [and] disrupt the status quo,” Smith said. “We have to really be aggressive. There’s so much opportunity here.”

Smith said he had been enjoying some post-primary downtime when the Wallace opportunity came along. Coy about his own political future, Smith preferred to talk about teaching his son to fish.

Despite the Covid pandemic, Wallace wants to connect with as many voters as possible during his high-energy walks.

(The candidate does wear a mask, but it was pushed down below his nose and mouth more often than not when we accompanied him.)

Before the canvassing began, the Wallace team played music and waved to cars at the intersection of Hillen Road and 33rd Street.

Two vans featured big Wallace signs, while his teenage grandson was dancing, as he does most days, in the median.

Recognizing it’s a steep uphill climb to gain support in an overwhelmingly Democratic city, the former Republican reflected on his reason for running:

“Sometimes in life you’re called to do something that doesn’t make sense.”