The developer under contract to buy the Mount Vernon Place United Methodist Church and adjoining Asbury House wants to pay roughly $1 million, then flip the Asbury House for at least $900,000.

Multiple sources tell The Brew that Joseph Novoseller, of Lakewood, N.J., was trying to attract buyers for the Asbury House even before the Covid-19 pandemic hit in March and slowed down his efforts.

News of the pending sale, first reported in The Brew, has set off alarm bells for preservationists and property owners.

Opponents of the subdivision plan say the church has a better chance of being successfully re-purposed for event space or other uses if it remains under the same ownership as the adjoining Asbury House because the house, with its rear parking lot and sizable flat roof, could be used to accommodate elevators, fire stairs and mechanical equipment that would clutter up the church itself.

The preservationists say the church is too important to fall into the hands of an out-of-town developer with vague plans, an unclear budget, and anything less than a first-rate restoration team.

And they argue that the city has too much invested in Mount Vernon Place, with the restored Washington Monument surrounded by institutions such as the Peabody Institute and the Walters Art Museum, to have one of its key corners owned by someone whose first goal is to slice it off from the building that has supported it for more than half a century.

Several community leaders told The Brew they are appalled that city planners would even entertain the subdivision proposal and deeply concerned that no one has stepped up with a loftier vision.

Several community leaders interviewed by The Brew say they are appalled that the city would even entertain the subdivision proposal.

“What we’re proposing very simply is to subdivide the church from the brownstone property,” Hecker said on the call.

“That’s the extent of the application that’s on file with the Planning Department, and on which the Planning Commission will ultimately hold a hearing,” she said.

“The idea is,” Hecker continued, “that the house building will be sold separately from the church to a resident of some variety – we don’t have a buyer yet – and then the church will be restored and redeveloped for future use.”

Novoseller, also on the call, declined to say how much he is paying for the properties, and a representative for the church said there is a confidentiality agreement that prohibits the buyer and seller from disclosing the agreed-upon price.

Attempts to reach Novoseller by email and phone were unsuccessful. 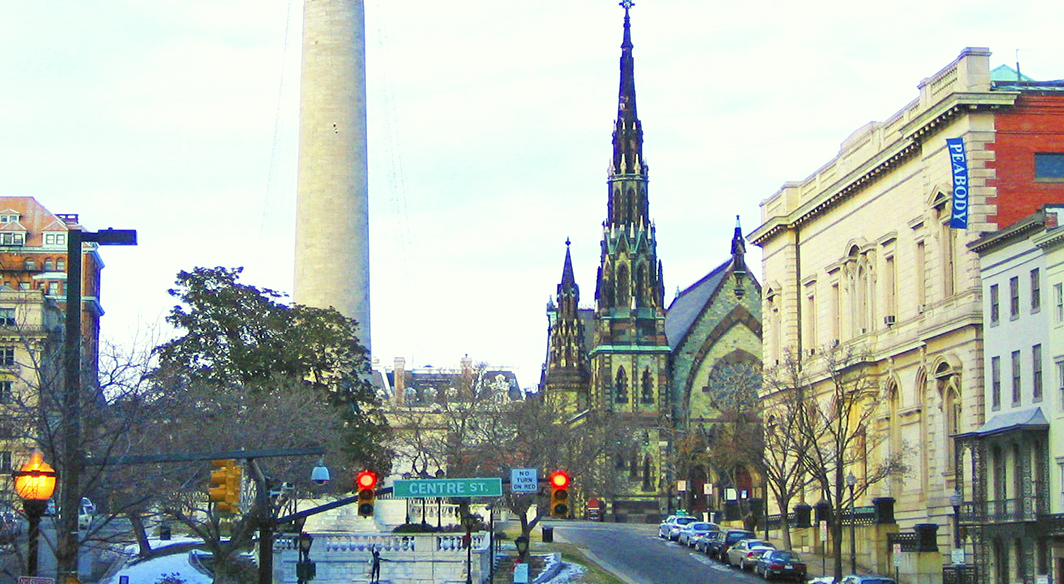 The distinctive green-toned church is seen between the white marble shaft of the Washington Monument and the Renaissance Revival facade of Peabody Institute on Mount Vernon Place. (Wikimedia Commons)

Numerous residents say the best steward of the church and Asbury House would be the Mount Vernon Place Conservancy, the non-profit organization that raised funds and completed a $5.5 million restoration of the Washington Monument five years ago.

Henry H. Hopkins, chairman of the conservancy’s board, was on the call with Novoseller and said he and executive director Lance Humphries are following the city’s actions closely,

“This is a very big issue for Baltimore, the conservancy and the neighborhood,” Hopkins said in an email to The Brew. “You can be assured the conservancy is following this matter with the utmost interest and concern. The church is one of Baltimore’s most iconic structures and its preservation is paramount.”

Humphries said the conservancy does not support the subdivision plan as proposed.

“We would like to see a realistic redevelopment and financing plan before we would be in support of a subdivision,” he said in a separate email.

Hearing not yet Announced

The Baltimore City Charter requires than any land subdivision in the city must be approved by the Planning Commission.

In this case, the two buildings have been deeded as one parcel since 1971, and the parcel must be subdivided in order for Novoseller to flip Asbury House. The developer argues that the subdivision is a relatively simple process and ought to be approved because the buildings weren’t always one parcel.

But in this case, after receiving numerous letters of objection to Novoseller’s plan, Planning Director Chris Ryer decided that the developer’s request qualifies as a major subdivision and that the planning commission must hold a public hearing on the application, giving residents a chance to testify.

The planning commission has been sued at least twice recently by community residents unhappy with a pro-developer decision, and the panel has been making a noticeable effort to document “findings of fact” that back up its decisions.

The commission has not yet set a public hearing date for the subdivision request.

Novoseller said he’d like to have the community’s support.

“We aren’t looking to hurt anybody or upset anybody. We just want to do what’s good for the community and at the same time hopefully make a little money.”