Armed with signs, chants and a megaphone – in order to be heard throughout their socially-distanced rally – about 75 Baltimore teachers and parents gathered to send a message:

They believe Baltimore schools lack the resources to open in a way that protects students and staff from Covid-19.

Rallying in front of Baltimore City Public Schools headquarters yesterday, speakers said they want students to return, but only when buildings are properly ventilated and stocked with soap, paper towels and other supplies necessary to slow the spread.

“What do we need before we start class? Masks, testing and plexiglass!” the crowd chanted, at one point.

Two weeks from tomorrow, City Schools CEO Sonja Santelises is expected to say whether school will remain all-virtual or if the district will move to a hybrid model.

“We don’t think the administration can do it with fidelity”  – English teacher Patrice Pilgrim.

Members of the Baltimore Teachers Union (BTU), Parent and Community Advisory Board (PCAB) and other groups say Santelises has not been transparent enough about the decision-making process, and they’re pushing for an all-virtual first semester.

“Teachers are not saying that we don’t want to go back to school,” said Patrice Pilgrim, an English teacher at Independence High School and a press coordinator for BTU.

“We don’t want to go back unless it’s safe,” she said. “Based on what we’ve seen thus far . . . we don’t think the administration can do it with fidelity.”

In the best of times, said Pilgrim said, city schools don’t have adequate sanitation. Many bathrooms lack soap or toilet paper, many buildings lack heat or air conditioning, and classes are famously overcrowded.

Now, she said, the coronavirus pandemic has made the city’s poorly-equipped and maintained schools even more of a threat to student and teacher health.

The U.S. Centers for Disease Control and Prevention say many buildings will need to improve their ventilation systems to get rid of the airborne virus.

Angie Winder, a parent at Yorkwood Elementary School and a member of PCAB, echoed Pilgrim. She commended Santelises for hosting town halls and taking surveys.  But said she didn’t trust students to keep masks on all day or the schools to have enough masks and other equipment on hand to ensure a safe environment.

“I don’t think they’re prepared,” Winder said. “On a regular day there’s hardly any soap” in many Baltimore school buildings. 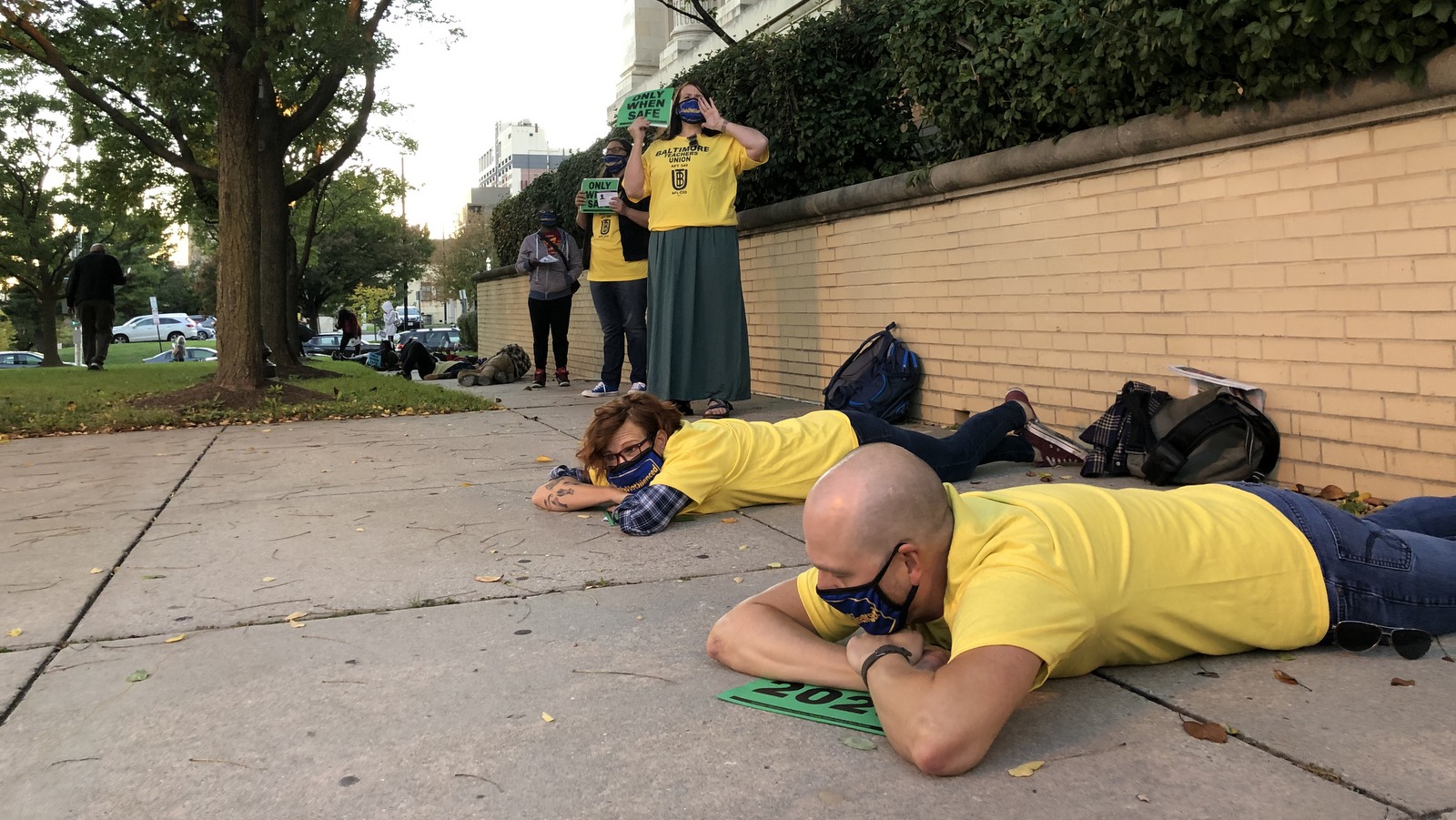 A speaker said: Sit or lie down if you know someone at extra risk for Covid-19 – with asthma, using public transportation, being over 65 years-old, etc. Almost all did. (Ian Round)

BCPS: No decision yet

In a statement, City Schools spokeswoman Gwendolyn Chambers said no decision had yet been made about re-opening. She said they are seeing success with limited in-person gatherings for English learners, special ed students and others.

“City Schools respects the right of members of our community to be heard,” she wrote in an email. “We will update our City Schools community about any next steps on October 16.”

Dray said it would be better for everyone to have certainty through the end of the semester.