Behind Marti Pitrelli’s house is a gravel lot with a massive American elm tree.

It’s not a park, but lots of local people use it. Yesterday afternoon, a few cars were parked, and three young boys ran around, throwing a football.

“It’s everyone’s backyard,” Pitrelli said, except on Sundays when Bethel A.M.E. Church members flood onto the lot and on nearby streets, making it tough to find parking.

Awarded the lot, behind the 1300 block of Druid Hill Avenue, for a nominal $15, the church is pushing ahead with plans to turn the informal public area into a private parking lot.

The controversy is the latest chapter of a bitter, years-long conflict between some residents and the historic Black church, whose members mostly drive to services once a week from wealthier city and county locations.

The gathering, which attracted about 30 people, did not go well.

In an effort to work out a deal, Councilman Eric Costello arranged for residents and church leaders to meet at the lot yesterday.

The gathering, which attracted about 30 people, did not go well. Residents and church members frequently interrupted each other and leveled attacks that became increasingly personal.

“We pay taxes,” Pitrelli said toward the end of the meeting. “You do not.”

Bethel’s senior pastor, Rev. Patrick D. Clayborn, said a prayer, then Pitrelli and a neighbor escalated an argument into a full-throated shouting match. 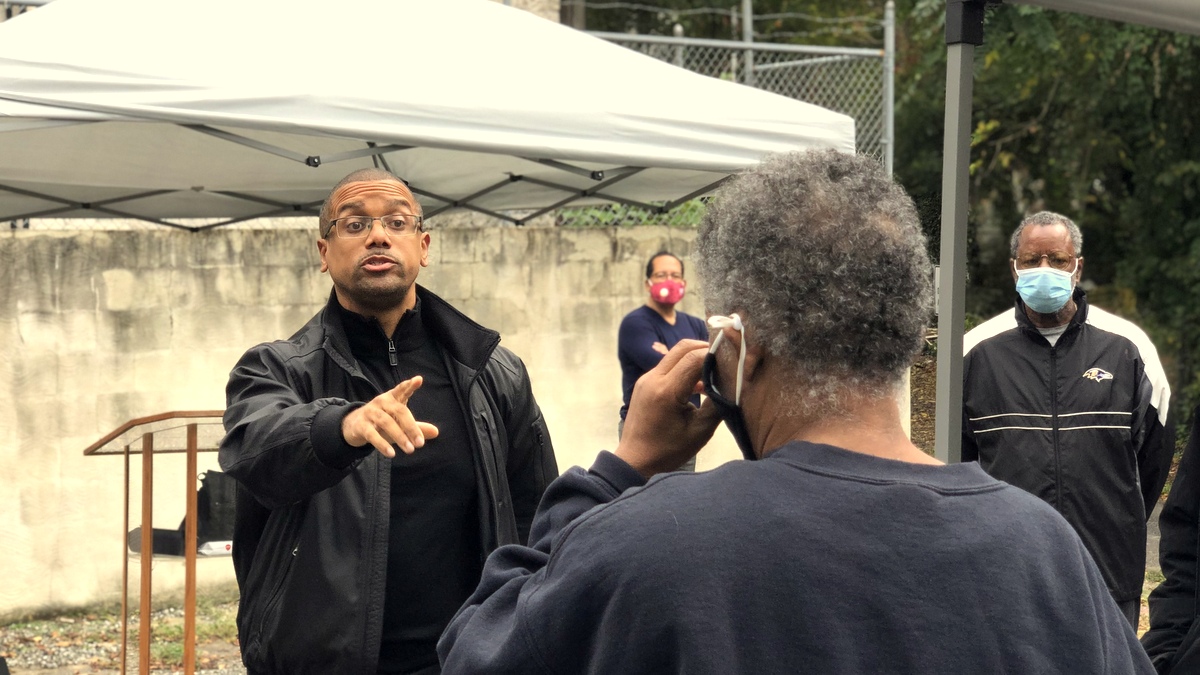 Rev. Patrick Clayborn speaks before the meeting devolved into a shouting match. (Ian Round)

Long considered a political powerhouse among Black churches, Bethel wants to pave the lot, build a wrought-iron fence around it, and, potentially, cut down the American elm.

The church has Costello’s support, who is advancing legislation to give it permission to build.

Church Steward Brett McAlily yesterday said that one of the church’s goals is to keep drugs and crime away from the property, protecting it from what he called “folks from outside the community.”

Shavonn Jordan, who lives nearby and is a member of the church, disagreed. “I think it’s unfair,” she said. “They should share it.”

Joseph Ross, who has lived in the Marble Hill neighborhood for about a year, said fencing in the lot will inconvenience a lot of residents.

“Where we are gonna park?” he asked, “Taking away the parking is crazy.”

Pitrelli and several others said a fence would prevent garbage trucks from picking up their trash. They recommended that the church keep the lot open, pave it with permeable material and take steps to protect the trees.

Church leaders promised to consult an arborist, but they wouldn’t commit to letting the trees stand.

“I in good faith can’t promise you what we can’t do. I guarantee I’ll listen”  – Rev. Patrick Clayborn.

“I in good faith can’t promise you what we can’t do,” Rev. Clayborn said. “I guarantee I’ll listen.”

Costello urged Bethel to keep at least the big elm tree. “That was a commitment that the church made,” he said. “It’s important for the church to be a good member of the community.”

“They’re not even considering the tree,” Pitrelli shot back.

In the end, terms of a possible sharing agreement were reached, but with numerous restrictions: including no vehicle maintenance, no car washing, no trucks, no commercial vehicles, no dumpsters, no contractors and no entrance between the residents’ alley and the lots.

Separating them would be a 200-foot-long fence, as part of a still-to-be-finalized memorandum of understanding. 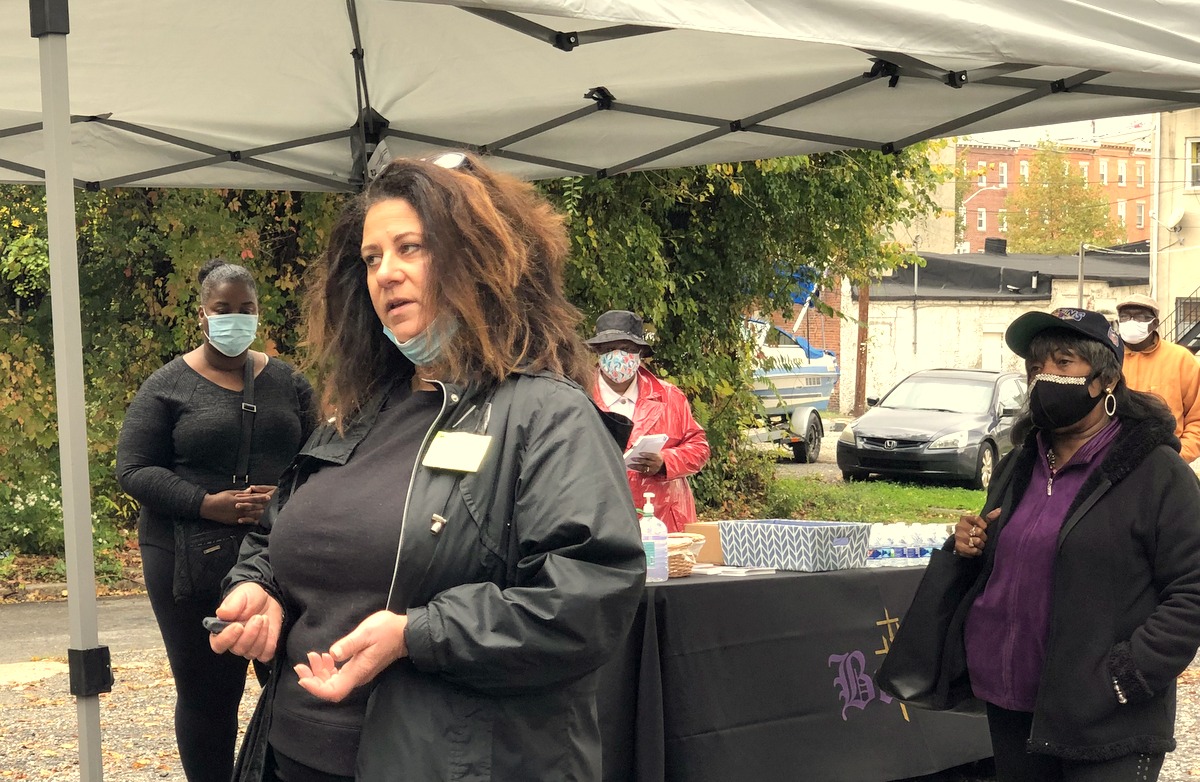 A longtime homeowner on the block, Marti Pitrelli denounced the church’s unwillingness to compromise at the open-air meeting. (Ian Round)

Given the circumstances under which the church got the property, some residents said Bethel doesn’t deserve the land at all.

The sale was highly unusual. Originally, the city purchased 15 rowhouses on Etting Street and West Lafayette Avenue, located in the same block as the church.

After the rowhouses were demolished and the lots cleared, Rev. Clayborn approached the city to buy the land.

The minimum price for a vacant lot in Baltimore is $1,000, but the Board of Estimates awarded the properties to the church for $1 per lot, or a total of $15.

Comptroller Joan M. Pratt, a prominent church member who sits on the Board of Estimates, did not recuse herself from the vote to sell the land to her church.

“We did not get this lot illegally,” Janette Smith, director of church growth, insisted yesterday. Much of the criticism against their plan, she said, was “inaccurate, inappropriate and misinformed.”

“Everybody’s not going to get what they want,” she continued. “There’s gonna be concessions from both sides.”

“There’s no reasoning with the church,” Pitrelli countered later. “It’s their way or the highway.”

Conceding that not much compromise came out of the meeting, Costello said an MOU (memorandum of understanding) would be signed by the church, the city and neighborhood associations over the future of the parking lot. 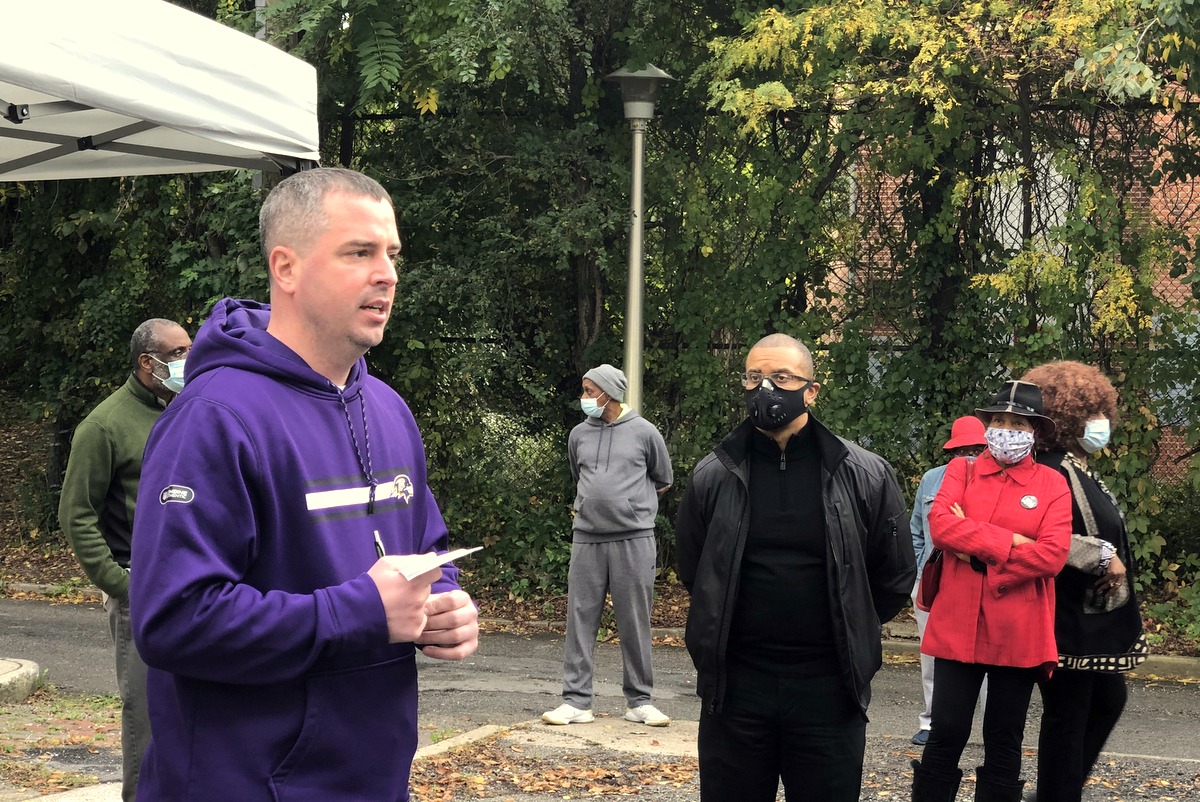 With Rev. Clayborn listening, Costello said he wants to strike a deal to get the parking lot built. (Ian Round)