Councilwoman Mary Pat Clarke says the public reaction to the Baltimore Police Department’s so-called “spy plane” is consistent across the many neighborhoods in her district:

“People are very negative about it, especially about the constant noise from it, and they’re desperate in their appeals for it to stop,” she said.

But with the six-month pilot run of the Aerial Investigation Research Program about to end, Clarke is worried that the outgoing Young administration might move to extend it.

That’s why she introduced a resolution at last night’s City Council meeting calling on the Board of Estimates to hold a public hearing on the controversial program prior to any decision on its extension beyond October 31.

“My understanding is, this was meant to be a turning point where we decide whether to go forward or not, but I have heard no sign of any agenda item or any hearing,” Clarke said.

“This was meant to be a turning point. . . but I have heard no sign of any agenda item or any hearing,” says Clarke.

The 14th District councilwoman said the BOE, which is controlled by lame-duck Mayor Bernard C. “Jack” Young, could act without public input to prolong the program, in which camera-mounted planes circle the city recording everything within their range below.

“I have people who want very much to testify,” said Clarke, adding that she is concerned about the program’s infringement on privacy as well as the droning noise produced by the circling Cessnas.

Clarke’s resolution calls on Police Commissioner Michael Harrison to give the Council “specific data and criteria in determining the effectiveness of the program.”

Begun last April and so far privately funded by a wealthy Texas couple, John and Laura Arnold, the aerial surveillance was promoted as a crime-solving aid for a violence-plagued city.

Early results have not been impressive. In July, BPD officials said the plane helped close two cases. In September, a preliminary Rand Corp. study found the planes helped detectives make an arrest at a rate about 5 percentage points higher than normal.

Asked for a comment on Clarke’s resolution, a press aide to Council President Brandon Scott pointed to his past statements criticizing the surveillance program as an ineffective approach to reducing crime.

“The Council President’s position on the spy plane is well-known and has not changed,” Stefanie Mavronis said. “He looks forward to the upcoming hearing in the Public Safety Committee.” 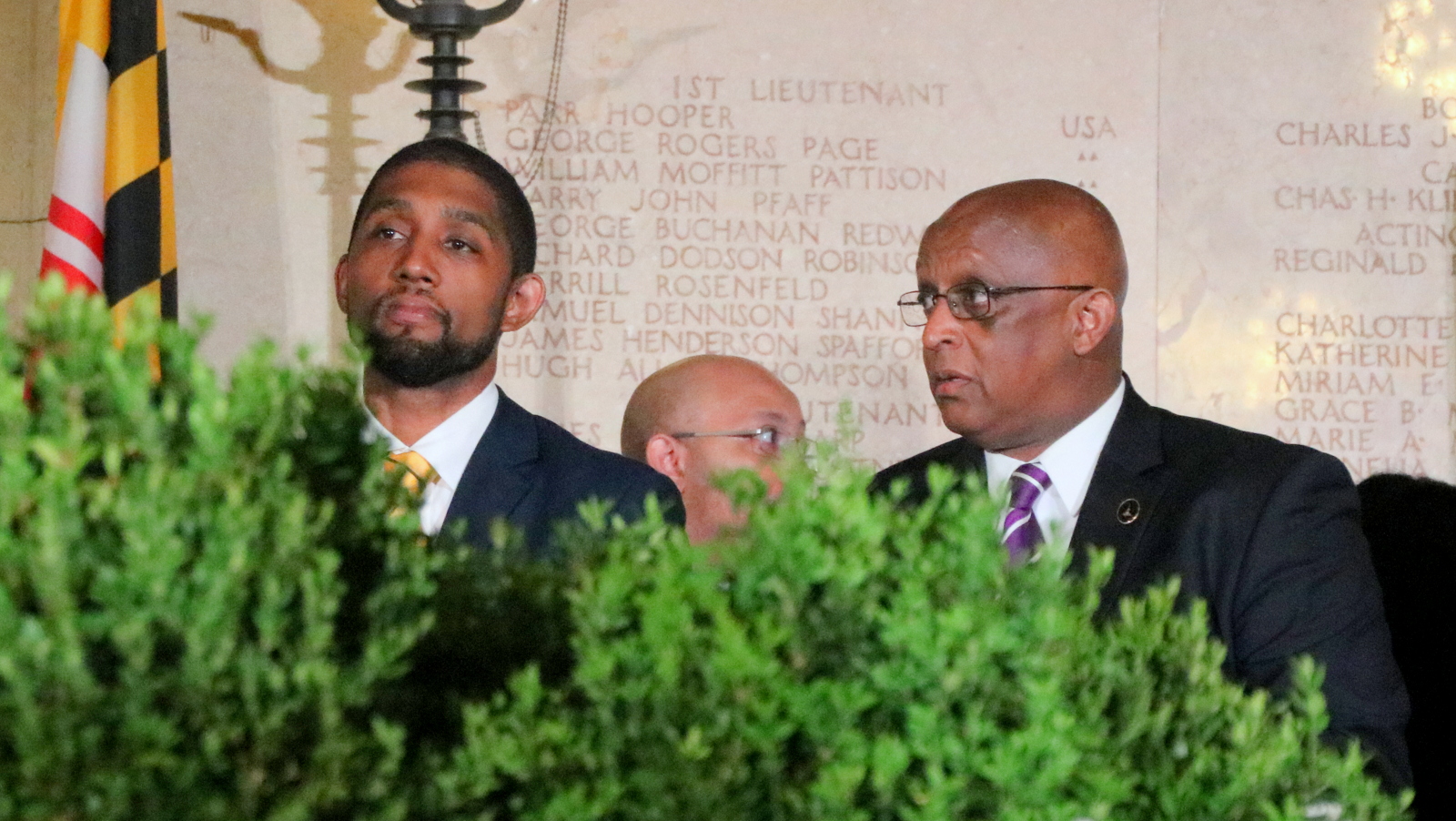 Brandon Scott and Jack Young when Young was sworn in as mayor last year after  Catherine Pugh resigned in the wake of the “Healthy Holly” scandal. (Fern Shen)

Asked whether Scott would schedule a public hearing on the spy plane before the Board of Estimates (as requested by Clarke in her resolution), Mavronis had no comment.

Young controls three of the five votes on the board, while Scott chairs the panel’s weekly meetings.

Some of Scott’s supporters have chided him for not using his clout, as the presumptive next mayor, to push Young to hold back on major decisions in his last months in office.

Scott has disappointed some supporters by not pushing Young to hold back on major decisions in his last months in office.

After defeating Young and other candidates in the Democratic Party primary last June, Scott is in line to win the November 3 general election and be sworn in as Baltimore’s next mayor in December.

But Scott has repeatedly deferred to Young, a pattern that Clarke raised in an interview yesterday with The Brew.

She cited the BRESCO trash incinerator, whose contract Young appears poised to extend for 10 years. Scott has disappointed incinerator foes by refusing to ask Young to leave the decision to him, arguing that “there’s only one mayor at a time.”

And backtracking on his earlier opposition to the incinerator, Scott says the contract should be extended, a stance that Clarke said has left her “quite surprised.”

Clarke advised Scott to do what Democrats in Washington have done with the current vacancy on the U.S. Supreme Court – tell the current administration to hold off.

“I keep making the analogy to the Supreme Court nomination,” she said. “It’s not right for a decision this major to be made in the final days of one administration when the next administration will have to deal with the consequences.”