Since September, Baltimore has signed $16.3 million in contracts with private vendors for masks and gloves, home-delivered meals, fruits and vegetables, and hotel rooms for homeless people, the Department of Finance disclosed today.

Over the same period, the city approved $320,000 in new desks and chairs for its Emergency Operations Center and purchased “routing software” for garbage trucks costing over $790,000.

All of the supplies and services were acquired without competitive bidding, as normally required for contracts above $50,000, under the emergency Covid declarations by Gov. Larry Hogan and outgoing Mayor Bernard C. “Jack” Young.

The board swiftly approved the spending items without discussion or comment.

The Finance Department said the items were requested by city agencies as “necessary to respond to or prepare for” the Covid-19 pandemic.

The largest expenditure went to Meals on Wheels of Central Maryland, which was awarded $3.2 million for its distribution of meals to needy families.

The leasing of an undisclosed amount of space at 1100 Wicomico Street, a trendy ex-industrial building in Pigtown, cost $753,510, according to the report.

Another $1.3 million was awarded to HOA Health LLC, a group incorporated by the executive director of the Coppin Heights Community Development Corporation. The company helps provide short-term crisis stabilization for people under the influence of drugs or alcohol.

Housing homeless people in hotel rooms to limit the spread of the virus was far less costly than suggested by the Young administration.

Last month, the administration said it would order those living in hotel rooms back to city shelters because there was no more federal CARES Act money. Following media reports and a public demonstration, the plan was abandoned, and hotel accommodations are expected to continue through March.

The Finance Department reported that the city was charged $841,000 by Fairfield Inn and Shree Sai Siddhi Baltimore, owner of the Russell Street Holiday Inn Express, to house the homeless citizens. 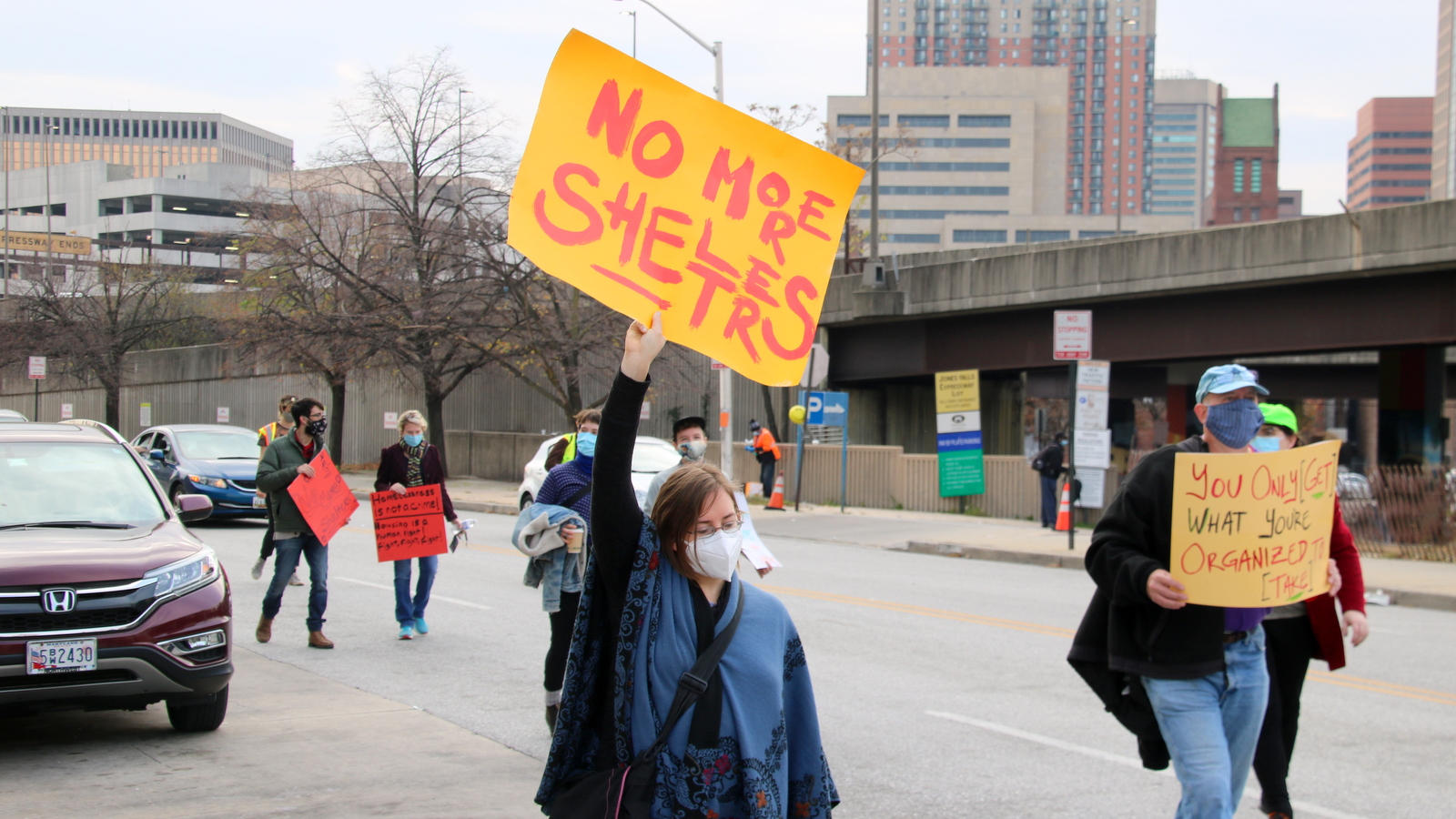 Demonstrators march up Fallsway last month to protest the city’s plan to force homeless people back into shelters. The bill for hotel rooms, disclosed today, was less than expected. (Louis Krauss)

That sum was three times less than the $2.6 million spent on ordering masks and gloves for city agencies since September.

DC Dental, a nationwide supplier of PPE, was awarded $525,000 for medical grade masks, while US21 Inc. received $579,600 for firefighter gloves and surgical masks.

The total number of masks and gloves supplied by 12 vendors was not disclosed in the Finance Department report.

The Department of Public Works paid Goode Companies and Spindler Refuse $1.2 million to pick up garbage in parts of northeast and west Baltimore.

The city has blamed a shortage of workers and increased demand from the pandemic for the lapse in collection. Previously, acting DPW Director Matt Garbark said recycling would resume on November 1. Then he promised resumption by mid-December.

Criticizing the Young administration for its inaction, Scott yesterday vowed to “provide PPE, cleaning protocols, training and adequate equipment to safely distance to keep our workforce healthy and safe.”

“These things don’t happen overnight,” said the new mayor. The city’s stockpile of $2.6 million in masks and gloves should help.