But 2103 Druid Hill Avenue is listed as the address of 10 people who donated $3,200 to “Friends of Marilyn Mosby,” her campaign committee.

None of the 10 is reported as the building’s owner in property tax records, while all of them are identified in Mosby’s report to the State Elections Board as employees of the “Baltimore City State’s Attorney Office.”

In fact, only one, Janice Bledsoe, works for the SAO. The others range from an equity manager to an inspirational author, a sewer contractor, an events planner, an architect, a hospital association lobbyist and three attorneys.

The building’s owner, on the other hand, has never contributed to any political candidate, according to state elections records.

A similar scrambling of names, addresses and employers throughout Mosby’s report makes it impossible to determine with certainty who exactly contributed to Baltimore’s top law enforcement officer last year:

• Is the real donor the person listed as the contributor?

• Or is the donor the person tied to the address listed, which in dozens of cases does not match the contributor named?

• Or is the employer of record a hint of the actual giver? 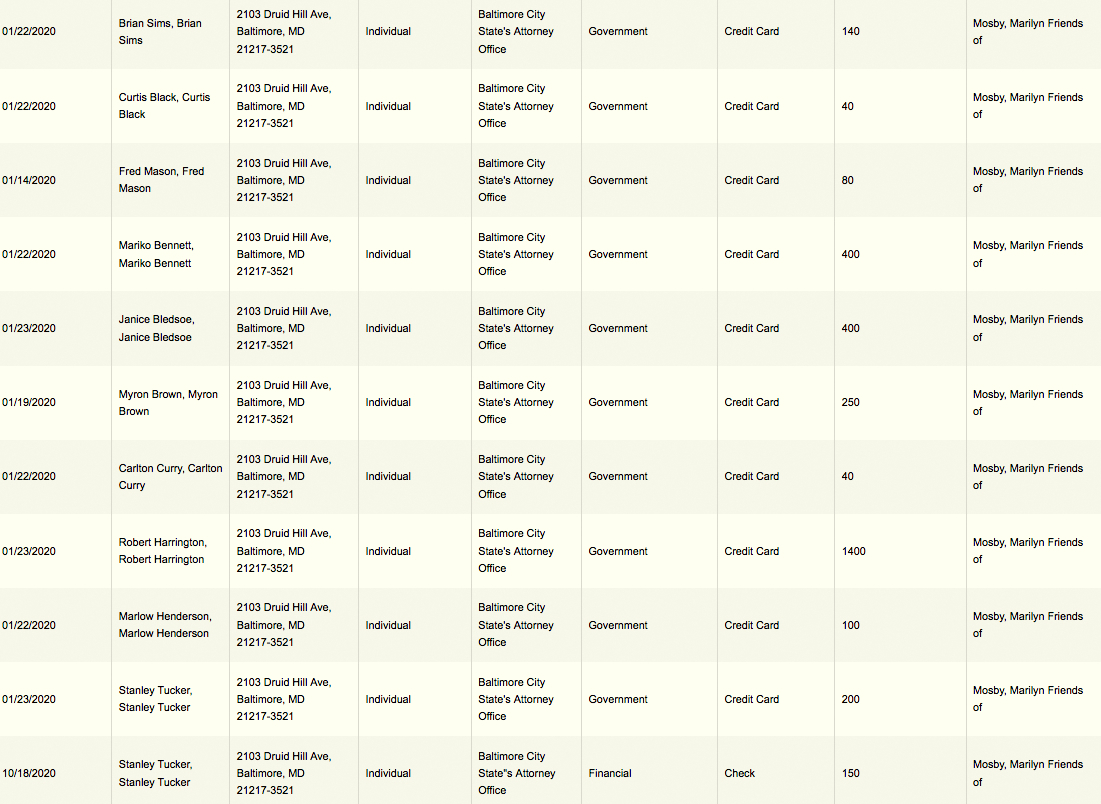 The 10 donors having the same West Baltimore building address that is not owned by any of them. (State Board of Elections database)

The Brew has tried unsuccessfully to reach Mosby and her treasurer, Shariff J. Small, for explanations about the discrepancies found in the report.

While the amount of funds in question is not large (about $20,000), the degree of confusion and the apparent inaccuracies are striking.

While the amount of funds in question is not large (about $20,000), the degree of confusion and the apparent inaccuracies are striking.

As chair of the committee, Mosby vouched under the penalty of perjury that the information in the report is “complete and accurate.”

Most of the contributions were raised during a 40th birthday fundraiser held in January 2020 for Mosby at the Sangria Patio Bar. Suggested contributions ranged from guest ($40) to host ($1,400). 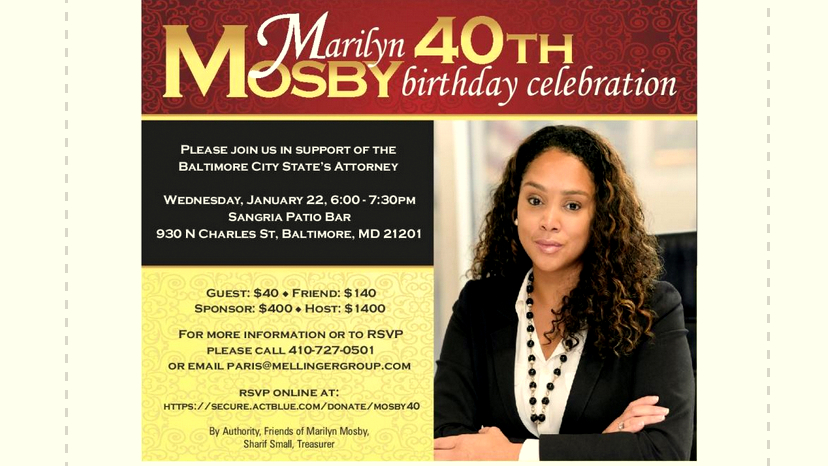 The fundraiser where scores of names and addresses were scrambled in a report that Mosby pledged to contain complete and accurate information. (Mosby flyer; January 20, 2021 campaign report)

Other oddities crop up in the report.

For example, Kevin Pfeffer, a $3,000 Mosby donor, is listed as residing at the Hanover, Md., address of Byron Deese, a Tuskegee University graduate who has given generously to Mosby and her husband, City Council President Nick Mosby, both Tuskegee alums, in the past.

Ali is also listed in the report as a $1,400 Mosby contributor, but not as a CMDS manager. Instead, he is identified as an employee of Coldspring Co., a construction contractor.

Outside of the unclear provenance of many Mosby donors, an examination of the report raises questions about how much money is in the state’s attorney’s campaign coffers.

Almost always, campaign committees reconcile the two accounts, often to the last penny, in reports submitted to the State Board of Elections.

This last happened in Mosby’s case in January 2019, when both the committee and the bank reported a cash balance of $53,401.21. Since then, the Harbor Bank account has lagged as much as $27,000 behind committee’s stated balance.

Employees and former SAO employees are linked to the addresses of longtime Mosby contributors:

• SAO’s Communications Director Zy Richardson, according to the report, contributed to Mosby through the Baltimore County address of a media services company whose CEO, Tyrone Taborn, earlier contributed $1,500 to Mosby.

• SA Chief of Administration, Camille Blake Fall, contributed $40 to Mosby through Club Paradise, according to the campaign report. The owner of the West Baltimore bar previously donated more than $3,000 to Mosby.

• SA Deputy Bledsoe (incorrectly listed as living as 2103 Druid Hill Avenue in the report) had her actual Baltimore address listed for contributions by two other individuals, one affiliated with the SAO.

• A donation linked to the Cockeysville address of the CEO of Whiting-Turner Contracting Co. is attributed to an electrician from Parkville. Last year, the electrician, Sekwan Merritt, received media attention when he sued the U.S. government for excluding him from the Paycheck Protection Program because of his criminal record.

2/19 UPDATE: Bryant tells The Brew, “I don’t have any knowledge of or relationship to Char Wilson.”

• DJ Quicksilva, also known as “The Party KingPin,” is listed as a Mosby contributor at an address associated with a former Pikesville businessman.

• A $1,000 contribution listed to a Washington, D.C., attorney has the Bowie address of a public relations and branding expert who has a history of supporting Mosby (see below). Nicole Kirby is listed as the owner of both CarVer Communications and the Bowie property used as the address for attorney A. Scott Bolden.

Listing contributors this way makes it difficult to compare Mosby’s 2021 campaign report with her prior reports, which followed the last name, first name standard.

It also can add confusion to – and diminish the transparency found in – an online Elections Board search. That’s because the database is keyed to a last name, first name sequence.