Talking about herself and her beliefs in an online bio, Keyonna Mayo denounced stereotypes about people who use wheelchairs (“we are people, too”) and said she powers through whatever obstacle she faces every day.

“There is a way to do anything you want in life if you put your mind to it,” the Sandtown-Winchester resident said.

But the lack of proper curb ramps on Baltimore’s streets – and public sidewalks that are uneven, cracked, crumbling and cluttered with obstructions – prevent her from easily and safely getting where she needs to go.

That is why Mayo and two other Baltimore people who use wheelchairs are suing the city for “widespread and ongoing” violations of the Americans with Disabilities Act (ADA) and other federal laws.

“My biggest issue is a lot of the time you don’t know if the sidewalks have curb cuts, so sometimes you end up having to ride literally in the street,” Mayo said, speaking with The Brew about the class action suit filed earlier this month in U.S. District Court.

To get around town for her marketing business and other activities, like shopping or going to the post office, Mayo generally has to maneuver her wheelchair into the roadway and risk being hit by a car.

“That is dangerous with some of the narrow streets we have,” the 37-year-old, who has lived much of her life in the West Baltimore neighborhood, pointed out.

The issue the litigation highlights is important to many city residents, safe streets advocates say.

“Baltimore has an extremely high population of people with ambulatory disabilities, a lot of folks that need safe and accessible infrastructure,” said Jed Weeks, interim executive director of Bikemore.

“But because of the way these sidewalks are set up, they have no access to jobs or anything they need to do, and it’s sad.” 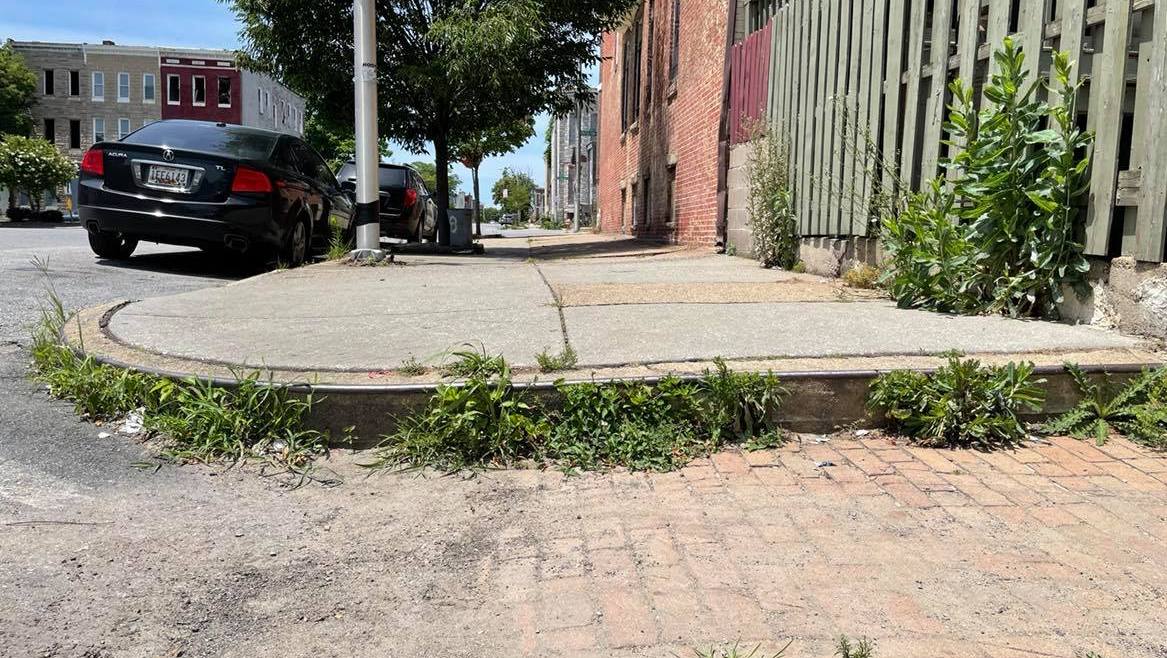 No curb ramp at all at this spot on Westwood Avenue in West Baltimore. (Fern Shen)

Members of the legal team behind the complaint say the problems have remained uncorrected for far too long, considering the fact that the ADA, the civil rights law that prohibits discrimination based on disability, was passed by Congress in 1990.

“In reality, these sidewalks under federal law should have been fixed over 30 years ago,” said Cory Warren, of Disability Rights Maryland, one of the attorneys who filed the action along with lawyers from New York-based Disability Rights Advocates, Civil Rights Education and Enforcement Center
and Goldstein, Borgen, Dardarian & Ho.

The IMAGE Center of Maryland brought the complaint in conjunction with plaintiffs Mayo, Janice Jackson and Susan Goodlaxon on behalf of “persons with mobility disabilities who live in, work in, or visit Baltimore.”

“The City of Baltimore’s curb ramps, sidewalks and pedestrian right-of-way are dilapidated, disintegrating, and filled with objects such as telephone poles, trash, and trees,” the suit, previously reported by The Washington Examiner, charges.

Warren said the condition of city streets infringes on disabled people’s rights and over time diminishes their quality of life.

“As taxpaying citizens of Baltimore, people like Ms. Mayo are dealing with this every day,” Warren said. “Can they get to work safely? Is she going to be able to participate in her community?”

The suit does not seek monetary damages, beyond attorney’s fees.

Rather, it asks the court to declare the city in violation of federal law, order it to implement a plan to remedy the violations and that the city shall “remain under the court’s jurisdiction” until it fully complies with the court’s orders. 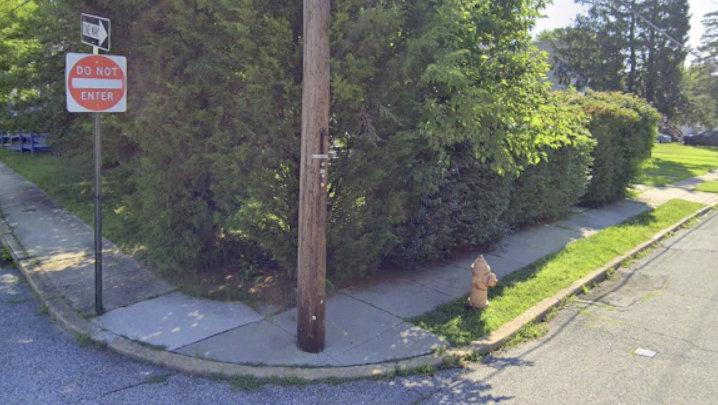 No curb ramp – and a telephone pole blocking the sidewalk – make this spot in northeast Baltimore especially non-ADA-compliant. (Google/dralegal.org)

Forced into the Street

As part of the 12-page complaint, the plaintiffs, all wheelchair users, describe their experiences trying to navigate an illegal landscape.

Goodlaxon, who lives in northeast Baltimore, does not have a single curb ramp on her block of Glenmore Avenue. “This forces her to enter her car from the sidewalk, causing her pain,” the suit says.

The intersection of busy Harford Road and Christopher Street near her home “is particularly dangerous because the sidewalk is cracked, damaged and has a fire hydrant that blocks any use of the curb ramps on this corner.”

As a result, she is left isolated and unable to participate in community activities like neighborhood parties and barbecues.

Only about 1.3% of the 37,806 surveyed curb ramps were determined to comply with the ADA.

Jackson’s neighborhood, near Morgan State University, has poor or missing curb ramps and “trees growing in the sidewalks without wells or sidewalk clearance.”

The suit also includes data showing these illegal conditions are widespread and well-known.

In 2019, the city conducted an evaluation of its curb ramps. Only about 1.3% of the 37,806 surveyed curb ramps were determined to comply with the ADA.

An earlier survey – conducted by the city in 2016 looking specifically at the Central Business District – found 7% of sidewalks had curb ADA-compliant ramps.

“There really is a racial equity issue here. If you go to east and west Baltimore, it’s going to be worse”  – Cory Warren, Disability Rights Maryland.

The plaintiffs also produced their own data, which indicates that the city has missed multiple opportunities to update non-compliant streets and correct the problem over the years.

Sampling repaving work done from 2011 through 2013, they found more than 100 corners where one or more curb ramp was missing.

There is no good data on how many places in Baltimore simply lack these ramps but Warren said they are plentiful – and unevenly distributed.

“There really is a racial equity issue here,” he noted. “If you go to east and west Baltimore, if you go to ‘the Black Butterfly,’ it’s going to be worse.” 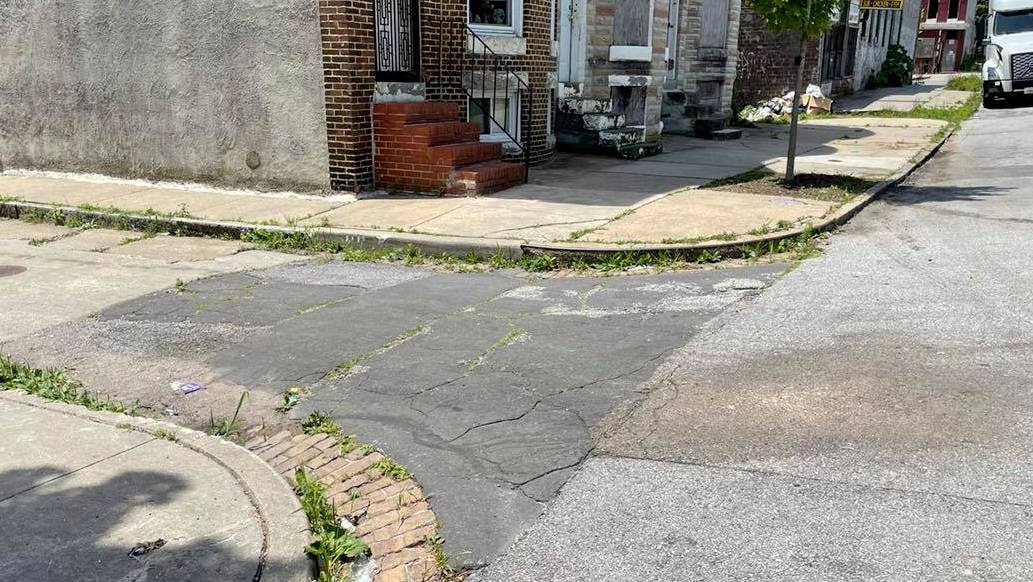 We’re Working On It

Reacting to the lawsuit, Mayor Brandon Scott said in a statement that his administration “inherited a host of longstanding challenges that we are committed to addressing with a true equity approach.”

Scott has assembled a multi-agency task force to address ADA compliance and directed it to use all necessary measures to triage current accessibility complaints.

The city Department of Transportation, the statement said, is developing a remediation plan and timetable for completion, and the task force is expected to provide an update on its work later this summer.

Mayor Scott was willing to address many of the complaints, “but the groups chose to file the lawsuit rather than continue communications.”

Chiding the group for filing the lawsuit, the statement said that the plaintiffs’ counsel “was well aware” that DOT had been working for at least a year with the state to evaluate its ADA standards.

Scott indicated a willingness “to address many of their clients’ complaints,” the statement continued. “But the groups chose to file the lawsuit rather than continue communications with city officials.”

Involving the courts will make sure the disability community has a say in holding city government responsible, Warren said.

“We’ve got to get this done, regardless of whatever administration is in there. This has gone on for 30 years, and people are still suffering.”

– To reach a reporter editors@baltimorebrew.com