The Baltimore Police Department allows sworn employees to take paid vacation or personal leave on days when they are simultaneously earning overtime – even if the hours overlap.

The well-known and condoned arrangement, confirmed in a report released today by the Baltimore’s Office of the Inspector General, is spelled out in the agency’s collective bargaining agreement with the Fraternal Order of Police (FOP) Lodge 3.

Just how much the redundant payments to officers cost taxpayers, however, is not clear in the report.

Responding to a complaint, the OIG interviewed employees as well as officials at the BPD and Department of Finance.

“BPD upper management confirmed that a sworn BPD employee can submit for paid time off and receive overtime pay for hours worked on the same date,” the report said.

“The language in the current MOU [with the FOP] states all days and hours of paid leave time shall be treated as days and hours worked,” it continues. “Thus, once a BPD employee receives authorization for paid leave on a particular date, any additional time submitted for the same date automatically becomes overtime.”

Labor Commissioner Deborah Moore-Carter “acknowledged this form of overtime allowance has been a BPD practice for many years,” according to the report.

Moore-Carter told the OIG “BPD is currently in negotiations with the FOP for successor MOUs, including reforming this practice and other problematic overtime practices.

Responding to the report, Police Commissioner Michael Harrison said he has worked to reduce overtime at an agency where there has “historically been little to no accountability for the stewardship of taxpayer dollars.”

In bargaining talks with the police union, the department is seeking to change the definition of “hours worked” in order to reduce overtime.

Harrison also said he has referred the IG report to his public integrity bureau “to conduct an investigation into potential policy violations by members of the department that are identified.”

Citizen activist Melissa Schober pointed out on Twitter today that the issue identified by the OIG is not new. It was discussed in some detail in the BPD’s 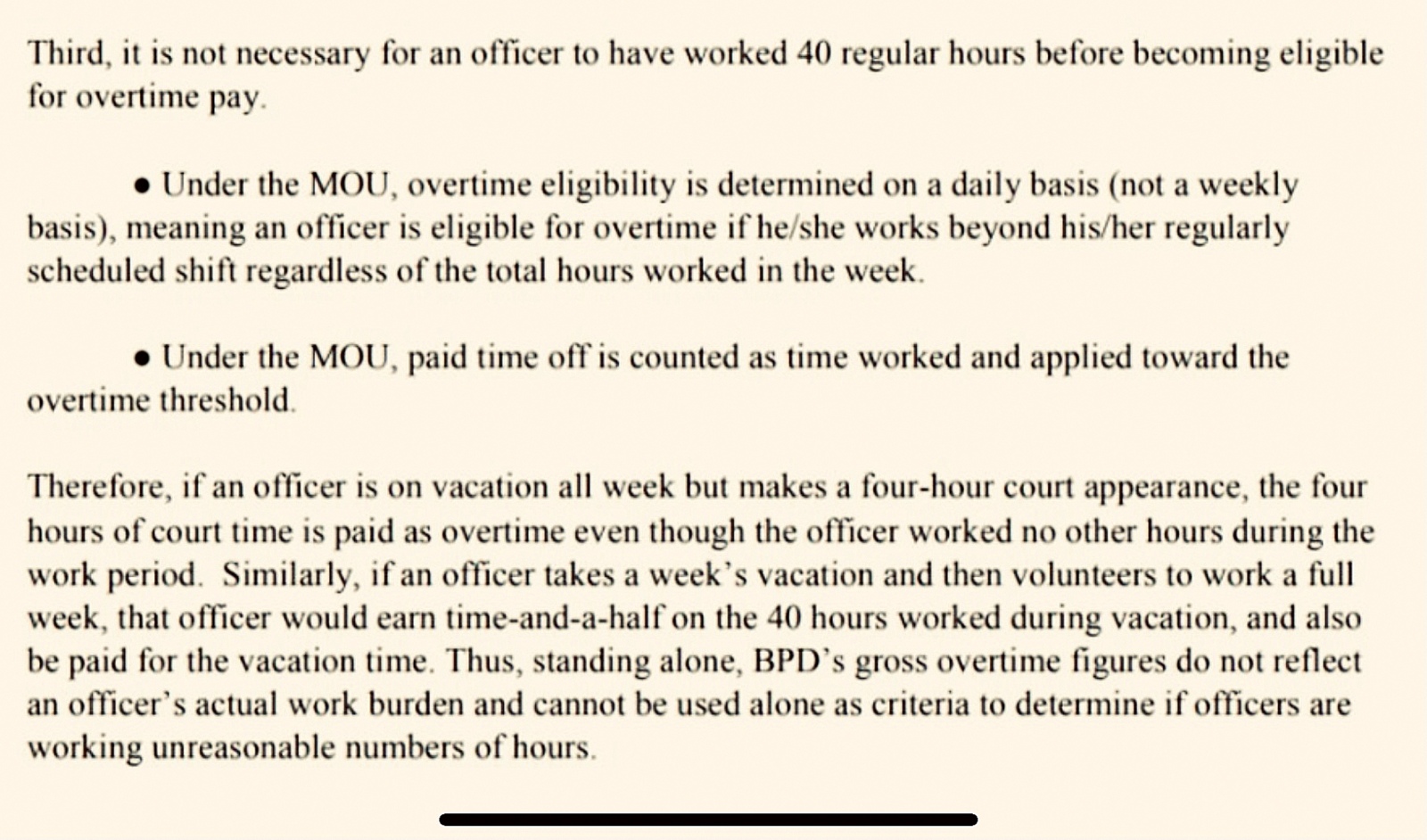 In a lengthy Twitter thread, Schober recounts her efforts to get city officials to respond to problems identified in the overtime audit and a performance audit and end waste in the agency’s $550 million budget.

“Both find – and the audit notes a repeated finding – that there are poor internal controls at the BPD. That the performance measures and outcomes are poorly documented,” she wrote.

“Even if @MayorBMScott hands are tired by the contract, I am deeply skeptical that he could not impose some serious oversight via friends on the Council or the bully pulpit,” she wrote. “Hearings, public meetings, forums are all tools.”