Top Baltimore Fire officials, many commuting to and from Pennsylvania in city-owned SUVs and pick-ups, cost taxpayers $775,168 over the life of the vehicles.

One employee drove a Ford F-150 truck 59.4 miles (as the crow flies) from his home on the Eastern Shore to Fire Department headquarters next to City Hall. The mileage was just a fraction below the 60-mile cutoff in which a city employee is not eligible for a vehicle.

The employee’s use of the pick-up (no one was named in the public synopsis of the report) cost the city $3,220 in fuel and $8,020 in annualized maintenance and repair costs, according to data supplied by the Department of General Services.

In another case, an EMS supervisor ran up 25,513 miles commuting in a 2018 Ford Police Interceptor, a feat that cost taxpayers $7,182 in annual fuel and maintenance costs.

The IG investigation was conducted following a complaint that “lack of oversight and the wasteful execution of the take-home vehicle policy” at BCFD had permitted employees to misuse city-owned vehicles.

The report to Mayor Brandon Scott includes detailed findings of maintenance, fuel, corrective repairs, damage and other vehicle costs, but draws no conclusions. Neither Scott nor City Administrator Chris Shorter issued a written response to the report.

The fire department’s rationale for assigning take-home vehicles to top supervisors – namely so they can respond to fire and other emergencies more quickly – was greeted with scorn by Councilman Ryan Dorsey.

“There is no emergency that can be met by an officer who lives outside an emergency response range. Whether he has a city vehicle or has his own vehicle, he’ll be the last one on the scene when he’s living so far away,” he told The Brew tonight.

Dorsey continued, “The city doesn’t provide paid transportation to and from work for other employees. I’m mind-blown by how anybody can justify this practice.”

According to the report, any BCFD employee with on-call duties who lives in the city or within 60 miles of a fire station is eligible for a take-home vehicle.

A Drain on Batteries

The deputy chiefs typically use the vehicles to make their daily commutes to the city, while the shift commanders – the majority of whom live out of state – often drive fewer than 15 days a month to perform their duties.

How the 35 officers use the cars when off-duty could not be determined, according to the report, because the fire department disconnected the vehicles’ global positioning system (GPS).

How the officers use the cars when off-duty could not be determined because the department disconnected the vehicles’ GPS.

The commanders typically used the cars only for commutes. Once at their designated stations, they were assigned a separate vehicle for work assignments, a practice that Dorsey described as “crazy policy and a waste of taxpayer money.” 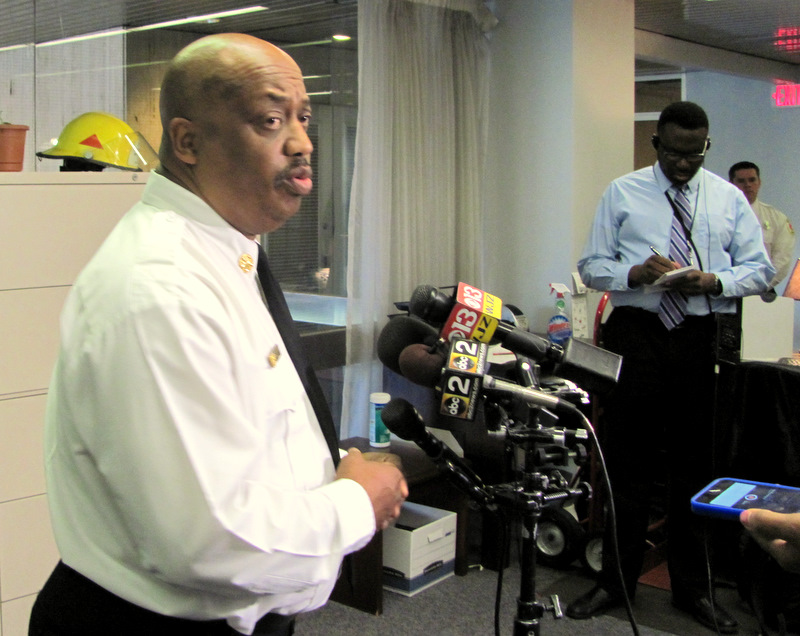 Chief Niles Ford near the start of his tenure in 2015 as Baltimore’s Fire Chief, replacing James Clack. (Mark Reutter)

BCFD’s Manual of Procedure (MOP) states that take-home vehicles are restricted to official business and should not be used for personal activities, except for routine errands while commuting to or from work.

The IG said, however, that Chief Ford expressed “a more relaxed policy” to vehicle usage, saying that the 35 deputies and shift commanders are allowed to travel to restaurants with their families in city vehicles to ensure a quick response if they are called for an emergency.

“The BCFD Chief acknowledged that the on-call member’s family may need to accompany the member to an emergency in those scenarios. The MOP does not specify who is permitted to ride in city-owned vehicles. This may present a risk management concern for the city,” the report noted.

They typically required the employee to park his assigned car at the station and drive a personal vehicle home.

In a brief written response, Chief Ford noted that his department reduced by 10 the number of take-home vehicles in FY20 and “intends to again closely review the current take-home vehicle distribution and related policy to make adjustments as possible.”

He defended the policy of assigning city vehicles to senior staff, saying it improves the “efficient and effective performance of BCFD’s emergency operational response,” while noting it is also important to “take into account the need to avoid potential financial waste.”

“We appreciate your review and investigative findings as we continuously strive to provide the very best service to the citizens and visitors of Baltimore,” he concluded.