The process of reconfiguring the old Baltimore Sun building on North Calvert Street is getting pricey.

Just 16 months ago, the city said that making improvements to the space, in order to relocate the Baltimore Police Department’s Central District staff, would cost $1.8 million.

Tomorrow, the Board of Estimates is scheduled to reimburse the owner $4.1 million for unspecified improvements to a building that, standing vacant for several years, recently began housing about 170 police officers as well as fire and emergency management units.

Unlike many commercial leases, the city is fully responsible for paying the owner, Atapco Properties, for the “build-out,” plus a 5% management fee.

On top of these costs, the city is paying monthly rent to the old-line Baltimore-based property manager that could increase by 48% over the three-year life of the contract.

A key factor is whether the city decides to lease the entire building.

One scenario under consideration is to house the 911/311 communications center, police forensic lab and other agencies in the building.

If City Hall opts not to fully lease the structure, the contract specifies that an additional monthly rent of $62,500 will be paid to Atapco, followed by the city’s agreement to vacate the building.

Such unusual terms led then-Comptroller Joan Pratt to vote against the deal when presented to the Board of Estimates in April 2020.

Pratt said she was worried that the contract was “not a good value for the taxpayer,” which Mayor Bernard C. “Jack” Young dismissed as shortsighted.

“I believe strongly in fiscal responsibility and am pleased to identify and move forward with a unique opportunity,” Young responded, saying the city would save at least $800,000 in maintenance costs on the older buildings that the BPD and others would vacate.

He was flanked by Police Commissioner Michael Harrison, who called the contract’s approval “a great day for the Baltimore Police Department.” 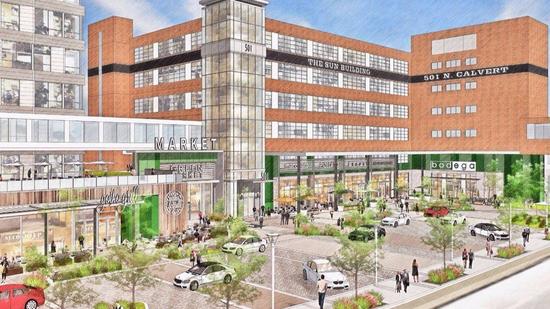 The original plans for the Sun building conversion were very different. (Atapco Properties)

Brandon Scott, then City Council president, also voted in favor of the lease. Now mayor, his office introduced the $4.1 million reimbursement that is coming before the spending board for approval tomorrow.

Atapco’s $15.5 million purchase in 2017 of the aging complex, which once contained the editorial offices and printing plant of Baltimore’s premier newspaper, was widely considered a bust before the city came to the rescue.

The new owner at first marketed the building as a hub for upscale living. It unveiled plans for a grocery store surrounded by retail, office and restaurant space connected by a pedestrian mall.

“We’re having a lot of conversations. There’s a lot of interest,” Atapco President Kevin McAndrews said at the time.

But no grocery store or restaurant chain snapped at the bait. By December 2018, McAndrews was lamenting to the Baltimore Business Journal that the age and size of the property made conversion difficult.

Left unsaid was the building’s proximity to homeless encampments and a bleak landscape of outer downtown lots filled with parked vehicles during the day and left barren the rest of the time.

During that same month in 2018, a sewer line broke at the Central Police District Station, sickening an employee and forcing staff to flee to the police headquarters building at 601 East Fayette Street.

With the station out of service, the die was cast for a grand plan to consolidate an array of scattered public safety personnel into one building.

Currently, Central District staff inhabit the lobby and third floor of the building, joined (or soon to be joined) by EMS training and administration personnel, CitiWatch, the Warrant Apprehension Task Force and others. Much of the recent improvements involved reconditioning the garage space for EMS vehicles.

Under the lease, the city is allotted 50 free spaces in the garage north of Centre Street with access to the pedestrian bridge linking it to the main building.

Atapco is responsible for basic maintenance, while the city pays for janitorial services, security and trash removal.

According to tomorrow’s agenda, “The relocation of the assets will enable the city to sell or develop several aged buildings that are, along with their operating systems, beyond their useful life.”

Below: Starting at 3:30, Ex-Mayor Jack Young and Police Commissioner Harrison celebrate the lease of the ex-Sun building at an April 22, 2020 press conference.