Moratoriums lifted last year “translated to almost half a million excess cases and over 10,000 excess deaths,” Goldblatt told the crowd.

The coalition organized the event primarily to urge Hogan to continue the year-long order order that offers protection to tenants able to prove they couldn’t pay rent because of the pandemic.

Hogan has signaled he will not be issuing any new measures to halt evictions since the federal CDC announced a new ban on evictions in places with substantial or high transmission.

The CDC ban, which ends in October, currently applies to most Maryland counties and to Baltimore City. But the ban does not apply to jurisdictions whose transmission rates fall to “moderate” or “lower” levels over a two-week period.

Baltimore has wide disparities in Covid case rates and vaccination rates, with data showing some parts of the city where 70% remain unvaccinated. 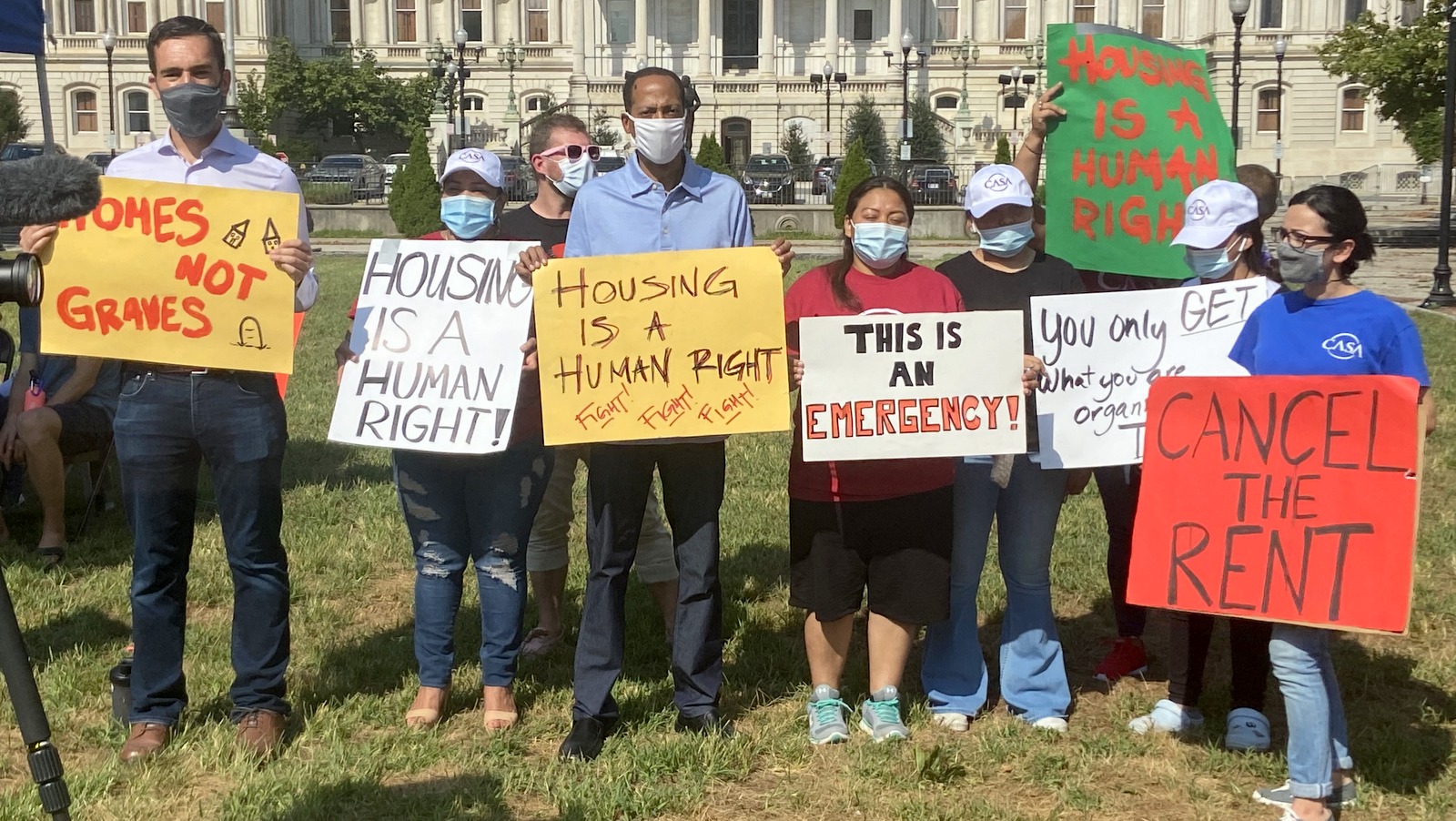 Baltimore Renters United and allies call on Gov. Larry Hogan to extend the moratorium on evictions in Maryland. (Timothy Dashiell)

A Chance to Rebuild

Coalition members said that residents who have lost income because of the pandemic are already being forced from their homes, even with the state and federal protection orders in place.

Many, they said, are being threatened by landlords with legal, and sometimes illegal evictions.

An estimated 129,000 Maryland tenants are behind on rent and over 20% of Baltimore renters face eviction, according to the group.

Some tenants shared their experiences yesterday, including city resident Gail Arrington who is at risk for eviction after having to stop work following a potential Covid-19 exposure.

“I’m sure everyone has had a setback or a hard time within these past couple years – that doesn’t make it right for these people to just kick us out of our homes,” Arrington said.

“I want Governor Hogan to extend the order,” she continued. ” Just give us a chance to rebuild and get back on our feet.”

The city currently has about $80 million in Emergency Rental Assistance Program (ERAP) money and state funds, but some tenants yesterday said they have had difficulty getting access to the funds.

Speakers urged Baltimore Mayor Brandon Scott to follow through on his commitment to increase the pace of rental assistance dissemination through an eviction diversion program in the city Housing Court.

State action, they said,can ensure those programs are being being properly implemented.

“Governor Hogan should require landlords to use emergency assistance before they can move to evict and create an eviction diversion program that pauses eviction cases so that renters can get assistance and legal help,” said Terrell Askew, an organizer with United Workers.

The advocates also called on Scott to fully fund and implement a right to counsel program for renters facing eviction, created as a result of a bill he signed into law last year.

“We hope and pray that everyone will move swiftly and transparently do exactly what they said they would,” Askew said.