The Scott administration has canceled a rally whose speakers were to include ex-Trump advisor Steve Bannon, right-wing provocateur Milo Yiannopoulos and commentator Michele Malkin, among others.

Planned at the MECU Pavilion on Pier Six, the rally had been timed to coincide with the annual fall meeting of the U.S. Conference of Catholic Bishops, to be held at the nearby Marriott Waterfront.

“They pretend it’s the tone, and in this case, some idiocy that we are going to firebomb the Baltimore harbor and attack the bishops’ conference, but it’s really about the content of what would be said from the stage. And everybody knows it,” Voris complained in a post on the group’s website.

Shea has not yet returned The Brew’s request for comment.

Voris says Shea told him over the phone that he canceled the event because of Church Militant’s links to the January 6 insurrection at the U.S. Capitol, a claim Voris said online the group “vehemently denies.”

While the organization has not been linked to the attack on the Capitol in which five people died, Bannon has.

A Bannon “War Room” podcast, for instance, was banned from Twitter after he suggested that Dr. Anthony Fauci and FBI Director Christopher Wray should be beheaded.

“I’d put the heads on pikes. Right. I’d put them at the two corners of the White House as a warning to federal bureaucrats,” Bannon said. “You either get with the program or you are gone.”

He later insisted the comments were a metaphor. Bannon continued the rhetoric in the run-up to the January 6 insurrection.

After pushing unsuccessfully for Trump supporters to overturn the election, he then turned to exhorting them to seize control of the Republican party, Pro Publica reports.

Voris, who has calls and an email from The Brew, has written a letter to Shea demanding the city reverse its decision and reinstate the rally.

Giving Shea a September 3 deadline to respond, he threatened to sue the city.

Voris’ assistant, Mary McCann, called to say he is “meeting tomorrow afternoon with an attorney in Baltimore” and would be better able to comment afterwards.

In promoting the cancelled rally on the group’s website (“Get out of your homes and come to Baltimore!”), Voris wrote that the event was intended to decry the “corruption and coverup” of the Catholic Church’s sex abuse scandal and to protest church leaders’ embrace of “modernist goals.”

He called on people to join him at the $25-a-head rally and denounce the bishops for “driving faithful men from the seminary, the destruction of belief in the Real Presence [and] their supplanting of theological truths with Marxist political policies.”

“Another goal,” he added, “is to expose the rot and gather together in a large and boisterous manner so as to show that we know their game of evil and to let them know a new day has dawned.”

After spiking the event last month, Voris said, the city has been unable to cite any clause the group was violating in its contract to hold the waterfront event.

“Relying on that agreement,” Voris said in his letter to the city, “we received more than 2,000 reservations, with the expectation the event would reach full capacity. Many attendees purchased plane tickets and made hotel arrangements.”

“We had planned on praying the Rosary. Thus the event was both in the public interest and also had an overriding religious dimension,” he said. He also noted that the group rallied at the same location without incident during the U.S. Bishops’ meeting in 2018.

News that the Church Militant was planning a gathering at the city’s tourist waterfront sparked alarm in some quarters over the summer and calls for the Archdiocese of Baltimore to intervene. 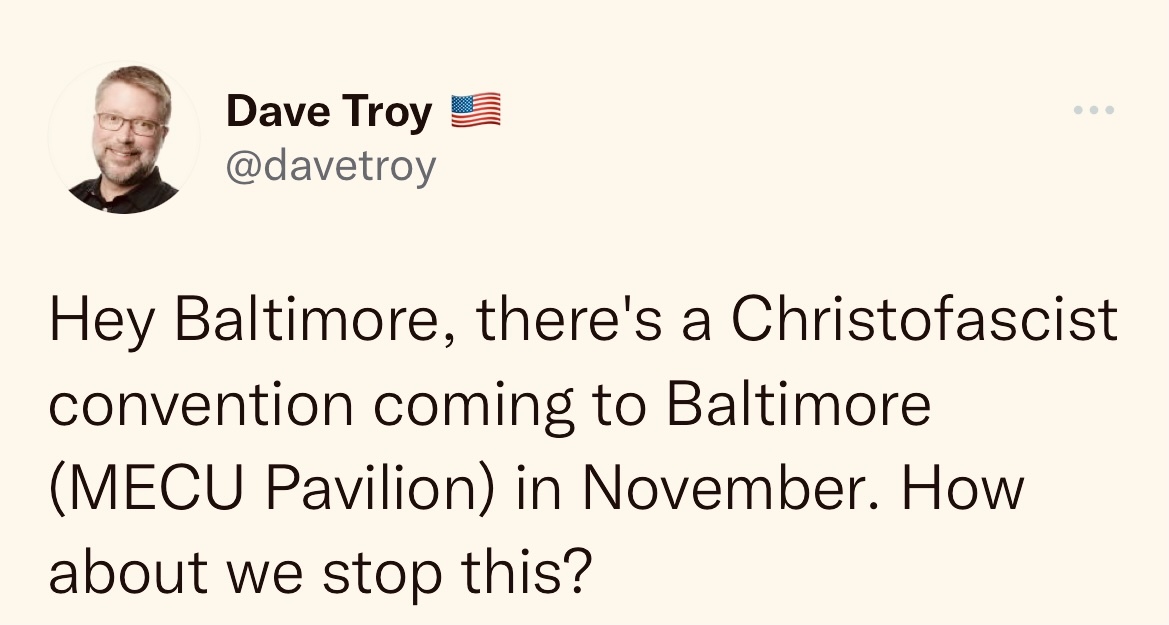 News that Church Militant was bringing Steve Bannon and others to speak at the Inner Harbor in November sparked alarm among some in July.

Church Militant is known for its anti-immigrant and anti-gay ideology. In a story published after the 2016 election, the New York Times described Church.Militant.com this way:

“The site’s right-wing stances against globalism, immigration, social-welfare programs and abortion, as well as its depiction of an existential war against radical Islam, mesh with many of the positions espoused by Mr. Trump and his inner circle.”

The Southern Poverty Law Center lists Church Militant/St. Michael’s Media on its watch list of hate groups as a result of anti-LGBTQ ideology and organizing.