The far-right Catholic group Church Militant has sued the city of Baltimore in federal court, saying the decision by the administration of Mayor Brandon Scott to cancel the group’s upcoming rally at the Inner Harbor was “obviously unconstitutional.”

“They don’t get to shut down our speech. It’s that simple” said Michael Voris, Church Militant’s founder and CEO of St. Michael’s Media, speaking with The Brew.

The Michigan-based group contends that its First Amendment rights to free speech, religion and assembly were violated when City Solicitor James L. Shea canceled the organization’s contract to hold the meeting on November 16 at the MECU Pavilion on city-owned Pier Six.

Randazza said he was hoping a hearing on that motion could take place as soon as today so that the group’s “Bishops: Enough is Enough Prayer Rally” could get back on track.

The suit, which asks for unspecified punitive and compensatory damages and also names Scott and Shea personally, charges that “St. Michael’s reputation will be harmed if these rally-goers end up having wasted their money due to Shea’s unconstitutional actions.”

City officials said the  meeting was canceled because of the potential for significant disruption, a concern that the lawsuit says is unfounded.

Shea did not “have any factual basis whatsoever to believe the rally would pose a risk of violence to anyone or anything,” the complaint states.

According to Voris, Shea told him over the phone that his cancellation was based on reports that Church Militant had ties to the January 6 assault on the U.S. Capitol building in Washington, a claim the group denies.

Stefanie Mavronis, deputy communications director for Mayor Scott, provided a statement from Shea saying that the cancellation was prompted by “the characteristics of the location and the likely reaction to the planned program.”

Shea did not elaborate, but among those scheduled to speak at the Pier Six rally was former Trump advisor Steve Bannon, who was widely reported to have been involved in encouraging Trump supporters to overturn the 2020 election.

ABC news said that Bannon “repeatedly used his platform to promote the January 6 rally, hosting rally organizers on his podcast at least 16 times amid the push to overturn the election results.”

According to Voris, Bannon was asked to focus on church reform issues at the rally, as part of its purpose “to oppose the moral corruption, the financial corruption and the ethical corruption of the Catholic Church.”

The one-day event was timed to coincide with the annual fall meeting in Baltimore of the U.S. Conference of Catholic Bishops (USCCB). The bishops will be meeting at the Baltimore Marriott, located on the city waterfront overlooking the MECU Pavilion.

Neither Shea nor USCCB have responded when asked about Church Militant’s claim that Shea was asked by church officials to cancel the rally.

Church Militant, which produces videos and articles about Catholic news, regularly blasts the bishops for covering up sex abuse within the Catholic Church. The group also denounces them for supporting LGBTQ rights, globalism, immigration and other causes they regard as immoral or dangerous.

Writers on the Church Militant website have called vaccine mandates “the Covid Reich,” called gay men “mentally ill man-babies,” referred to Covid as “the Wuhan virus,” warned that climate change is “a Marxist ploy” directed by the devil, and denounced Black Lives Matter as “a terrorist, Marxist, pro-LGBT, pro-abortion organization,” adding with amazement, “yet ordinary Americans are lining up behind it.”

“Worried your city is becoming Sodom and Gomorrah?” a section of the website asks. “Learn where Catholics are moving.” 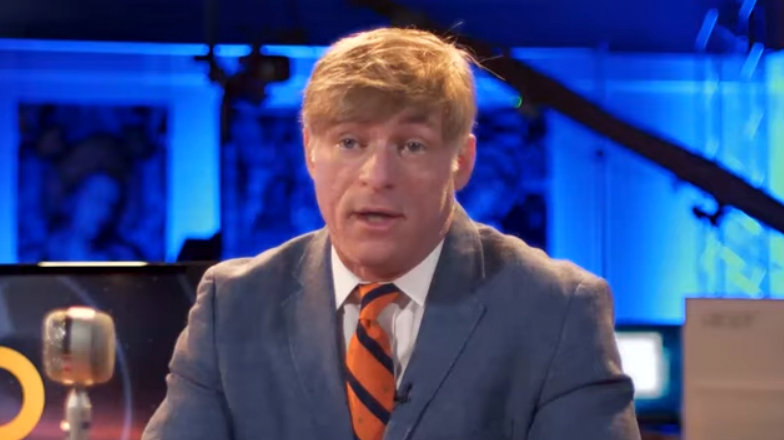 “For some Catholic scholars and anti-hate advocates, the emergence of Church Militant theology in a politicized and highly partisan way is disturbing,” the New York Times wrote in an article Voris characterized as “a hit piece.”

Yesterday, Voris complained  that the reaction and coverage Church Militant has drawn in Baltimore is “grossly unfair” and a product of mainstream media bias.

“You’re all down with the whole homosexual agenda,” he said. “Are we a hate group because we are telling them, ‘You’re not living according to your vows?’”