Within days of an op-ed questioning whether Mayor Brandon Scott had the political courage to protect the independence of the inspector general, we got the answer.

He made clear that he would not ask the City Council to place a proposed charter amendment on the 2022 ballot that would remove city officials subject to the jurisdiction of the IG from the Inspector General Advisory Board.

The amendment was recommended by advisory board member Ronald Weich, dean of the University of Baltimore School of Law, and follows the “best practices” of the Association of Inspectors General.

The purpose is to keep members off the board overseeing the IG who could come under investigation by the city’s corruption watchdog.

Scott’s explanation was glib at best, disingenuous at worst. He never stated whether he believed the proposed change was a good idea or a bad idea. 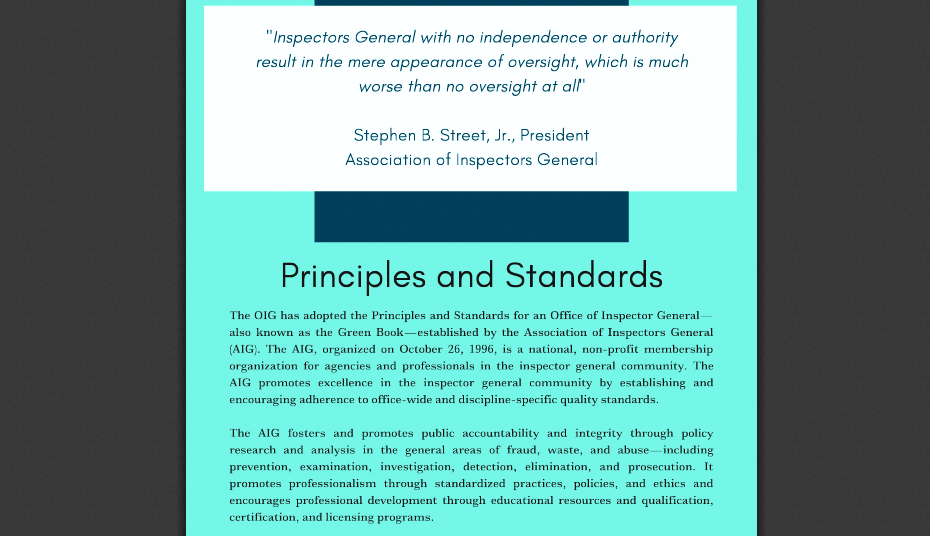 Excerpt from the 2021 OIG Annual Report.

Scott told Maryland Matters he would not seek to change the advisory board – which has the power to fire and hire the IG and to review and approve its yearly budget – because “the citizens of Baltimore overwhelmingly voted for this board to be this way.” He was referring to the current make-up in which five of the seven members are city officials.

He knows full well that the decision by voters to approve the charter amendment establishing an independent IG’s office was not based on that level of detail.

The actual question for approval or disapproval by voters, as it appeared on the 2018 ballot, contained 118 words describing the proposed charter amendment. Significantly, it included no mention of the advisory board or its composition:

A voter would have had to refer to the Council website and read the actual IG bill for that level of detail.

So, yes, city voters legally approved the composition of the board, but it is misleading for Scott to imply that the composition played any role in their approval of the charter amendment.

His argument also avoids another fact that he is fully aware of: City voters will overwhelmingly approve a charter amendment assuring the independence of the IG by removing city officials from the advisory board if the measure gets on the ballot.

It became clear during the controversy over the performance review of the IG by the advisory board that the IG’s office is one city agency that residents believe in.

Its importance to the beleaguered residents of Baltimore goes beyond its substantial accomplishments. The agency represents hope that the incompetence and corruption that plagues city government can be overcome.

City officials constitute the majority of the board (their terms last through 2024). They include two City Council members appointed by Nick Mosby.

Perhaps, being relatively new to Baltimore government at the time, she was overly optimistic about the objectivity of the city officials on the board. If so, she was quickly disabused of that optimism during the performance review process.

Good leaders change their views when dictated by the facts, and laws are revised from time to time to make improvements based on experience.

Good leaders change their views when dictated by the facts, and laws are revised to make improvements based on experience.

Provisions of the city charter are not cast in stone. They are routinely tweaked to better serve the interests of city residents.

For Scott to suggest otherwise is nothing but a hollow effort to justify his unwillingness to stand up to the Mosbys.

The other independent member of the advisory board, Dean Donald Tobin of the University of Maryland School of Law, stated that the “people of Baltimore can decide” whether the City Council got the composition of the board right in 2018 or whether it should be changed.

They can only make that decision if the proposed charter amendment is on the ballot, however.

It is now highly doubtful that a City Council headed by Mosby will place the amendment on the ballot for approval by the voters at the election on November 8, 2022.

There is another way to get it on the ballot, a voter petition.

The future independence of the IG’s office – and therefore its effectiveness – likely depends on whether at least 10,000 registered city voters sign a petition to place the amendment on the ballot.

The petition must be submitted to the mayor by August 1, 2022.

Whatever else happens, city voters will likely not forget the mayor’s timidity in this matter. This was not the display of leadership that they were hoping for a year ago.
_________________________
• David A. Plymyer retired as Anne Arundel County Attorney in 2014 after 31 years in the county law office. He can be reached at dplymyer@comcast.net and Twitter @dplymyer.