They huddled under umbrellas in the misty rain, standing on the sidewalk in a line that wrapped around the block. Some came with canes and walkers. Others held small children’s hands.

More than 300 people waited Thursday at the Erdman Shopping Center in East Baltimore to be tested for Covid-19 at a site set up by the city Health Department.

Across town in northwest Baltimore, a new drive-up site drew more than 1,000 people.

Afraid they might get or spread the Omicron variant of Covid now surging through the city, people urgently wanted to get tested, they told The Brew.

But doing so proved to be a major challenge:

Stores have pretty much sold out of rapid test kits. Reservations to be tested at pharmacies are nearly impossible to obtain. And the limited number of city-sponsored testing sites have been, like the one at Erdman, overloaded.

So here were people standing in the rain, persisting.

“Should I not get together with family on New Years Eve? Do I maybe have Covid,” asked Durrell Johns, as the Erdman Avenue traffic whizzed by.

“I would like to know. Trying to do the right thing here!”

From across the street, a furious Damon Bowen was videoing the scene with his cellphone.

“It’s ridiculous!” Bowen said. “People get paid a lot of money to anticipate this and prevent it from happening.” 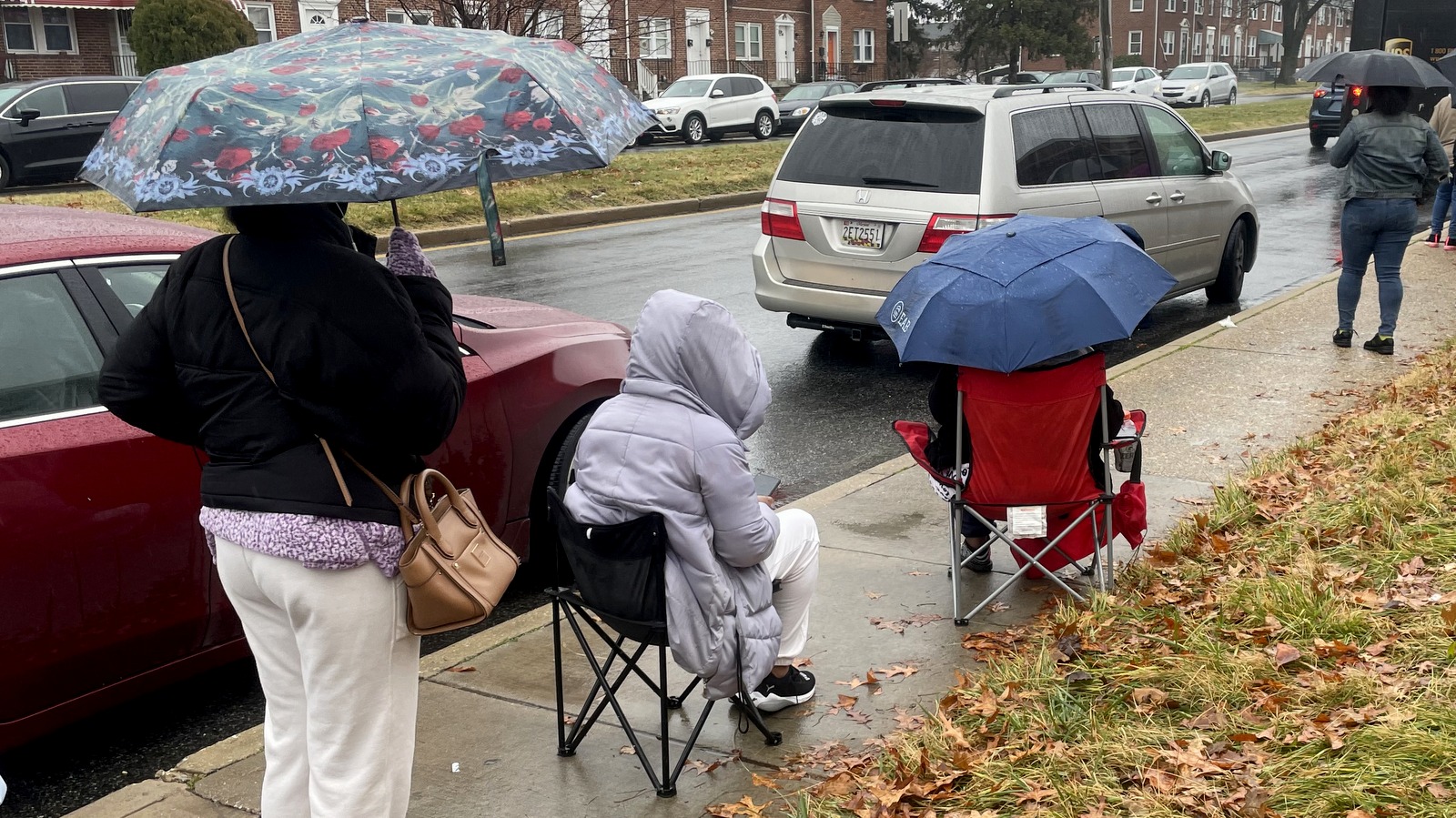 Some brought their own chairs to get through the long wait on Thursday at the Erdman testing center. (Fern Shen)

The 55-year-old substance abuse counselor had come to get some free rapid tests – for himself “and maybe for some of the guys in our program” – but was disappointed to hear the health department had run out of them.

What was being offered was an hours-long wait to be tested by staffers. And the results might take days to come back.

Why, he wanted to know, weren’t there more rapid tests distributed and test sites set up?

He was not comforted by the fact that unvaccinated people account for most of the Covid patients now filling hospitals. Or news reports quoting some experts saying that Omicron, though highly communicable, appears less likely to lead to serious health consequences.

“I know several family members and friends – all vaccinated – who have [Covid] and are having the body aches, the can’t talk, can’t breathe, can’t eat” symptoms, he said.

Why hasn’t Mayor Brandon Scott imposed a lockdown – closing restaurants, theaters and other public gathering places – as he had before?

“It’s all economically based,” said Bowen, answering his own question. “They won’t shut anything down because it will hurt businesses.”

Such comments captured the feeling of disconnect for many at the end of a rugged 2021, watching officials permit business-as-usual to continue even as Covid has overwhelmed hospital emergency rooms and set case-count records.

New Year’s Eve crowds packed many Baltimore bars and restaurants. In-person classes for city students will resume this week (after a two-day delay for voluntary testing) despite protests from teacher and parent groups. Thousands of fans, kept home last year, will gather today at M&T Bank Stadium to watch the Ravens play the Los Angeles Rams.

The gulf between between what city residents are feeling and what City Hall is offering was evident at the online Covid update held Wednesday by Mayor Scott.

The live Facebook/Instagram session was highly anticipated – with many wondering if Scott would move the city beyond the current lightly-enforced indoor mask mandate.

Viewers instead heard officials repeat what had been reported in the news for more than a week:

Baltimore’s Covid case rate and hospitalization rate are “the highest we have seen during the entire pandemic,” Health Commissioner Letitia Dzirasa said.

“As of today, we had 550 Covid related hospitalizations in Baltimore – up from 493 just yesterday,” Dzirasa noted. “Our current positivity is 24%, well above the 5% threshold.”

(When newly-sworn-in Scott shut down indoor and outdoor dining a year ago, his administration cited numbers that were far lower. Back then, 366 people in the city were hospitalized for Covid-19. The testing positivity rate was 7.3%.)

The major news out of the Wednesday online event was that Scott was orderiing another 100,000 at-home coronavirus tests, to be distributed by community partners. He also promised an additional testing site the next day (at the former police training center at the corner of Northern Parkway and Park Heights Avenue) with more sites to come.

“To meet that increased demand, I am pleased to announce that we’ll be standing up additional testing sites through out the city over the next few days,” he said. 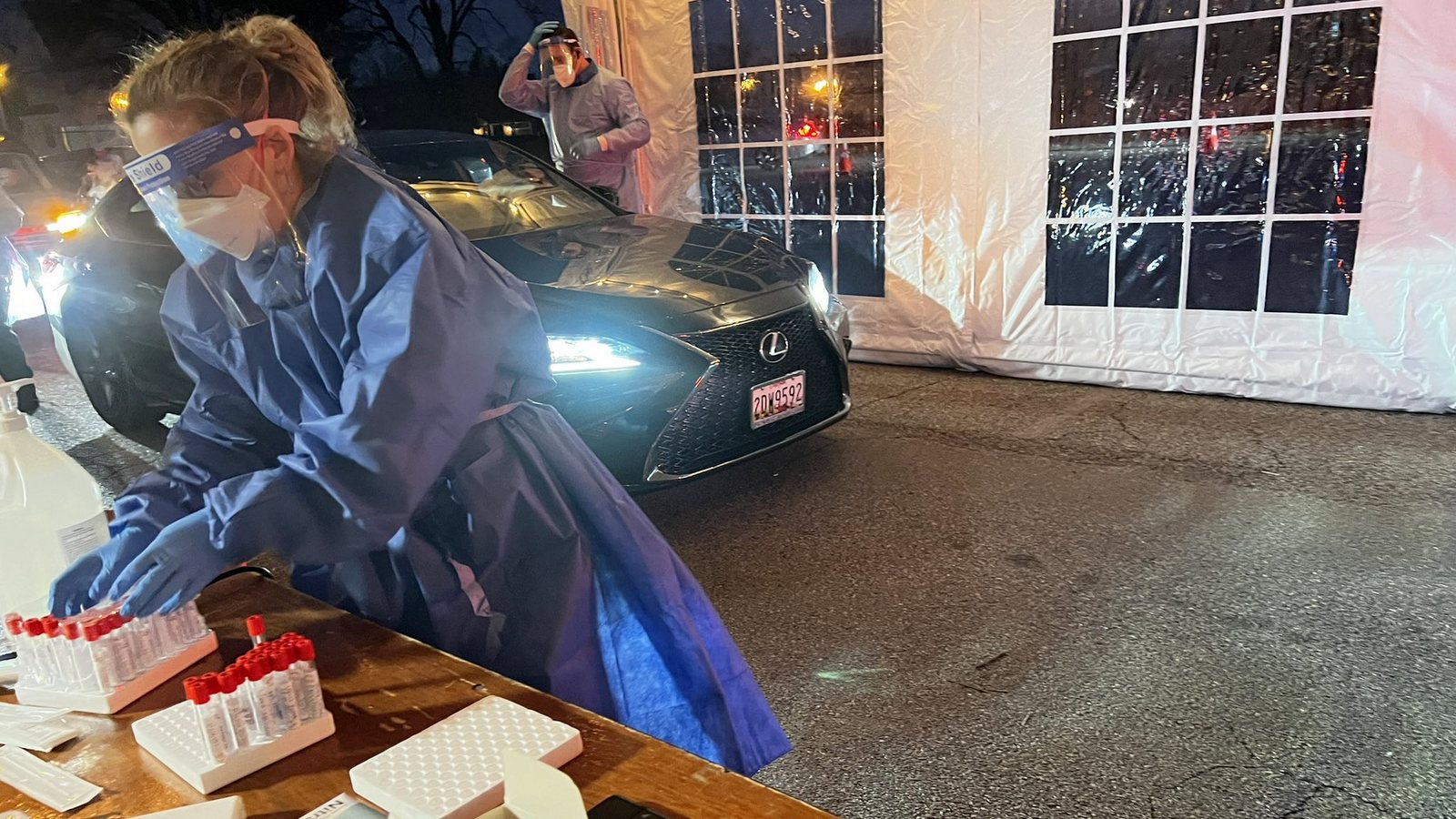 Scott’s announcement, which included reminders about the importance of hand-washing, masking and vaccination, wasn’t cutting it for many of the online event’s 400-plus commenters:

“Going out to restaurants and bars shouldn’t be in the mix at all at the moment!”

“More pop up sites!!! I can’t even get an appointment to get a negative test or a doctors note to get back to work.”

Many grilled city and school officials about the decision to resume in-person classes amid the surge.

“Please explain how returning kids to crowded schools prior to knowing their Covid status is productive?”

“Makes no sense…send them to school then test them…it’ll be too late if they had it already when they come back!”

“There is zero social distancing at my child’s school. Also, windows that don’t open, no soap in bathrooms, and improper ventilation.”

“I get an email every day about a child has tested positive in my kids school.”

Also appearing at the online session, City School CEO Sonja Santelises addressed some of these concerns.

She noted that classrooms are being cleaned, ventilation issues are being addressed and that “it’s easier to get children tested when they are in school.”

Santelises and the other officials said they were struggling to react to a resurgence of need of epic proportions.

Since the Omicron variant began to sweep through the city, Dzirasa pointed out, the number of people seeking tests had “doubled, tripled, and even quadrupled.”

Meanwhile, the health department’s Twitter account, once praised for its sassy social media campaign, was getting hammered. 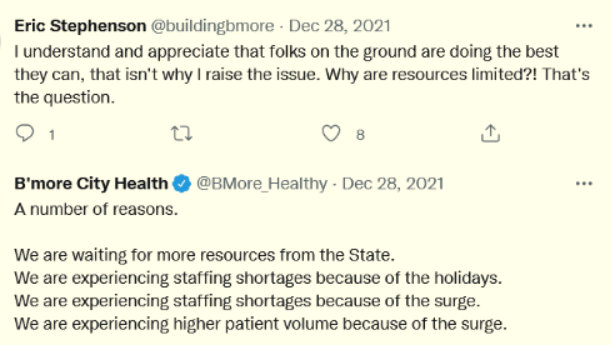 “I take this seriously”

Keisha Briggs, who was standing far back in the line at the Erdman Shopping Center site, had been experiencing that “higher patient volume” for days.

Worried about a possible Christmas Eve exposure, she had waited three hours earlier in the week just to get registered to be tested at a Patient First location in the city.

“At that point they told me there were 67 people ahead of me and I left,” she said. “I finally got the call from them two-and-a-half hours later.”

A security officer, Briggs had come to get the free city test for her 12-year-old son.

“I’ve never seen anything like this,” she said, looking at the long line of other people waiting in line with her on Elmora Avenue.

One of them was Katie, a 22-year-old who works in a domestic violence center.

She said she and other family members had Covid in 2020, most likely exposed at an uncle’s funeral. The experience left her determined to be cautious, get tested and avoid infecting anyone else.

“My father is still dealing with memory problems. And I still struggle with taste. I was hospitalized for four nights,” she said. “So I take all this very seriously.”

Her opinion of the city’s and state’s response to the pandemic has changed.

“I felt like Maryland had a good plan at first,” she said, gesturing at the long line. “Now I don’t really think so.” 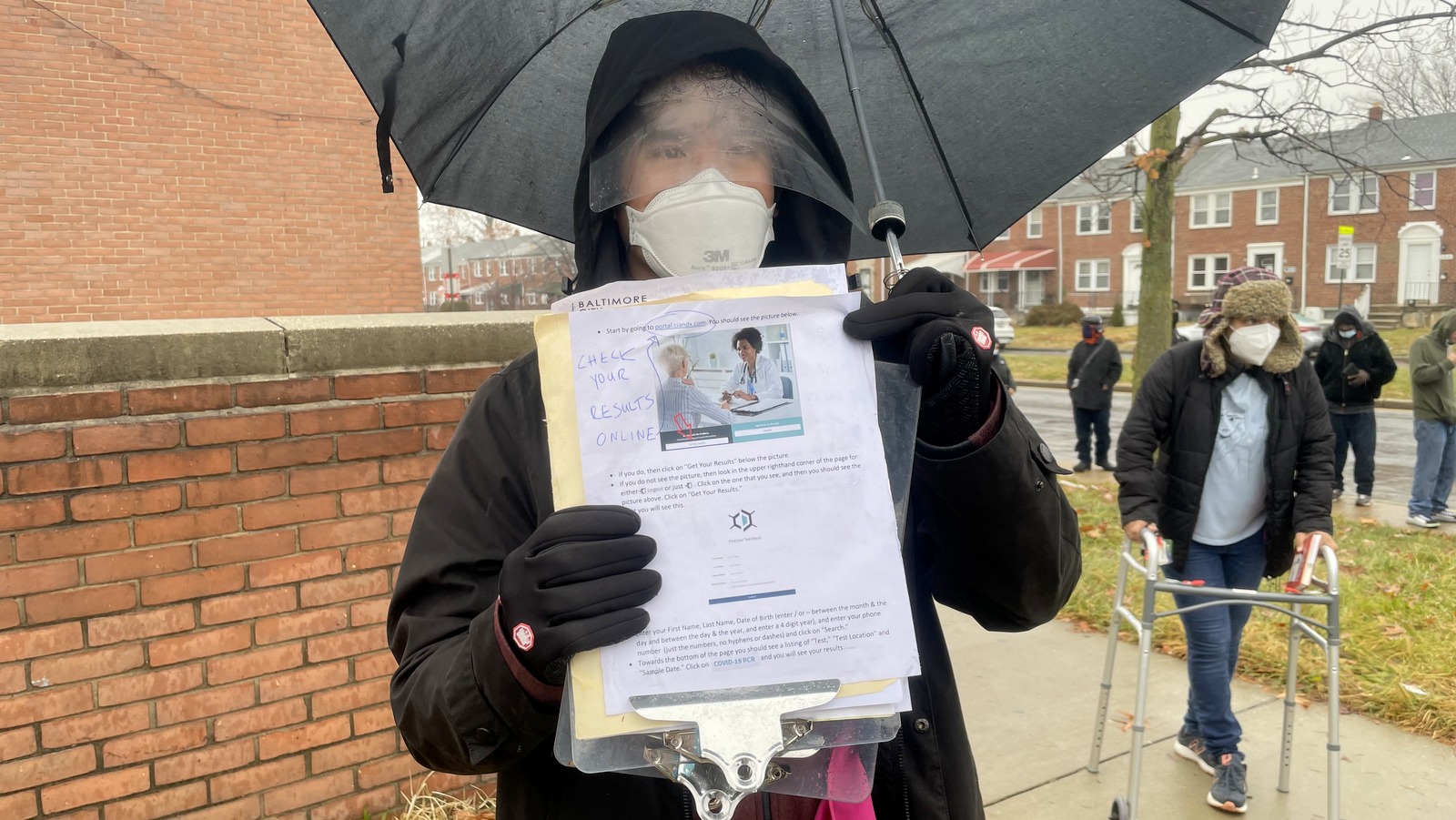 A city staffer signs up people to be tested for Covid-19 at the health department site at the Erdman Shopping Center. (Fern Shen)