Skeptics like me predicted it. But there is no joy to be found in the fact that the $389 million plan to redevelop Pimlico Race Course and Laurel Park is in trouble, with completion of the project delayed for at least two years.

It is another reason, however, to revisit the way in which community and economic development policy is shaped in Baltimore.

Specifically, the oversized role of business and financial interests in public policy must be reduced, while more people interested in revitalizing blighted neighborhoods – and increasing access to sustainable employment for the residents in those neighborhoods – must be brought to the table.

Gary McGuigan, executive vice president of the Maryland Stadium Authority, which is overseeing design and construction of both racetracks, has refused to commit to a definite timeline.

He suggested to the Baltimore Business Journal, which broke the story, that construction would not even begin until after the Preakness in May 2023.

The sale of $375 million in state bonds to finance the project, originally slated to be completed by this June, has not even begun.

Predicated on the Past

From the start, the Pimlico project was based on sentimentality about past glories, not on a vision of the city’s future.

The heyday of horse racing in the United States, and in Baltimore, is long gone. Whatever future the industry has lies in online gambling – meaning that spectators and physical venues are almost superfluous.

And that’s if horse racing has a future at all. There are doubts that the industry will ever be able to rid itself of horse doping, which has fueled increased calls to end the sport because of the cruelty it inflicts on the animals.

The commitment of state funds for the project, ostensibly necessary to keep the Preakness Stakes in Baltimore, was always more of a gamble than an investment. And a poor one at that.

The General Assembly’s approval of state financing for the project was front-page news in 2020. The next year, when the Stadium Authority selected architects and engineers for the project, its boosters crowed.

“The horses are out of the gate now,” declared State Del. Samuel “Sandy” Rosenberg, whose district includes Pimlico.

Unsurprisingly, the announcement of the protracted delay was not widely reported. There is egg on lots of faces.

The Stronach Group, which owns both Pimlico and Laurel, was the primary beneficiary of the General Assembly bill. Alan Rifkin is general counsel for Stronach and was chief legislative officer to former governor William Donald Schaefer.

A BBJ reporter tweeted that Rifkin pledged during a town hall meeting on the bill that “shovels will go into the ground the minute after the General Assembly approves the legislation and the governor signs [it].”

If any digging had started, it now has stopped. 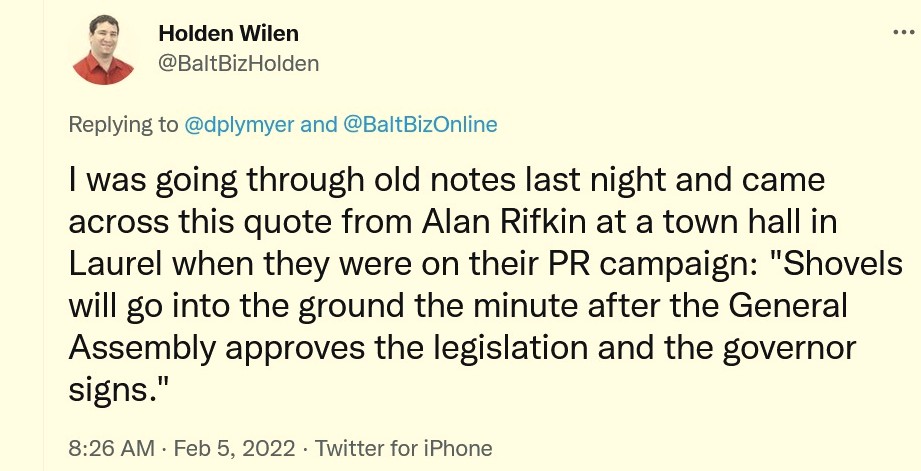 It would be easy to dismiss the Pimlico project as an anomaly, with judgments skewed by the desire to retain a Baltimore tradition and the economic benefit of hosting the Preakness.

But that would ignore a recent history of other improvident economic development initiatives.

On the other hand, they have done little, if anything, to revitalize blighted neighborhoods, increase access to long-term employment for city residents or stop the bleeding in the city’s traditional central business district, which now suffers from a 24% vacancy rate.

Another “game changer,” the so-called Superblock project in the former retail heart at Howard and Lexington streets, has been stalled since the O’Malley administration – and over those nearly 20 years has arguably increased blight.

The Stadium Authority is now seeking legislative approval to borrow up to $1.2 billion to pay for upgrades at the stadium homes of the Baltimore Ravens and Orioles.

Are subsidies for glitzy private compounds and sports venues the best use of public money at this point in Baltimore’s history?

There is no better example of the misalignment of community and economic development priorities than the problem of vacant and derelict houses.

Mayor Brandon Scott’s directive that city agencies report the results of a review of their operations related to vacant housing within 30 days, which followed the tragic deaths of three firefighters, was a tacit admission that he has no plan for dealing with the problem.

Such a plan needs goals and objectives – and the means for achieving them.

It would clearly delineate responsibilities among agencies and establish a system for measuring progress and identifying glitches requiring refinements. The person charged with overseeing implementation of the plan would be able to give the mayor a progress report on a moment’s notice.

Instead, the city has a patchwork of ad-hoc programs. Some, like Vacants to Value, are demonstrably ineffective.

Other elected officials lurch from one idea to the next, the latest being the attempt by City Council President Nick Mosby to revive the “dollar house” program without sufficient planning or capital.

A root cause of the problem is the over-reliance on the views of real estate and financial interests in shaping policy.

If local planning was left up to a bunch of badminton players, badminton courts would likely sprout up all over the city.

But those interests must be harmonized within plans that emphasize the overall well-being of city residents.

There is a ray of hope for change. In announcing the merger of the GBC and the EAGB, GBC board chairman Calvin Butler cited the need to end the “siloed approach” and turf battles that have hindered economic and community development.

He described a vision of bringing together stakeholders, elected officials, religious leaders and leaders of academic and medical institutions to help “sculpt a new and aggressive mission” that provides for equitable growth in local communities and creates “a thriving environment for Baltimore’s diverse people, neighborhoods and businesses.” |

Those are lofty and encouraging words coming from the chief operating officer of Exelon. Butler now needs to convert those words into action – and politicians and other civic leaders should follow suit.