For more than three decades, John W. Anderson has remained Baltimore’s sheriff by flying under the public radar while keeping close ties to the first generation of Black politicians that rose in the wake of the William Donald Schaefer era.

Schaefer, in fact, appointed Anderson sheriff in 1989 after its previous occupant, Shelton J. Stewart, was convicted of offering a bribe to a public official. (In a classic Baltimore yarn, Stewart was caught on tape, at a McDonald’s parking lot, passing ten $100 bills to James Cabezas, chief investigator for the state prosecutor, in an attempt to quash a charge that he had stolen campaign funds.)

Anderson was elected to a full term in 1990, the first of eight stretching across 32 years. Now age 75, he’s trying to make that nine.

But as he approaches the July 19 Democratic Party primary, he faces a serious challenge by Sam Cogen, a former assistant sheriff and comparative youngster at 48.

Cogen is gaining support from a new generation of political leaders who have little in common with Anderson.

Just how little was demonstrated at the City Council budget hearing last month where Anderson, who had skipped attendance for a good dozen years, was treated to tough and persistent questioning about his office’s failure to post eviction notices on tenants’ doors, as opposed to common areas or mailboxes.

Today, nine Council members are scheduled to show up at the War Memorial Plaza to endorse Cogen’s candidacy.

They represent many different parts of the city – John Bullock and Kristerfer Burnett from the West Side, Zeke Cohen, Antonio Glover and Ryan Dorsey from the East Side, Odette Ramos and Mark Conway from Charles Village and Govans, and Yitzy Schleifer from the northwest.

Their ringleader is Eric Costello, the downtown and South Baltimore councilman, who has so far donated $6,000 in campaign cash and a former aide, Kevin Hayes, to Cogen’s cause.

According to the group’s press release, Cogen is “well prepared to transform the sheriff’s office into one that reduces violent crime, humanizes the eviction process, embraces 21st-century technology and redefines the protection of the courts.”

Were that not a tall enough order, “he will enact reforms that espouse accountability and transparency,” the release promises. 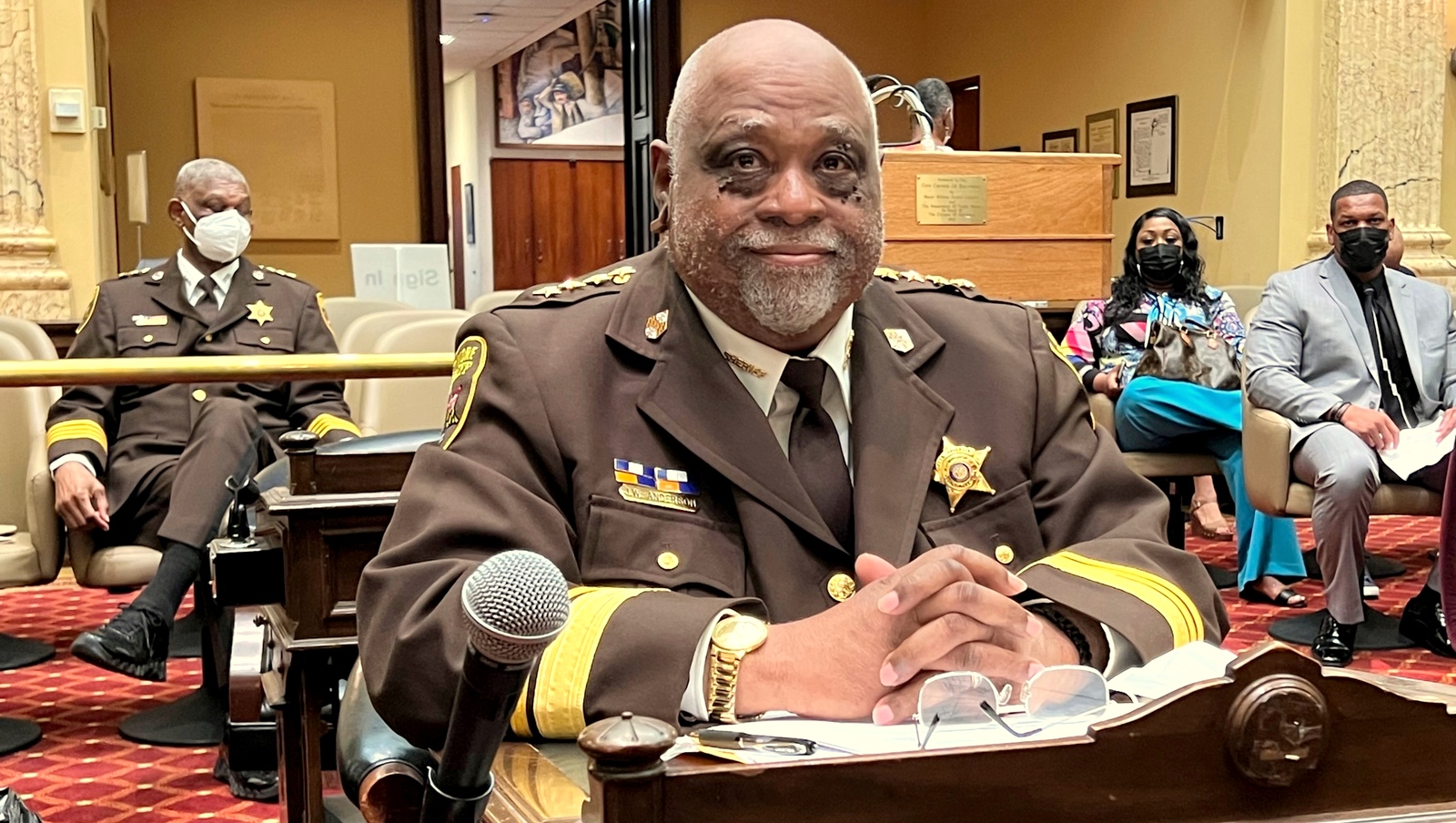 The Ravages of Time

Politically speaking, Anderson’s biggest problem is age – not just his own, but those of his peers. Briefly put, he’s running out of time.

Anderson has long followed the “machine” practice of sprinkling the sheriff’s office with family and friends. In 2000, The Baltimore Sun wrote at length about “questionable” hiring and retention practices that allowed, for example, Anderson’s wife to receive full pay while she took five months off for a back injury.

A decade later, the sheriff explained to City Paper’s Van Smith that “you develop friendships, mutual interests and trust” among the political class.

In particular, he and the city’s state senators had a long tradition of engaging in mutual endorsements during elections. “The city senators support me, and I support them, and I expect it to happen again,” Anderson said in 2010.

But, nowadays, onetime political powerhouses like Joan Carter Conway, whose daughter-in-law, Jacqueline Conway, is a sheriff captain, are out of elective office.

Which means that Anderson must rely on a dwindling set of old-fashioned machine tickets on Election Day, such as those formed by city senators.

Ahead of this year’s primary, Anderson’s name appears on a mailer, produced by the Judiciary for citywide candidates they support, that includes incumbent Register of Wills Belinda K. Conaway and her son Xavier A. Conaway, who is running for circuit court clerk.

That same year, less than 66,000 voted for Anderson or his Democratic Party rival, Stanley Brandford.

To win the 2022 race, Cogen needs to get people to pay attention to the sheriff’s office, which has an annual budget of $25 million and handles child support notifications, domestic violence summons, eviction notices and warrants in addition to protecting local courthouses.

That is what he’s doing this morning in front of City Hall.

Sheriff Anderson, meanwhile, has continued to keep a low public profile and doesn’t schedule any office appointments before 1 p.m.