The Roland Park Community Foundation (RPCF) has said a major reason it wants to remove the small roads that flank the Roland Water Tower is a strict legal obligation:

The city requires RPCF to maintain the entire area around the tower, including the roads.

But removing the roadway isn’t apparently RPCF’s decision to make.

Under the 2019 Board of Estimates agreement that granted RPCF the right to repair the tower and develop “the grounds,” the roads are specifically described as city property and not part of the grounds.

“That roadway and the City curbs and sidewalk at such roadway and at Roland Avenue are outside of the description of the Grounds and hence not part of the Grounds,” the agreement says on page 29, according to a copy reviewed by The Brew.

Another part of the Roland Water Tower Restoration and License Agreement also indicates that the RPCF is not responsible for the roadway.

It states that the Department of General Services shall “provide necessary and appropriate road maintenance and repair, including snow and ice removal as appropriate.”

“When I saw that, I said, ‘Wait a minute, their whole big thing has been it’s too expensive to maintain roads, too much to take on,’” said Betsy Heeney, a member of the Hoes Heights Action Committee that has objected to the plan to remove the road.

“Now we read this, about the city being the one to plow the snow and take care of the roads? What’s up with this?” said Heeney, speaking outside the tower today.

The City shall “provide necessary and appropriate road maintenance and repair, including snow and ice removal”  – 2019 agreement with RPCF.

Michel has not yet responded to phone calls from The Brew asking about the document, which she signed as the foundation’s president on June 12, 2019.

Councilwoman Odette Ramos says she cannot comment on the agreement until she obtains a legal review of it.

“I wasn’t here when this was done, I don’t know what the intent was,” Ramos, who was elected to the Council in 2020, said today.

From page 29 of the Roland Water Tower agreement between the city and RPCF.

Scrutiny of the document is the latest twist in a controversy that has roiled North Baltimore communities.

After a campaign to save the historic tower was completed last year, advocates turned their attention to creating a park at its base.

In addition to forcing residents to drive out of their way and undertake unsafe driving maneuvers to get in and out of their neighborhood, they say, the plan ignores the symbolic importance of this access point to Hoes Heights.

In segregated Baltimore, coming through the road and past the tower into their small, tucked-away enclave meant coming into a place of safety, say longtime residents, including direct descendants of founder Grandison Hoe. 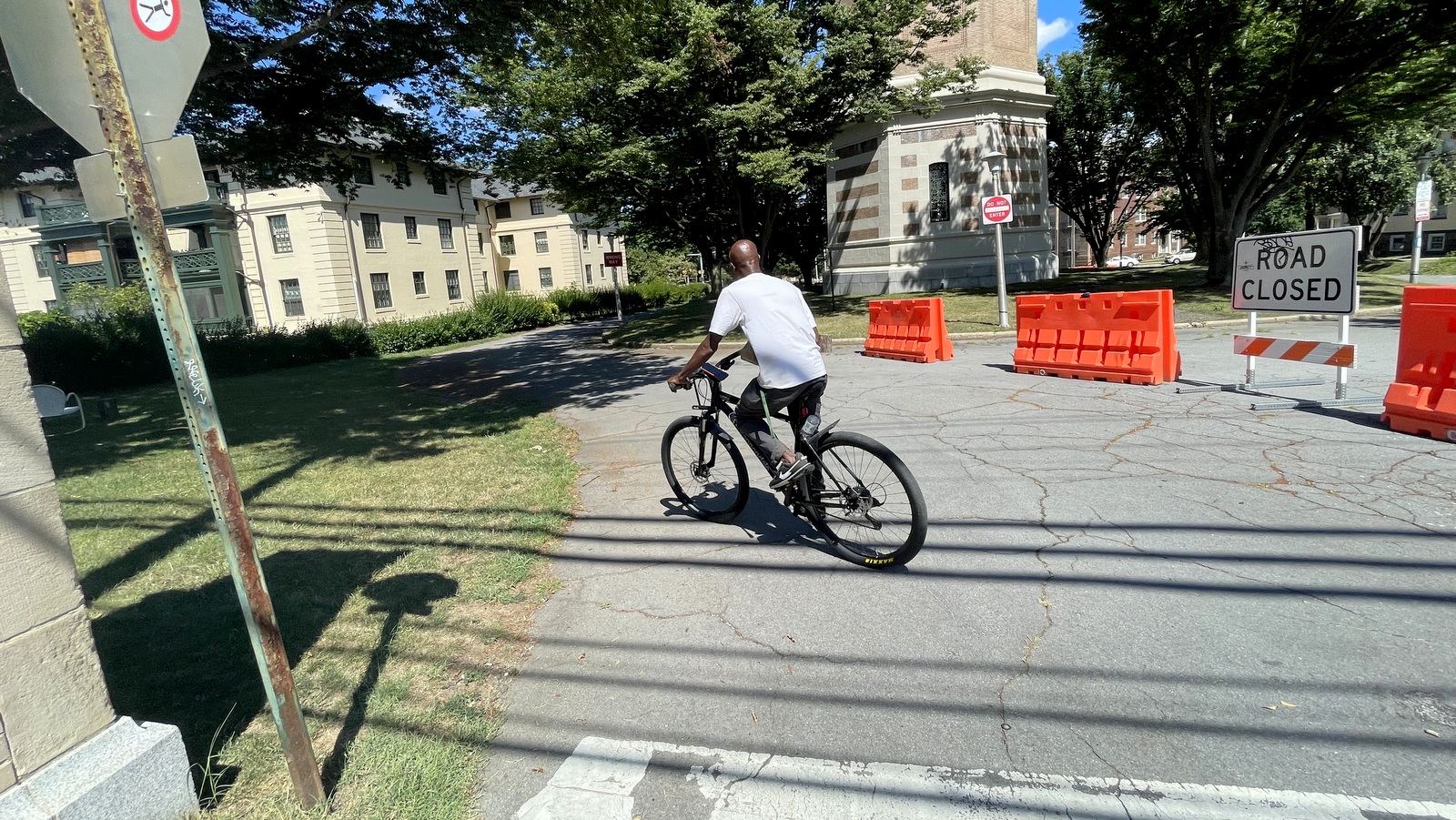 Bike rider enters the park from Evans Chapel Road. At present, cars can enter from the Roland Avenue side, but the exit roadway is blocked off. (Fern Shen)

Michel, who chaired the steering committee that chose the final park design, said the decision was made after robust community engagement that included multiple meetings, online surveys, fliers and other outreach.

The roadless park plan was developed in response to community support for more green space and community gathering areas, Michel had told The Brew.

Michel said the steering committee considered all concerns (“We wrestled with all these issues”), but “found no reasonable path forward to fund a safe, well-maintained road.”

For their part, Hoes Heights Action Committee members say their community’s perspective and pushback was ignored. They regard the steering  committee’s process as flawed.

Earlier this week, Ramos met with the Hoes Heights group, as well as residents from nearby Heathbrook, who also say they were left out of the process that ended in the final park design.

Ramos said she and 7th District Councilman James Torrence will be conducting a door-to-door survey of the neighborhood to gauge the community’s sentiment about the park plan.

“James and I will do that in the next few weeks,” Ramos said.

The survey is expected to include different park designs and information on traffic calming measures that Ramos and others have been developing.