It was nameless unsettled marsh for many years as other parts of Baltimore Town grew.

Then it was known as Fort Covington, named after General Leonard Covington who helped nearby Fort McHenry repel a British flotilla during the War of 1812.

Other subsequent uses included a brickyard and civic trash dump until the Western Maryland Railway transformed it into a busy export terminal known as Port Covington.

After the docks fell to ruin and the rails were removed, the land became the site of the Baltimore Sun’s printing plant, a Sam’s Club that closed and lots of cheap property that Under Armour founder Kevin Plank gobbled up between 2012 and 2014.

Now by decree of the New York and San Francisco developers who joined Plank and Goldman Sachs to try to revive the struggling office-retail-apartment project, this southern slice of the city’s waterfront is to be called Baltimore Peninsula.

The bland moniker, referencing a geographic feature it more or less coincides with, was announced today by MAG Partners and MacFarlane Partners, who replaced Marc Weller, Plank’s childhood friend, last May.

“Baltimore Peninsula represents a fresh model for urban development, a purpose-driven, sustainable impact community powered by diversity and committed to creating opportunities for all,” said today’s press release that unveiled the new appellation. 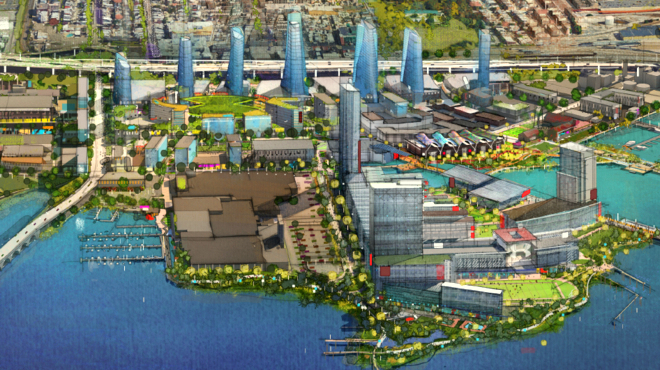 An artist rendering of “New Port Covington,” the project’s name in 2016 when Plank promised the city an array of sleek, glass-enclosed apartments along I-95 and a soaring new campus for Under Armour along the Middle Branch. (Sagamore Development)

At first, it was called “New Port Covington.” That sobriquet gave way to the much-hyped “Cyber Town USA” until the hoped-for arrival of cybersecurity companies did not materialize.

Then Plank and Weller got former Mayor Catherine Pugh to beg Jeff Bezos to turn the property into Amazon HQ2.

When that didn’t happen, the site was recast as the perfect hub for life sciences entrepreneurs and companies.

All along, claiming that Under Armour would erect a skyscraper-fringed corporate campus, Plank christened the site as “Dubai on the Patapsco.”

UA is currently building a modest headquarters building, surrounded by an athletic field and parking lots, as it prepares to leave its current HQ at Locust Point. 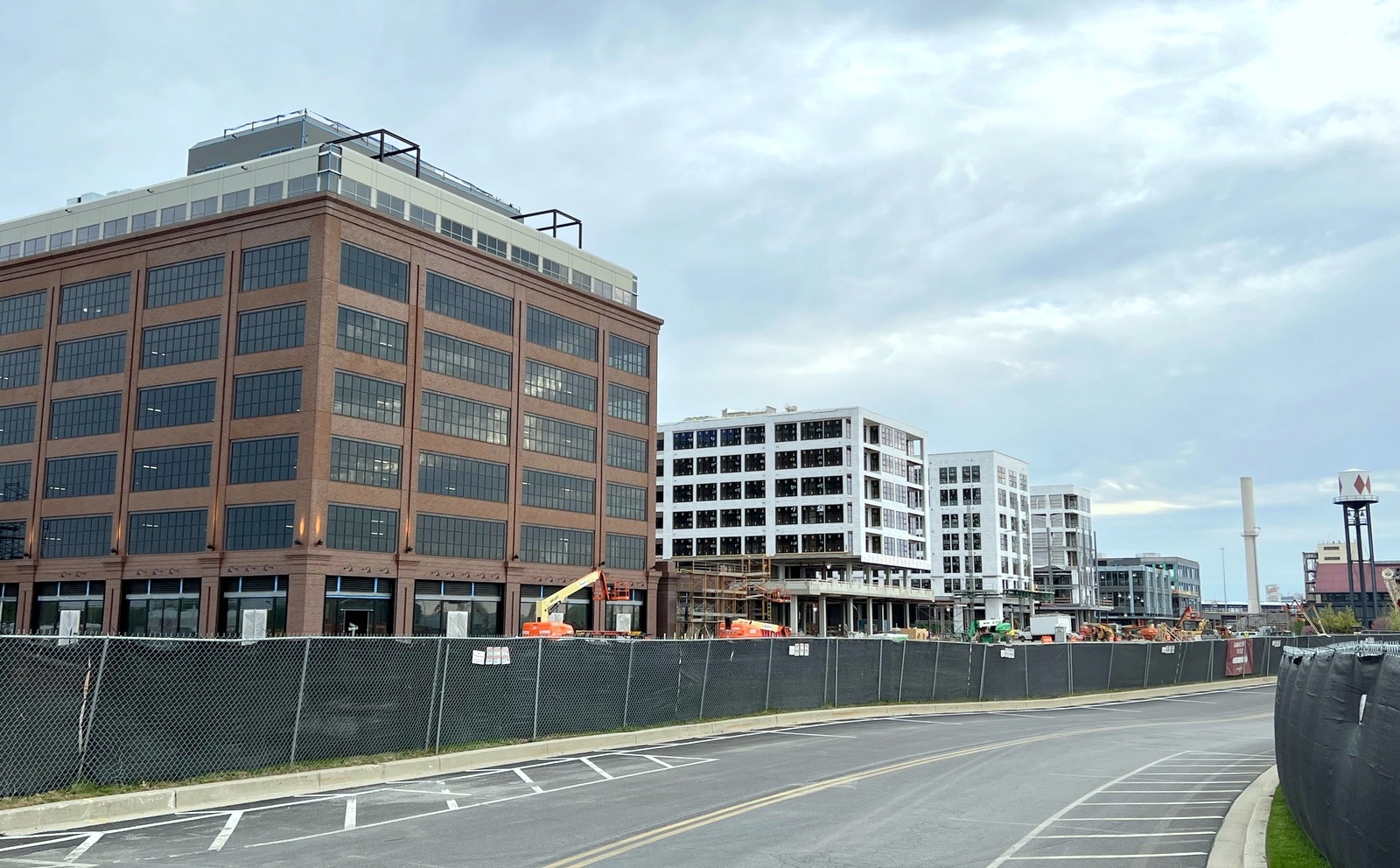 The lineup of buildings, partly underwritten by TIF infrastructure bonds, along Cromwell Street at Port Covington. (Mark Reutter, May 2022)

Five mid-level buildings are set to open next year along East Cromwell Street, and few commercial tenants have so far signed up to occupy them.

The biggest prospect is CFG Bank, which pledged in September to occupy 100,000 of the 440,000 square feet of office space coming online. That deal, however, has not been finalized, leaving today’s press release boasting about its only signed tenant.

That’s the H. Chambers Company, an architecture and interior design firm, which will occupy 9,000 square feet of the Rye Street Market under a 10-year lease. The firm plans to relocate next March from its present quarters at Montgomery Park in southwest Baltimore. 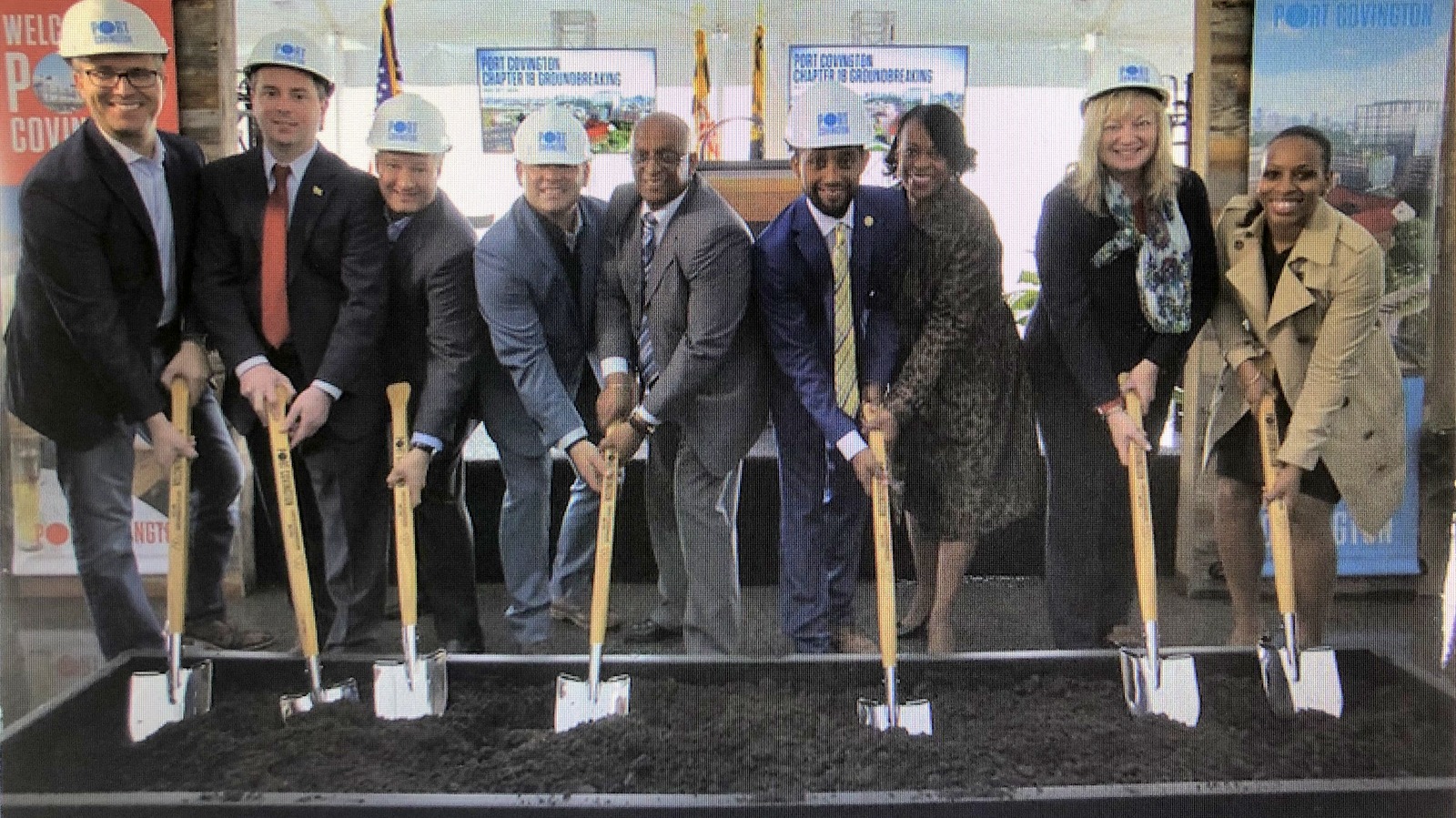 In a largely symbolic ceremony in 2019, then-Councilman Brandon Scott stands next to the Mayor Jack Young. On Young’s other side is Marc Weller, then Port Covington’s developer. (Brew file photo)

Tonight, the rebranding announcement will be feted at an invitation-only party for political, business and community leaders at the Rye Street Tavern, a whiskey bar owned by Plank.

Expect plenty of celebratory words from Mayor Brandon Scott. He was quoted in today’s press release as saying:

“The announcement [of a new name] is in alignment with our shared vision for Baltimore’s renaissance – a renaissance driven by inclusive economic growth that creates diverse and thriving communities that bridge historically neglected area of our city.”

Mayor Scott will celebrate the rebranding at a Plank-sponsored party tonight.

Scott originally backed the plan and its $660 million in TIF benefits as a councilman from the Eastside’s impoverished 2nd District.

In 2020, as City Council president, he approved a $148 million tranche of TIF bonds, which financed the cost of engineering, design and construction of new streets, sewers, sidewalks and other infrastructure along Cromwell Street.

Now as the controlling member of the Board of Estimates, he has final say over future public subsidies for the project.

Also quoted today was Plank, the success of whose private company, Sagamore Ventures, may rest on the promotional value of “Baltimore Peninsula.”

Said Plank: “Baltimore is an incredibly special place to me – it is home – and it is rewarding to see the culmination of all the great work that has been done to date,” adding that city residents “will continue to benefit from the momentum and energy that has resulted from the creation of this new waterfront neighborhood.”

• THE BREW’S DETAILED COVERAGE OF PORT COVINGTON SINCE 2016: here and here. 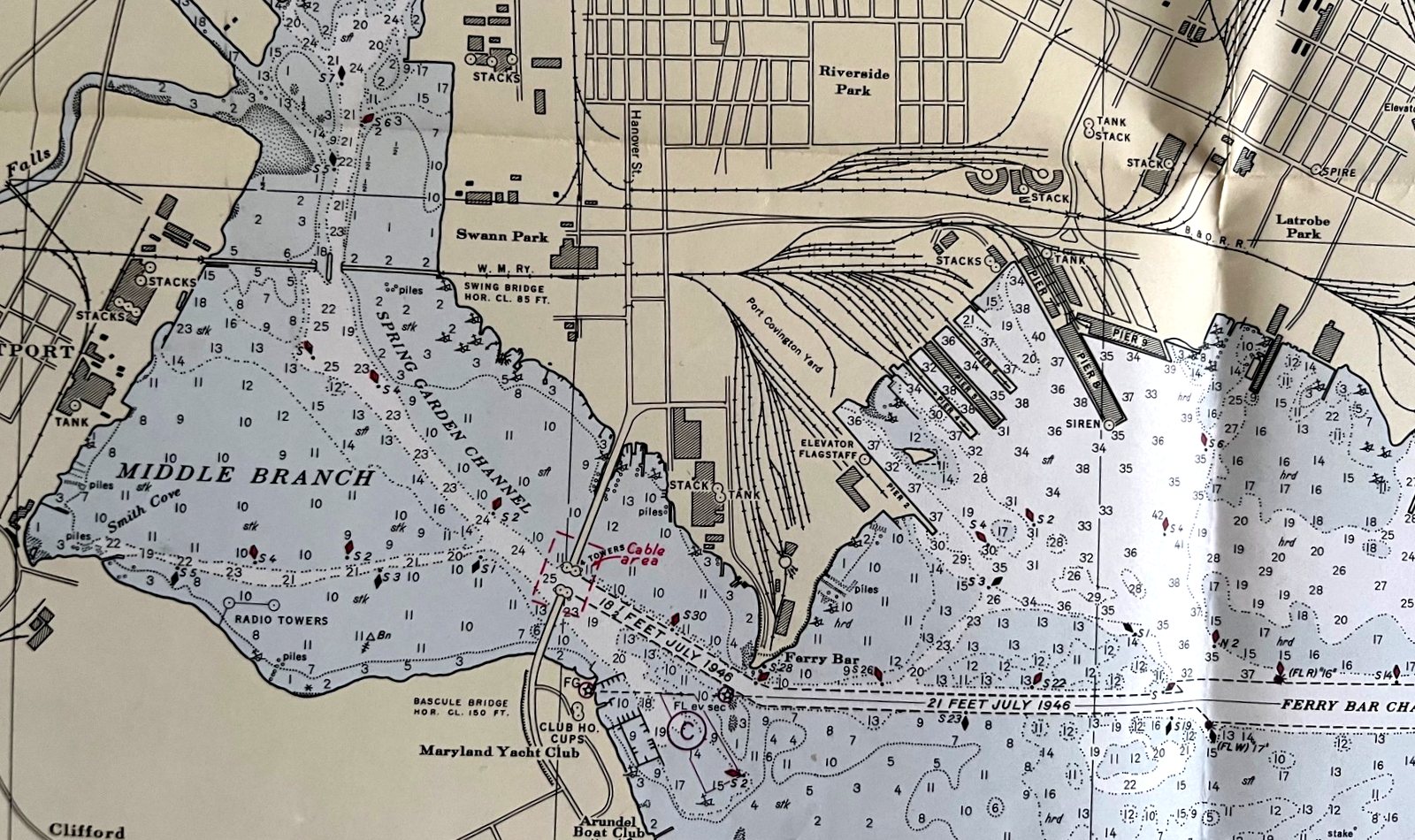 Port Covington in its 1949 heyday as the deep-water export terminal of the Western Maryland Railway. (U.S. Coast and Geodetic Survey)