One more piece of Baltimore’s unique old architecture about to be clawed into rubble.

One more “dead zone” – and likely future parking lot – about to blight an intact block of historic Mount Vernon.

One more set of rowhouses – where families once lived and thrived – soon to vanish.

That’s how opponents view plans by the Greek Orthodox Cathedral of the Annunciation to demolish a group of 1890s-era rowhouses at 35, 37, 39, 41 and 43 West Preston Street.

The four-story structures, vacant for many years, stand across the street from the church, which acquired them in the mid 1990s and early 2000s. Now, church leaders say, the buildings are too dilapidated to save, costly to maintain and pose a safety risk.

That argument infuriates Jack Danna and other mid-town residents who gathered in front of the tan-brick structures last week.

“If they’re deteriorated, you allowed that to happen,” exclaimed Danna, president of the Mount Vernon-Belvedere Association (MVBA), which opposes the demolition.

“If you buy a property, especially in a city historic district, you have a responsibility to maintain it. And if you can’t, then sell it to somebody who can,” Danna continued.

“If you buy a property, you have a responsibility to maintain it. And if you can’t, then sell it”  – Jack Danna of Mount Vernon-Belvedere Association.

William P. Prevas, whose family has a long history of leadership in the parish, sees it differently.

“They were in bad shape when we got them,” said Prevas, a physician who lives in Lutherville, speaking outside the church yesterday ahead of Sunday services. “There was some concern at the time of those buildings becoming ‘a house of ill repute.’”

Prevas noted that two of the properties being targeted for demolition were donated to the church in the 1990s by lawyer and Orioles owner Peter Angelos, one of the church’s many prominent parishioners.

Others in the congregation include judges, lawyers and members of the Smith family, owners of the Atlas Restaurant Group.

Another prominent clan is the Paterakis family, developers of Harbor East, who, according to Prevas, contributed significantly to the purchase and stabilization of the structure at the east end of the block, the parish’s Preston Hall event space.

“People should be grateful for all the investment we put into this block,” Prevas argued. 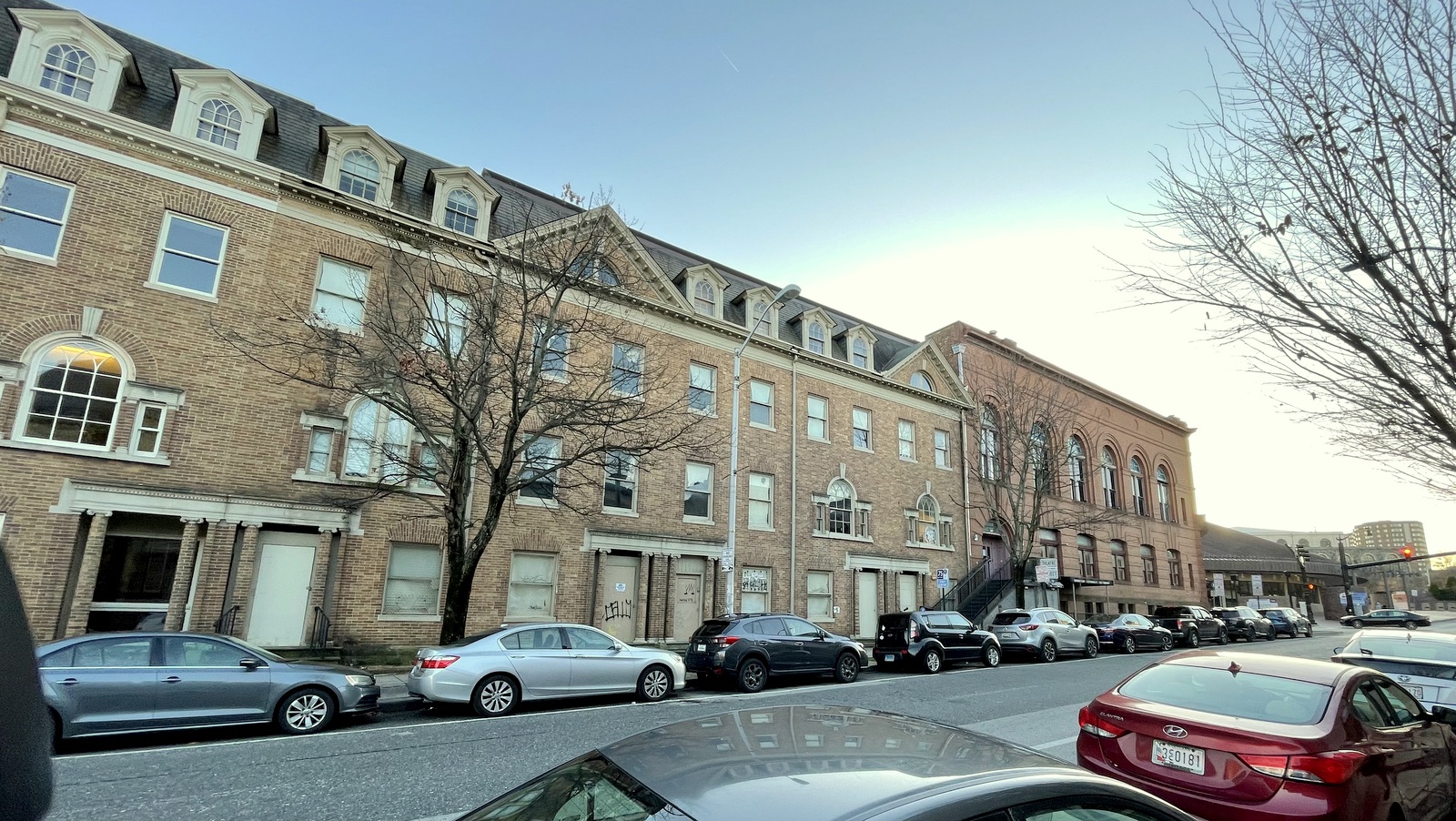 The buildings at 35-43 West Preston Street that the Greek Orthodox Cathedral of the Annunciation wants to demolish. At the end of the block is the Theater Project and, across Cathedral Street, the Meyerhoff Symphony Hall. (Fern Shen)

It was only last month that the general public became aware of what church leaders plan for this property if given permission to clear it:

“A prayer garden and other hardscape improvements for faith-based gatherings and other functions. . . in furtherance of the Church’s religious mission,” wrote its lobbyist, Caroline Hecker, in a letter to the city’s Commission for Historical and Architectural Preservation (CHAP).

That proposal raises the hackles of many area residents who say “hardscape improvements” means, basically, a parking lot.

“The last thing we need is more parking lots here, especially for people who don’t even live here,” said longtime Mount Vernon resident Lyle Nash, noting that the church’s congregation resides almost entirely outside of the city in the suburbs.

“The last thing we need is more parking lots here, especially for people who don’t even live in the neighborhood”  – Mount Vernon resident Lyle Nash.

“The majority of them don’t know anything about the neighborhood – they come on Sunday and leave,” added George Bourozikas, who has been a member of the congregation. “This is not malice perhaps but, more, complete ignorance.”

For many, the church’s proposal resurrects painful memories of the destruction of the 100-year-old Rochambeau building on Charles Street in 2006 – also to make way for “a prayer garden.”

Preservationists and community members fought that one too, and lost. But the Archdiocese of Baltimore, with the backing of the Downtown Partnership and other powerful groups, prevailed.

Today, many in Mount Vernon complain, the gate to the prayer garden at the corner of Charles and West Franklin streets is often locked. 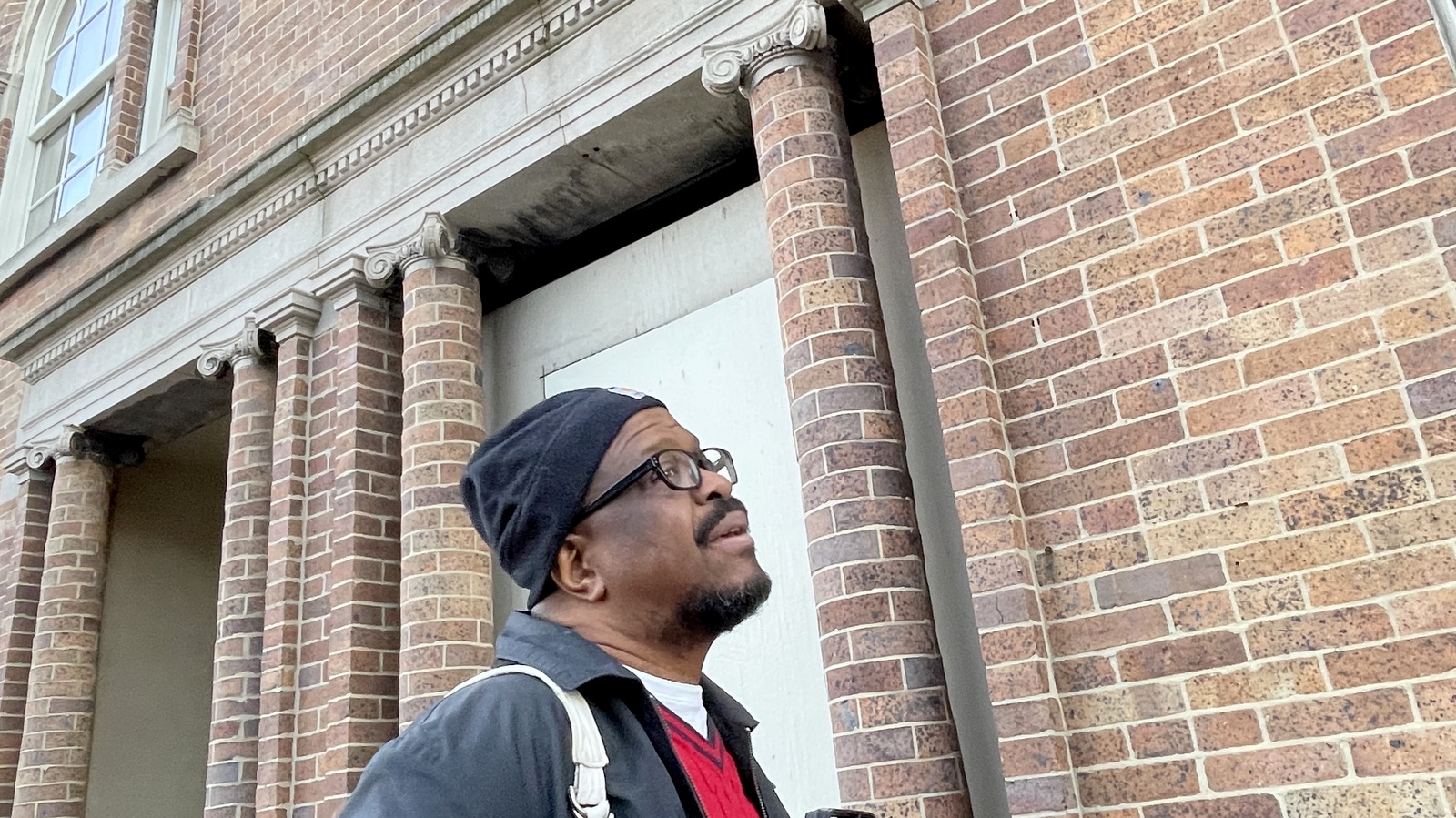 Tomorrow, an army of opponents is geared up to do battle again, going before CHAP at 1:30 p.m. to argue that the buildings contribute to the character of the Mount Vernon Historic District and should not be demolished.

[CHAP officials say the staff will also report its finding: that the buildings “contribute” to the District’s historic character, one of the criteria commission members consider when weighing a demolition request.]

Danna, of the MVBA, and leaders of the Mount Vernon Place Conservancy, reportedly plan to be there, as do Charlie Duff of Jubilee Baltimore and Johns Hopkins of Baltimore Heritage, which has urged the public to “add your voice to save the Preston Street rowhouses.”

“If you look closely at them,” his post says, “you’ll notice a few unusual and wonderful things.”

“The federal design by architect John Appleton Wilson is distinctive in its use of palladian windows, elegant brickwork and ionic columns at the entrance of each,” it notes. “This design, intact across a full block, cannot be found anywhere else in Baltimore.”

“This design, intact across a full block, cannot be found anywhere else in Baltimore” – Baltimore Heritage.

“Removal of the center buildings from the block would be a shocking loss of architectural balance and of a harmonious design across an entire block face,” the post continues.

To Danna, that disruption would weaken not only the historic district’s architecture, but the vibrancy and walkability of one of the city’s most attractive and diverse neighborhoods.

“It would be a heartbreaking loss.”

Church officials, meanwhile, point to the condition of the buildings, whose front facades, though graffiti marred, are intact but whose rear portions are severely dilapidated.

Weeds and vines twine around the cracked and crumbling brick and knocked-out windows. A mature tree grows up through one of the buildings.

The Parish Council makes the case for demolition in an email to the church community:

“The Cathedral, being a responsible steward in the operation and maintenance of its facilities, has invested at least $90,000 to repair and preserve the properties. Despite these efforts, they have continued to deteriorate to a point where they have lost their structural integrity, cannot be preserved, and do not serve the Cathedral’s religious mission; nor is it economically feasible to salvage and restore them to a usable state. A recent report from a licensed structural engineer confirms that the structures are damaged beyond reasonable repair and should be demolished.” 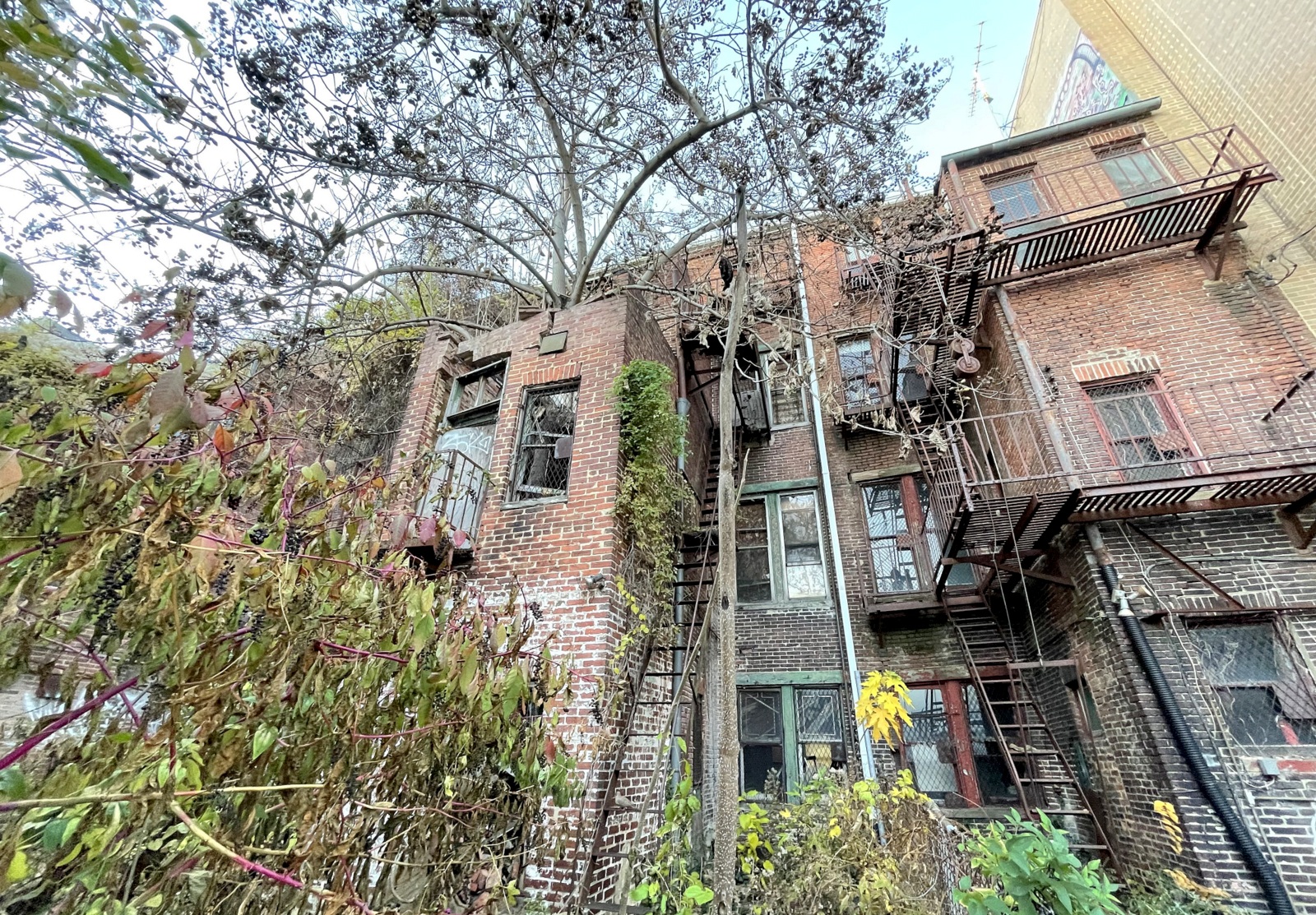 Rear view of the Preston Street houses targeted for demolition, including one with a tree growing up through it. (Fern Shen)

Demolition opponents, meanwhile, argue that the houses especially in the front, are in good shape.

“I don’t see step-cracking at the joints, I don’t see bowing at the stone front or cracked lintels,”architect Jerome Gray said, running his hand gently over the brick surface.

As for the rear area, Danna said there are a plethora of developers who would be willing and able to stabilize the buildings and restore them as apartments or some other use.

“Look at the work ReBUILD Metro is doing bringing shell houses back to life in Johnston Square – there’s no reason a developer like Chasen and Zahlco couldn’t bring these buildings back to life,” said Mount Vernon resident Christopher Hyde.

“Sell them to me, I’ll bring them back,” Hyde quipped. “This isn’t rocket science.” 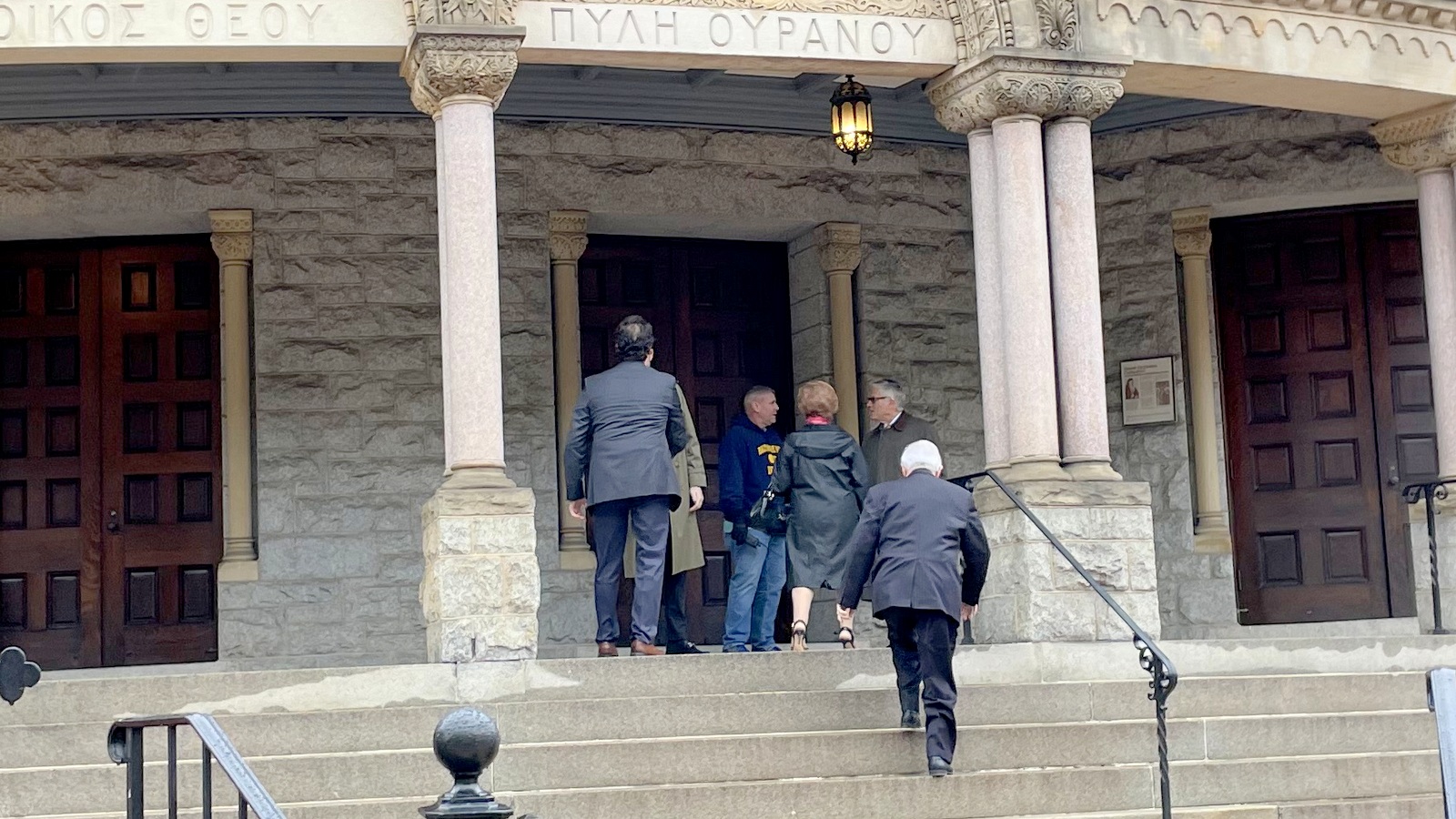 People entering the Greek Orthodox Cathedral of the Annunciation are greeted yesterday by the off-duty Baltimore police officer who is posted at the door for Sunday services. (Fern Shen)

Scott Called on to Act

One churchgoer yesterday, who didn’t want to be identified by name, said replacing the buildings with parking spaces would be good not just for the congregation but for others in the neighborhood.

“People are always circling the block looking for a spot – this would help restaurants and everybody,” said the woman, who had just come from the church’s parking lot at the corner of West Preston Street and Maryland Avenue.

Another person said, “Nobody likes to see them demolished,” but added “I actually think all the controversy is a good thing.”

“Maybe it will mean someone comes in like an angel and buys them,” he said.

“If I were mayor, I’d be kicking and screaming”  – Jack Danna.

Danna called on Mayor Brandon Scott to get involved in the contentious issue.

“If I were mayor, I’d be kicking and screaming and wanting to give CHAP the authority to prevent this,” he said.

“I like Brandon. He did what was right in Poppleton – he could be helpful in the same way here.”