School bells rang out on a recent morning at Grove Park Elementary, a poignant sound since the building has been closed the last two years and no one was inside.

It’s just something that residents of this tidy Northwest Baltimore community put up with, Steve Ward, vice president of the Grove Park Improvement Association, explained.

To Ward, it’s oddly fitting that the building, with its brightly colored facade and playground out back, still has a schoolhouse vibe.

He and other residents would love to put the classrooms and gym/auditorium back to use in the building, a safe space where residents have long gathered for community meetings, school events and election-day voting.

But against the wishes of many in the community, city officials have decided to sell the decommissioned school to Ohio-based CommuniCare, which plans to demolish it and construct a 145-bed skilled nursing and long-term care facility.

“We have been very clear that we don’t want it. But we are being ignored,” said Ward, standing by the 5545 Kennison Avenue building with three other area residents who feel the same way.

They and other neighborhood leaders who spoke with The Brew say replacing Grove Park Elementary/Middle with a busy nursing home and rehab facility would bring traffic and noise with it, undermining the stability of a proud, cohesive Black neighborhood.

“I feel it would really change the community,” said Alan Bull, who has lived there for 40 years.

“It’s quiet. It’s residential. It has a really rich heritage,” Bull said, noting that civil rights trailblazer Dr. Helena Hicks is among the figures who live there.

Chris Hamm, who moved to the neighborhood three decades ago to raise his family and still likes to walk his dog up and down the streets, called Grove Park a hidden gem.

Community leaders have been rallying to push back against the CommuniCare proposal.

Ward says nearly 100 people have signed a petition asking the city to halt the project. He has filed a complaint with the Baltimore Board of Ethics regarding the conduct of 5th District Councilman, Isaac “Yitzy” Schleifer,

Grove Park resident Terrence Thrweatt, who has been peppering officials with emails and public information requests, says he lost faith in Schleifer over the issue.

“I mean, I knocked on doors for him at one time,” Thrweatt said. “This is so disappointing.” 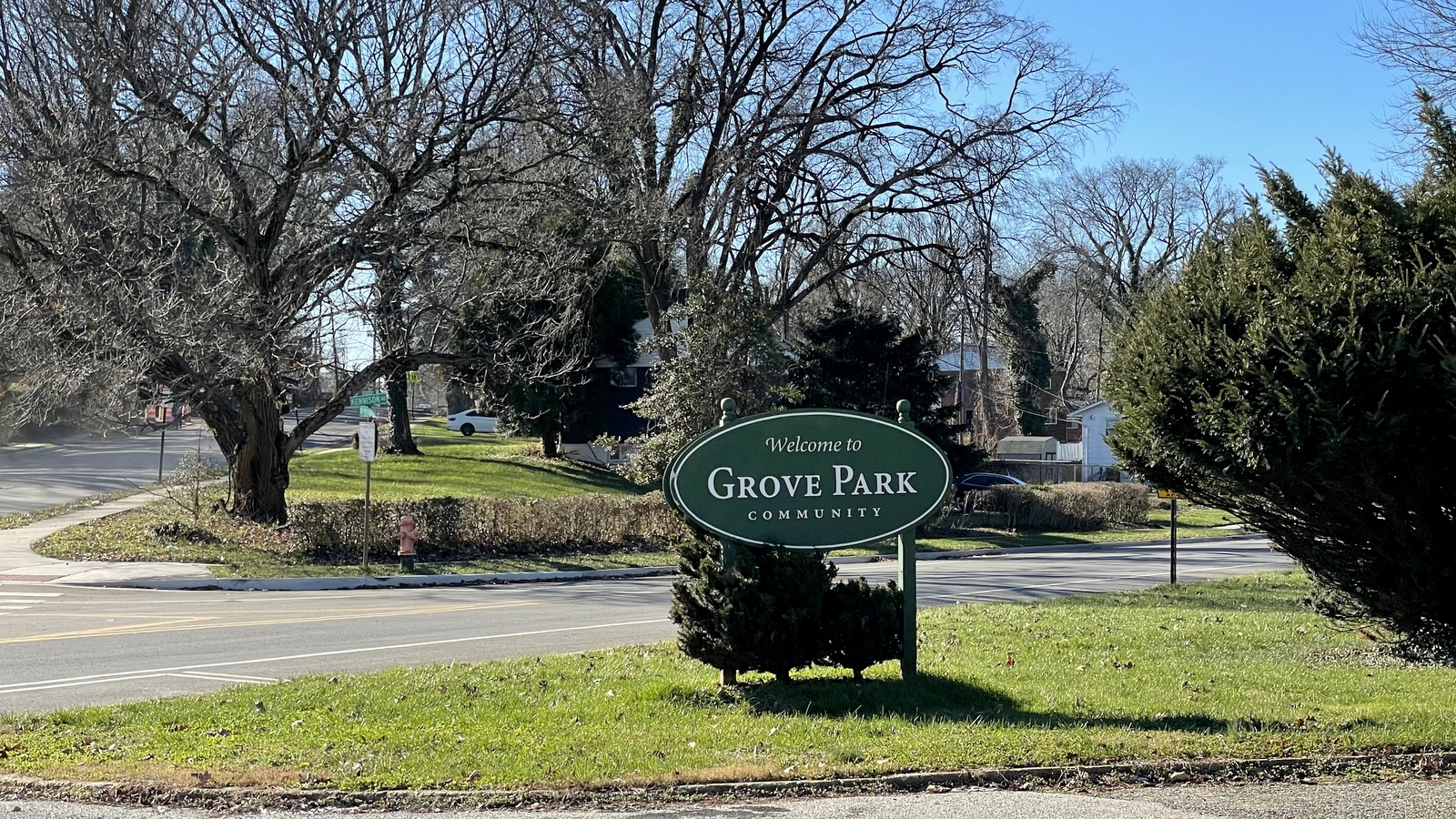 Community sign at the intersection of Rogers and Kennison avenues. Off to the right is the Arlington Cemetery of Chizuk Amuno. (Fern Shen)

Other parties, responding to an RFP, had expressed interest in the school property – among them a local church proposing a multi-purpose center and an area businessman who wanted to set up a private elementary school focusing on economics and financial literacy, a project that the community association favored.

But the Department of Housing and Community Development (DHCD) chose CommuniCare, and neighborhood leaders who oppose the decision say they are getting no support from their city councilman.

Schliefer says the city has acted properly, noting in a written statement that “the Grove Park property went through an extensive process created by the housing department [that] included meetings with the community, a survey and a public process where all applicants presented publicly and were graded by a panel.”

“It seems like we don’t have any of the pull of this Ohio company”  – Grove Park Improvement Association Vice President Steve Ward.

Some community leaders assert the very opposite, saying political donations from CommuniCare to Schleifer and other elected officials are dictating what happens behind the scenes.

“It seems like we don’t have any of the pull of this Ohio company,” Ward said with a grimace, while Karen M. Braden, president of the Grove Park Improvement Association, puts it even more bluntly.

“Pockets are being greased by this,” Braden told The Brew. 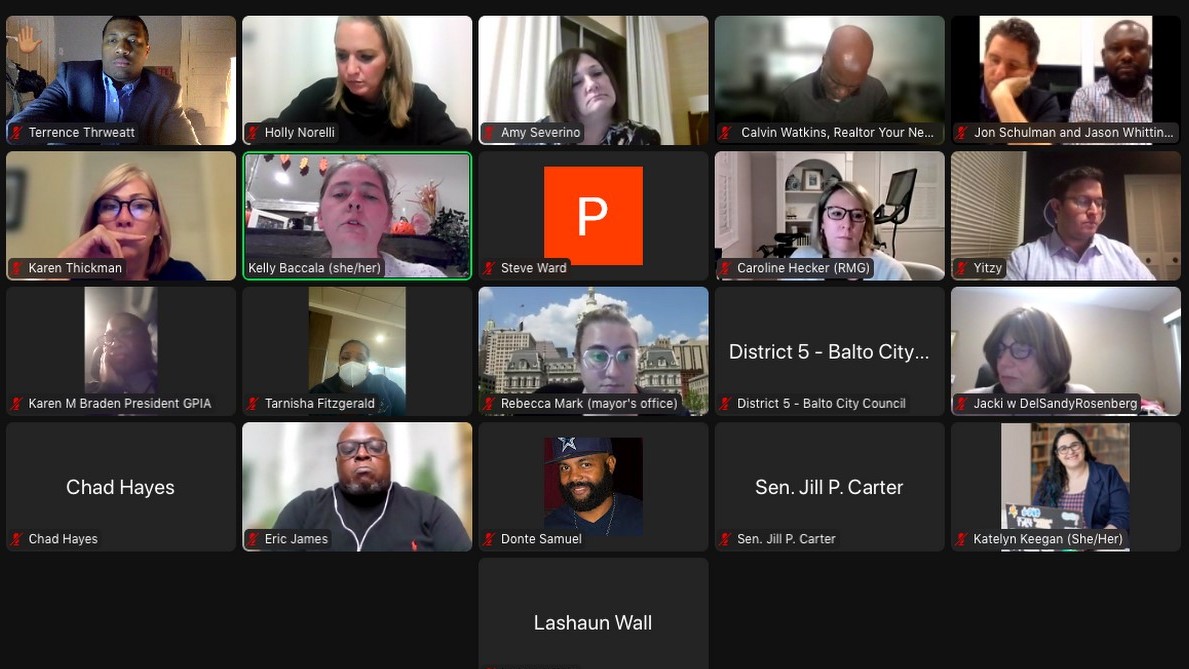 The controversy is the latest to flare in a part of Baltimore that often complains of being left out by City Hall.

In 2016, for example, Northwest Baltimore residents said the surge in basement sewage back-ups they’d been reporting was being ignored.

The city eventually acknowledged that the closing off of sewage overflow pipes – in order to comply with a federal consent decree – was causing human waste to overflow into homes in Grove Park, Glen, West Arlington, Forest Park and Howard Park.

That same year, residents were upset to learn that City Schools had decided to shutter Grove Park Elementary/Middle.

School officials said that only 282 students were enrolled at Grove Park, a number they called “unsustainably small.”

The school was to set to close in 2018, with students re-assigned to Calvin M. Rodwell Elementary/Middle on Liberty Heights Avenue.

A brief reprieve kept Grove Park open in 2019 so that Calvin Rodwell students could be sent there while their school building was replaced with a new structure.

In January 2020, the Calvin Rodwell school reopened, and Grove Park’s doors closed. Like other public schools deemed “surplus,” the building’s ownership was transferred to the city.

An RFP to purchase and develop the property drew submissions from four local prospective buyers and one from CommuniCare, a family-owned company in Cincinnati that has 19 locations in Maryland, including three in Baltimore. 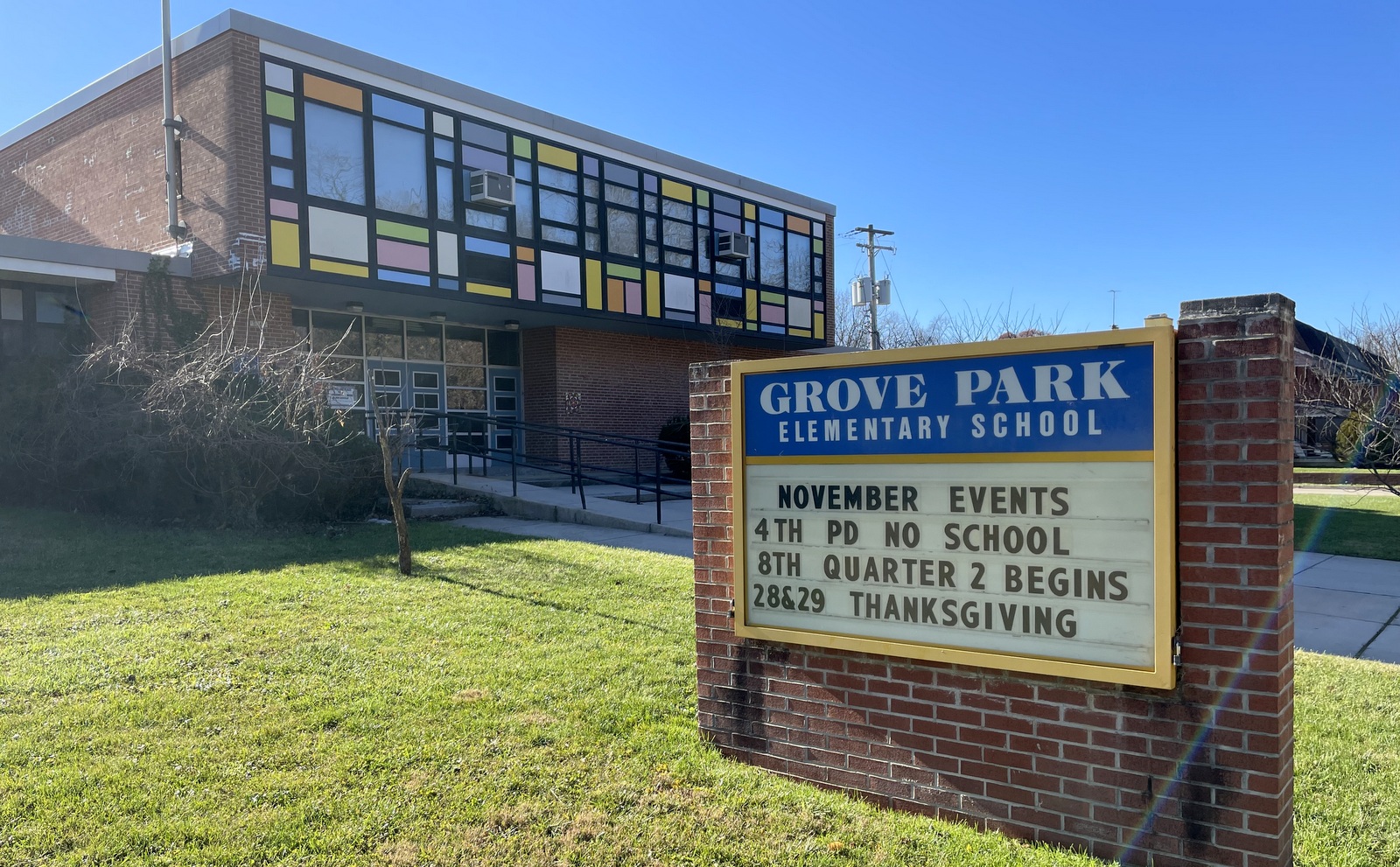 The closed Grove Park school still features information about events that happened in 2019. CommuniCare wants to tear down the building and erect a 145-bed long-term care center. (Fern Shen)

“We were done dirty”

Braden said the community was “horrified” to find out CommuniCare was selected “after being, we thought, very clear that we don’t want them.”

Housing department spokeswoman Tammy Hawley said submissions were reviewed by a panel that included a person from the Maryland Department of Housing and Community Development and representatives from the Comptroller’s office, Planning Department, Department of General Services and DHCD’s development division.

Submissions were scored by the panel, and a recommendation advanced to Housing Commissioner Alice Kennedy.

Hawley said scoring was based on “the quality of the development concept, project feasibility, developer capacity and experience, benefits to the city, to the community and economic and community inclusion, and financial wherewithal.”

Ward said that Schleifer and DHCD kept the community in the dark about the building for months.

Braden said the councilman dismissed her objections, and that the process was marred by irregularities, including DHCD’s last-minute cancellation of a Zoom meeting about the proposal due to “technical difficulties.”

“We were done dirty,” she said. “I didn’t know anything about CommuniCare being awarded this until after it had already happened.” 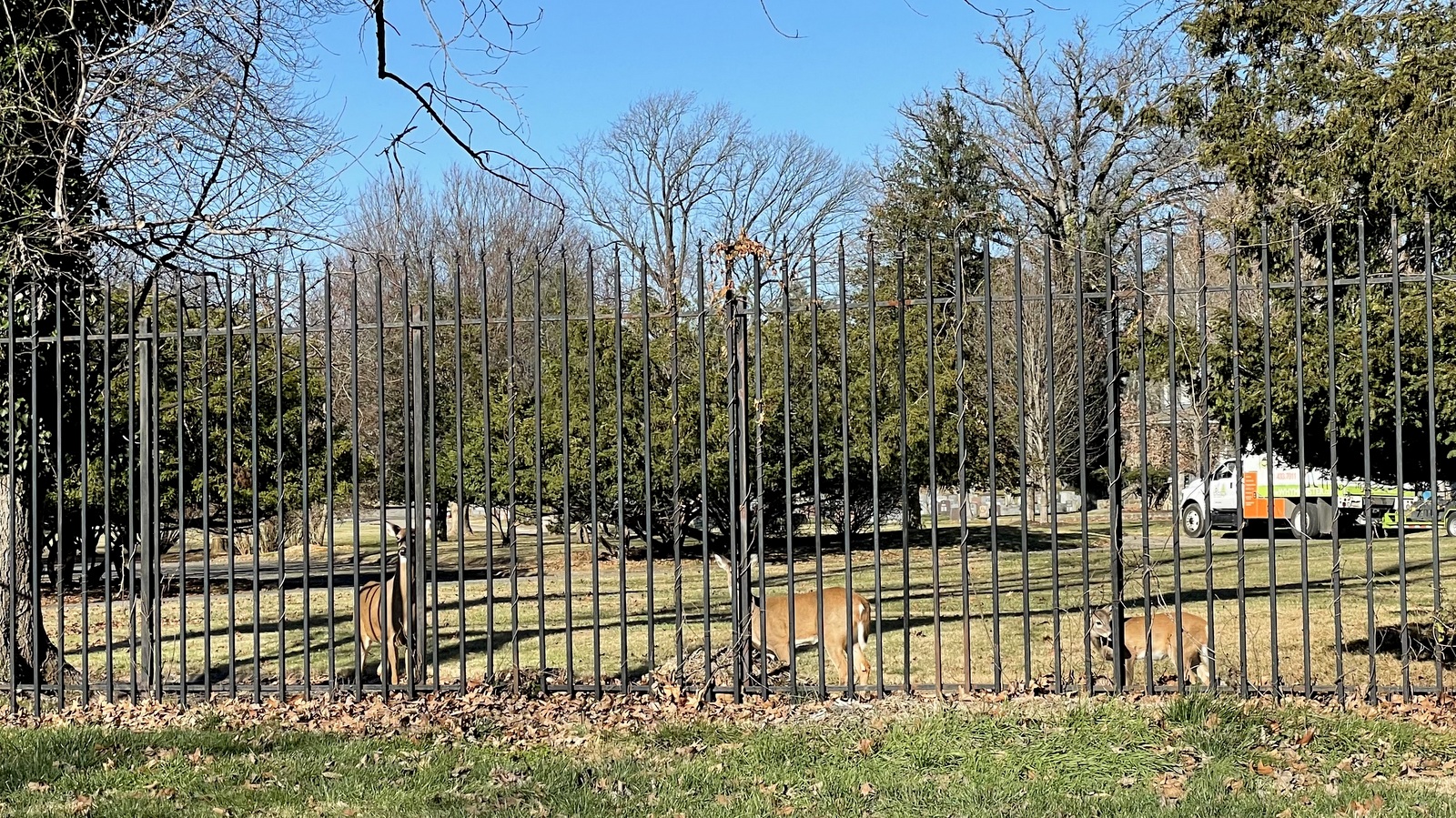 Deer graze at the Arlington Cemetery of Chizuk Amuno located across the street from the school. Not visible: two hawks swooping in the air above the deer. (Fern Shen)

The nursing home company says Grove Park will benefit from the state-of-the-art facility they plan.

“CommuniCare aims to achieve a high-quality development that complements neighboring homes, existing assets and enhances the surrounding community through a significant investment of resources,” according to a statement provided to The Brew.

A pending City Council bill formalizes the Scott administration’s decision to offer the property for sale. (A DHCD memo on file with Bill 22-0270 notes the RFP has been awarded to CommuniCare.)

While housing officials say the sale has not been completed, CommuniCare says it has been “collaborating closely with local partners across the city, including Council members and elected officials, to address key questions including construction, parking, traffic, environmental concerns and neighborhood beautification.”

In addition to job opportunities, CommuniCare promises community access to “onsite spaces” as well as internships.

Ward and Braden say that low-paying jobs and the occasional use of a meeting room do not outweigh the sale’s potential damage to the community.

Braden said she has implored Schleifer to use his influence to stop the transaction, but he has not listened.

“I said to him, ‘We’re not like [Baltimore County’s busy] Joppa Road. We don’t want to be commercialized. Why are you trying to kill our neighborhood?’” she said. 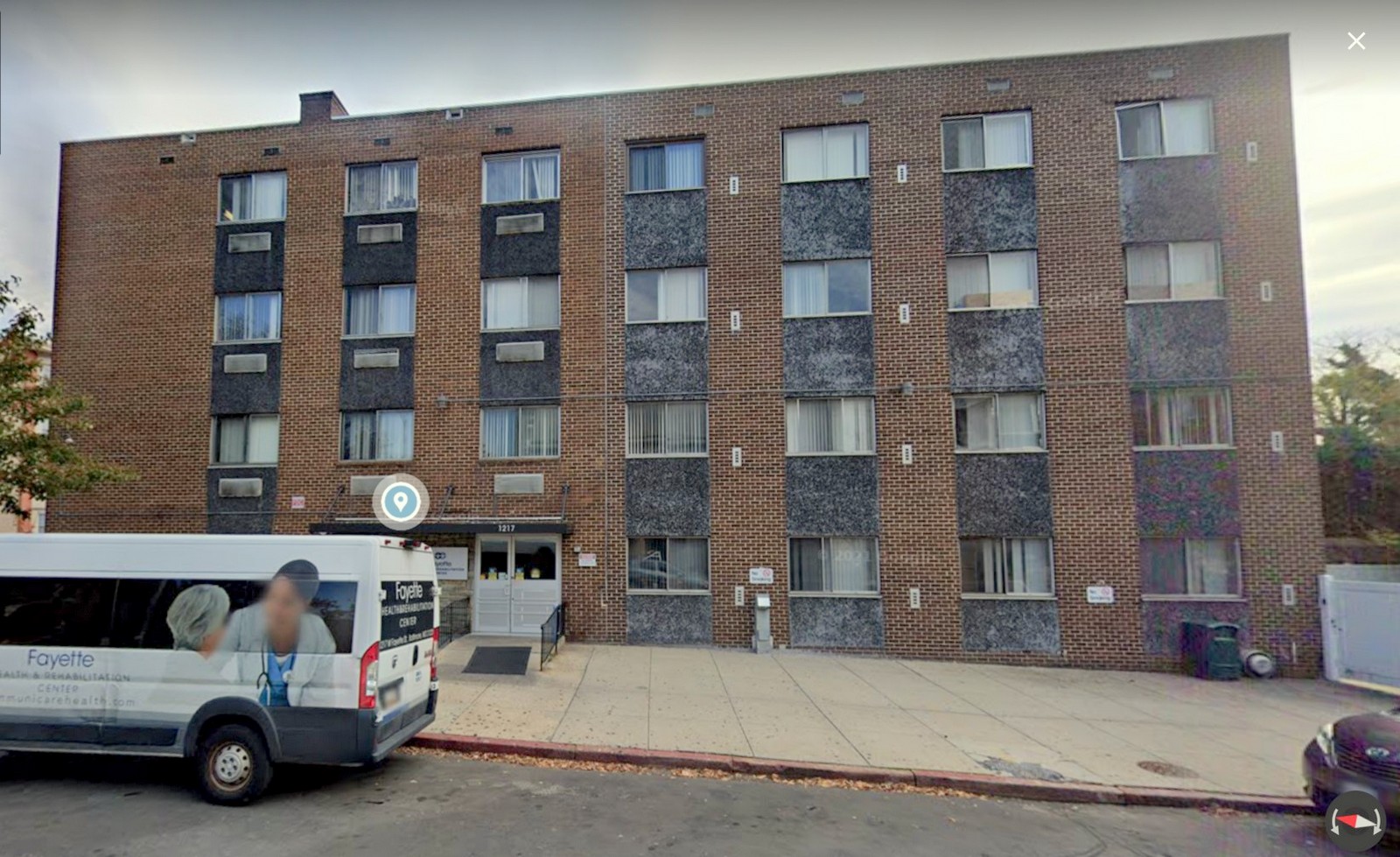 One of CommuniCare’s locations in Baltimore, the Fayette Health and Rehabilitation Center at 1217 West Fayette Street. (Google Streetview)

Speaking with The Brew, Schleifer pointed to his history of calling for an open process for the sale of school properties and his past criticism of the sale of the Langston Hughes Elementary School to a community activist in 2020.

He noted that he fought the closing of the Grove Park school and also requested that it remain a polling station.

Schleifer said his position is a response to his constituents’ desire “that this property not go unoccupied and abandoned like other vacant school properties.”

While some oppose the idea of building a nursing facility on the Kennison Avenue site, he said other residents support the plan.

The community doesn’t want “this property to go unoccupied and abandoned like other vacant school properties”  – Councilman Yitzy Schleifer.

Promising to “continue to relay the feedback” he receives to DHCD, Schleifer said he is “in constant contact with the president of the Grove Park Association and will continue to work with her to improve the Grove Park community.”

Schleifer did not directly name Calvin Watkins, whose bid to acquire the property for the Business & Economics Academy of Maryland (BEAM) was rejected.

But he noted that one of the failed applicants “is now asking for a redo.”

“I was not on the panel, nor privy to the finances or internal plan documents he provided,” Schleifer said.

As Braden sees it, even if Schleifer had concerns about BEAM or the other proposals, it was not a valid reason to green-light a deeply unpopular nursing home coming into the community.

“We are willing to work with BEAM if he needs grants, if he needs state or federal funding. Why not make what the community wants work?” Braden asked.

The Grove Park Association has also looked favorably on another rejected bidder, Concord Baptist Church on Liberty Heights Avenue, and suggested the church could potentially join forces with BEAM to strengthen its proposal.

“The building is still in good shape,” Ward maintains. “Yes, there has been vandalism, but I think it is structurally sound.”

Braden agreed, calling on Mayor Brandon Scott to slow down the process. “Why not delay the sale to CommuniCare until we get it right?”