A dozen hard boiled eggs, yolks extracted
Mayo (generously mixed in)
Mustard (only a little)
Salt & pepper
a splash of Worcestershire sauce
Add all ingredients above into bowl & hand mix or use hand blender
Refill egg cavities with yolk mix
Dust finished eggs with paprika
Slice pimento-stuffed green olives and place a piece so the red center of the green olive is in the center of each deviled egg.

Hard boil eggs, peel shells, and slice in half lengthwise. Scoop out yolks, mix with all ingredients, and refill egg cavities. Sprinkle with Old Bay.

Ovoids date back to the time of Ovid

Like many Baltimoreans, Toni Clark assumed the once ubiquitous deviled egg was red, white and blue through and through.

“It’s really an American dish,” said Clark, who has no memories of her mother ever making deviled eggs amidst the mountain of pasta that came out of the basement kitchen of the Adornato house at 638 South Newkirk Street.

The scholarship of Mark Sohn supports the idea of deviled eggs as a piece of Americana. A professor of Appalachian studies at Pikeville College in Kentucky, Sohn has documented the place of honor they hold in the hilly parts of the eastern seaboard.

“No mountain dinner is complete without deviled eggs,” writes Sohn, in “Appalachian Home Cooking,” published in 2005 by the University Press of Kentucky.

The egg yolks are sometimes mixed with crushed bacon or pickle relish down South, and the mayonnaise of choice is Duke’s.

But like so much of what we think of as American – pizza, for instance – the deviled egg landed here from foreign shores, its appearance preceding not just the United States, but the discovery of the New World. It harkens back to ancient Rome.

In elite circles of the Empire (according to “Cooking and Dining in Imperial Rome,” edited by J. Dommers Vehling) “boiled eggs [were] seasoned with broth, oil, pure wine, or are served with broth, pepper” and an onion/garlic substitute called silphium.

The earliest recipes for the dish moderns would recognize as a forerunner of the deviled egg appeared in medieval Europe. These eggs were stuffed with cheese, sweet spices, sauces made from pine nuts and raisins.

By the 16th century, enter the devil. It was then common for cooks to remove the yolk of a hard-boiled egg and mix them with hot stuff like mustard and cayenne before refilling the egg. Some recipes called for eggs to be boiled not hard, but medium and filled with not only pine nuts but honey, vinegar, pepper and something called “lovage.” (I’m Lovagin’ it!)

Baltimore poet MiMi Zannino knew she was grown up when she began making deviled eggs without supervision, which she could do “by the time I was a teenager.” True adulthood arrived when she was designated “official deviled egg” contributor to Zannino family gatherings.

“My latest spin-off of Mom’s recipe is to fold Maryland crab meat into the yolk,” she said, noting a preference for back-fin from the J.M. Clayton crab house in Cambridge, where she lived for four years. “I then sprinkle Old Bay instead of paprika on the finished eggs and top each egg with a generous pinch of the crab meat.”

Mama Zannino, however, prefers what MiMi calls “the pure recipe – hers . . . so I make both.”

MiMi was so moved by the memory of the delicacy within her large, close-knit family that she composed an ode to deviled eggs in honor of her mother, Maria.

“ANGEL FOOD”
A golden globe lives within this
white oval casing, but if you slice
the shelled whole from pointy end to its
wider bottom, an open-heart lies
cupped in two less-than-perfect halves.

Admire this hard-boiled miracle, then lift
one half and press your thumb lightly
on its back until the half-heart tumbles
into a bowl soon filled with a dozen
other crumbled yolks.

As you crush the soft golden flesh
begin to douse it with mayonnaise, a
touch of mustard, a splash of
Worcestershire, a dash of salt and pepper.
Hand-whip it, then dip your finger

into its center. If it sticks, raise that digit to
your wagging tongue and test what you have
created from all these broken hearts.
Scoop and fill the fleshy white cups with
your golden concoction. Now split a

pimento-stuffed olive and press it like
a belly-button onto each golden mound.
Sprinkle this plated wheel of deviled eggs
with paprika, fill the gaps between with fresh
parsley . . . offer it from the bottom of your heart. 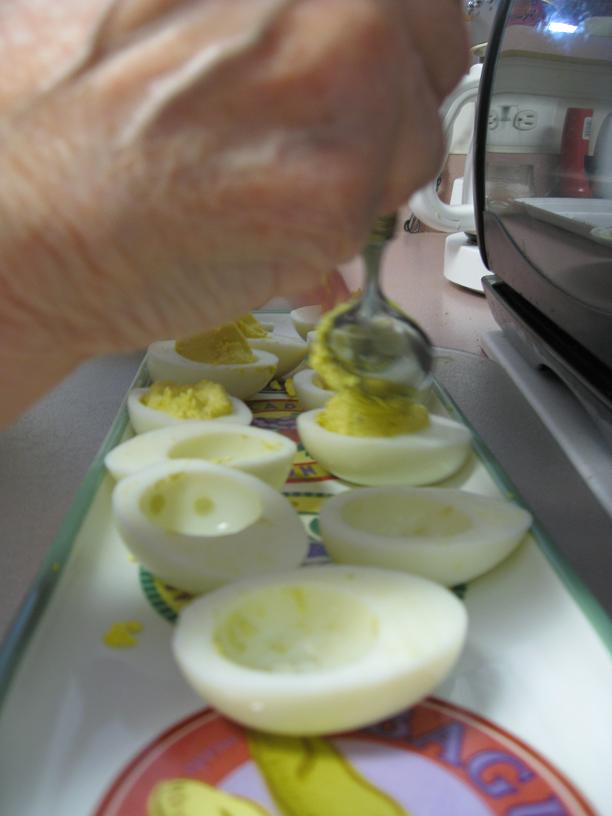 By nature, I am not a deviled egg man
But I have learned to eat them like oysters, one gulp and gone.

My ex-wife’s family was dominated by good Germans, hearty eaters all.
They loved heavy food. Her mother, Irish as Paddy’s Pig, was, oddly enough, a good cook.

She somehow adapted to the German way.
It was there, in the ample bosom of her food loving family that I was introduced to
the delights of that ovoid delicacy,
the deviled egg.

I like a simple mayo-whipped yolk and a dash of paprika
And [because] deviled eggs are an outdoor summer treat, they are best kept chilled.

I approach deviled eggs cautiously, especially at potluck cookouts
For I have a unfounded fear of mayonnaise gone bad.

– Rafael Alvarez can be reached via diablo@alvarezfiction.com