For a few minutes this morning, the Board of Estimates meeting went off-script.

A man known for his few words and sphinx-like demeanor on the board, Young spoke vehemently after Rawlings-Blake read a prepared statemen about her plan to “grow our city and create new opportunities for kids” by giving obsolete and often dilapidated rec centers to private operators. (See mayor’s statement below.)

In her statement, Rawlings-Blake cited Young’s words about public-private partnerships, given at the swearing-in of the new City Council, which implied that Young was behind her rec center plan.

Young had earlier expressed misgivings about her plan, but today he seemed livid.

Sitting next to the mayor, he began, “I am not against partners. What I am against is giving over control [to private parties] of a function that is the city’s responsibility.”

Speaking largely off-the-cuff, Young called the mayor’s plan “absurd” and stated that turning over rec centers to private parties “is a failure of the city to do its charter responsibilities.”

Near the end of his outburst, he said in a low voice apparently aimed for the mayor’s ear: “It didn’t have to be this way.”

The board then voted 4-1 in favor of turning over Brooklyn O’Malley, Collington Square, Easterwood and Lillian Jones to three nonprofit groups (see here for details). 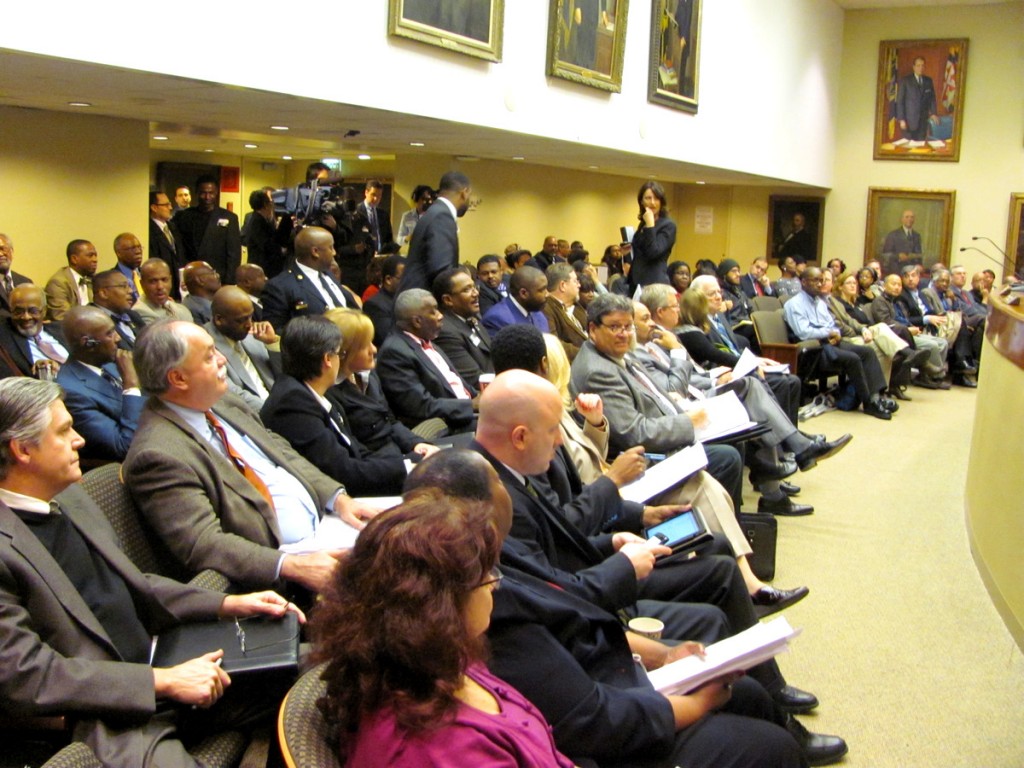 An unusually large audience attended the BOE meeting today, sitting quietly beneath the portraits of past Baltimore mayors. (Photo by Mark Reutter)

Mayor Rawlings-Blake was listed as abstaining from voting on the bid by the Omega Foundation to run the Easterwood Center. Usually, a board member abstains when there is a potential conflict of interest or other ethics issue.

However after her statement, she said she was so enthusiastic about the “Omega men” that she would be “bold” and vote in favor of their Easterwood bid.

Pratt said she was a proud product of the Chick Webb center in East Baltimore, but was “willing to try this [new] approach.” She added, “The children in these communities need to be in a safe haven.”

First, I want to thank these new and committed community partners for stepping up and joining the fight to grow our City and create new opportunities for kids.

This has not been an easy process for anyone – it has never been done before in Baltimore.

This is a new and bold step forward for the City and we need to make sure the process is inclusive and deliberative and that we get it right. Rather than act hastily.

But here’s the real truth that needs to be said and I will not or sugarcoat it.

Keeping the status quo – dilapidated buildings, depleted staffing and programming – is not an option, the kids can’t afford it and neither can we.

We need to make Baltimore more attractive for families to STAY HERE and move here. The status quo will not help us grow the city and keep families from MOVING AWAY.

That’s why our plan invests in building:

• and adds new staffing, programming and hours to 16 centers.

These actions will make our centers more attractive to families, will increase attendance and create real assets in the community. And, if we are honest with ourselves, we know that keeping the status quo does not.

In order to make this a reality, we need new community partners like the ones who have stepped up today to support other centers. And we will do everything  we can to assist them.

In these tough times, new and innovative partnerships are critical. And, I appreciate that the City Council voted to support new partnerships by approving the budget last July.

And as the Council President said during the swearing in: “Through partnerships  as varied as the vibrant neighborhoods that give life to our great city, we’ve been able to provide services and opportunities for the bright minds of tomorrow. . . Working together with residents, the private sector and our partners from neighboring jurisdictions, we’ve helped set Baltimore on a path to recovery. But let’s be honest: we’ve only just begun. Ahead of us lies some extremely difficult work still to be do. . .”

AND this recreation center plan is bold, innovative but not without tough choices –

But in the end, it’s the right thing to do for kids and for Baltimore.

The recreation center problem has been ignored by politicians for too long.

It’s time to act as statesmen and women, looking at the bigger pitcher, and doing what’s right for the long term future of our city.

We won’t put our heads in the sand and pretend the status quo is acceptable.

That’s why we created a Task Force of community leaders and a new plan to address the issue, and improve facilities, staffing and programs.

With the community, we did an unprecedented comprehensive audit of all centers and programs and now we have a new way forward –

• We know what’s wrong and broken and what needs fixing.

• We know what works and what must be strengthened.

• We will do what is reasonable to keep centers open . . .

. . . but, we are not going to pretend, for example, that 3 rec centers in poor condition, with too few staff and programing, is better than 2 good well-run community centers.

That’s wrong, and is not what’s best over the long run.

So again, I want to thank these new community partners for stepping up for Baltimore. We need more like you.

And I have ordered the Department of Recreation to continue to building community partnerships for Recreation Centers.

In that vein, a second round of Request for Proposals (RFP) for management and operation of Baltimore City recreation centers has been posted and is now available for interested non-profits and community-based groups at www.baltimorecitibuy.org.

I’ve assigned Recreation and Parks to work with potential bidders to help them fully understand the bid process and requirements.

To help prospective operators, pre-proposal workshops were held Dec. 13 and 15 at BCRP headquarters. More than 30 potential vendors were in attendance. The deadline for submitting the RFP is Jan. 25, 2012, 11 a.m.

I voted against putting recreation centers in the control of nonprofit groups because I firmly believe that providing recreation opportunities is a function of city government and should not be farmed out to other organizations.

Our recreation centers keep kids safe, healthy and off the streets, and it’s our responsibility to protect the interests of our children and our communities.

The city charter says that the Department of Recreation and Parks has the duty to “establish, maintain, operate and control recreational facilities and activities for the people of Baltimore City, and to have charge and control of all such property and activities.”

Giving up control of these centers takes away our power to protect and provide for Baltimore’s youth.