Mayor Stephanie Rawlings-Blake has vowed to preserve the facade of the Read’s Drug Store on downtown’s west side and commemorate its role in the civil rights movement, but the city-owned building won’t get preservation love for many more months.

Most of the roof has collapsed and the floor joists have rotted from widespread moisture damage. Contractors aren’t expected, however, to install a temporary rubber “membrane” to seal the roof until late spring or, more likely, summer.

That’s because the work is being done under a standard city contract. This process requires months to prepare the contract, advertise for bids and slowly wind its way to the Board of Estimates for approval.

(UPDATE: Getting a roof on Read’s is going to be slower than we thought. Alfred H. Foxx, city director of public works, and an aide told us today that bid contracts typically take nine months to be processed and awarded. The Read’s bid is scheduled to be advertised next month, which would push back the roof contract’s approval by the BOE to fall 2012.)

Right now, the building smells. The musty odor of mold wafts out of a gap where swollen plywood boards cover the first-floor window and a former entrance on Howard Street.

Bricks in some places are water-stained with rusty orange streaks. At least three of the upper-story windows were found hanging open on a recent frosty January day. 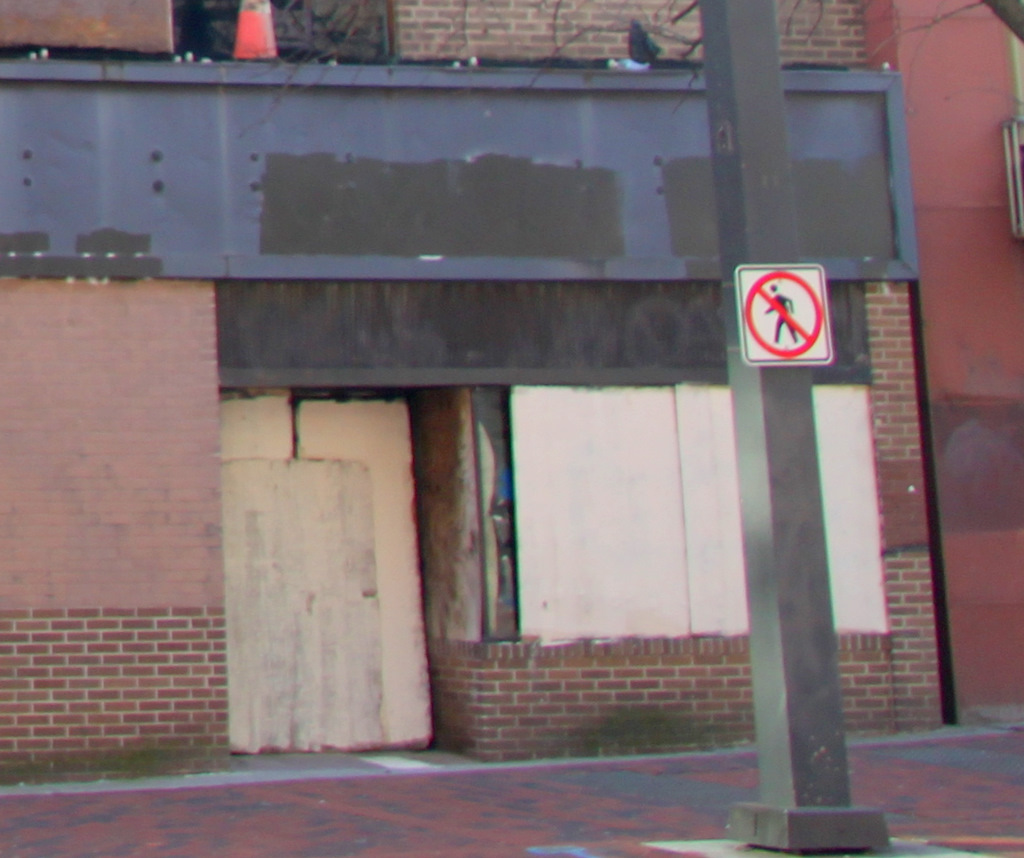 Phew! Mold vapors were wafting out on the Howard St. side of the Read's building a few days ago. (Photo by Fern Shen)

The mold smell is not surprising considering the assessment in a recent engineering consultant’s report that 80% of the building’s roof has failed.

All of the wood-framed floor levels, from the mezzanine to top floor, have caved in and are otherwise damaged by “long-term exposure to the elements,” the report said.

The interior is so hazardous that the consultant was not given access to the inside. Instead, his evaluation was based on photographs and a visual inspection of the building’s exterior.

Despite such damage, the Commission for Historical and Architectural Preservation (CHAP) was told last month that the structure was not in imminent danger of collapse because its outer brick walls “appear to be in fair condition” and its steel-beam framing is “in fair to good condition and stable.”

“We don’t want the building to fall down,” CHAP commissioner Robert C. Embry warned officials from the Baltimore Development Corp. (BDC), which manages the site for the city.

Larry Gibson, another member of the preservation panel who spoke at the meeting, described the current state of the building as “an absolute, complete case of demolition by neglect.”

Tyler Gearhart, executive director of Preservation Maryland, said stabilization “should be done immediately” by the city rather than letting the building deteriorate through another winter.

Read’s is part of the so-called “Superblock” where a city-backed $150 million apartment-retail project has been the subject of legal disputes for the last six years. In his presentation to the panel, M.J. “Jay” Brodie, president of the BDC, blamed the lawsuits for tying the city’s hands.

Gearhart disagreed, saying the city is using the lawsuits as a cover to disguise its own mismanagement of the site.

“The city condemned and acquired Read’s and other historic buildings in the Superblock, leaving them vacant and Lexington Street virtually abandoned,” Gearhart said yesterday.

“Regrettably, the selected developer has yet to produce a viable plan and the block continues to be demolished by neglect.”

At its last meeting, the Board of Estimates unanimously approved extending the city’s land disposition agreement with Lexington Square Partners, Superblock’s developers, from Dec. 31, 2011 to April 30, 2012.

Read’s has also been the subject of controversy because of its unique social history. A 1955 sit-in by Morgan State students eventually forced the drugstore chain to desegregate its lunch counters.

The demonstration is considered one of the earliest national examples of a peaceful civil rights sit-in and a seminal moment for Baltimore’s black community.

The developer’s original plan to demolish the building brought protests by some of the original participants in the action, as well as students and others.

Last May, Rawlings-Blake brokered a plan by which the two outer walls of the building would be preserved (except for the ground floor, which would be redesigned to meet shopping-mall-type display standards). 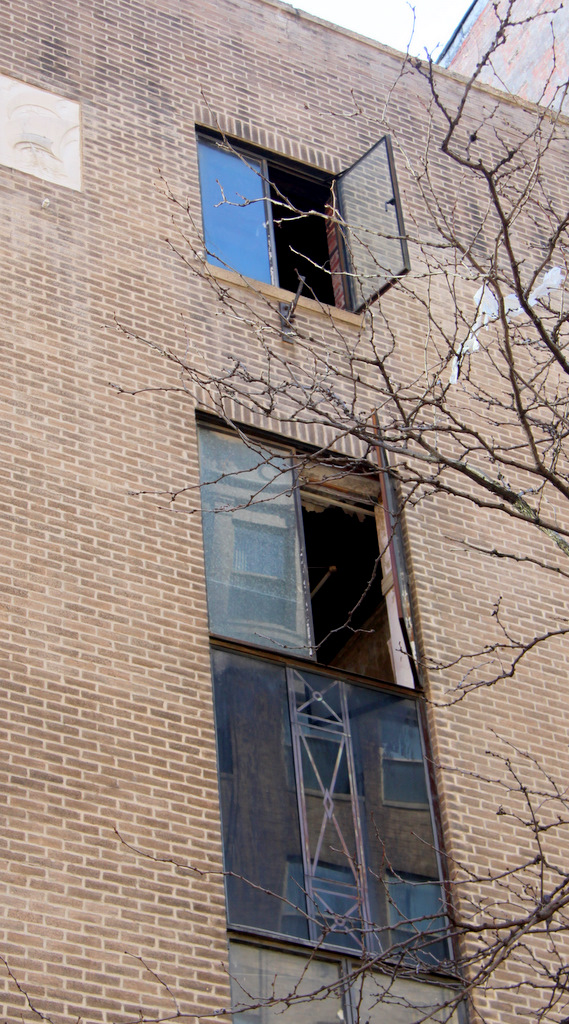 Several windows on the Read's building are open to the elements. (Photo by Fern Shen)

The proposal was approved by CHAP, but not without vocal opposition by preservationists like Gearhart, who said it violated a 2001 agreement between the city and Maryland Historical Trust, and Helena Hicks, a CHAP commissioner who participated in the 1955 sit-in.

In November, the mayor appointed a committee of religious leaders, academics and others to develop a plan for commemorating the sit-in.

The absence of civil rights activists on the committee prompted criticism by Hicks and others that their proposals for honoring the site were being ignored.

The committee’s report was handed over to the Mayor on Dec. 6.  The Brew has repeatedly requested a copy of the report, but it has not been released or publicly discussed by the mayor or her staff. 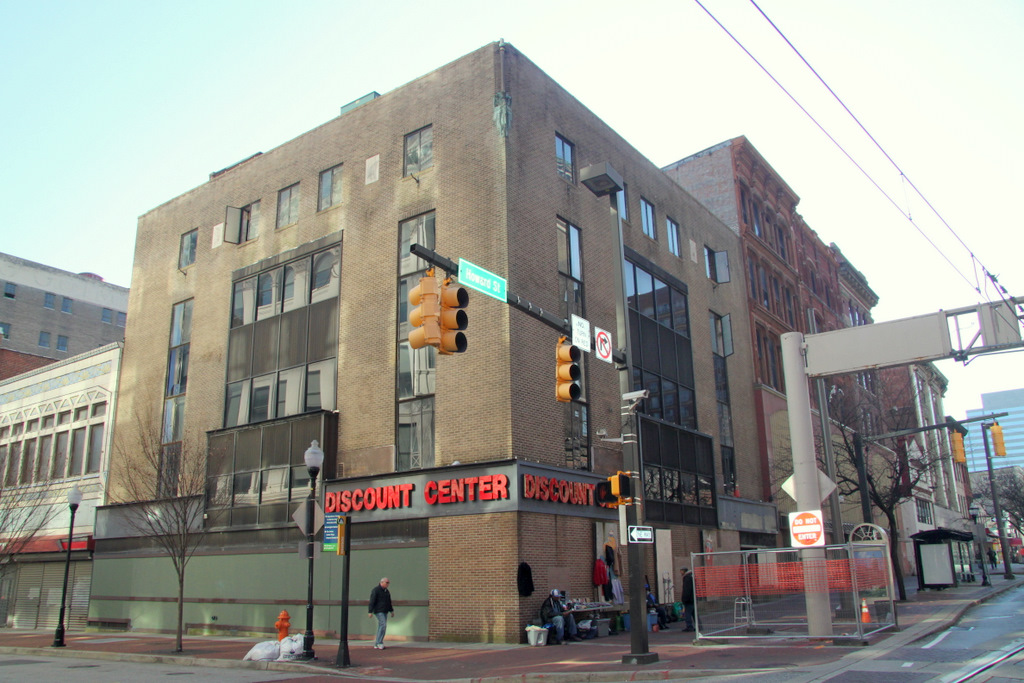 The building at Lexington and Howard streets – once the busiest retail corner of Baltimore – seen last Saturday. (Photo by Fern Shen)