Did two college presidents try to kill a bike lane proposed for the stretch of Mount Royal Avenue that runs right through their campuses? And have angry Baltimore cyclists and students, with their emails, phone calls and petition campaign, saved the lane for now?

Answering “yes” to both questions might be going too far, but it’s safe to say the heads of the University of Baltimore and Maryland Institute College of Art have been, behind-the-scenes, pumping the brakes on the idea of a dedicated bike lane that would take away one of the two lanes of vehicular traffic.

“I think it is awful that the leaders of two universities would reject a plan for bike lanes in their neighborhood when university communities are filled with young, potentially car-less students in need of efficient and safe transportation choices like biking,” said Mount Royal Ave. resident Jeremy Schroeder, in an email to The Brew.

“I’ve been sideswiped by trucks and almost hit by cars,” MICA student and avid bicyclist Liam Quigley said, in a phone interview. 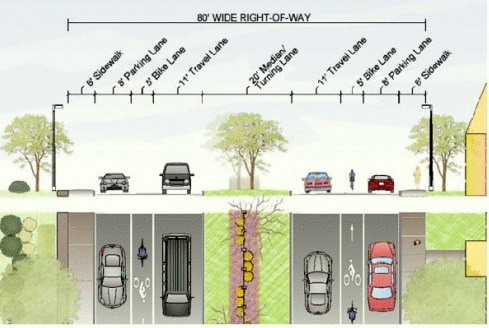 "Alternative B," a dedicated bike lane in between parked cars and a single lane of traffic. (Source: Baltimore DOT)

Quigley is one of 396 people who have signed an online petition asking for the lane to be included in the city’s ongoing Midtown Streetscape redesign project.

Lane supporters have been out on Mount Royal gathering more signatures and plastering bulletin boards with urgent messages about the effort.

Signers can leave a comment. Shane Townsend’s was one of the more pointed: “Cyclists are getting killed by Baltimore’s poor planning.”

“The students want a bike lane,” Quigley said. “They know it would increase safety to have them.”

The uproar was touched off last month when the local bike blog Baltimore Velo published a post saying that a representative of the city Department of Transportation told a January meeting of the Mayor’s Bicycle Advisory Committee that the lane is not going to happen because MICA President Fred Lazarus IV and UB President Robert L. Bogomolny do not want it.

Asked by The Brew if this is true and whether they support or oppose a bike lane, the answers from both MICA and UB did not address the Velo post, were non-committal on bike lanes and stressed the two schools’ general commitment to making Mount Royal safe for all who use it.

“Unfortunately, MICA faculty and students have been hit by cars; in fact, one of our students was killed by a speeding driver. In addition, cyclists have also been victims,” Lazarus wrote in an email. “Our goal is to find solutions that result in the increased safety for pedestrians and cyclists.”

Both he and Bogomolny point to the city as the lead decision-maker on the issue.

“We are open to any plan that contributes to the safety and well-being of our community,” according to a statement from Bogomolny’s office. “It is appropriate that experts in the Baltimore City Department of Transportation study and recommend how best to implement safe pathways for pedestrians and bicyclists in our area.”

So what does the city say?

DOT officials agreed to a short conference call with The Brew to explain why the bike lane is problematic. (Planning documents now show the preferred option to be one in which two vehicular traffic lanes are maintained, with sharrows added.)

But, first, they wanted to clear up what they said is a misconception by bicyclists about “complete streets.”

Bicycling advocates have been saying that, by dropping the dedicated bike lane, DOT is in violation of the complete streets legislation the City Council adopted in 2010.

The main idea of complete streets is that roads should be designed not just for cars but for all users in mind – bicyclists, public transportation vehicles and riders, and pedestrians of all ages and abilities.

But Theo Ngongang, division chief for planning at DOT, pointed out that the council’s vote was “only a resolution, not an ordinance – it doesn’t have the power of law.”

So while the city is advised by Council Bill 00-0433 to consider things like bike lanes, Ngongang said, they are not compelled in every instance to create them.

“Hopefully they’ll be compelled by hundreds of signatures and students showing up at mass meetings,” Quigley said dryly.

The bike lane proposal was part of what is described in a Midtown Streetscape Transition Report as a four-year, $6-million project to improve the city’s cultural district, encompassing not only UB and MICA but the Lyric Opera House, the Meyerhoff Symphony Hall and other institutions. The improvements include intersections, traffic signals, signage, curbs, streetlights, road surfaces and other features. 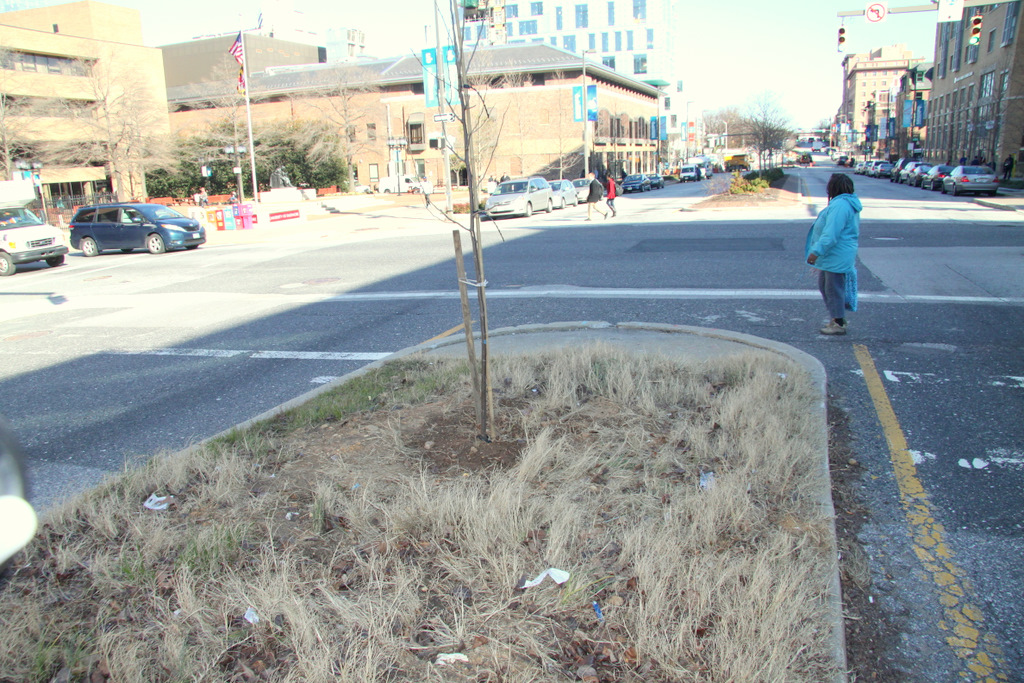 Mount Royal median near the UB campus could stand some attention. (Photo by Fern Shen)

Documents show there have been meetings (including charrettes and a “contractor kickoff”) going back to 2008, but Ngongang said the project is only about 60% designed.

“The final design is yet to be completed, things are still happening,” he said this week.

So does that mean a bike lane is still on the table? The answer, it seems, is possibly.

“We have been going back and forth on it,” he said, explaining that the problem is fitting the lane in.

“Some sections [of the available roadway] are narrower than others and some medians are wider than others,” he said.

“Throughout the length of Mount Royal between Charles [Street] and North Avenue we have clearly identified a bike lane, but it wouldn’t be a continuous bike lane,” he said. Ngongang described a possible bike lane route “that would be leading into the sidewalk” in places and then return to the roadway.

Other bike lanes in Baltimore do have this on-again, off-again feature. On the West University Pkwy. bike lane, for instance, between Tudor Arms Ave. and San Martin Drive where there’s a bridge over Stony Run, the dedicated bike lane disappears.

Ditto on St. Paul St. below Lanvale St. where congestion from the Bolt Bus stop and taxis queued up at Penn Station becomes intense.

Ngongang promised to send photos and might have explained this further, but The Brew asked a question that caused the DOT spokesperson monitoring the conversation to put the conference call on hold: “What has the position of the MICA presidents been and are reports correct that they have problems with the bike lane?”

“We’re going to have to cut this [interview] short,” said the DOT’s Kathy Chopper, after the two city officials came back on the line.

“As a MICA alumni, I’m struck by what comes off as an out-of-touch, behind-the-times position taken by a president of a school that prides itself on being forward-thinking and on the edge,” petition signer Michael Gunn wrote.

Rumors are running rampant that, as Quigley put it, “affluent influential Bolton Hill residents” have pressured the school.

A MICA spokesman, Cedric Mobley, tried to explain some of Lazarus’ concerns about bike lanes.

“He looked at everything on the table . . . and what adding a bike lane would do to reduce the capacity of the road to handle vehicles, and what affect that might have on reducing the pedestrians’ safety,” Mobley said. In other words, he added, Lazarus wants to make sure that Mount Royal, narrowed to one lane for cars, “would still be able to accommodate growing traffic.”

Asked if Lazarus thinks traffic on Mount Royal is growing Mobley demurred: “I’m not saying that.”

In a 2008 mini-charrette, according to DOT documents, Lazarus’ group concluded: “Mt. Royal back-ups no longer a problem (they were 25 years ago): people driving too fast is a problem.”

Mobley said Lazarus “is listening to his students” and that the plan for Mount Royal at this point “is not concrete.” They’ll have a chance to to air their views at a Feb. 15 MICA Town Hall meeting at 2:30 p.m., at the main building at 1300 Mt. Royal.

A post on Baltimore Velo about the meeting urged people to “wear shirts, hold helmets or somehow identify themselves.”

Cars, Bikes and Thousands of Students

On a recent morning, at rush hour, Mount Royal was abuzz with cars coming off the I-83 exit ramp, pedestrians carrying briefcases and painted canvases, bicyclists walking and riding their bikes and a truck for a work crew spreading mulch at the light rail stop.

The area serves more than 7,300 students and 700 faculty members, according to the DOT Midtown Streetscape report. MICA security personnel were stationed at intersections to help cyclists and pedestrians get across Mount Royal.

There weren’t any back-ups this day but when the lights let bursts of cars through, some of them veered far to the right, forcing several cyclists we saw to within a foot of parked cars.

A MICA student, who had just locked his bike to a rack, said swinging doors and veering cars have been a problem.

“I’ve almost gotten ‘doored.’ I’ve had some close calls,” said Walt McCreary. “So many people, when they’re driving, just fly into their parking spot without looking.”

McCreary, who said he sold his car and just uses his bike to get to classes, hadn’t heard that a bike lane was being considered but he said he favors the idea.