Would Baltimore City Hall reject the lowest bidder of a $1 million-plus contract on a technicality, then allow a higher bidder with a more significant flaw to win the award?

That’s what happened today when the Board of Estimates rejected a low bid because a single number was missing from a document, but accepted a higher bid whose “non-compliance” with Maryland tax authorities was deemed correctable.

As a result, a veteran local contractor (Potts & Callahan) won the contract, a newcomer from Washington, D.C., learned a lesson about Baltimore contracting, and taxpayers will fork out an added $169,407 for the demolition of the ex-Greyhound bus station on Baltimore’s West Side.

Goel Services’ low bid of $1,057,593 to tear down the bus station was deemed unacceptable by the city’s Minority and Women’s Business Opportunity Office (MWBOO) because it failed to include the exact dollar amount assigned to a minority subcontractor on a bid document.

Instead, the company – a federal contractor that only recently began bidding in Baltimore – included the percentage of the total award.

Simple multiplication would have permitted MWBOO to do the math and fill in the blank. But such work is not within the purview of the office, and the omission constituted “a material defect on a [minority] goal,” Thomas B. Corey, MWBOO director, told the spending board.

Thus the contract went to the next lowest bidder, Potts & Callahan, even though its bid also violated rules administered by MWBOO.

Specifically, Potts & Callahan’s minority subcontractor, Page Technologies Inc., was “not in good standing” with the Maryland Department of Assessments and Taxation, MWBOO concluded, according to the written agenda reviewed by The Brew.

Typically, “not in good standing” means a company owes taxes to the state.

But after making that determination, MWBOO ruled that Potts & Callahan “will be allowed to substitute an approved MBE [minority business enterprise] if Page Technologies Inc. is not in good standing at the time of the award.” 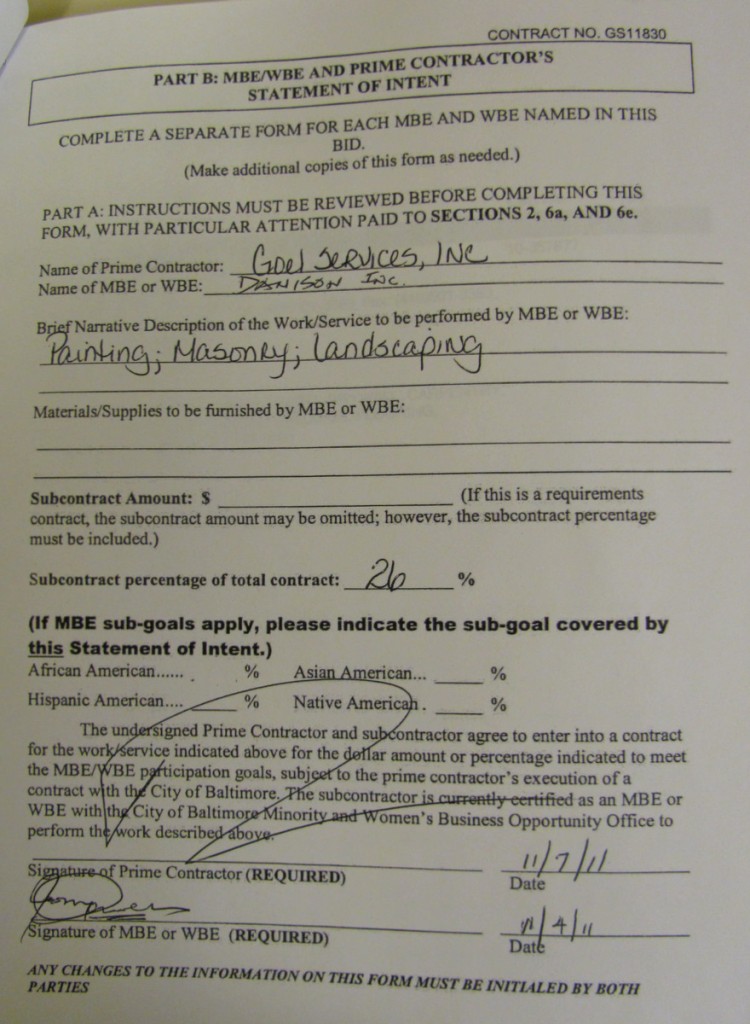 Low bidder Goel was disqualified for not including the "Subcontract Amount $" in his bid. It only included the subcontract percentage of total contract. (Photo by Mark Reutter)

In other words, Potts & Callahan can change its minority contractor, rather than be disqualified for presenting an out-of-compliance contractor.

Piyush J. Goel lodged a protest before the spending board. He said the problem with his company’s bid could have been fixed “by a two-minute call” to his office.

MWBOO’s Corey countered that there were no exceptions to the rule that both the percentage and exact amount of dollars to be assigned to a minority contractor be disclosed on the document, “Part B: MBE/WBE and Prime Contractor’s Statement of Intent.”

Goel asked the board to approve his bid contingent upon his compliance with minority goals, which he said he fully intended to honor.

But City Solicitor George Nilson told Goel that rules are rules. While not wanting to spend money unnecessarily, Nilson recommended that the board accept MWBOO’s findings and reject the protest. (MWBOO is part of the City Solicitor’s office.)

Mayor Stephanie Rawlings-Blake, Comptroller Joan Pratt and City Council President Bernard C. “Jack” Young did not comment as to their reasons for rejecting the protest.

The contract involves demolition of the vacant, five-story Greyhound station on West Fayette Street. The structure is on the Superblock site where the city has condemned all of the buildings on a large block centered at Lexington and Howard streets.

Calling Superblock a top priority of her administration, Rawlings-Blake and other members of the spending board recently approved the third extension of a land disposition agreement with Lexington Square Partners, the developers of the site.

The city’s demolition of the Greyhound station will save the developers the trouble and cost of tearing down the building, which is slated to be replaced by an apartment tower. 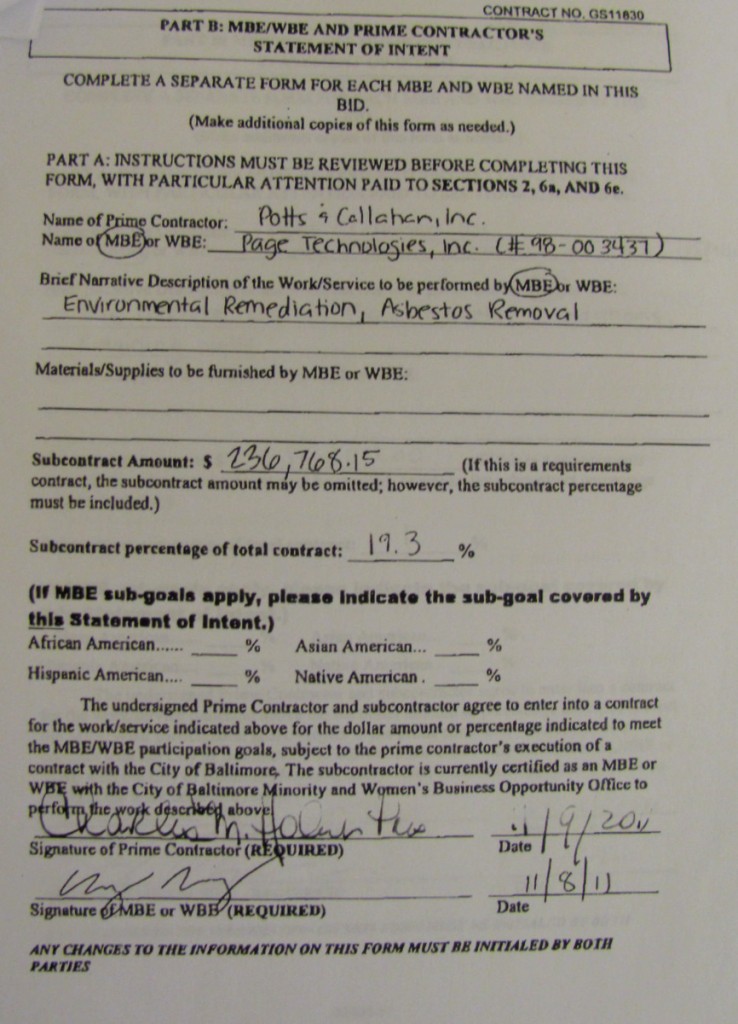 Potts & Callahan included the subcontract dollar amount. However, the subcontractor Page Technologies is "not in good standing" with the state. (Photo by Mark Reutter)

M.J. “Jay” Brodie, head of the Baltimore Development Committee (BDC), said the cost of the Greyhound demolition will be factored into the price that Lexington Square Partners will pay for the land, if the deal is completed.

The Brew has been documenting the at times seemingly arbitrary actions of MWBOO under the leadership of Shirley A. Williams (here and here). Corey was named the office’s chief following Williams’ retirement last month.

A 12-year veteran of city government, Corey served as MWBOO chief for a short period when Williams was deputy director of the Department of Public Works.

Most recently, Corey was the senior counsel of the city’s employee pension systems.

Today marked his first appearance before the board in his new capacity. His return elicited a hearty “Welcome back, Mr. Corey!” by Rawlings-Blake after he finished his presentation.