It’s been a big week for the Charm City Circulator, the city’s free bus service.

On the heels of Mayor Stephanie Rawlings-Blake’s proposal yesterday to bring Circulator service north to Charles Village – but not until the fall of 2014, officials acknowledged today – the city will be extending a little-known Circulator route to Fort McHenry.

The Board of Estimates is expected to approve a plan tomorrow to use a $1.2 million grant from the Federal Transit Administration to buy up to four hybrid-electric buses to extend the Circulator to the Fort McHenry National Monument.

The new service differs from the three current routes (Purple, Orange and Green) not only because it won’t be funded by the city’s parking tax and general revenues, but because it is designed specifically for tourists coming to the 200 year anniversary of the War of 1812 and the Star-Spangled Banner.

Because the celebration begins June 13 with the “Star-Spangled Sailabration” – a flotilla of tall ships and navy vessels in the Inner Harbor – the new route needs to be up and running by then, according to Jamie Kendrick, deputy director of the city Department of Transportation.

On the other hand, due to the reconstruction of Charles Street between 25th and University Parkway, the Purple Route extension touted  by Rawlings-Blake during her State of the City address yesterday “will not occur until at least the fall of 2014,” Kendrick said.

The new Circulator, dubbed the “Banner Route,” will start downtown and run to Fort McHenry via Key Highway, Lawrence St. and Fort Ave., skirting the main population and business zones of South Baltimore. 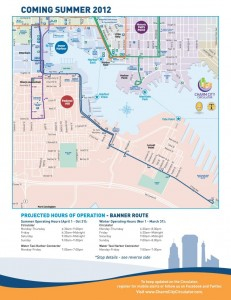 The bus service will be a limited three-year program, terminating upon the end of War of 1812 celebrations in the fall of 2014 and funded not just by the federal transit grant, but a Paul Sarbanes award designed to improve public transportation to national parks.

Banner Circulators will start at the corner of Light and Pratt streets and travel along the south side of the Inner Harbor past the Visionary Arts Museum, Harbor View and the Museum of Industry, before swinging inland to Fort Avenue, the only route to Fort McHenry.

There will be stops along the line, but their locations have not yet been determined, Kendrick said.

At a meeting about the new route covered by SouthBMore.com, several objections were voiced by residents, who saw the Circulator as an antidote to the difficult parking problems in Federal Hill, South Baltimore and Riverside.

Currently, only the Purple Circulator route travels into the community, but only as far as Ostend and Light streets.

The Banner Route would serve Locust Point, but not the expanding facilities built northward along the waterfront. Councilman William H. Cole IV questioned line’s distance from Tide Point and Under Armour, a major source of local employment.

That area is currently served by the city’s water taxi service to the Inner Harbor and Fells Point.

The free service would be largely duplicative of the Maryland Transit Administration’s No. 3 and 11 bus lines – which charge a $1.60 fare – and would mostly serve residents and commuters, not tourists.

Kendrick said his department is still working through an estimate of the cost of the Charles Village extension, but that the “order of magnitude” is between $700,000 and $900,000 a year, plus the cost of three new buses (about $1.5 million).

Interest in the new route – and criticism of the MTA’s existing service to the area – has been intense on The Brew’s website since the mayor’s announcement.

“Great, I can’t wait for it to be up and running,” said one commenter.

News that the Circulator won’t be in service for nearly three years is bound to be a disappointment to transit users and advocates.